That Map and an Alternative

fbb is not completely familiar with public transport in Cardiff, but comment writer Andrew is. He sent fbb the Cardiff Buses network map as an example of how it can be done. AAdesign style pioneered originally by Stagecoach, it offers a "simplified geographical" view of the network. The whole caboodle is too massive to fit into the confines of a blog but you will get the idea. 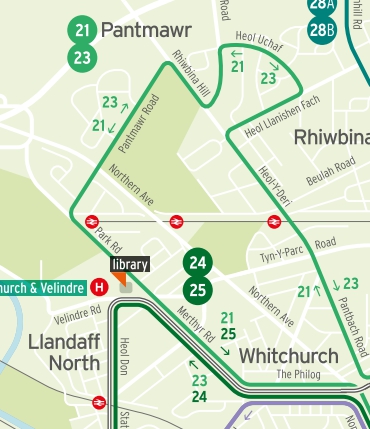 ... the Pantmawr circulars (21/23) and the Llandaff North circulars (24/25). Parts of the network are more complex and parts are frighteningly so ... 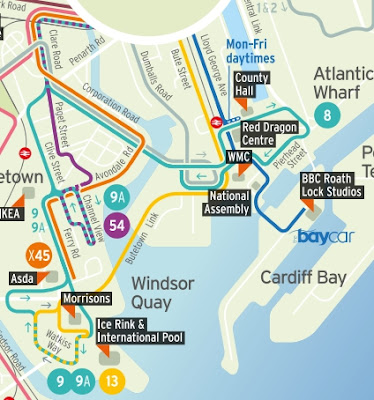 ... as here at Cardiff Bay. It has changed quite a bit in recent years! 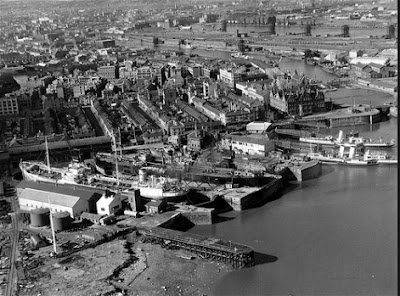 Less frequent routes are either shown in "hollow" lines or cross-referenced elsewhere. 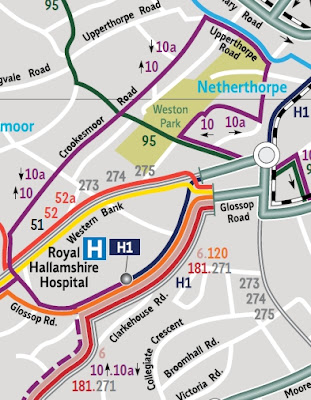 ... and Andrew assures fbb that the Cardiff map is correct; something of a novelty for Sheffield if you are foolish enough to use the fatally flawed "underground-style" joke map.

A Good Start to MetroBus

First Bristol's in-house newsletter reports enthusiastically on the first two weeks of free operation. fbb will be travelling to Bristol on Tuesday 12th, specifically to observe the ticket system as referred to above. He will also sample the M3 route and the new T1 to Thornbury.

It cannot be Monday because of his leadership of a church Bible study in the afternoon; likewise this has prevented your author from accepting an invitation to attend ...

The Salt Road Launch.
Yer what?

Why the Salt Road?

It’s believed the salt deposits at Droitwich were being exploited in the Iron Age, possibly earlier. Salt was a valuable resource in Roman times and the Romans came to Droitwich specifically for this.

Later, the Anglo-Saxons had furnaces to evaporate the salt on the banks of the River Salwarpe. King John granted the town a Royal Charter in 1215 because of its salt, and Droitwich became very prosperous in Medieval times.

The salt industry was industrialised and developed in the 19th century by John Corbett, who built nearby Chateau Impney ... 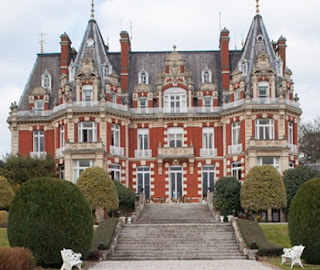 ... in the French château style for his wife and developed the town into a spa resort.

Naturally, the road leading to Birmingham in one direction and to the river at Worcester in the other became known as the Salt Road. 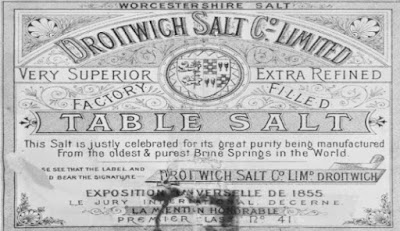 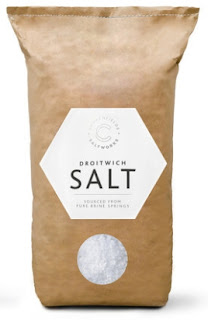 fbb has requested photos etc and will report fully when they arrive.

Railway Redoubling
Peterville Quarry Heritage Railway is currently undergoing refurbishment and repair after a grim winter. But, whilst fettling up, fbb is taking the opportunity of making a few changes. The "main line" that enters he tunnel is becoming double track.

This involves installing a crossover; two points joined together. 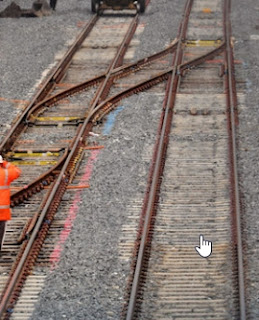 Railwaymen refer to the distance between the two rails as the "four foot" (actually 4'8½") and between two tracks as the "six foot" (distance varies). But if you join two points together (poor cobbled together picture) ... 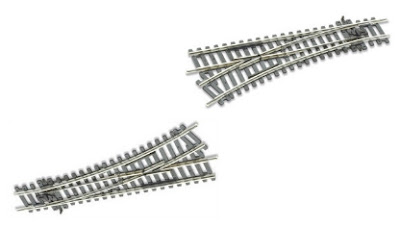 ... the tracks are too far apart! The "six foot" is nearer twelve. So fbb has to trim chunks off the pointwork (thus invalidating the guarantee). The bits to remove are those two sleepers at an angle on each curved rail. Very scary.

But it worked. The "six foot" is still a tad too wide but acceptable. 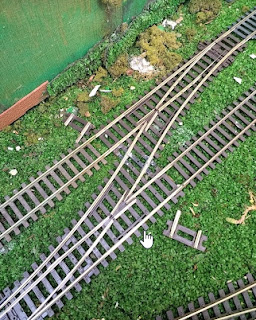 Note that the sleepers are now all parallel which is how they should be. The trimmed ends are shown for evidence.

Next problem is the J72 which keeps doing THIS:- 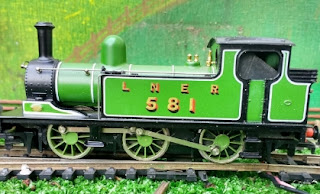 Doesn't look right, does it?

fbb remembers something similar happening to a fill-sized heritage steam loco near Durham a few years ago. Can fbb's loco be repaired?

Top Quality Timetable
Like the excellent Cardiff map (above) there are still a few superb timetable books available. First Kernow's plopped through fbb's letter box a few days ago. 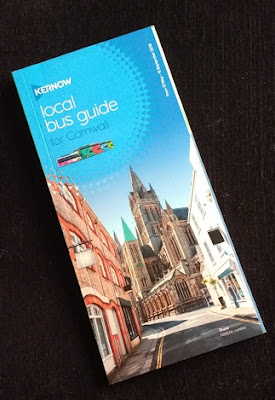 A detailed review is due later this week.