From time to time, fbb gets grief from comment writers for hankering after "the good old days". Many such critics of the old man seem oddly content to sit back and accept, with inevitable resignation, the decline of the bus industry.

That decline is not inevitable and Bristol proves it. 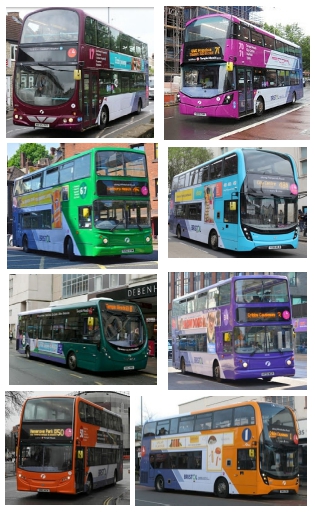 The city is a riot of omnibological pulchritude, has REDUCED fares, embraced technology and cries out "bus is best"!!

fbb's bipartite mission was to experience for himself the new service T1 to Thornbury and, most importantly have a go at Metrobus M3 and its technology.

In reverse order of the events, we begin with T1. Previously First ran two buses an hour along the busy Gloucester Road. The 78 diverted via the delights of Cribbs Causeway whilst the 79 stuck to the main road all the way. 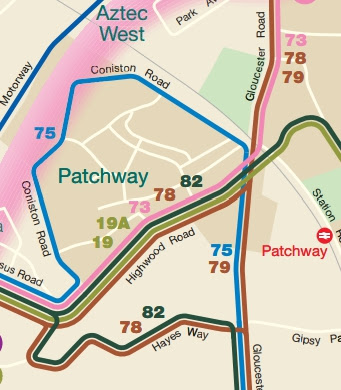 There was also a Stagecoach 77 which ventured into the "here be dragons" territory of housing splurge at Bradley Stoke, served by frequent (and pink) Bristol City route 73. 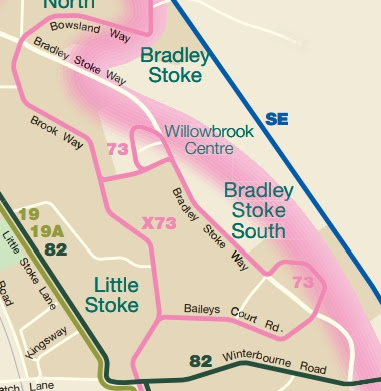 The 79 has been doubled in frequency and now runs as T1 via the M32 and the full length of Bradley Stoke Way. 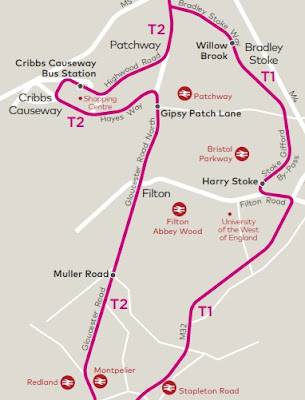 The T2 is a slightly re-jigged 78, still hourly.

So as 1315 approached, fbb presented himself to The Centre (which isn't) to find the T1 stand. First Bus drivers had no idea where to find it, and a couple of Bristolians, eager to help a slightly dishevelled and dispirited old man' directed him to the Bus Station "where Thornbury buses leave from,"

The T2 does, but the T1 doesn't. A panic prod at the phone produced the magic words Colston Street, but fbb could find no map at any stop which might guide him to this cunningly hidden location.

A further enquiry from a passer-by elicited guidance ... 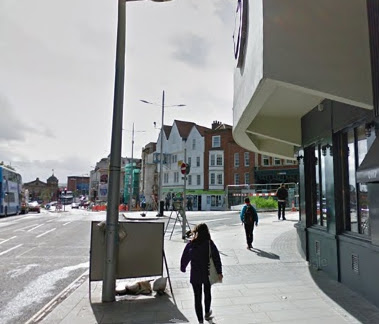 ... to a "back street" stop, round to the right, where, just in time, a wheezy fbb boarded. 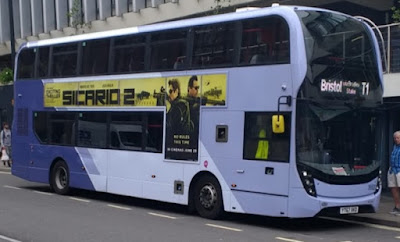 Loadings were very light with a grand total of FIVE boarding at the main city centre stops. Then followed a quick whizz up the M32 to the junction with the A4174. 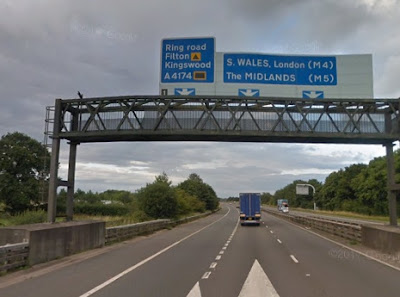 A short toddle westward brought the fbb vehicle to a right hand junction with a recently opened bit of super road. 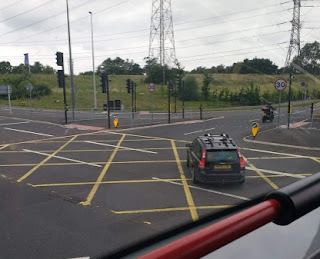 This curves through passenger-less open country until it joins Bradley Stoke Way. 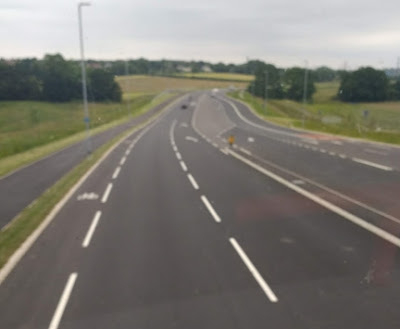 Here you also join the route of the long-promised Metrobus M1 (expected January 2019???) which will take a similar route to the T1 but will jiggle via the University of the West of England. On this Bradley Stoke section of the route the T1 will compete for passengers with the M1.

The Metrobus stops are still under construction ... 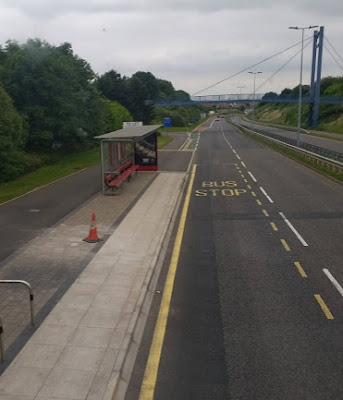 ... but fbb assumes that the T1 will share this infrastructure. Will the T1 (and the exisiting 73 on parts of he route) be included in the displays on the monoliths ... 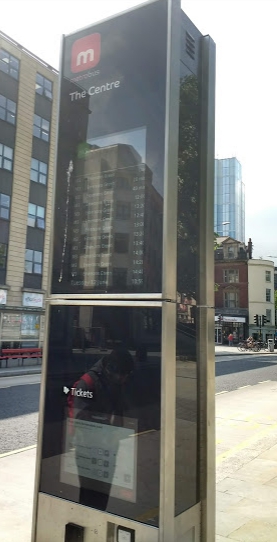 ... or will everything except the M1 be consigned to normality? 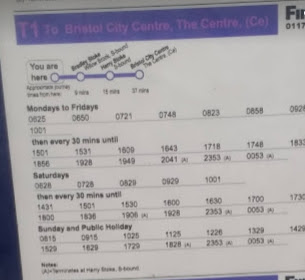 After a pleasant but uneventful ride, fbb alighted at Almondsbuty Swan ... 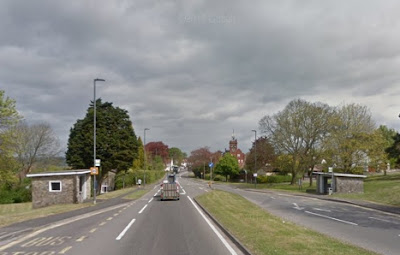 ... took his life into his hands and crossed the road to await the 1201 back to Bristol.

Again, passengers were sparse (5 in total) which made fbb wonder whether any printed publicity had been distributed in the Bradley Stoke area. The blog's Bristol correspondent, who lives in the area, reports that nothing has been seen, although peak time "commuter" loadings are growing.

Surely these leaflets should have been delivered house-to-house before the service started?

fbb understands that something is now in hand some three weeks after the service started. Likewise, there are buses with "South Glos Lynx" branding added ... 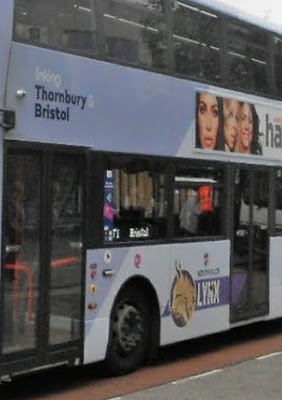 ... but both the fbb vehicles were plain and unlabelled. Disappointing.

What was impressive was the helpfulness of the drivers. On the return leg, two ladies from Eastern Europe boarded bound for the Airport, very unsure of where the T1 was going. They were expecting a 73! The ladies did know about the £8 fare being inclusive of a single journey into town ... 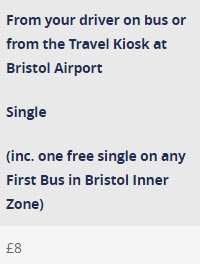 ... but needed guidance as to where to connect with the "Flyer" bus. 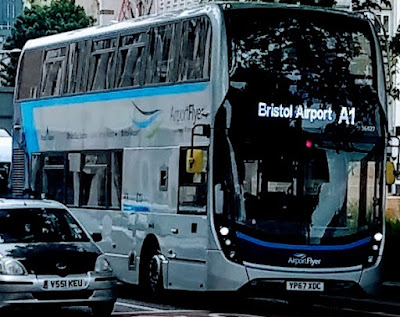 As our driver was ending his tour of duty near the bus station, he not only explained where it was, but offered to accompany the ladies there and deposit them at the correct stand.

The T1 ought to be a winner, emulating the much delayed Metrobus M1 over six months before the newbie might actually appear. Sadly, it would appear that publicity so far has been inadequate.

Tomorrow, at last, we get to ride on the M3!