The original plan was to spend a few days in Cornwall ... 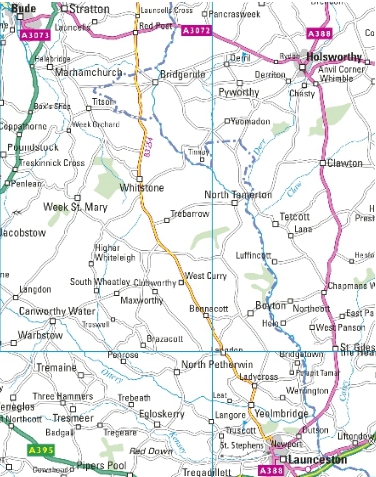 ... but B&B prices were a bit higher in the fbb's first choice, namely Bude. So Mrs fbb hit on Holsworthy or, more specifically Chilsworthy, a couple of miles to the north thereof - and still in Devon! The wiggly blue line on the map extract above marks the border. 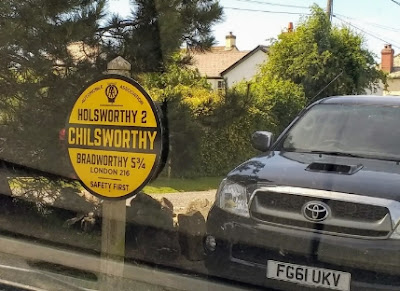 So yesterday, after a light breakfast (no cereal!) ... 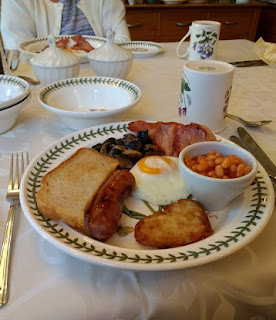 ... the fbb party sallied forth southbound to Launceston, thus crossing the border into furrin' parts, viz the Principality of Kernow. 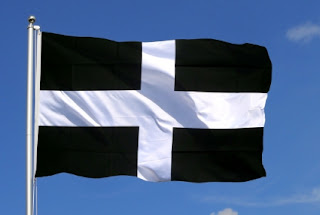 Saint Piran's Flag (Cornish: Baner Peran) is the flag of Cornwall,. The earliest known description of the flag as the Standard of Cornwall was written in 1838. It is used by Cornish people as a symbol of identity. It is a white cross on a black background.

The flag is attributed to Saint Piran, a 6th-century Cornish abbot. One early use of a white cross and black background design is the 15th-century coat of arms of the Saint-Peran family.

The border is crossed, of course, at the River Tamar ... 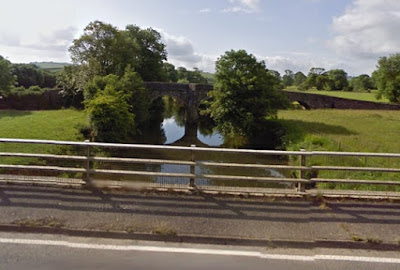 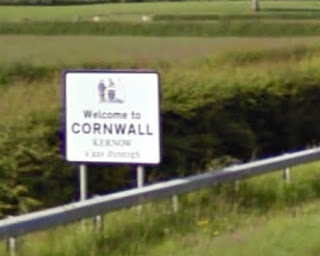 The more famous Tamar crossing at Plymouth is just a tiny bit bigger ... 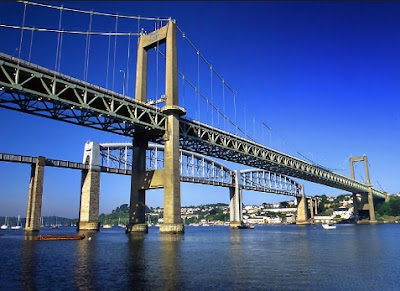 ... but still two bridges side by side; old and one a good few years newer.

It would be fair, fbb feels, to admit that Mrs fbb and chum Julia's enjoyment was not of the highest level. "All we saw," they opined, "was bushes!" 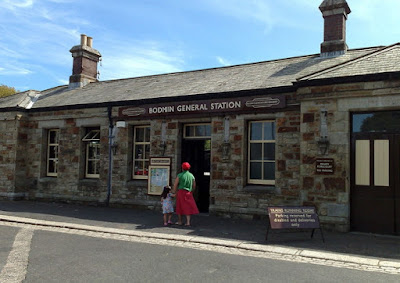 Bodmin General station was, they thought, "interesting" but less so the ride. fbb tried to enthuse over the GWR seats ... 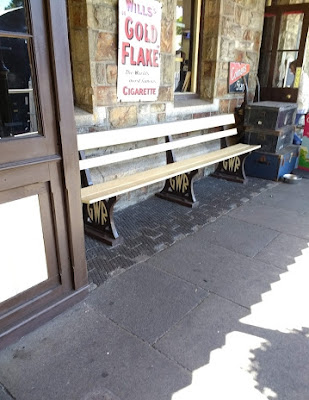 ... and the shiny milk churns. 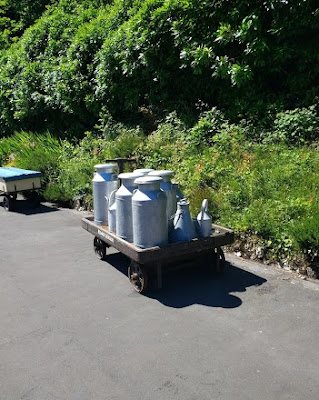 Also on view was a set of "genuine" (NOT) enamelled station signage ... 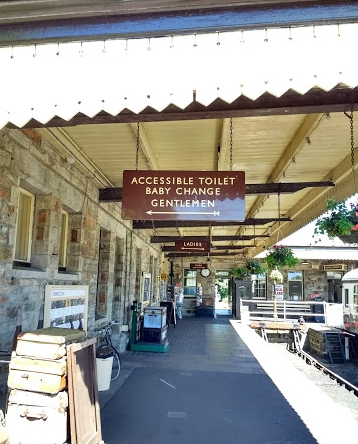 ... many of which would never have adorned any GWR station. He even feigned fake excitement at the GWR liveried modern dustbin! 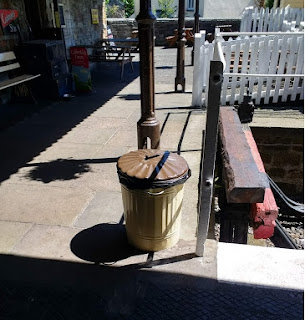 The train itself was standard fare for your day rover fare, fair enough ... 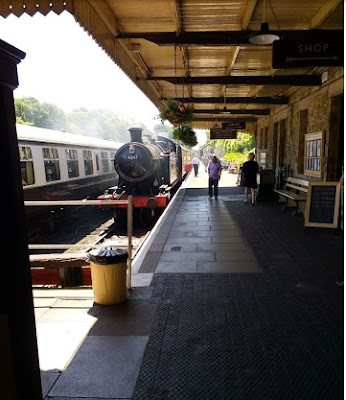 ... but it was no different from the train ridden on at the West Somerset Railway at Minehead.

This lack of boundless enthusiasm should not be taken as a criticism of the tireless efforts of the people who work so hard running the line and preserving its trains BUT provokes a broader question, "Are there too many heritage lines doing exactly the same thing?"

Answers on a postcard, please!

But, fortuitously, there was something different - but not directly derived from railway preservation.

As the fbb gang was waiting to board their ordinary Mark 1 British Railways coach, a party of World War 1 Tommies marched briskly down the hill from the Cornwall Regimental Museum! 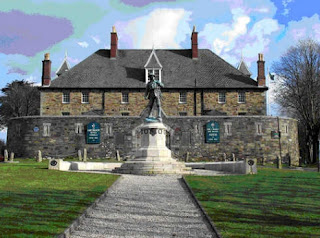 They all wore tin helmets and khaki capes ... 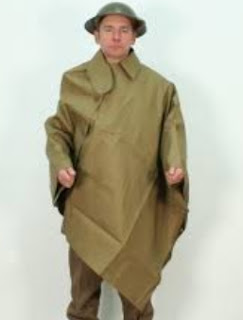 ... and carried "rifles" realistically made of wood. Sensibly, bayonets were not fixed, but the orders barked out by their commanding officers were nerve-tinglingly realistic. 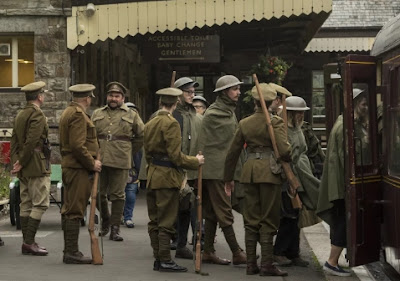 It was only when they marched on to the platform and in to a reserved coach on the 1230 to Bodmin Parkway that fbb twigged - too late to take detailed pictures.

Under the capes and tin hats were jeans, shorts and brightly coloured trainers. It was a party of school kiddies kidding on that they were off to the trenches. 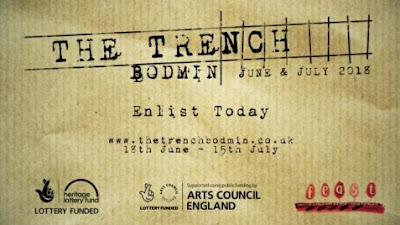 The train pulled to a halt short of Parkway Station where a small scaffolding platform had been built. 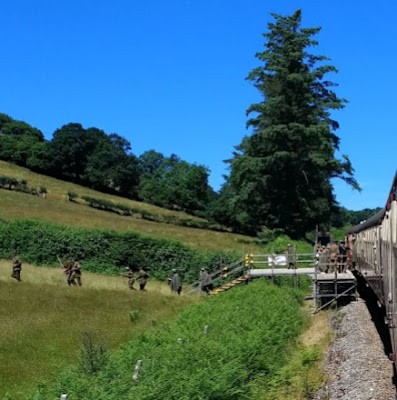 Off marched the "troops" across the field. 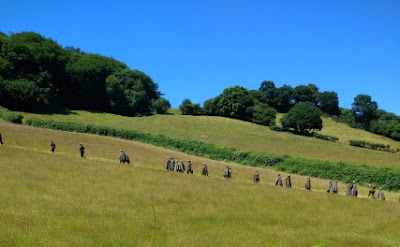 And there, behind the screens, would be a very realistic trench ... 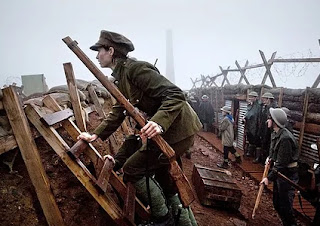 ... complete with smoke and explosions. Participants are warned! 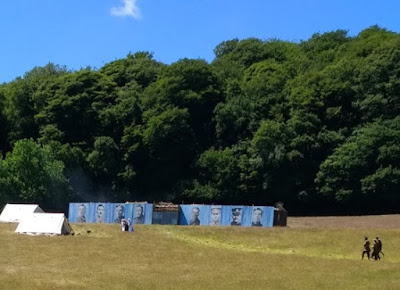 As the new recruits approach, two nurses appear, hauling a badly inured and bandaged casualty of "war" - very compelling and challenging. (just about visible in the picture above)

History lessons were never like this when fbb was nobbut a lad.

It would have been nice to have had a fuller explanation from a commentator. That would have made the trip much more memorable, albeit co-incidentally.

The general public can book up for a similar evening experience. Go on-line to "the trench bodmin".

fbb will write more about the line later in the week, this time from a rail enthusiast's perspective.

Next "you may have missed" blog : Sunday 24th June
Posted by fatbusbloke at 02:00