Diagram or Map? But it Should be RIGHT!

But first, especially for a pedantic anonymous from yesterday:-
MAP - a diagrammatic representation of an area of land or sea showing physical features, cities, roads, etc.
So, sniggering imperceptibly, we return to the new "underground style" MAP of selected Sheffield bus routes. 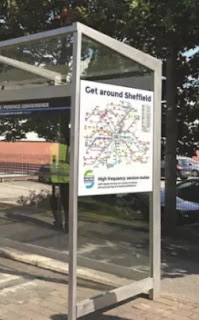 The wondrous Buses for Sheffield announced that this would help passengers find their way round the now-unified network and thy would be able to choose an appropriate interchange.

Leaving aside the fact that the network is no different, how does the new mapagram help with those pesky interchanges; at Firth Park, for example? 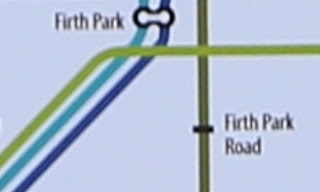 Sadly TSY's finest shows services 3/3a (every ten minutes - GREEN) as by-passing Firth Park, not calling at the interchange. Likewise, the 75/6 combo (every 6 Monday to Friday for 9 months, every 7/8 for three - MUD) avoids one of its main "traffic objectives"!

Moving in towards the city centre we may note that service 20 (RED) does NOT use Rock Street ... 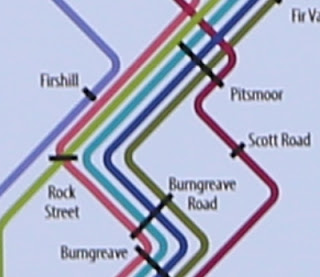 ... but the 83/83a (LILAC) does! Firshill should be "tagged" well away from the main road and we may wonder why we need Burngreace and Burngreave Road, effectively neighbouring stops!

Moving to the west we encounter the "Parson Cross" group of services. 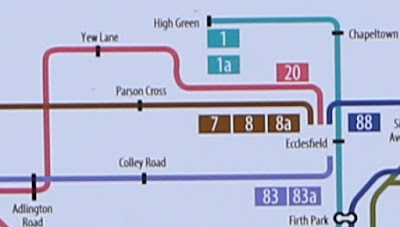 These were introduced post WW2 to serve a vast council estate on the north of the city. The development filled a huge area between Southey Green and Ecclesfield. 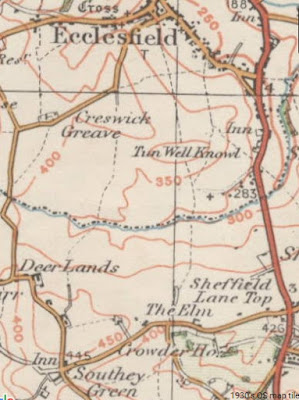 The spine roads run diagonally SW to NE and Sheffield Transport used the road names Wordsworth Avenue (now the 7/8 group - BROWN) and Yew Lane (20 - RED) as destinations. But the Colley Road route (83/83a - LILAC), the last to be introduced, showed the generic "Parson Cross". This was OK until a tram replacement also ran to "Parson Cross", but a completely different place.

Parson Cross, shown on the 7/8, is undoubtedly WRONG; to be helpful, that should read "Wordsworth Avenue".

Then there is Southey Green! 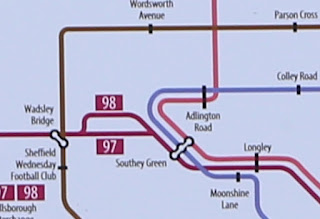 This is the worst example (of very many) where no pretence of geographical "matching" has been even attempted. Blog readers with a week or two to spare may like to while away their idle hours ... 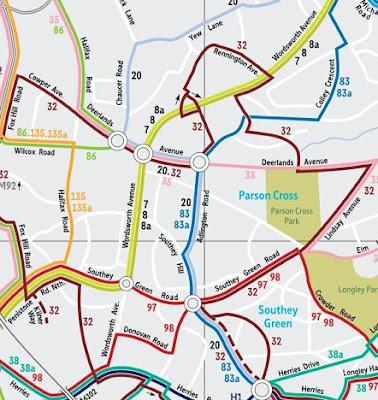 ... matching underground-style (NOT) with reality. As a starter, note that the BoS "diagram" has 97 and 98 (DEEP RED) on the wrong roads!

fbb's version of a simplified map (better description than "underground style") is  "work in progress" but here is the above area without proper "corners". It shows that it is possible to "do it proper good like". 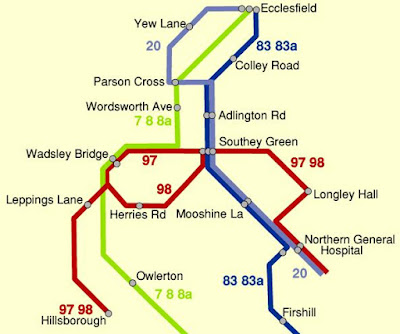 But, dear readers, you may be getting the idea. This map is badly designed and full of mistakes. As the legendary Harry Beck discovered, the job is far from easy. But he would never have been satisfied with misleading design and blatant errors! Here's another ... 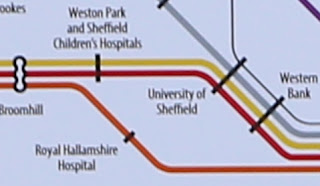 ...Western Bank should not be there! The University of Sheffield is served by FOUR stops, Durham Road TO city, Western Bank FROM City (51 YELLOW, 52 MAROON), Bolsover Street (95 GREY) and Glossop Road (120 - ORANGE), the latter being ignored! The 120 is the main route between the student village area and the Univrsity area - but TSY does not show the stop.

... note that the 52 (MAROON) DOES actually call at Walkley, which is where the two lines cross. Better to use "Tinker Lane" for the terminus and note that Commonside and Crookesmor are, effectively, the same place.

But fbb has left the most ghastly howler to the end.

The map is worse, far worse, in this area than fbb at first spotted. 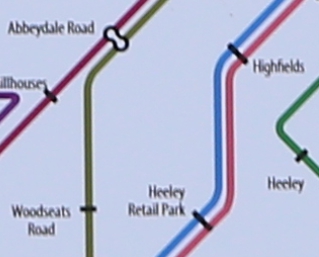 This chunk shows 20 (PINKISH) and 24/25 (BLUE) as they move towards the city centre from Heeley (NOT the Heeley on the green line which should be "Heeley Green").

There is no such place in Sheffield as HighfieldS - NO "s")

Out of courtesy, fbb contacted a senior manager at the PTE suggesting that the map should be withdrawn. He offered, out of desperation, to produce a correct version free of charge (T and C apply!).

The reply was, erm, "interesting"!!

Thank you for your email. The map was designed in house and was checked by all the partners for errors therefore I do not see any reason to withdraw it.

Thank you for your kind offer however we will be retaining the current version of this map.

A selection of mistakes has also now been sent. fbb awaits but does not expect a reply.

Back to sanity tomorrow.