Pathetic Print Provision
Yesterday fbb "scooped" a story from a Sheffield bus manager passed on by a responsible bus watcher. It challenged the motives behind the much extended service reductions, claimed to be provoked by the mass exodus of students. One Sheffield resident and a regular correspondent to this blog is equally uneasy. The piece above also hints at poor publicity.

fbb's "informant" also quizzed "the management" about printed publicity. He was right to do so as, although the "reduced" (sorry - "revised") timetables are on the Travel South Yorkshire web site as non-leaflets, there is nothing to draw you to them. You have to know they are happening and most Sheffield people don't.

Following the obfuscation of emails is tricky, so fbb has highlighted and coloured the relevant bits.

He hopes you can grasp the points made!

I am aware of the issues with the two timetables on the TSY website you refer to. That for the 83/83a was a result of an error on our part which was quickly spotted and corrected. The timetable for services 7 and 8 is also now correct to the best of my knowledge. Paper timetables have been produced to complement the on-line information.

I have looked at the Travel South Yorkshire website this morning and all the latest timetables appear to be on there so please let me know if your experience differs from that.

Regarding publicity, you do not say why neither the roadside publicity nor the on-line timetables say that the timetable changes are for the Summer period or give an end date.

The on-line timetable for 7/8/8a IS still incorrect: some pages are missing and others are duplicated.

The 7/8/8a timetable has been changed for the second time but is STILL WRONG! Pages in one direction are still missing.

Stagecoach advise me that there are printed timetables available. If so are they available at the PTE Travel Shop on Arundel Gate?

As at 1545 Wednesday : No new printed timetables anywhere, in spite of the promise in the email above. Out of date 57 leaflets have been removed!

For the record, the 7/8/8a  is still WRONG. The first journey is about two hours too late - a "page" is missing. 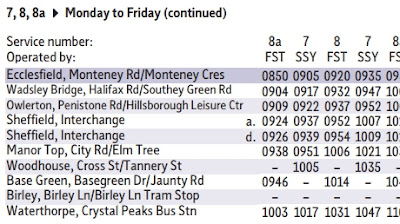 It is anybody's guess what it should be as the old timetable has been removed.

Stagecoach, who simply use the TSY tables, are showing the previous and even more incorrect version.

As our blog comment writer said above - again - "You couldn't make it up!"

FIVE DAYS after the service changed.

Interestingly it terminates at a mysterious "Brincliffe, Lay-by". No mention of the destination (and terminus) Bents Green except in the table headings and on the front of the leaflet. At least we have a printed timetable, but on the 88 on which I travelled there were only leaflets for 86 (29 April 2018) not the new 88 ones.

As before, "You couldn't make it up."

Seeing your blog and the piece on tv about the Coastliner 840 reminded me of the fan club for service 58 way back in the early 1980s. BBC regional news did a piece on it and I captured it on tape (heady days!)

The 58 was reintroduced by me between Macclesfield and Buxton about 1980 and because I was at East Midland it was operated from Chesterfield. Previously it as a North Western operation abandoned some 13 years earlier. 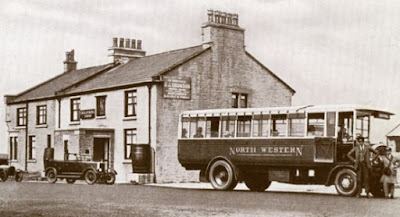 A weekend service only at that time, it grew to be operated also on a couple of weekdays in the summertime and extended to Chester; duplicates were often provided on those days.

The advent of the rural bus grant circa 1998 gave an opportunity to introduce seven day operation, and later, an increase in service to hourly. Despite funding cuts that frequency is still operating.

Indeedy it is, every hour between Macclesfield and Buxton ... 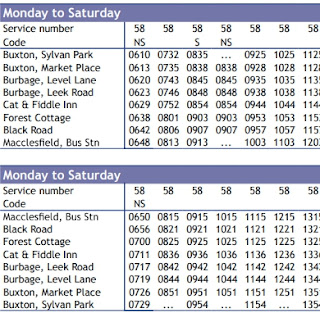 ... with journeys to Chatsworth on Summer Sundays. 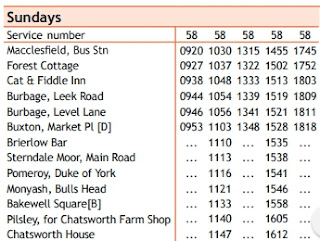 It is operated today by High Peak. 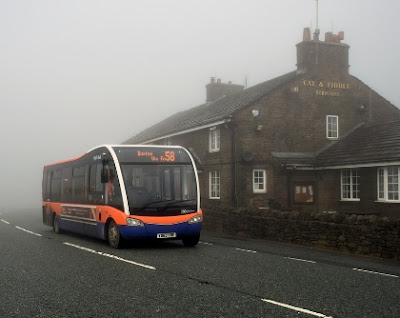 fbb is going to try to embed Peter's video, but if it fails you can link to it (here).

Note that the East Midland single decker trundling around is totally passenger-less!

Ta Ta Timmy!
First Bus has posted its annual figures and they are less than encouraging! PLC accounts are a mystery to most of us. There is a reduction in "operating profit" but that becomes a significant loss at the bottom of the figures. And a massive overall accounting loss.

So chairman Tim O'Toole has "resigned" with immediate effect. 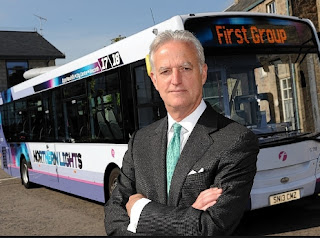 The Guardian breaks the news as follows ... 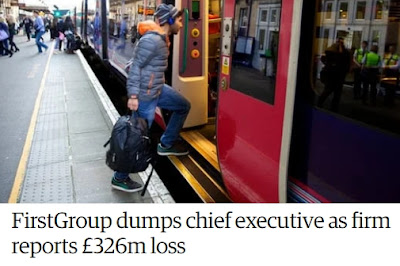 ... and hints that Mr O'Toole might be OK financially.

O’Toole, who was paid £1.26m in the previous financial year, will receive a payoff which will be revealed in FirstGroup’s annual report next month. The company would not comment on the level of the payout. However, O’Toole’s contract stipulates a 12-month notice period, so he will be negotiating a portion of the £1m he receives annually in pay and pension because of his sudden departure.

An Important Notice
The fbb laptop is poorly. The keyboard functions erratically and illogically. Letters E and T sometimes don't work at all, number 1 is unreliable and the space bar is dodgy.

So it's more than gunge under the buttons.

Our technical support works in Switzerland, so handling repair/replacement could be tricky.

Because this aggro increases blogging time by a factor of three, please understand that shorter postings will apply until he problem is solvd!!!

Thank you for your patience. 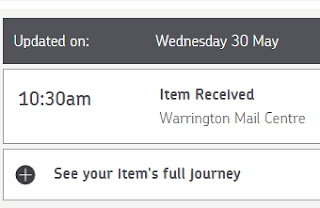 Next Scarborough blog : Saturday 2nd June
Posted by fatbusbloke at 02:00