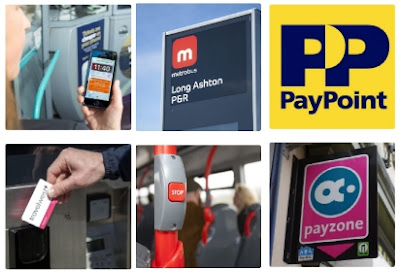 "Paying your fare is easy", we are exhorted by the web sites. Unfortunately loadings on both fbb's chosen Bristol bus trips on M3 were too small for a valid statistical survey. The T1 was a mixture of "seniors", pre-paid of various kinds but mostly the £4 day ticket ... 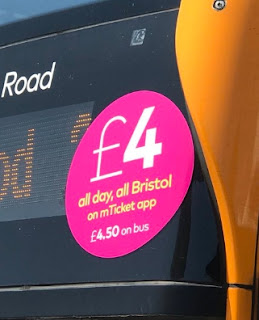 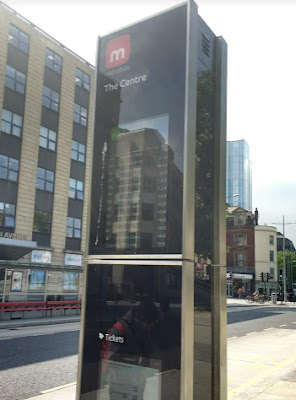 The obvious method of payment for the M3 was to use the Monoliths - but on Tuesday last only 11 of the 24 were working. 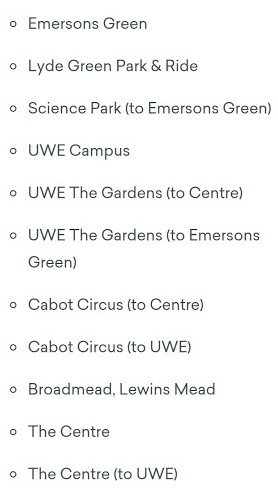 The Metrobus web site explained what to do. 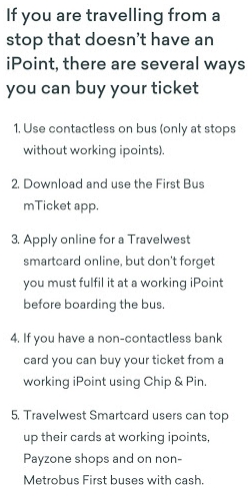 Options 3, 4 ad 5 involve finding a working Monolith; option 2 is hardly a quick fix - so you pay the driver using a contactless card, if, of course, you have activated it. If not, you walk!

fbb decided to buy an inner zone single ticket by way of a generous but unnecessary boost to First's funds. The instructions were clear and concise, but the process was slow. Choose your ticket type ... 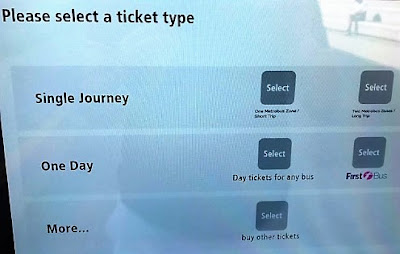 ... then a further choice or choices. 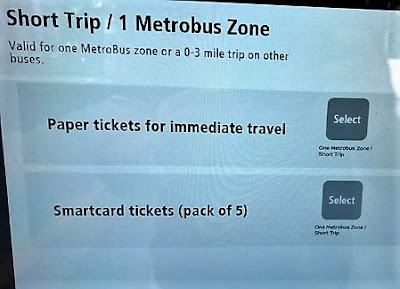 A 0 to 3 mile journey for £1.50 seems stupendously good value; but it probably doesn't mean that!

And, finally, choose how many. 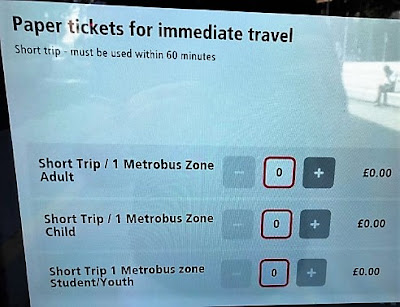 Then comes the payment process.

For fbb, chip and PIN did not work at all and contactless asked for a PIN. But he did get a paper ticket. 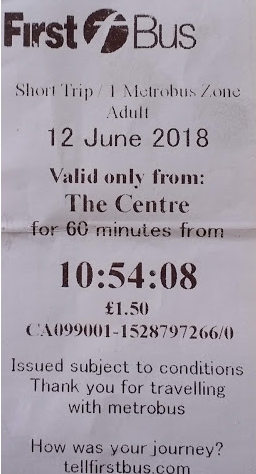 At first, fbb struggled with "Zones", taking his lead from the map on First Bristol's web site as part of his pre-travel preparation. 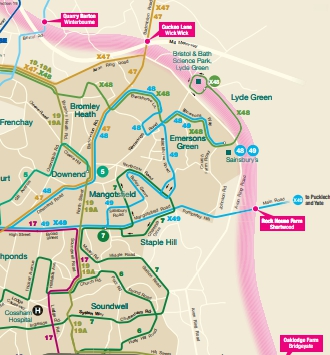 But the "Bristol Inner Zone" (within the pink border, above) is NOT the same as a Metrobus Zone, apparently. A correspondent pointed out to your unobservant author that there was a dotted line on the detailed M3 map which marks the zone boundary. 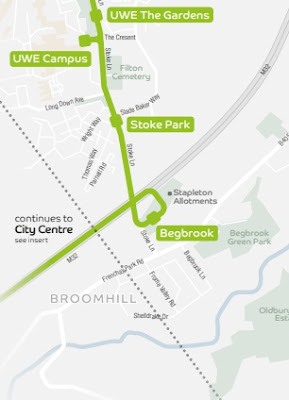 This suggests that your £1.50 buys three stops in the City centre, but TEN stops on the wilds of UWE and Lyde Green. By today's standards, the latter is as cheap as chips!

Some correspondents have remonstrated with fbb for attempting to turn back the clock to the 1950s, for being a Luddite as far as technology is concerned and for being unwilling to embrace modernity in general. Hey, that is one of the privileges of being old!

Well now; the fbb's have got the electric; both can work iPlayer and Netflix on Mr Logie Baird's new invention; both have and use smart-ish phones and both purchase goods on-line and are almost computer literate (on a good day!).

If fbb were paying from his own pocket (rather than via the Government) for bus fares in Bristol, he would be keen to buy the £4 day fare. His six trips last Tuesday (T1 part way, M3 all the way and route 8 from Temple Meads and back) would have cost him over £12 in single fares. It's a no brainer.

At least it would be if he didn't have to faff around with an "App" - he could cope with "Contactless" - just about.

When in Glasgow or Edinburgh has he always buys the day ticket - with money, even if he doesn't always get good value; because his National Old Codger's card is not valid nationally and it is less hassle than fiddling with several fistfuls of shrapnel.

It is all too complex and mysterious for the occasional visitor, and occasional visitors to Bristol should be the jam spread thickly on the First Bus financial bread and butter. The vast majority of passengers joining the 8 at Temple Meads ... 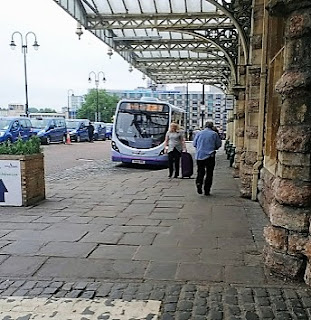 ... were either aged freebies or paying cash. Is there a PR case, even a business case, for a man in a hut selling tickets and answering queries? That would definitely speed up loading!

Which reminds el chubbo. Why is bus publicity at Temple Meads so poor?

There are directions to some stops (for City centre and Airport) ... 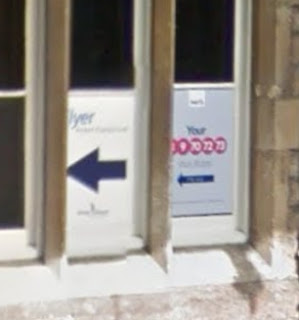 ... there is a timetable rack with nothing useful in it ... 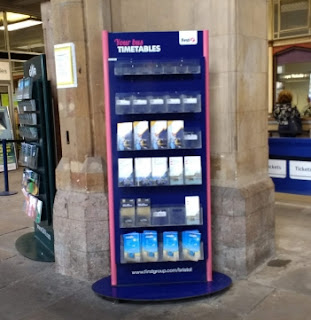 ... but no map or fares information.

Meanwhile, back on the M3, the on-bus displays ... 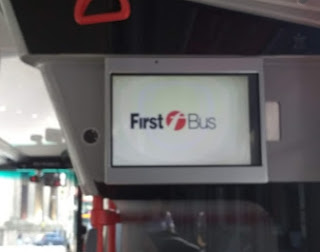 ... merely exhort you to visit Hanover! 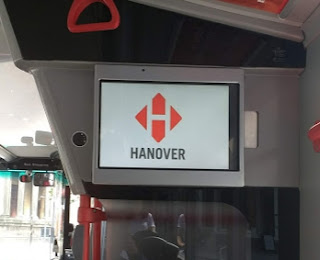 Which zone would that be in?

Of course, all these picky points will be irrelevant to the regular Brizzle Bussers who will soon learn to cope with the quirks of technology. Like the reader not accepting valid Senior passes (at least one refused on each journey fbb took) - and the lady's valid phone ticket which was declined with an aggressive belch on the M3 and nodded through by the driver after four journey-delaying electronic attempts.

Technology does not (yet) have all the answers or all the reliability. Cash usually works quite well and there are millions of bus passengers who prefer it. 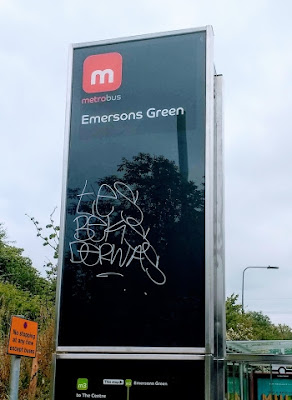 And another P.S.! "It saves the cost of handling cash" - but what are the "back-office" costs of the non-cash option, plus the more expensive ticket machines and card readers? How much is the saving?

Or is there a hidden agenda? Fares increases are less obvious, less painful, if you don't have to get the cash out of your pocket, wallet, handbag or antique sovereign case. 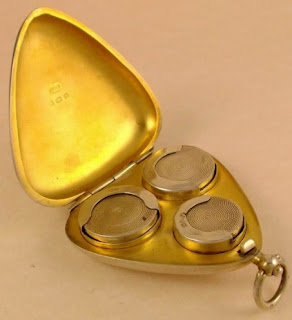 Despite these niggles, First has upped its game impressively in Bristol; a few tweaks would take it up to another even higher level.

If Bristol, then why not Sheffield? See tomorrow for exciting developments from Buses for Sheffield (?).


Next variegated blog : Sunday 17th June
Posted by fatbusbloke at 02:00