Now We Know - Only We Don't

Details of Monday to Friday train times during the Waterloo "happenings" have been around for dome weeks. fbb's local line was the lat to appear. As predicted by those that trawl journey planners for the ultimate truth, the service between Exeter, Axminster (for fbb mansions) and Waterloo is largely unaltered.

Trains will take a little longer to get TO Waterloo and, don't get caught out, leave the London terminus a few minutes earlier. Here is the "normal" timetable ... 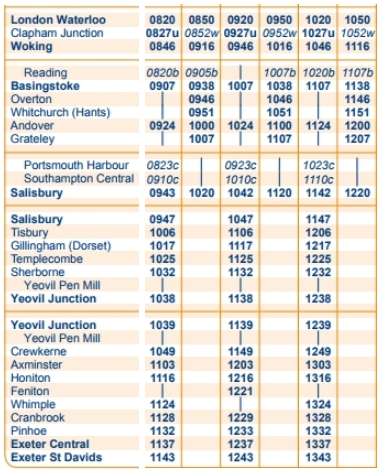 ... with xx20 departures from Waterloo to Exeter and xx50 for the Salisbury "shorts".

And during the blockade? 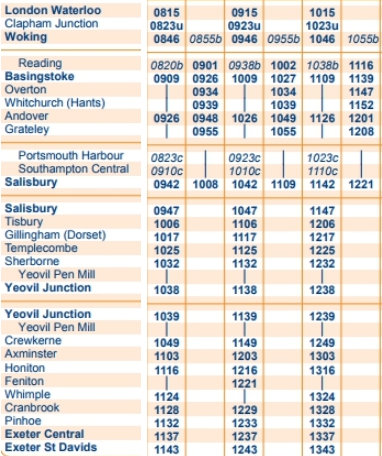 There is that easily forgettable five minutes earlier. Those who remember that it is ALWAYS twenty past might find the train well on its way to Clapham Jct leaving the frustrated forgetful passenger with a schedule that does not fct properly and an illogical compct to beat the train planners with a huge stick.

But look hat has happened to the Salisbury terminators. Inbound they get as far as Basingstoke, 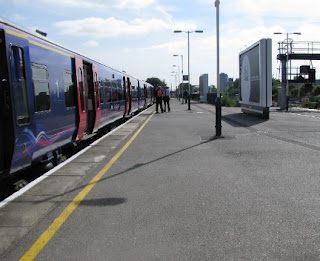 ... turn sharp left at the end of Platforms 4 and 3 and trundle off the Reading where they terminate. Knowledgeable rail experts will know whether this link is in addition to Great western Railways and Cross Country both of which companies ply the link between Basingstoke and Reading.

A gander at the GWR timetable suggests that SWT trips are extra, bringing three companies services to that little stretch of line.

But the published Waterloo upheaval timetables are only for Mondays to Fridays.

What about the weekends?

Train services at weekends during August vary from week to week and unfortunately standalone timetables will not be available. We advise you to use online journey planners.

And it isn't "unfortunate", thank you very much. The timetables exist, the trains will be running, the data is all there in the darkest recesses of SWT's cofusers. It is technically trivial to dig it out and send it to a printing machine. But SWT just cannot be bothered.

When will the rail company's realise that there are thousands of us humble mortals (who pay the bills with our fares, incidentally) who like to travel by train because you can just turn up at about ten past any hour (withing reason) and Waterloo and catch a train.

Eleven is the Ninth!
Regular readers will know of fbb's interest in the public transport of Paris. The Eiffel Tower - Yawn! Venus de Milo - armless and harmless! 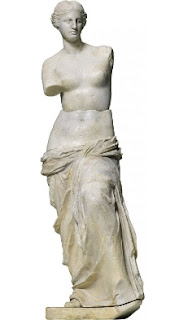 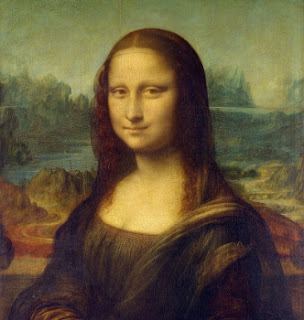 But the expansion of suburban rail, Métro and Tramway is astounding. A short while ago Tramway 11 opened. Here it is on the "Plan RER et Transilien".

It runs from Épinay-sur-Seine in the west, where it connects with part of RER line C ... 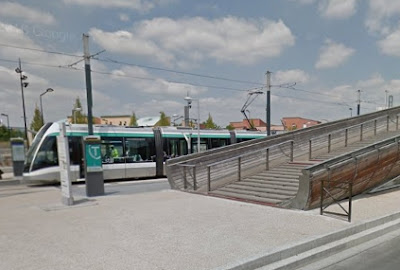 Here a spectacular ramp tales passengers over a main road, over "main line" freight tracks to a new Tram 11 stop. Hey, it's not a "stop", it's  proper station. 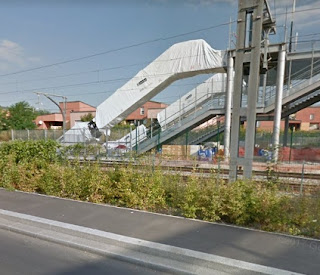 ... and still appears dotty on some maps. 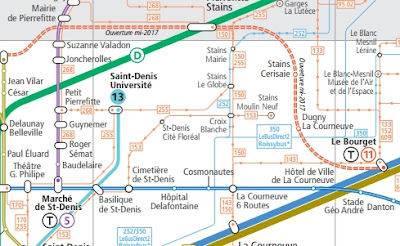 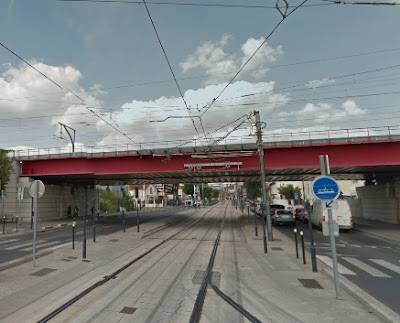 ... which is one of Paris' "monorail" lines with trams running on rubber tyres but guided by the single rail. Tram 11 is on the viaduct over the top.

After a connection with RER D, the new route curves gently round to its terminus at Le Bourget. There is the tram on its viaduct ... 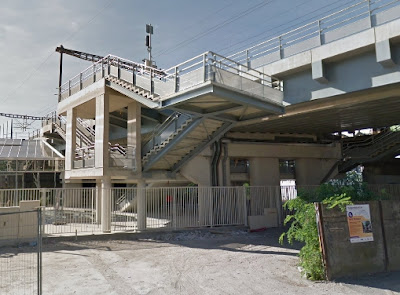 ... with steps and lifts down to the RER line B platforms.

But what is this? Here is a T11 tram and it is not RATP blue like all (most!) the others. 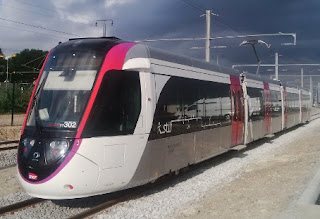 look closely and you will see why. It is not an RATP tram. 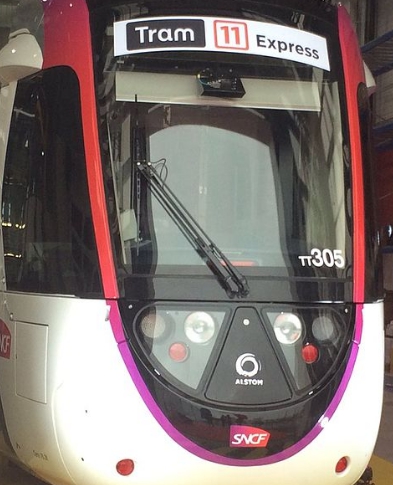 It is an S N C F tram. It is a Tram Train. (Sheffield City and Network Rail please note!)

S N C F call it Tram 11 Express whilst the Paris "combined authority" calls it simply T11. And, as it is Paris, there are already plans for extensions a both ends. (click on the map for an enlargement) 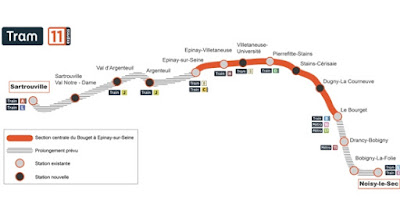 Next we need to visit Tram 9 and Tram 10. Only we can't; they have not been built yet. But in three or four years the sequence will be complete.

But there are four more Metro lines on the cards. 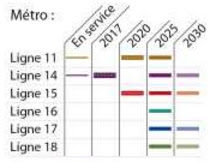 Next blog - Thursday 3rd August
Posted by fatbusbloke at 02:00