How To Make Public Transport Difficult (2)

Cat Out Of The Bag In Sheffield

The local paper (The Star) has finally got hold of the news concerning bus service changes from September 3rd. 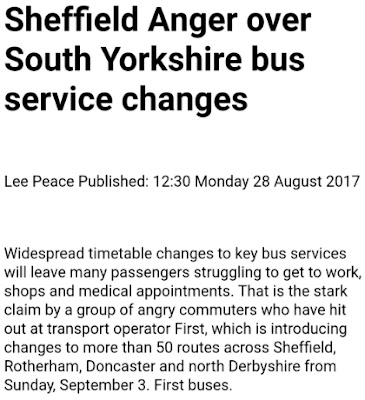 When fbb accepted the "King's shilling" and undertook to help First Bus with their printed publicity for the changes, he agreed to maintain confidentiality until local publicity took hold.

So in very broad terms, the paragraph above is correct. Whether the "inconvenience" is as far reaching as the piece by Mr Peace suggests is debatable and fbb will look at the changes (as always with a critical eye) in more detail on due course.

It is true that First will be providing cover for some Bright Bus routes; it may be true that these school runs are more profitable than poorly used "normal" services. fbb cannot compute whether First's "peak vehicle requirement" has increased, decreased or remained the same as a result of the forthcoming changes.

Of course The Star does not remind its readers that First Bus is in business to make a profit; not to be kind to Mrs Weber and her chums. The job of providing socially essential but non-commercial services is part of South Yorkshire Passenger Transport Executive's responsibility. fbb, again, will look at their replacement routes, but, in the meantime, can assure his readers that they also come under the heading of "Making Public Transport Difficult".

The article does not mention that First's "Partner" (snigger snigger), Stagecoach, has completely withdrawn one Sheffield city route, cut one route short and made the timetable much harder to understand on a third.

They are both at it!

Back To Paisley's Silly 66!

At first glance there is another service between Gilmour Street station and Glasgow Airport. Back in the days of the great Great Britain Bus Timetable, the route was always part of the Paisley local service network. Here is an extract from Arriva's timetable of a few years ago when it was service 60.

The ancestor of today's 757 to Airport and Clydebank was Arriva's hourly route 300 ...

... also via the airport. Today, McGill's service 757 merges the two functions. This runs every 15 minutes "round the houses" like the 60, but continues to Clydebank every half an hour. 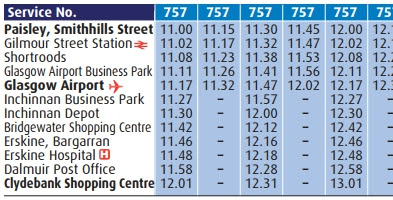 The 757 reduces to hourly on Sundays as No 3 son discovered when travelling to Largs over a week ago. But here comes the 66, unspotted by fbb when planning his lad's journey.

It runs to the Airport every 30 minutes BUT ONLY ON SUNDAYS. the departure list adds to the fudge .. 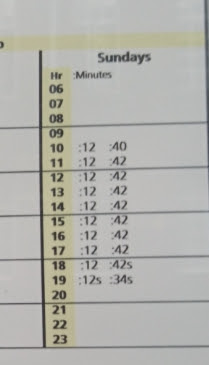 ... as the last three journeys "terminate at Barrhead Station" which is nowhere near Glasgow Airport (north of Paisley) and in completely he opposite direction (south of Paisley)

It would appear that the Sunday 66 follows exactly the same route as the 757 ... 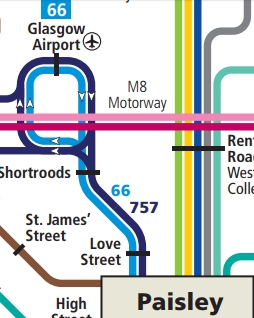 ... which leaves Smithills Street Paisley on the hour, just eleven minutes before one of the 66 schedules. The difference is that the 66 provides a 30 minute frequency to Dykebar Hospital (see timetable extract above). It is a "cross town service".

But, apart from a couple of trips, it does not serve the Airport on Mondays to Saturdays.

There is no cross reference on the 757 timetable OR the 66 timetable to explain that there are three buses an hour to the Airport on a Sunday! Had this been explained, No 3 son might have caught a 66 to the station after he landed (on a Sunday) rather than walking.

But the bafflement of the 66 is greater for Dykebar Hospital customers. 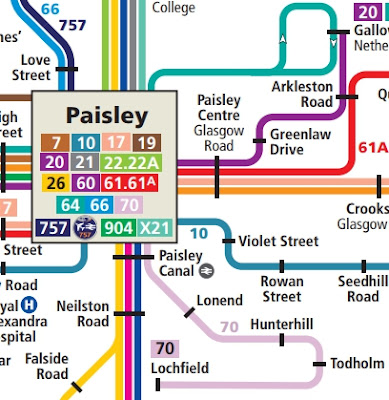 There is no cross-city 66 on the McGill's map. Worse, there is no Dykebar Hospital! It should be below of the purple line (route 70), a tad "south" of Todholm and near to Lochfield (upper left on the Google Maps extract below.) 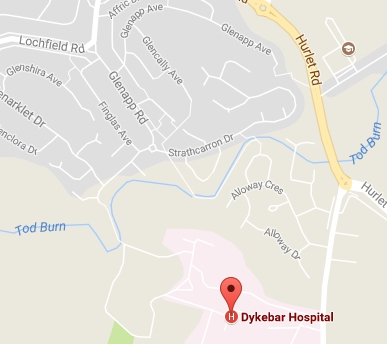 But neither the Hospital nor its route 66 appear on the McGill's map/ Clearly something has happened and the map is either incorrect or has not been updated. There is a route 70 on the map ... 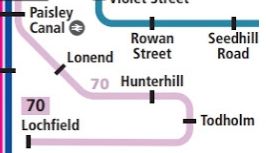 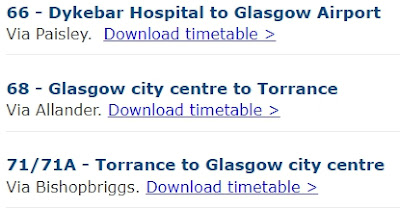 Somewhere along the tortuous line of the privatised bus industry, the destination Dykebar Hospital, served by Arriva in the recent past ... 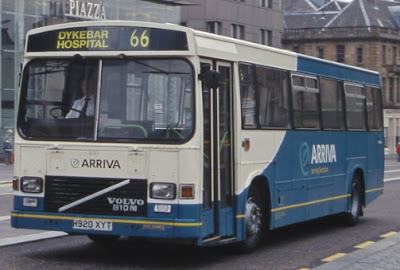 ... has been lost and then found by McGills.


fbb's detailed knowledge of Paisley's bus services is pretty-near non-existent; the days of competitive minibus madness post-deregulation ensured that what little understanding the old man once had was soon dissipated in the chaos.

Whatever the reason, much of what is "out there" at the moment is confusing to the point of misleading for the potential passenger. Regulars will no doubt cope, as ever.

One thing that a PTE could do is to give folk a co-ordinated overview, bringing together commercial and tendered services from assorted sources to help the likes of fbb and son in their befuddled state.

Clicking on McGills service 166, you get the Strathclyde PTE leaflet ...

... which shows three Sunday evening round trips on the 66 and nothing else.

And where might you find this snippet of infromation if you arrive at Gilmour Street station later on the Sabbath? Not on the 757 panel; nor on the main 66 (Sunday only) panel, but on a third and separate page with those three trips lurking at the bottom right hand corner. 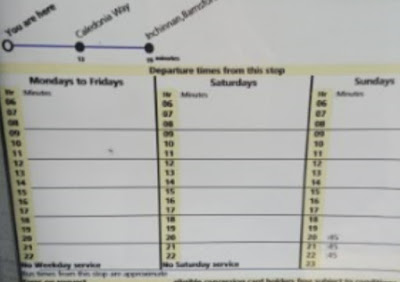 And there is one final twist of insanity. Stratclyde PTE has a map showing their three Sunday evening 66s running via the estates (Shortroods), the same way as the daytime service. 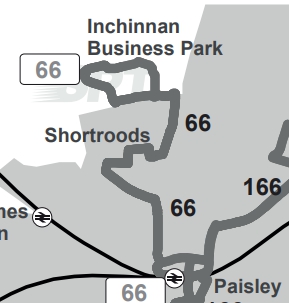 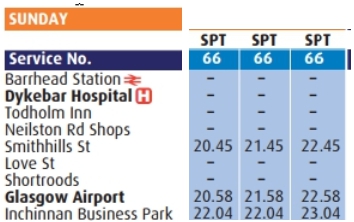 Tomorrow fbb returns to the simple insanity of Sheffield - but at least, having lived there for 20 years, he can understand it.

P.S. Thanks to Sheffield correspondent Roy for passing on the article from The Star - fbb has been expecting something similar for a couple of weeks.

Next Sheffield blog : Thursday 31st August
Posted by fatbusbloke at 02:00