All Can Now Be Revealed ...

Most readers of this blog will know that fbb lived in Sheffield from his varsity days until 1984, just over twenty years in the City of Steel. Keen readers with acute memory cells may remember that it was a visit to that fine city with No 3 son that provoked the development of GoTimetable.

After a few hours observing public transport in action, No 3 son, without provocation, announced thus:-

"Bus information is really awful. How do Sheffield people ever manage? I used to think that it was just you being, well, you. But is really, really is awful."

That was nearly three years ago and it is still really, really awful.

"We must do something about it," proffered the lad.

So he did. With fbb's help, advice and local knowledge, plus skills gleaned for several years of the late great Great Britain Bus Timetable, the GoTimetable app came into being.

Several abortive visits to Sheffield to demonstrate produced an apathetic response, largely led by the dead hand of the PTE whose pride in their poor quality "systems" is, at times unbelievable.

And, of course, the PTE no longer produces any printed material or employ knowledgeable "bus" staff to help you if you enquire in person at an "interchange" aka bus station.

So it is up to the bus operators to produce their own timetable leaflets.

It would be fair to say that, since the implementation of the disaster that is the Sheffield Bus Partnership when the phrase "service improvements" was a thin and obvious disguise for "service cuts", printed publicity has been generally inadequate, available late or not available at all. 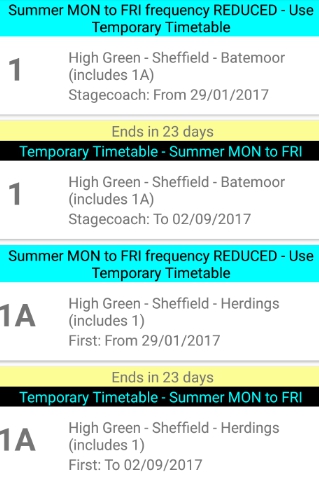 The frequency reduction on several busy cross city route implemented annually for the Summer school holiday period was barely announced this year and facts cannot easily be gleaned even from bus stop publicity. 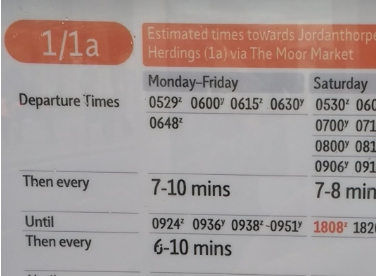 The daytime frequency in the "reduced" period is every 7/8 minutes. fbb suspcts that many (if not all) of the bus stop displays were not updated for the Summer. 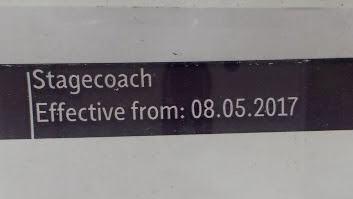 Downloadable PDF timetable pages were published but most folk would not be bothered to download them. Even if they did, the quality is not always what it should be.

Despite their being pointed out to the PTE - repeatedly - long standing errors have never been corrected. Service 88 is still shown as terminating at Banner Cross.

It doesn't and never has done. The PTE "blame" Stagecoach and when fbb tackled the big boss man (the South Yorkshire boss man, not Uncle Brian) he said, wistfully, "Oh, I though we had sorted that out."

They hadn't and still haven't. Stagecoach is currently showing the inaccurate PTE pages on its on web site. 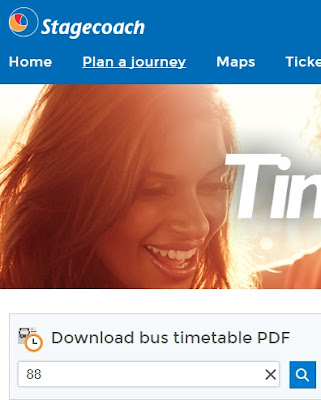 Well now; there are a load of timetable changes coming up on September 3rd.

So fbb had a bright idea. Whilst GoTimetable Sheffield is being used by a significant batch of bus passengers, the team simply have no resources for  major publicity drive.

The first Bus people were the gang who showed some interest in GoTimetable, so maybe they might go for a deal.

"As I am drawing maps for GoTimetable," wrote fbb, "how about if I give you them free for your leaflets in return for a small advert for GoTimetable on the kindly donated maps?" 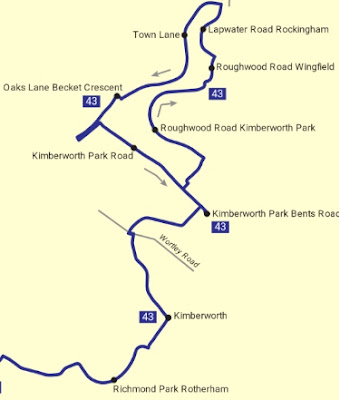 fbb was expecting a resounding silence. But, almost immediately, came a surprising reply.

"We are not interested in maps but we do need some help with our timetable leaflets. We are keen to get them out well before the timetables change."

Gasps of aghastness from fbb! (aghastness? Hey, if Shakespeare could invent words, why not a chubby blogger?)

This message did. however, come as a bit of a shock because fbb has never been backward in coming forward with a bit of "constructive criticism" of bus companies and their publicity.

So that is what has caused your elderly blogger to default to shorter blogs involving less frenetic research; pot boilers to keep things going until his "help" for First Bus comes to fruition.

As part of this project, fbb was asked (very, very nicely) not to reveal any details of what was about to happen until things were "officially" published.

And that revelation began yesterday with the first batch of changes on the Travel South Yorkshire (TSY aka PTE) web site.

September bus service changes
There will be some (actually rather a lot - fbb) bus service changes in South Yorkshire on 02, 03 and 04 September 2017. Services that are changing will be shown in the list below along with links to the PDF timetables. The list is not complete and will be added to as and when more information is available.

There is a non-surprise in the stuff just potted by TSY. Service 88 is changing ... 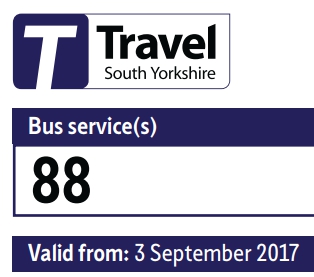 So the old man has been burning the midnight oil "helping" First Bus. What form this help has taken and whether it has been actually helpful must remain under wraps or a while longer.

But it has been a massive challenge, both in activity and timeliness.

But well worth the effort - maybe? 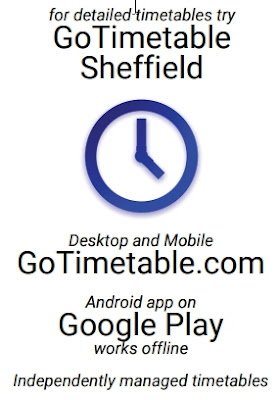 "The lads" at First Sheffield have been first class in their current dealings with the fat bus bloke and there does appear to be a change in mood at Olive Grove depot and HQ; a new enthusiasm for getting the publicity out on time and in good order.

Time will tell if it all comes together.

Meanwhile one interesting NEW service starting with all the changes is from Stagecoach. 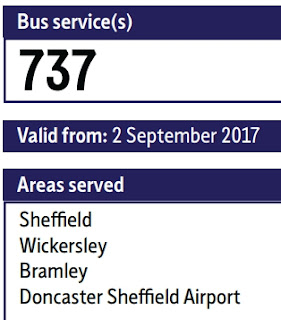 Timed to connect with the more popular flights, the service runs seven days a week. Here are the Monday to Saturday times from Sheffield.

there are fewer journeys on Sundays. It would appear that this is a commercial development and local bus watchers say that it will be run from Rawmarsh depot (Rotherham) and not from either of the Sheffield depots.

The "various" blog planned for today might well appear tomorrow.