Richmond Is NOT In Surrey

Not In Vancouver, Anyway!

fbb was struggling yesterday with how No 1 Son could commute from his hotel in Vancouver to his conference venue on bus 405 when his 405 did not go to where he wanted. Or so fbb thought.

Of course there was a simple explanation.

"It's the bit of Kwantlen Polytechnic University that is in Richmond, not the bit in Surrey."

Collapse of stout party, but when fbb sought the Uni via Google Street View, it did take him to Surrey and not Richmond. Which in Vancouver, unlike the UK, is not in Surrey.

Vancouver is not just Vancouver; like so many huge conurbations it consists of several separate administrative units; so here is Vancouver with Richmond to he south ... 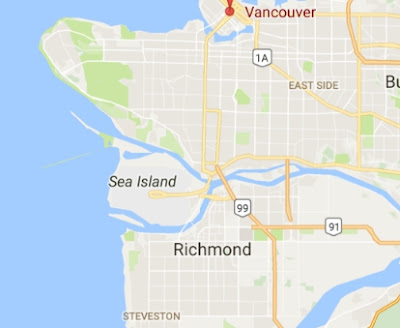 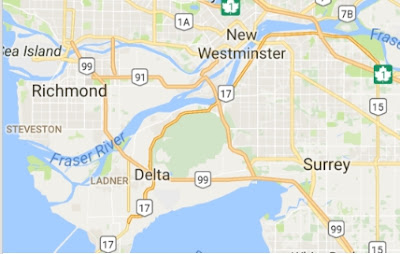 Note New Westminster and the island just below which is called Tilbury Island. And so it was that No 1 Son's "do" was in Richmond ... 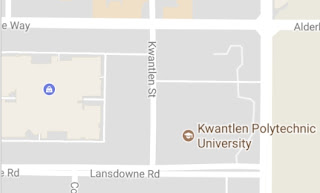 ... next to the Lansdowne Centre. Here is the Uni building ... 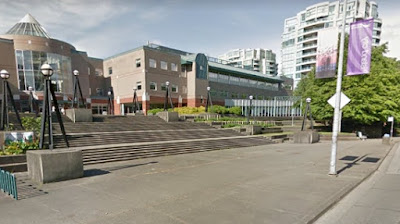 ... with its slightly posher bus stop from which the lad alighted. 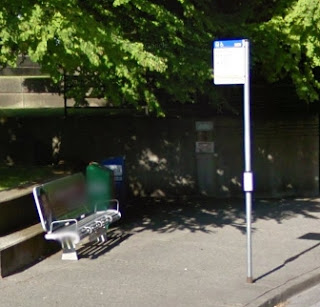 It is a improvement on the stop at the hotel ... 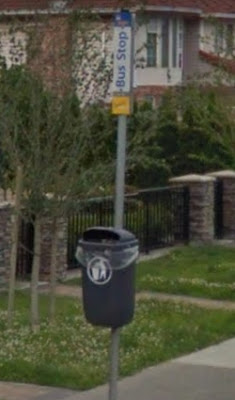 ... because it now has a bench! And here is the "basic" map of the 405 bus on its Richmond centre wiggle before it joins No 5 Road. 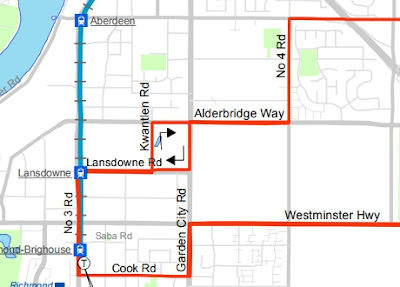 The hotel is top right where thee bus crosses the dial carriageway Route 99 ... 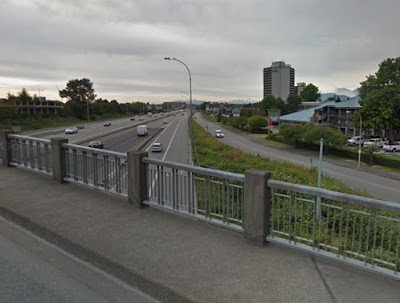 ... and the Uni is at the junction of Kwentlen Road and Lansdowne Road. And here is the bus - inside view. 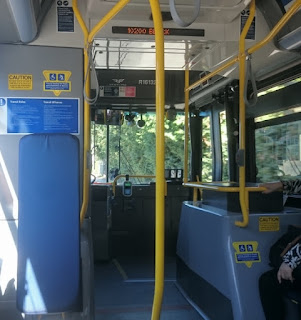 Next door to the Uni is the rather "tired" shopping mall ... 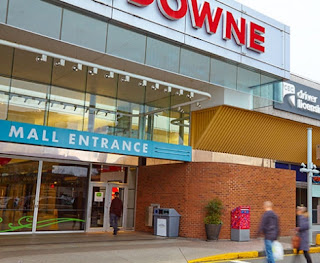 ... struggling to survive with the onslaught of bigger brighter malls elsewhere. Demolition and redevelopment is planned. fbb wonders whether his food-enjoying lad might have sampled one of the "interesting" eateries? 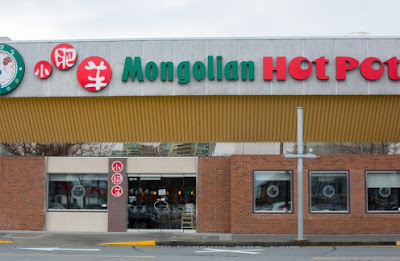 There is a bit of family irony in this picture, because fbb's father, after the death of his wife, took up cooking in a more enthusiastic way. His "signature dish", oft served to fbb and family for Sunday nosh, was called Mexican Pot Roast. Your cheeky blogger oft referred to it at Mongolian Hot Pot!

Anyway, we have discovered that it is often easy to jump to conclusions with on-line research and no amount of poking and prodding of a keyboard can replace good personal experience.

No 1 son did understandably, send a slightly derisory email correcting his father's error.

But there's more. Just beyond the delightful (?) Lansdowne Centre is this:- 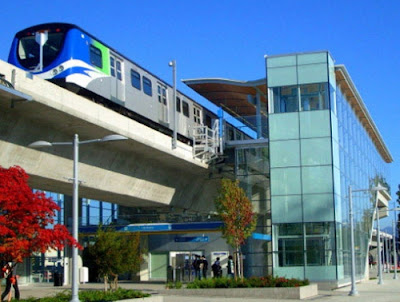 The train is on the "Canada Line" of the Vancouver metro system dubbed "Sky Train". 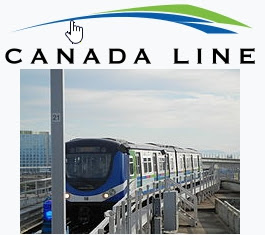 It runs from the Waterfront to Richmond with a branch to the Airport. 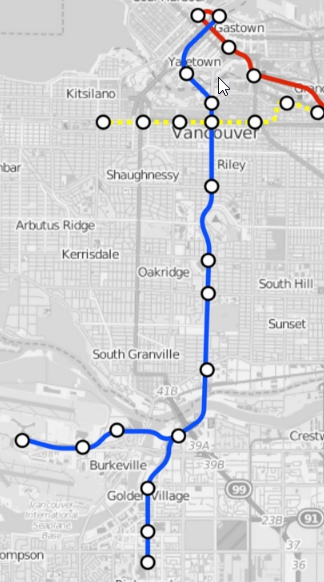 The Canada Line is the third rapid transit line built in the SkyTrain metro system. It comprises 19.2 kilometres (11.9 mi) of track; the main line goes from Vancouver to Richmond, while a 4 km (2.5 mi) spur line from Bridgeport Station connects to the airport. It had been scheduled to open on November 30, 2009, but opened fifteen weeks ahead of schedule, well in advance of the 2010 Winter Olympics the following February.

Like all the Sky Train lines, the trains are fully automatic. Those on the Canada line are to a different design from the other lines and thus cannot be transferred. No 1 Son caught it from the spectacular Airport Station ... 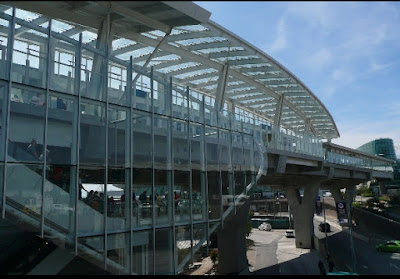 ... and was very impressed.

The Canada Line uses a fleet of trains built by Rotem, a division of Hyundai Motor Group. The trains are powered by conventional electric motors, rather than the linear induction motors used by the Expo and Millennium Line's Bombardier ART trains. Canada Line trains are operated by the same SelTrac automated train control system used in the rest of the SkyTrain network.

Tomorrow we will trace the line into downtown Vancouver (that's the city centre to you and me) and explore the Waterfront terminus and transport interchange.

Struggling with time management, fbb is still hard at work. 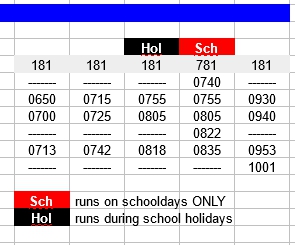 Next Vancouver blog : Monday 7th August
Posted by fatbusbloke at 02:00