Christmas Eve and New Years Eve
NO BUSES after about 1800

Printed Publicity
EXCELLENT in every way 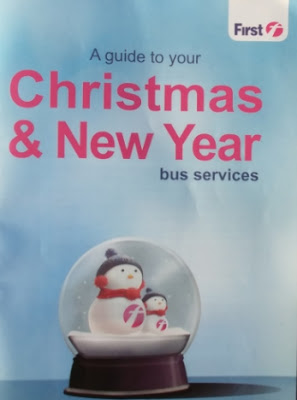 There is the bright cover (above) followed by a one page summary covering the whole "festive" farrago. 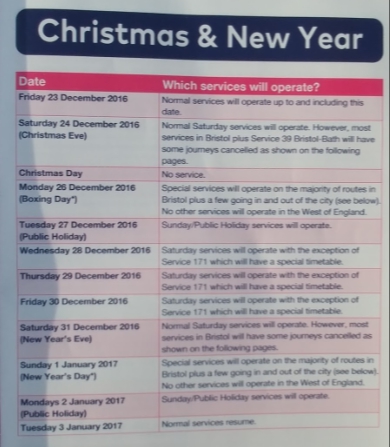 Worry not if the print is too small to read - fbb will be summarising its contents below. The booklet has been widely available on the buses from where our Bristol correspondent collected his copies.

"Here we go again" might be a first response. But read again, carefully. "some journeys cancelled" is what it says. fbb, hardened to bad news at this time of the year, was still suspicious. But there is a full list of these cancellations service by service. 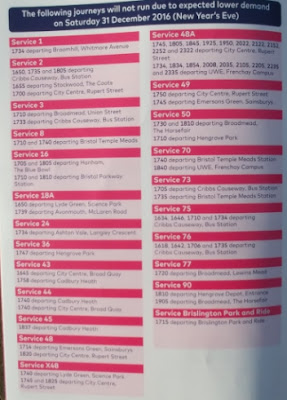 Looking at busy services a and 2, for example  we can see the pattern emerging.

There is a general "thinning out" of frequencies as the shops close, the assumption being that most folk will have completed their panic purchase for Aunt Aggie in good time. On other routes, late night journeys are cancelled. 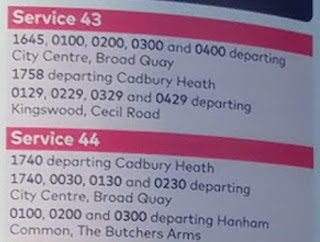 Apart from these exceptions a Saturday frequency will apply until the end of normal service.


Apparently, in Bristol, the overwhelming desire to stay in on Christmas Eve and the loving care of the company in giving its drivers the whole evening off simply don't apply. OR, might it be that repeat cur backs and a "lets not bother to take the risk" attitude have simply driven away patronage.


Bath, however, remains busless on Boxing Day and New Years Day with one exception. Monday to Friday (only) Service 171 to Peasedowen St John and CircleBath Hospital ...

... will run on Boxing and New Years Day, also on 8th, 29th and 30th December when other services are on a Saturday timetable. 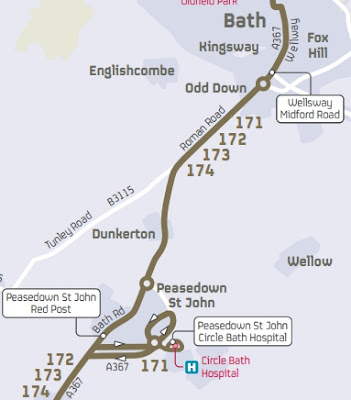 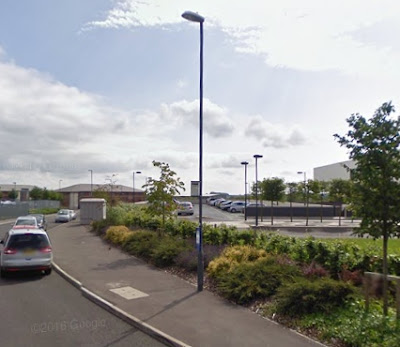 In the last few years, Boxing Day services have been introduced in Bristol (by First) and have grown in popularity. What is left of the "opposition" (viz Wessex) sticks to "tradition".

Wessex are also shutting down at about 1800 on Christmas Eve and New Years Eve.


The local press, however, has announced a Christmas Day service. It is our our friend CityFox now owners of a private hire operation based in north Wales. 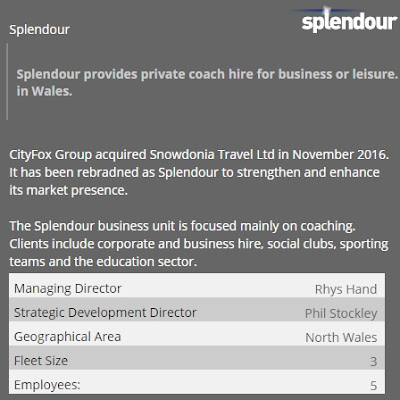 ... that will be operating service 60 under the City Fox brand. 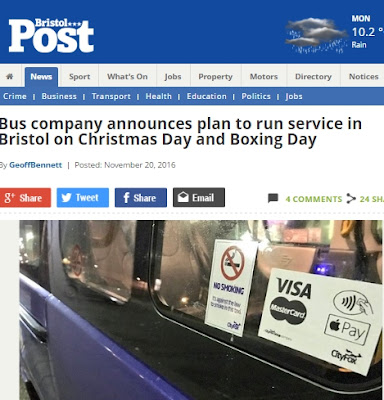 Rhys Hand told the Post: "I am delighted that CityFox can offer our 60 service between Broadmead and South Bristol Hospital on Christmas and Boxing Day this year.

"It operates via Temple Meads, Broad Walk, ASDA Whitchurch, Tanorth Road and terminating at the hospital in Whitchurch."

Mr Hand said: "My service will not only be the first to run on Christmas Day, but will be the only bus service in Bristol ever to accept card, contactless or Apple Pay payments.

"We are a transport company for its users, not for its shareholders. The only shareholder is me." 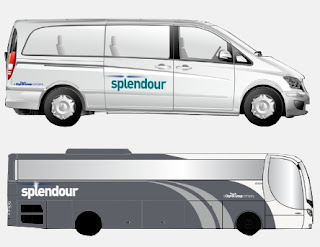 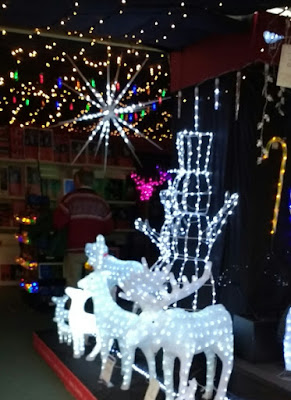 ... with its spectacular displays ... 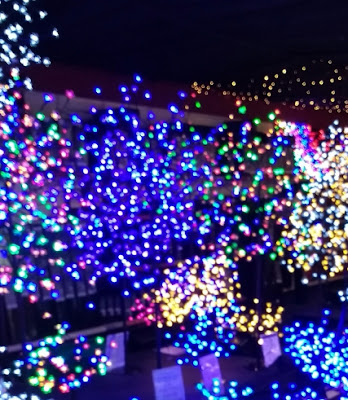 ... the fbbs were inspired to change their Christmas display for 2016.

Yesterday was the big switch-on of the lavish decorations at fbb mansions. Sadly, pictures of the majorettes, the brass bands, the massed choirs etc. have not proved usable,due to fbb's general stubby-fingeredness. But here is a sample of the displays ... 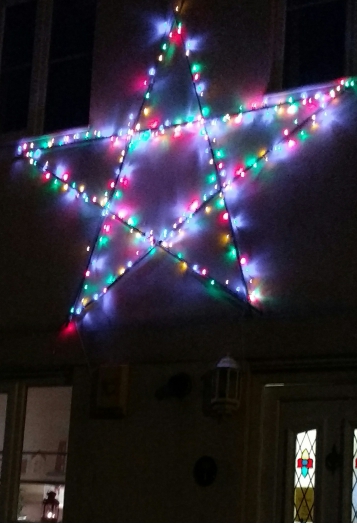 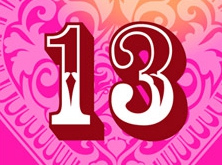 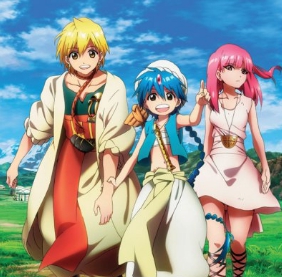 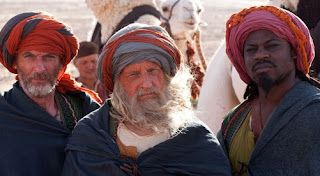 ... supposedly from the Bible. They weren't kings; there is no record of how many there were and they most definitely did not visit the cattle shed/stable/cave to see the baby Jesus. fbb is pretty certain they didn't wear silly hats like this:- 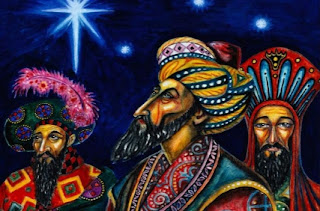 But they did study ancient scriptures.

Neither did they ride on camels.

Some men who studied the stars came from the East to Jerusalem and asked, “Where is the baby born to be the king of the Jews? We saw his star when it came up in the east, and we have come to worship him.”

In particular they researched those prophecies (doubtless some of the 24!) concerning the Messiah. Eventually they would pick up on the descent from King David, the born in Bethlehem and the "Wonderful Counsellor" bits. They told Herod:-


This is what the prophet wrote:
‘Bethlehem in the land of Judah,
you are by no means the least
of the leading cities of Judah;
for from you will come a leader
who will guide my people Israel.’

But they searched for a regal king, understandably given he duties of a "human" Messiah. It was the sort of |Messiah that was almost universally misunderstood at the time.

They should have gone to specsavers read Isaiah more carefully.