When fbb visited Bournemouth a while back, he commented that the route branded dedicated bus stops ... 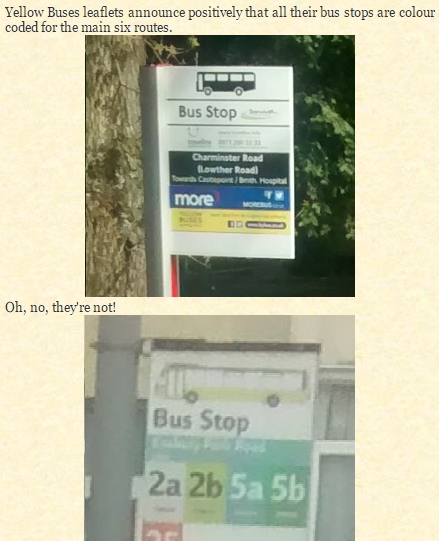 ... were disappearing, being replaced with generic Yellow Buses labels. The coloured labels were faded and often indistinct; the whole idea looked as if it had run its course.

Then this appeared on the Yellow Buses web site. 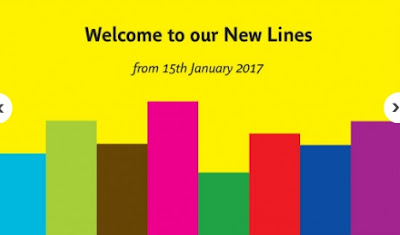 It even had a Christmas version. 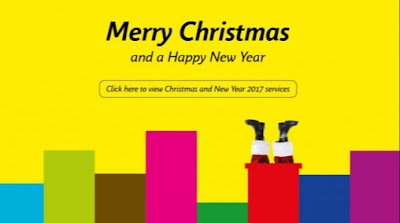 And this appeared in the local press ... 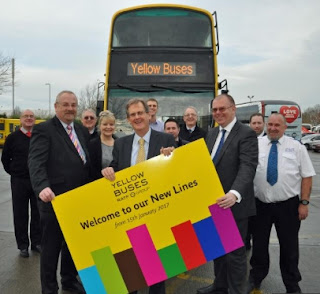 ... with an article announcing a brand new colour coded network for the town. About a week later a route diagram appeared which implied, as hinted above, a major re-jig of the main line routes "to improve the services for the passenger".

Ever cynical, fbb wondered whether this might be a "cunning plan" to reduce services and save money.

The only way to decide was to look at the new network versus the old, to compare and contrast.

So, without a safety net, and resolute in the face of danger, here goes.

The current service 1a, 1b and 1c form a main line corridor between Poole, Bournemouth, Branksome and Christchurch. The through service is 1b and 1c running every 7 and 8 minutes. 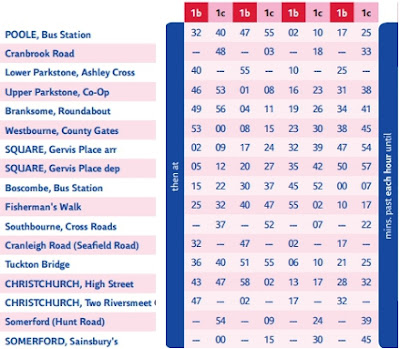 The routes are different in Poole ... 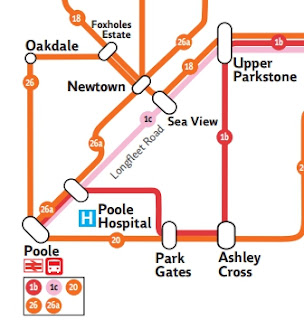 An additional service 1a runs from Bournemouth in the Christchurch direction. This is every 10 minutes.

The three 1s follow different routes between Bournemouth and Christchurch. 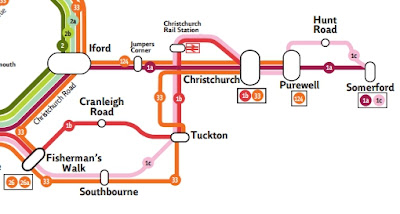 1b and 1c do the wiggles via Fishermans Walk ans Tuckton, whilst the 1a (EVEN DARKER RED) runs via Iford and the main road.

So what is happening.

The 1b and 1c become ROYAL route 1 and 2 and, from 15th January, will run via Iford to the Royal Bournemouth Hospital. 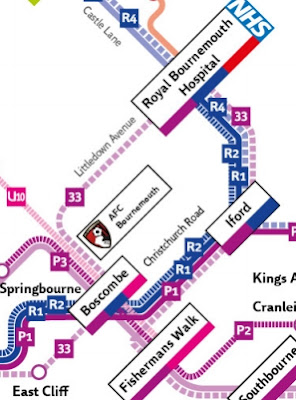 On this section they replace the current 15 minute frequency provided by service 2, 2a and 2b. 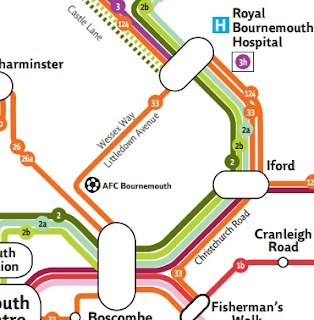 These are currently coloured DARK GREEN (2), LIGHT GREEN (2b) and WISHY WASHY BLUE (2a) which might have been a failed attempt to print a wishy washy green!

The R1 rune every 17 or 18 minutes Monday to Friday

Feel free to click on the graphic above of you don't believe fbb - he didn't believe fbb either. And in case incredulity still applies, the R2 is similar. The easiest was to grasp this is to say the the joint R1 and R2 frequency is roughly every 9 minutes or (even more roughly 6½ buses every hour.

Bearable, perhaps, on the long common section, but totally impossible on the "split" section at Poole.

Next question. What has happened to the Christchurch block of services? 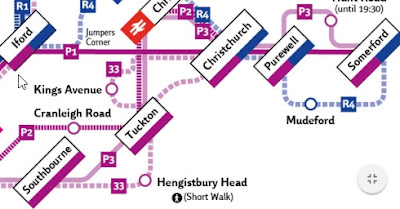 The old (direct) 1A becomes the purple PRIORY 1 and remains every 10 minutes. The 1b (currently every 15 minutes) becomes P2 every 20 mins and the 1c likewise becomes P3 and also drops from every 15 to every 20.

In fact, every one of these services so far drops in frequency EXCEPT the former 2s to the Hospital which INCREASE from four buses and hour to 6½ and the 1a which remains the same

At the moment the 2a and 2b continue by different routes giving a combined half hour service between Hospital, Castle Point and Kinson. 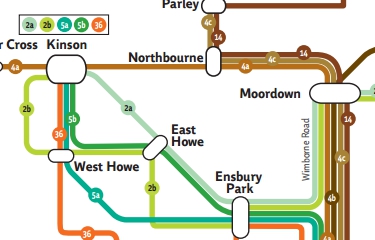 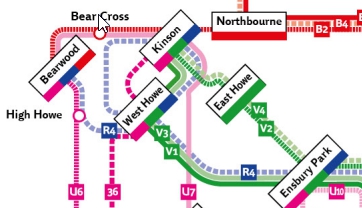 Many folk in these areas will be deprived if a direct bus to the hospital.

Which leaves the current service 3. 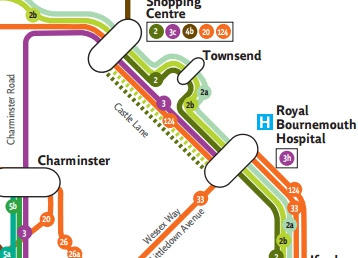 The present route (PURPLE) runs via Charminster Road every 7/8 minutes to Castle Point Shopping Centre, continuing every 15 to the hospital.

fbb would like to tell his loyal readership what the frequency of the apparently identical R3 might be ... 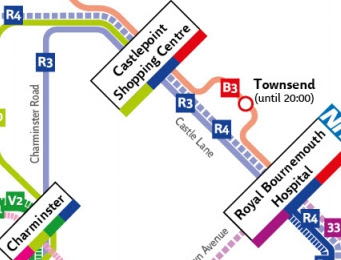 ... but he is thwarted in his journalistic desires. Yellow Buses had no timetable on its site but Traveline does.

Except for the R3!

It may yet appear. Or it may not. fbb guesses every 10 minutes all the way to the hospital - another reduction. 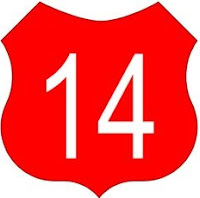 One other person was VERY interested in those prophecies of the coming Messiah; and that was Gospel Writer Matthew. We know very little about him - many assume he was the tax collector (a k a Levi) called to follow Jesus but the two are never matched in the text. Matthew was a common name. 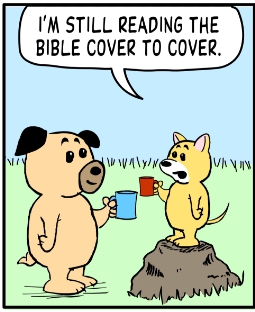 But Matthew was obviously a Jew, writing for Jews; so his particular "mission statement" is to show how Jesus fulfilled all those Old Testament mini predictions. 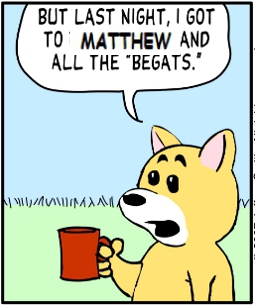 The book of the generation of Jesus Christ,
the son of David,
the son of Abraham.
Abraham begat Isaac
and Isaac begat Jacob
and Jacob begat Judah and his brethren
And Judah begat Phares and Zara of Thamar
and Phares begat Esrom; and Esrom begat Aram;
And Aram begat Aminadab
and Aminadab begat Naasson
and Naasson begat Salmon
and Salmon begat Boaz of Rachab
and Boaz begat Obed of Ruth
and Obed begat Jesse;
and Jesse begat David the king
and David the king begat Solomon
of her that had been the wife of Uriah; 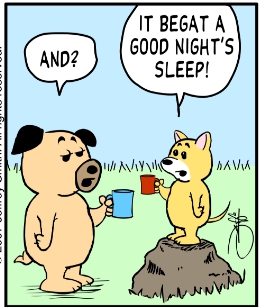 But it shows, beyond any shadow of doubt, that Christmas was part of some sort of Divine plan.