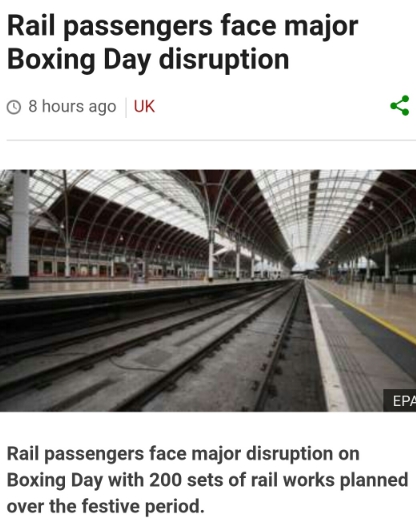 As most railway services were totally inoperative on Boxing Day, the headline was, arguably, correct but for the wrong reasons. In a near complete shut down of the network, the disruption caused by engineering works was nil.

The article did admit to the shutdown in a late paragraph. 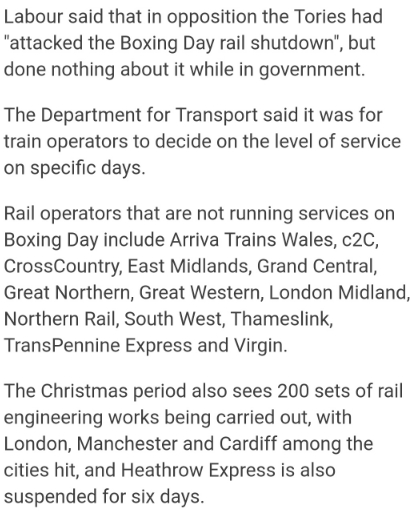 But by early afternoon, someone at the BBC twigged that their first headline was a nonsense; the page was then changed. 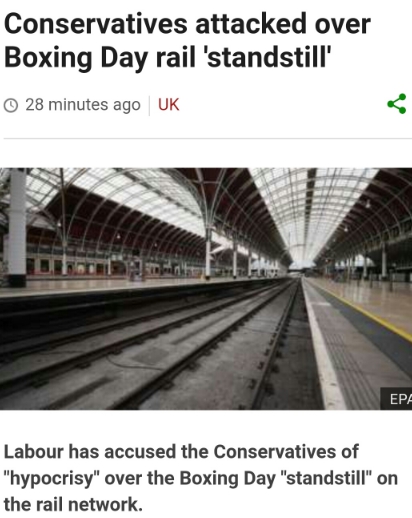 Surely it is time for the Department for Transport (DaFT) to insist that all franchisees operate at least a Sunday service on Boxing Day?

Another Seasonal Mystery
Whilst researching the Traveline App for yesterday's blog, fbb was doubly mystified by this offering from First Bus. Generally speaking the various systems all declined to suggest journeys or times for Christmas Day ... 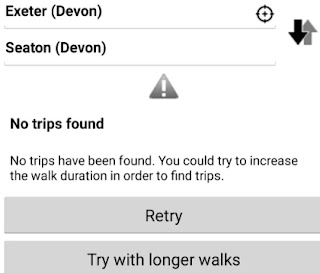 ... although exhortations to retry were somewhat pointless.

But a search for the Holmfirth journey on 25th December came up with this. 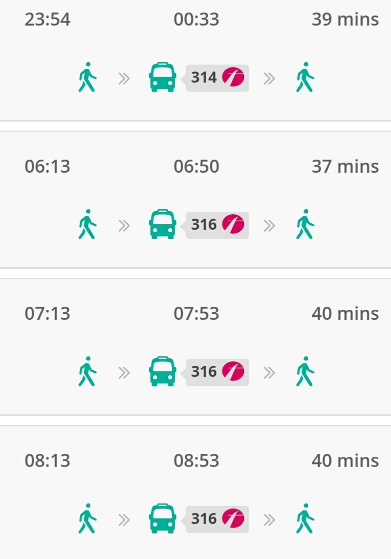 There were no buses to Holmfirth on Christmas Day, Even assuming that the system had rolled over to Boxing Day (without telling the user!) everything was still wrong.

There was no 2354 departure on the evening of Christmas Day. And there were two journeys an hour on Boxing Day as we saw in yesterday's blog.

Sterling Service at Stirling
Take a short ride along the delightfully named Drip Road, you will come to the junction with the M9. 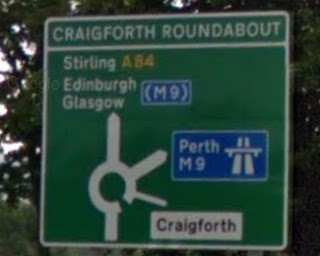 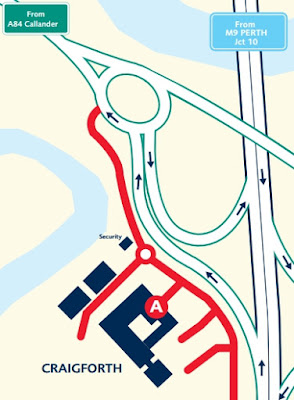 ... leads to a massive concrete bunker whereat Prudential do their mysterious thing. 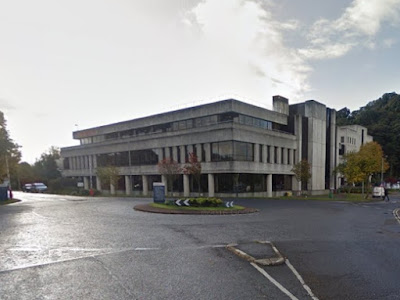 A Scotland correspondent happened to be passing at just after 1700.

At the back of the car park (to the right on the building above) he observed the "Ceremony of the Departure".

In the morning about 18 coaches arrive from all corners of Central Scotland, disgorge their happy men and women from the Pru ... 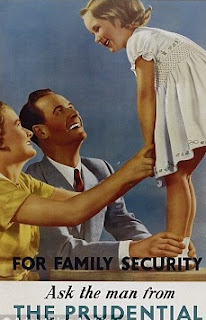 ... who settle down to toil away in the blockhouse. Most of the vehicles then depart to do what contract coaches do during the day. They then return for the 1710 LeMans start. 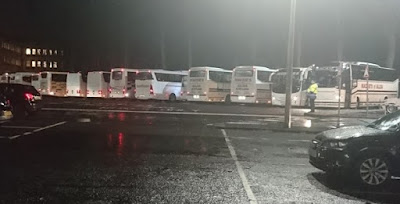 This evening parade takes priority over the common herd who have used their own cars so there is a made rush for the car park area to escape before hi-viz vested obergruppen führers direct the departing coaches past the waiting cars. 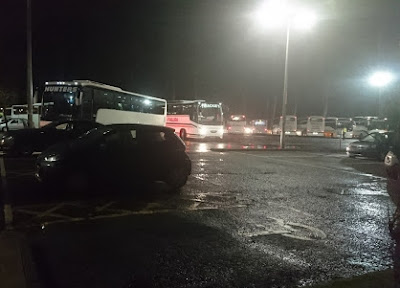 As the poet Thomas Gray wrote:-


The time clock tolls the knell of parting day,
The lowing cars wind slowly out the gate,
The coaches homeward plod their weary way,
And leave the Pru on time - so don't be late.

fbb's correspondent observed this ceremony on a number of occasions and was impressed with its efficiency, Sadly, as these are "contract carriages", they do not feature in the bus registrations system and no timetables are published outside the dark and secretive portals of the Pru blockhouse.

A Very Useful Offer
Most folk who use the interwebnet are used to being plagued by adverts. fbb gets a few and was very impressed with this invitation. 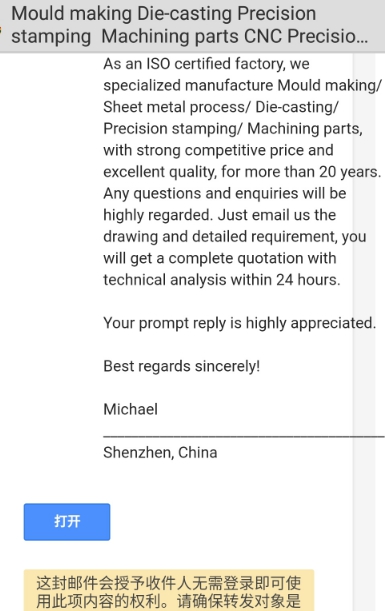 Sadly the invite arrived just  few hours too late to organise some die-casting as a Christmas gift for Mrs fbb.

And Finally
Boxing Day was very unusual at Abergynolwyn. It wasn't raining! Not only that, but the sun was shining. fbb and Mrs took a short drive around the back roads and took a few piccies.

This is the view from their residence looking towards Cadair Idris ... 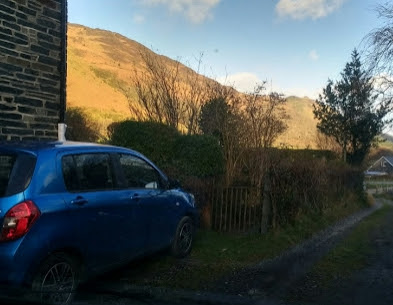 ... and this is nearby Birds Rock. 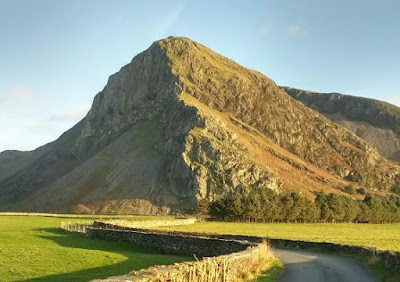 Back in pre-history, this was a cliff surrounded on two sides by the sea. Sea birds nested there - and they still do, despite its being 6 miles in land.

Craig yr Aderyn is an isolated hill in the county of Gwynedd, that juts out into the Dysynni Valley. It rises to a height of 258 metres (846 ft) above sea level on the south bank of the River Dysynni, near Llanfihangel-y-Pennant. 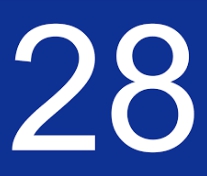 Not only did Simeon greet the Christ Child in the temple but Mary was accosted by another oldie. 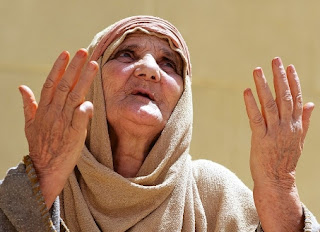 There was a very old prophet, a widow named Anna, daughter of Phanuel of the tribe of Asher. She had been married for only seven years and was now eighty-four years old. She never left the Temple; day and night she worshipped God, fasting and praying. That very same hour she arrived and gave thanks to God and spoke about the child to all who were waiting for God to set Jerusalem free.

Sounds all very great and positive; but back to Simeon from yesterday's blog.

Simeon said to Mary, his mother, “This child is chosen by God for the destruction and the salvation of many in Israel. He will be a sign from God which many people will speak against and so reveal their secret thoughts. And sorrow, like a sharp sword, will break your own heart.”

It looks as if the story of Jesus may well end in tragedy. 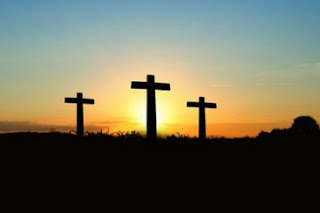