A comment writer suggested that there was no "nastiness" in GoAhead's extension of the 500 to Woodstock ...

... whereas our man in Northampton prophesied a possible punch up with a pugilistic response from Stagecoach. So guess what the Oxford Mail reports! 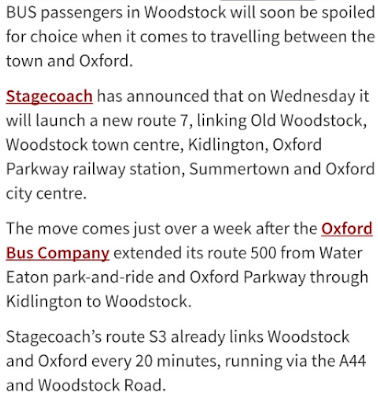 And this is from Stagecoach - explaining why. 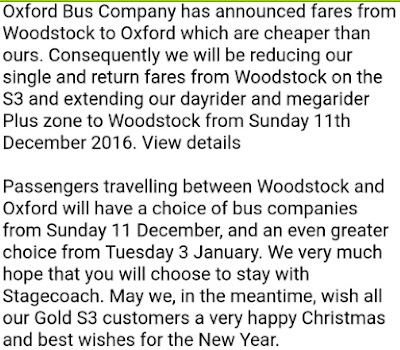 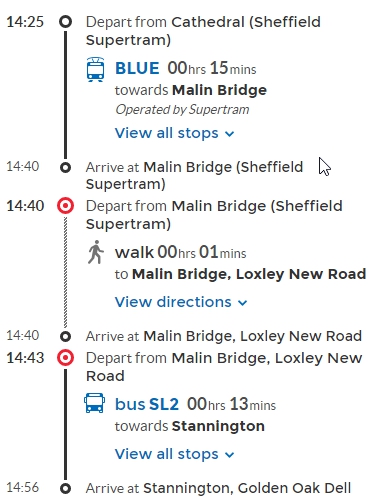 But please make sure you leave enough time fro the 1 minutes walk from tram to bus stop!

But the on-line experience is marred by daft locations - AGAIN!

Stagecoach thinks that Acorn Drive is in Bradfield. 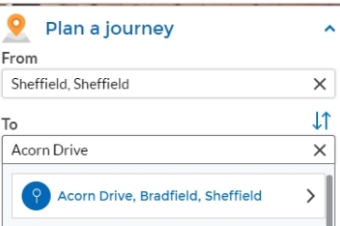 Only 4½ miles out. In case you wondered, there is NO Acorn Drive in Bradfield.

But there is one in Stannington ... 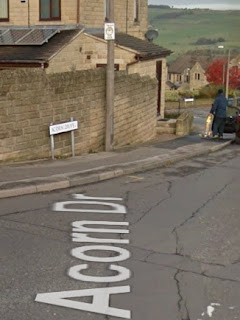 ... and here it is on Google Maps (upper left), very close to the appurtenances of the village centre. 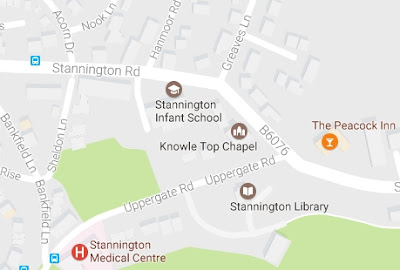 Sadly First Bus' journey planner is equally potty. Mr Fearnley's lads don't know that their route 81 goes to Acorn Drive so they make you walk. Acorn Drive is long and winding, so the 3 minute walk is wildly optimistic. 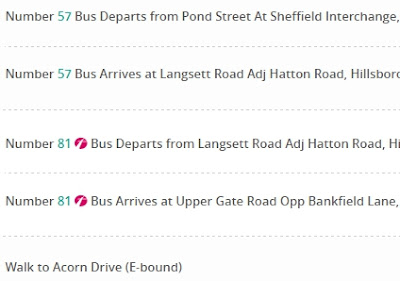 Apparently they also don't know that their own service 81 runs from the city centre.

But First does recommend Supertram and Link 2 ...

... and some hours after fbb's original enquiry, First appears to have found through buses from Sheffield. But don't be deceived - they may be through from Sheffield, but they don't ever get to Acorn Drive. 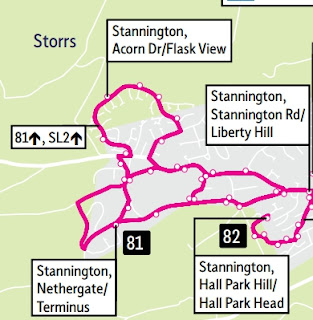 Those that heap praise on Traveline might amuse themselves by trying to explain all these anomalies.


The blog about Supertram Link 3 is postponed

Up-to-Date with Notwork Rail?
There was considerable concern when Notwork Rail (possibly then called Snailtrack?) announced an extra platform at Kings Cross. Despite the existence of Platform 9¾ (?) ... 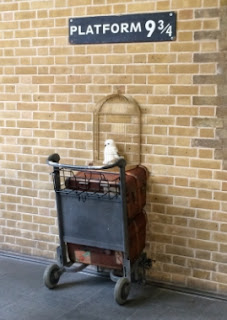 ... the feeling was that it would completed noddleificate regular passengers if they renumbered everything to make the new one fit. So it was Platform 0. 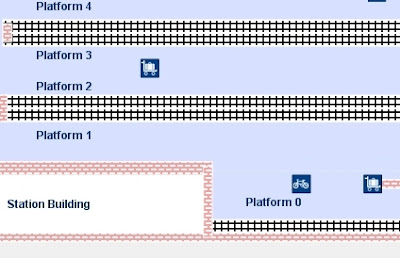 And here is Notwork Rail's picture of Platform 0. 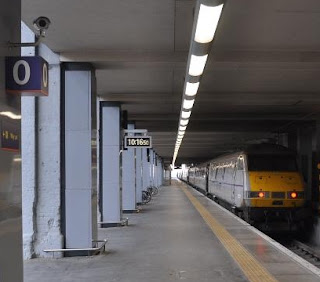 There is now another one which opened with the timetable change earlier this month. 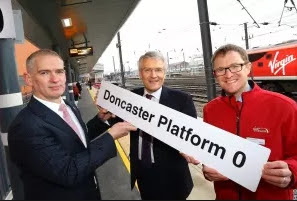 Where is it? Like Kings Cross it is one beyond Platform 1, hence the same problem. It would have required everything to be renumbered - a fearful task which would spread confusion. But there it is, just tacked on to the Frenchgate Shopping Centre. 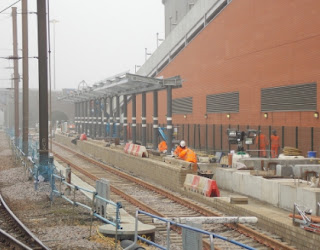 But go to the Notwork Rail station site and there it ... 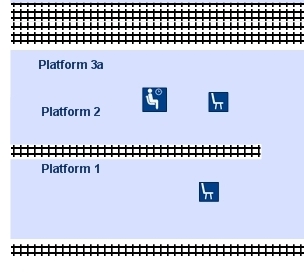 The labelling of the diagram above is unhelpful "Platform 1" belongs to the lowest track, "Platform 2" should adjoin the bay and, wowee, "Platform 3a" is correct. Here is a picture thereof. 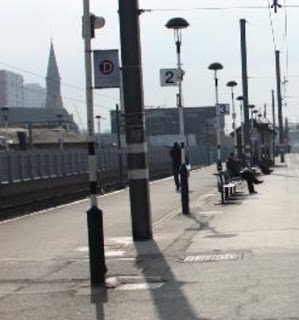 But there is no Platform 0 on the diagram, and no picture.

Maybe the lads at Notwork Rail have forgotten that they have built a new platform? But the National Rail journey planner confirms that trains are using it. 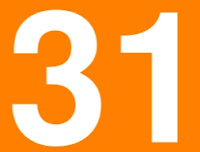 Useless gifts? A comment writer (this blog, yesterday) though this was a misprunt. It wasn't. Two year old lads would have little interest in frankincense and myrrh - too smelly; and gold would be a long term investment of use to the parents, maybe. Toddlers might like a box of bricks, a football, sweets or  new mobile phone, but not gold.

But the wise men were recognising something amazing about the lad. It was not who he was that led these bookish blokes to make the long, long journey "following yonder star". 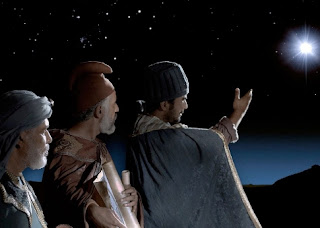 But who he would become! 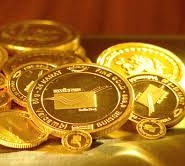 Gold symbolised King-ship; the magi initially searched for a King via Herod. But the vision is of an eternal King "reigning in heaven". That's an idea which take us "out of this world" - literally. There are no words in any language which could even begin to describe God, so we have to use crude and unsatisfactory "pictures". Here, Gold is a picture of eternity, majesty and total authority.

An aromatic resin used in two ways. It was, literally, an air freshener when people were much more pongy that they are now. But it went further; it was a symbol of holiness and thus the Priest. In more formal branches of the Christian religion, the priest is the "go-between" through whom ordinary people can reach out to God and through whom God can bless and respond the people.

Jesus, the Way to God! 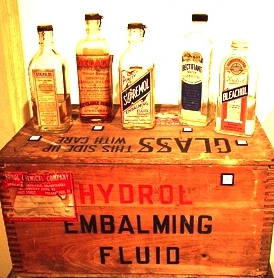 Another pongy stuff. But this time used for embalming dead bodies. No wonder Mary "pondered all these things in her heart"!

Jesus, born to Die as a Sacrifice for us!

Those wise men had done a great job putting it all together. But the world in general would have to wait for about 30 year before the whole story played out.

Born a King on Bethlehem’s plain
Gold I bring to crown Him again,
King forever, ceasing never,
Over us all to reign.

Frankincense to offer have I;
Incense owns a Deity nigh;
Prayer and praising, voices raising,
Worshipping God on high.

Myrrh is mine, its bitter perfume
Breathes a life of gathering gloom;
Sorrowing, sighing, bleeding, dying,
Sealed in the stone cold tomb.

Glorious now behold Him arise;
King and God and sacrifice;
Alleluia!, Alleluia!,
Rings through the earth and skies.