Not For Those With a Nervous Disposition

It all began on a dark and stormy night in the former slate mining village of Abergynolwyn. The wind was howling up the valley from Tywyn; the rain was lashing the windows of the small cottage in which and elderly and portly gentleman of leisure was slumped over a table,

A softly guttering candle was the only light offering a feeble glow in the looming darkness.. 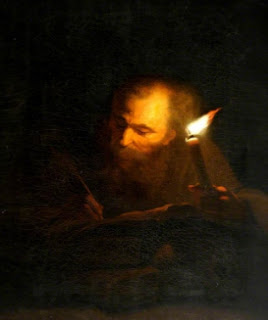 In the faint distance a strange and eerie bell rang just once. The bell was like no bell mankind had heard ring before. It had a doleful deathly tone as of one tolling for men lost at sea. But, the old man pondered, there is no bell in the village, no tower from which even a modest act of campanology might issue forth.

The ghostly sound both irritated and annoyed the old man as he considered his mortality, his purpose in life and the dubious benefit of one last drink. There was an iciness in the atmosphere and  cold clammy feeling around the back of his neck.

How should he respond to the redounding doom of the calling klaxon? 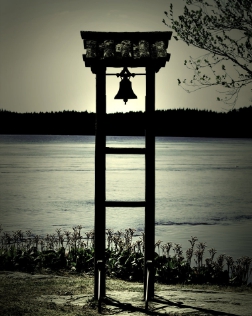 So fbb finished his cup of tea, switched on the lights, turned up the central heating and opened the message, just received, on his phone!

It was from correspondent Roy from Sheffield. He wrote:-

I was returning from Lancashire to Sheffield and decided to try the journey by bus. The research went well until the schedule reached Huddersfield. The next stage, I surmised, might be from Huddersfield to Holmfirth and forward, somehow, to Barnsley.

The journey was on a weekday some time before the Christmas timetable variations. Roy decided to consult the Traveline App. First leg researched was from Huddersfield to Holmfirth. 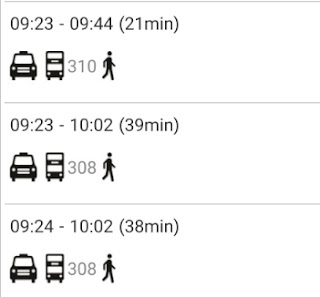 But something didn't look right. A taxi linking to service 310? Two taxi links to the same 308 bus? And the 308 is the least direct route offering the longest journey (DARK RED, left of the map). 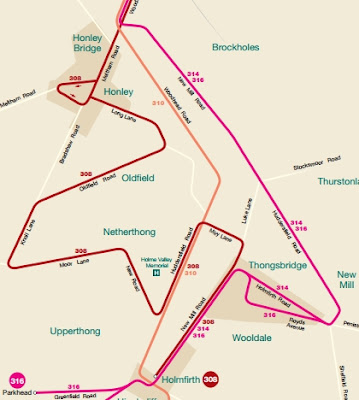 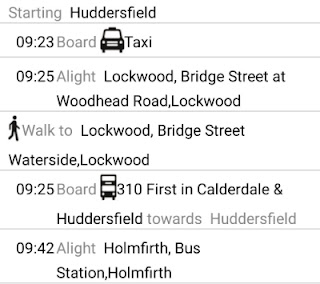 There is no 0942 arrival in Holmfirth! But there are plenty of through buses from Huddersfield.

They have recently been branded ...

... A to Beyond "Holme Valley Connection" and given a shiny new livery. 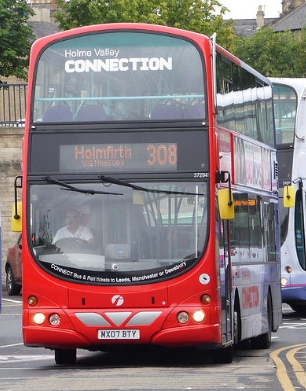 Quite what the app was advising is undoubtedky a ghostly mystery.

But it gets worse. Here is another taxi based journey. 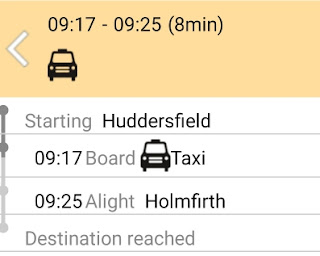 The taxi takes 8 minutes. and thus will be travelling at nearly 50 miles an hour, on average ... 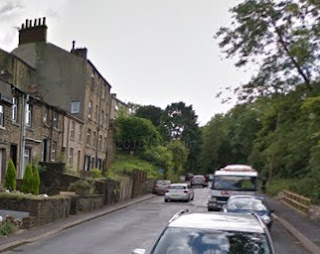 ... with long sections of built-up road with a 30mph limit. Some taxi ride!

The whole ghastly mess is, yet again, typical of the poor standards of Traveline. The App is often wrong AND Traveline expect us to endure annoying adverts to pay for it. Or we can buy an advert free version.

It is scandalous to ask bus passengers to pay to discover what the bus companies have on offer; it is doubly scandalous when the information is so appallingly wrong.

But fbb can help. Instead of the "national" App, users should download the Traveline South West App. This also contains the full national data set but is not plagued by adverts and is FREE.

But it also gives stupid answers for the journey between Huddersfield and Holmfirth; and still did on Boxing Day 26th December.

It was doubly-daft because it was showing the normal weekday timetable! 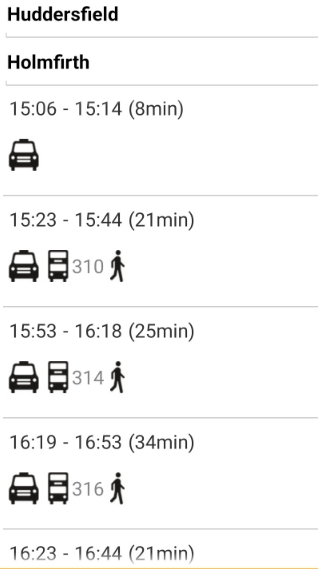 The correct Boxing Day times are published by Metro ... 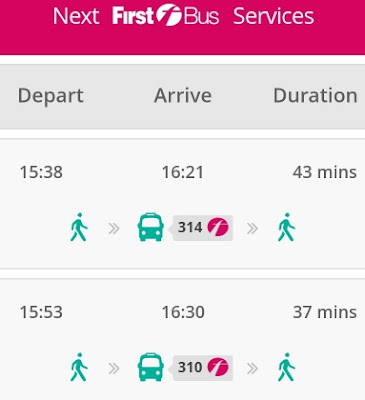 ... and more helpfully shown without clutter on the national Traveline site. 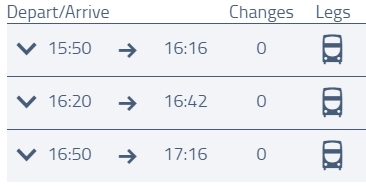 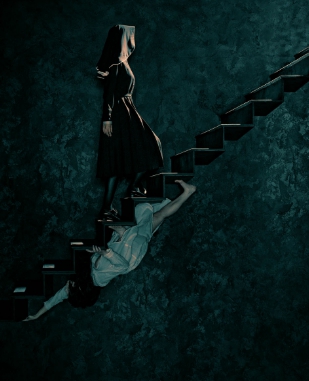 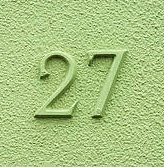 The old man, Simeon, had been told in a vision that he would not die until he saw "The Salvation of Israel". Maybe Simeon was expection a military or political "Salvation" from Roman occupation - we do not know. But his "song" has formed part of Church Services for centuries. Its title "Nunc Dimittis" is Latin for "Now Dismiss".

But the key phrase in the above modern English version is "a light to reveal your will". Christmas is about bringing light to a dark world. 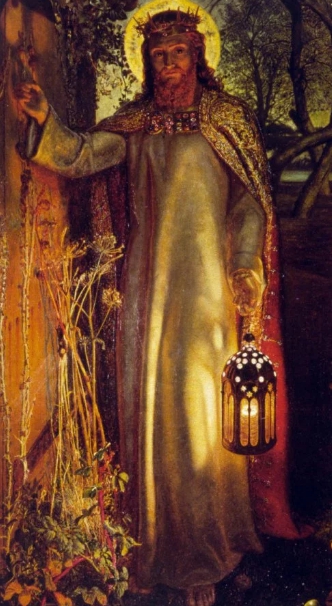 Holman Hunt's over-sentimentalised picture offers the same message. Jesus, bearing light, is standing at the door of our lives, a door that is overgrown with the weeds of sin. Note that there is no handle on the door. Jesus will only "come in" if we ask him.

Here are the key words from the book of Revelation.

Listen! I stand at the door and knock; if any hear my voice and open the door, I will come into their house and eat with them, and they will eat with me.