If you want to know moire - read the book! 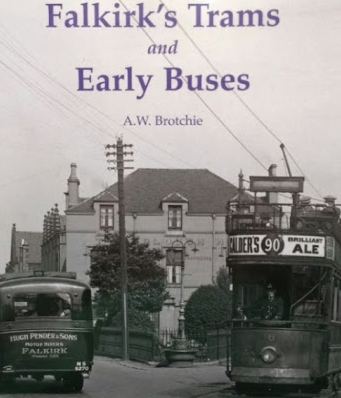 
Basically, the trams ran in a circular route, mainly single track with passing loops. An extension east  from town centre to Laurieston was opened later and closed earlier; so, rather than trying to précis the book, fbb will concentrate on an overview of the system as it was operated in the 1930s. (click on the map below for an enlargement) 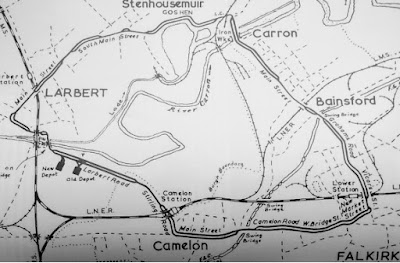 We start our tour in Upper Newmarket Street in the centre of Falkirk. Here is an "anti-clockwise" tram ... 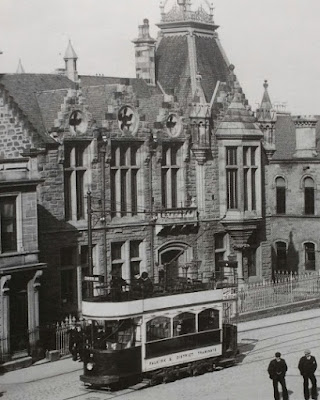 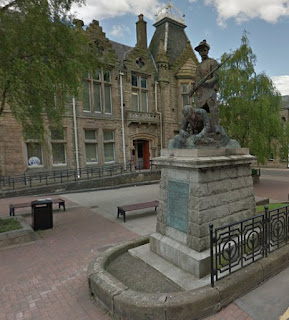 Turning to face east, was can, again, see that not everything has changed. 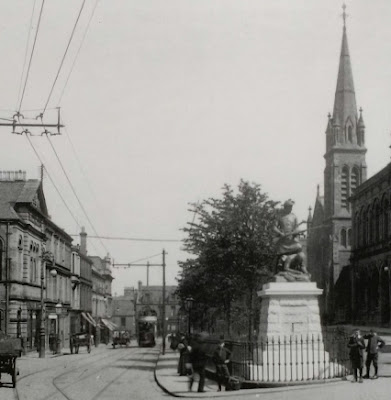 In this case the tram appears to be on a clockwise run and is in one of the many passing loops. The gabled building, its immediate neighbours and the church spire can still be picked out. 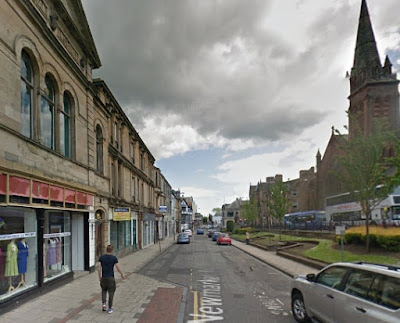 At the end of Newmarket Street we will be turning North, travelling anti-clockwise and joining Grahams Road to pass Falkirk Grahamston Station. 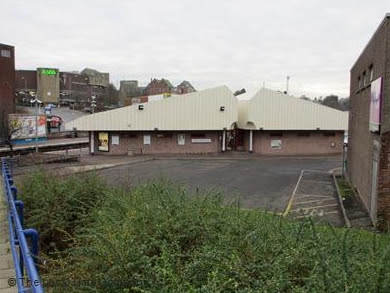 It was rebuilt in 1985/6 in a rather ugly style. Somehow the original has a greater aura of quality. 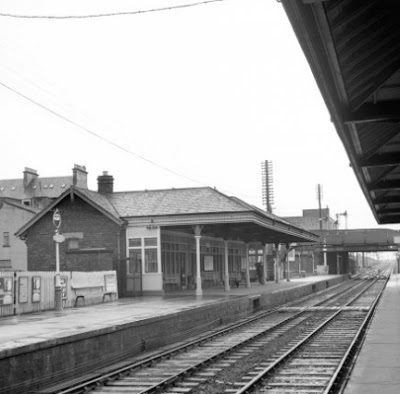 We know from yesterday's blog, that Falkirk was, essentially, an industrial town with numerous examples of heavy industry, particularly iron works. The tram ride northbound would have confirmed this. 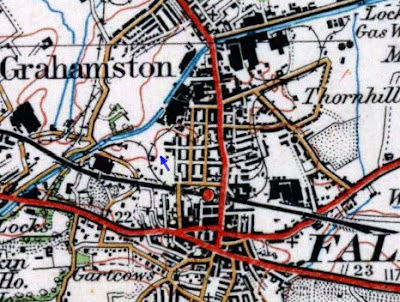 The road was ribbon development from the early 1900s with housing, local shops and pubs supporting the various "works". Here are tram passes the Oddfellows Hall ... 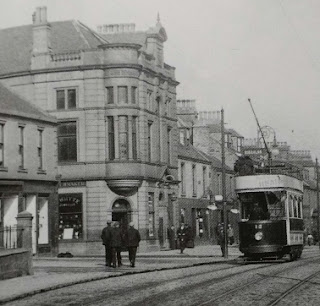 ... which, together with some of its neighbours, still stands. 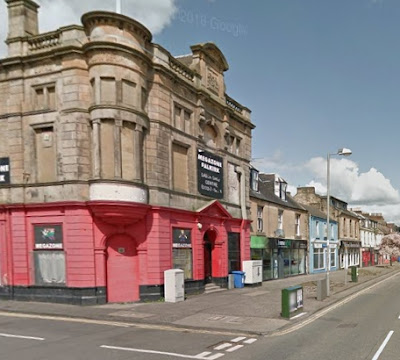 When Google viewed the street it was a Mergazone Laser game place ... 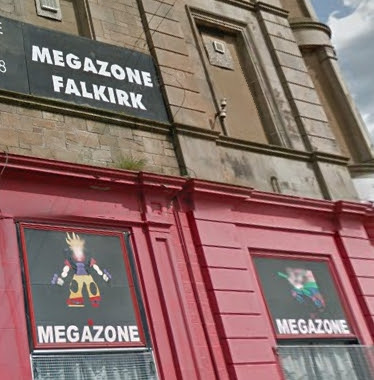 For the record, the Oddfellows is an organisation that practices philanthropy in general and the welfare of its members in particular. Its origins are obscure but it retains a significant world-wide membership - but no longer, it appears, in Falkirk.

The road, and way beck when the tram crosses the Forth and Clyde Canal at Bainsford. 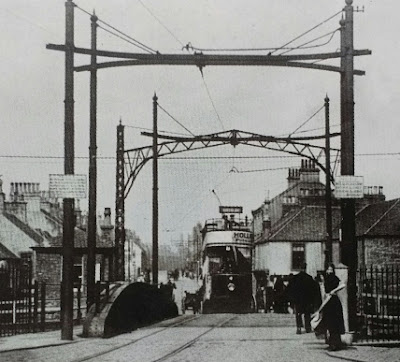 The book explained the rather strange support for the overhead wires. Apparently the far set of poles were planted right in the middle of the towpath and the canal owners were not very pleased! The tramway was obliged to erect the cantilevered structure on the far side of the path. 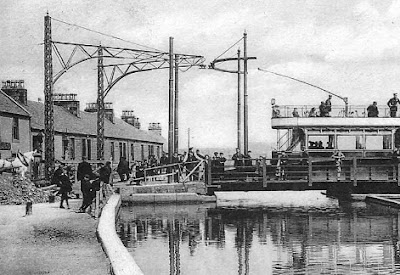 The site is almost unrecognisable today, but look carefully and you will see ... 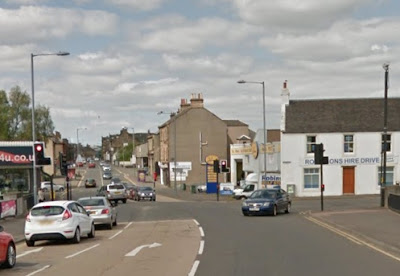 ... the white building to the right of the tram.

The next stop will be the Carron iron works. 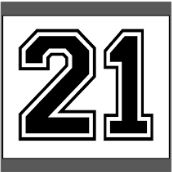 Like tells the story of the Shepherds. As a doctor and (possibly) a non-Jew, he is not as interested in those twp dozen Messianic prophecies as Matthew is. Like is a people person. 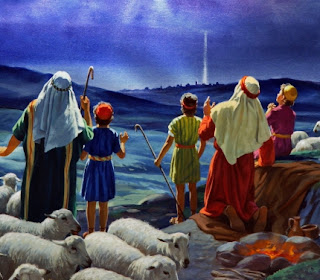 Luke's readers would have known all about Shepherds but today's Christmas revellers have been presented with innumerable sanitised and folksy versions of the narrative that the power of the original is almost completely lost.

First, forget the star : there wasn't one! It appeared much later.

Second, forget the pretty costumes. These were the zero hours contract workers of new millennium. A "good" shepherd was a rarity, a precious commodity. This was a badly paid job and the cold, cold nights would have been hard to endure. 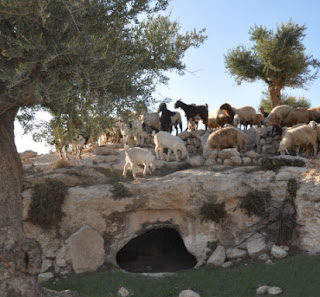 It was poor quality scrub land; the sheep would have been scrawny and the conversation far from wholesome!

With that in mind let's start on the story:-

And who wouldn't be - even rough, tough, hard living hard swearing shepherds.

But not just one angel - a whole flock of the pesky beasties!

Suddenly a great army of heaven's angels appeared with the angel, singing praises to God.

We can only speculate about what they actually experienced but certainly NO WINGS; angels are only describe with wings in visions of heaven. Long haired creatures in frocks defying the laws of gravity? 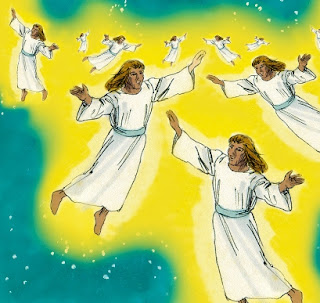 How would a hard-nosed shepherd describe a super-natural and scary "happening"? Your guess is a good as mine.