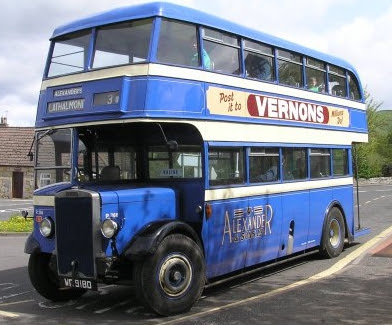 Alexanders bought out the Falkirk tram service and the service remained "circular" until relatively recently, as indicated by services 10, 11 and 12 from the dying days of the xephos system.

All three ran "both ways round" with route variations between Larbert and Carron works.

Service 10
This ran via Lochlands (a turn off Stirling Road) at Larbert and via Muirlands Road and Antonshill at Stenhousemuir, served currently by service 7. 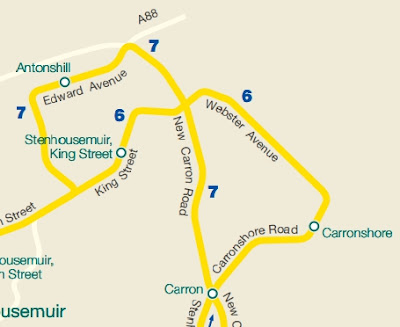 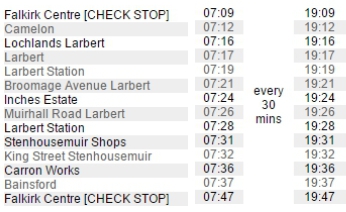 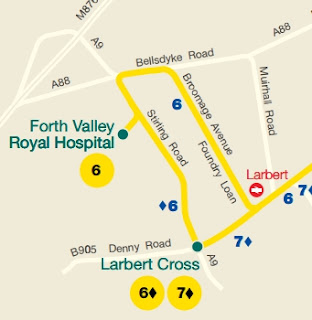 ... before a more direct King Street and Carron Road,

This went via Lamond View in Stenhousemuir (round the back of Asda and no longer served - ?) ... 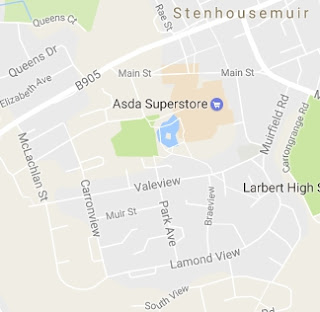 ... then via King Street and Carronshore, a mixture of today's 6 and 7. Google Maps and Streetview show stops on Lamond View ... 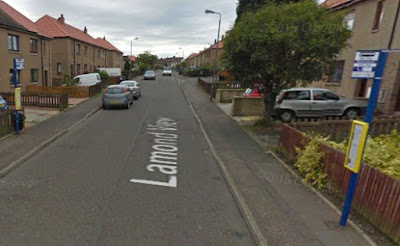 ... but Traveline admits of no service whilst requiring a walk to the aforementioned ASDA.

The whole lot provided a bus every ten minutes round the former tram circle but diverted via newer bits of Stemhousemuir and Carron.

To this we must add the inter-urban 38 which still runs from Edinburgh to Stirling. This added another half hourly frequency between Falkirk and Larbert Cross. 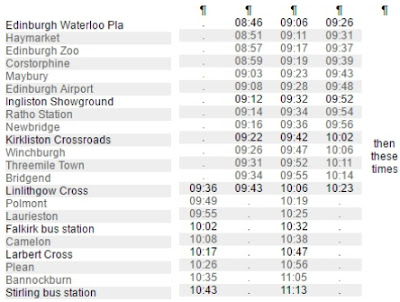 That was all in the early 2000s. But what has happened since?

Three changes feature in the area's bus services today. There has been an overall reduction in frequency, the big new Forth Valley Hospital at Larbert has opened and nothing now circles!

Running via Carron Works (as was) we have services 6 and 7. The two together pick up most of the bits of the more frequent circulars as outlined above. The 6 (every 30 minutes) uses part of the Larbert loop of old, and runs via Carronshore. 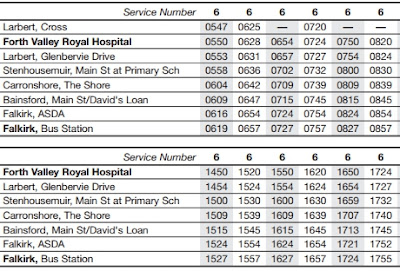 Service 7 divers via Antonshill at Stenhousemuir ...

... but gets no further than ASDA where it had a little bit of bus only road outside the Library. 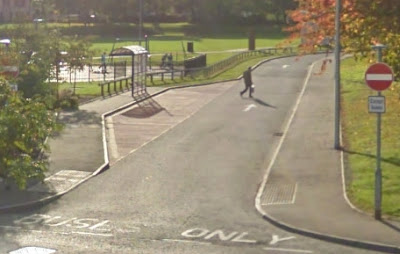 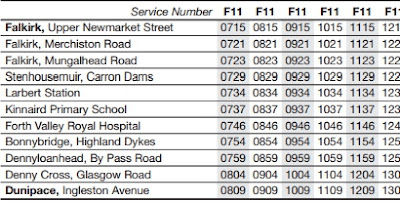 ... and uses Muirhall Road in Larbert, another vestige of the circular routes. 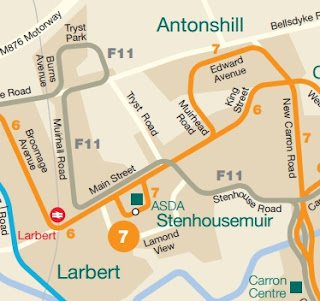 Putting this lot together we can see that there are now FOUR buses an hour via Bainsford and the former Carron Works, replacing SIX on the earlier 10, 11 and 12 circulars.

In fairness to all concerned, mention should be made of the 5A/5C route (every 20 minutes) ... 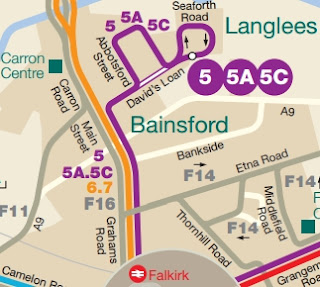 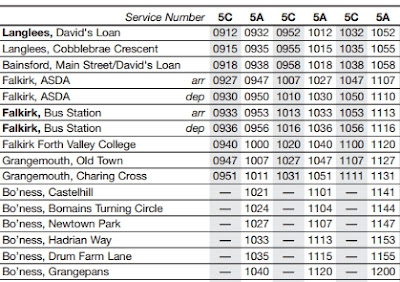 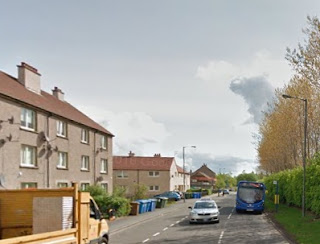 You can tell that it is  service 5A/5C by the branding on the new-ish) blue bus. 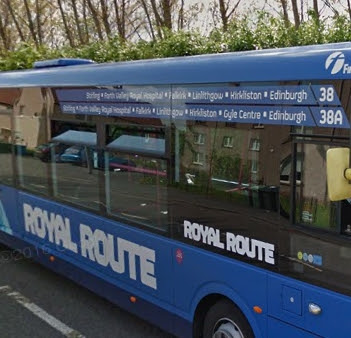 Hey ho: three jeers for the effectiveness of route-branded livery!

The service on the other side of the circle, however, is now only provided by the 38 which IS (correctly!) labelled as "The Royal Route" ... 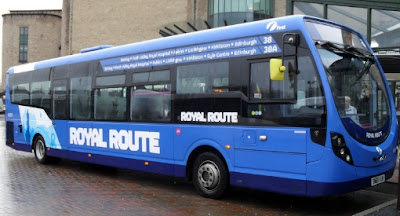 ... and runs every 15 minutes all the way from Edinburgh to Stirling. 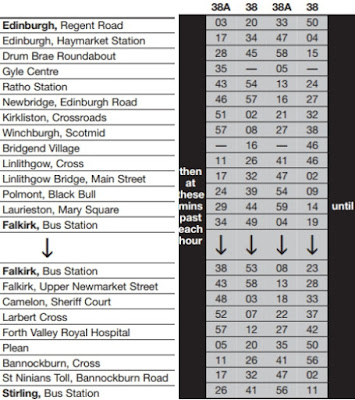 Despite this improvement, there were once EIGHT buses an hour via Camelon to Larbert; there are now only FOUR.

First Bus (successors to Alexander Midland) have demonstrated some clever re-jigging to ensure that everywhere gets an adequate level of service but with lower frequencies all round. Most former tram users (more likely their descendants!) can get where they want to go but with the added bonus of links to the new Hospital. 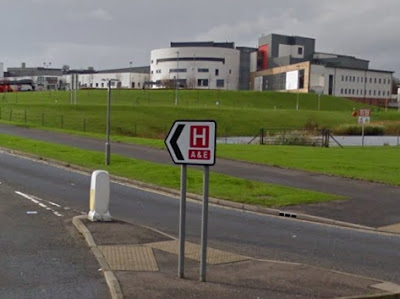 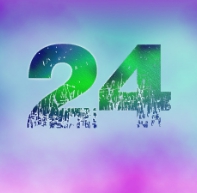 Thus it was that sometime in the middle of the night the shepherds left their sheep behind (note: NO SHEEP at the manger!) and whizzed down the hill to Bethlehem. Luke's Gospel again:-

When the angels went away from them back into heaven, the shepherds said to one another, “Let's go to Bethlehem and see this thing that has happened, which the Lord has told us.”

So they hurried off and found Mary and Joseph and saw the baby lying in the manger. When the shepherds saw him, they told them what the angel had said about the child.

All who heard it were amazed at what the shepherds said. 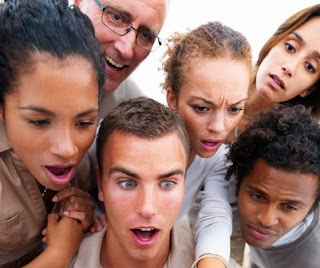 God on Earth : either truly amazing or a potty idea

Mary remembered all these things and thought deeply about them. 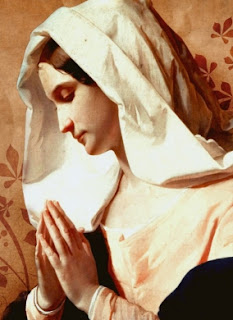 Could this really be God's plan to "do something" about the bad things in the world?

The shepherds went back, singing praises to God for all they had heard and seen; it had been just as the angel had told them. 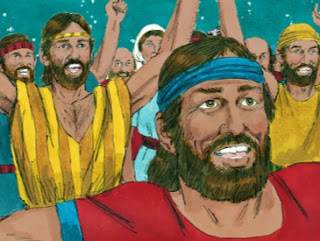 But if it WAS and IS true? If ... there would be a very good reason to celebrate Christmas 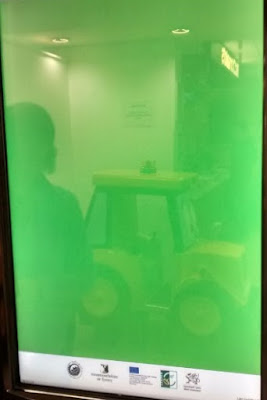 Tap for the detail.

With the helpful result:- 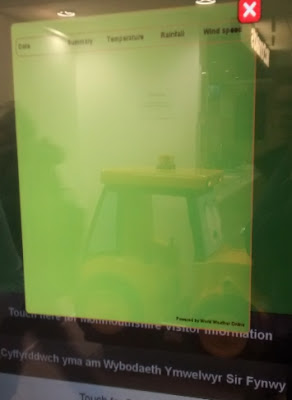 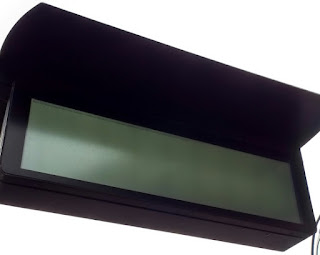 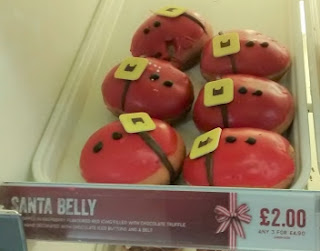