Larbert to Falkirk : Circle is Complete 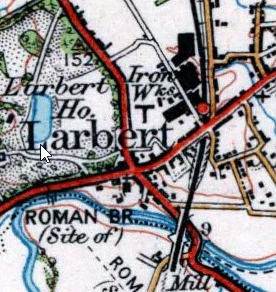 The boundary between Stenhousemuir and Larbert was marked by the little stream in the top right of the map extract above. The station, once quite grand ... 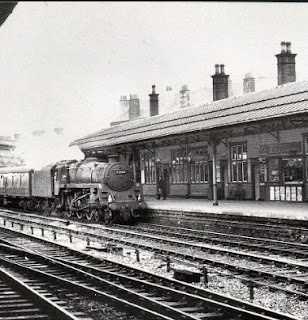 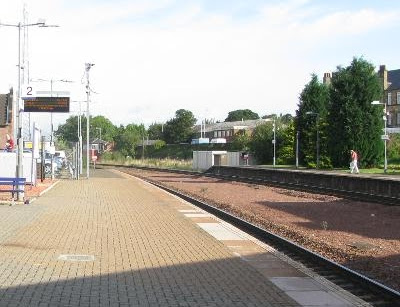 The station is now just a typical suburban building of no great merit ... 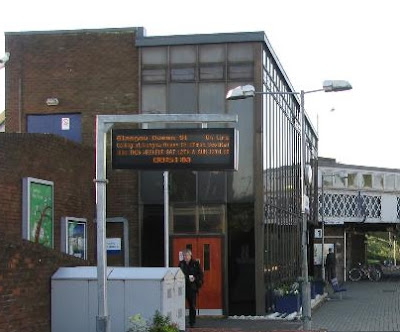 ,,, with an unimposing entrance, still with First branding when the street view viewer drove past. 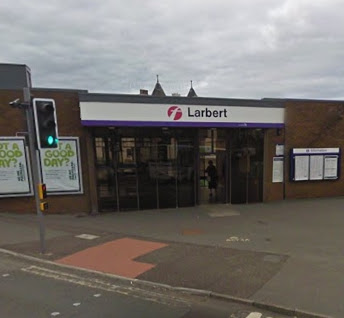 Across the tracks from this entrance, the Station Hotel still trades. 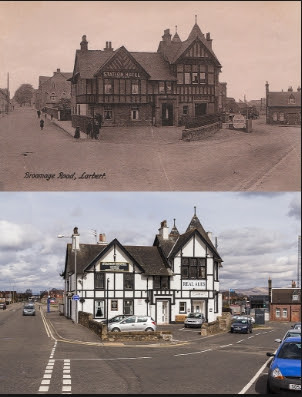 Travelling west beyond the station, you come to Larbert Cross(roads), Here is a tram about to turn sharp left on to Falkirk Road; but the junction is unrecognisable in 2016! 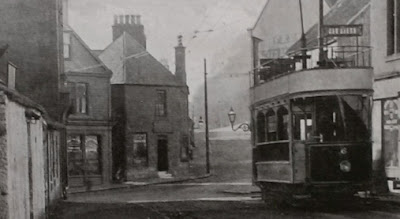 The tram is about to turn from Main Street into Falkirk Road. The view back up towards the cross is equally baffling ... 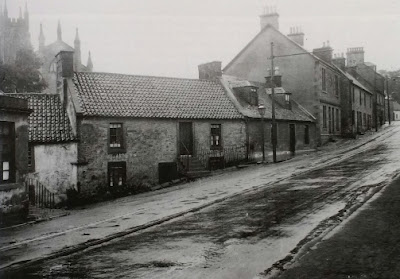 ... until you realise that everything on the left has been demolished to make way for the "new" Stirling Road ... 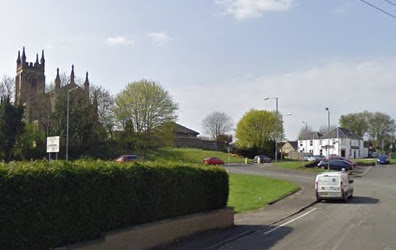 ... which runs behind the site of the old buildings and in front of the church. The white building (above right; The Commercial Hotel) is just visible on the "old" picture, but only just.

Trams (and both original and realigned roads) then wiggle under the railway arches, Here is a Falkirk-bound vehicle passing the Mill (right) with the arches in the background.

And here is the same view today ... 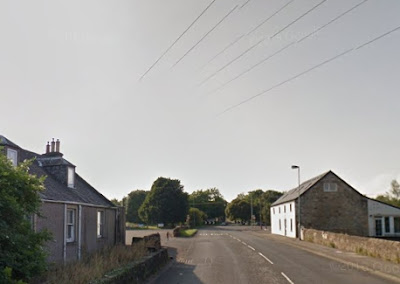 ... with arches hidden in afforestation! Light industry borders the Stirling Road, including the site of the old tram depot and, nearby, the present First bus depot. 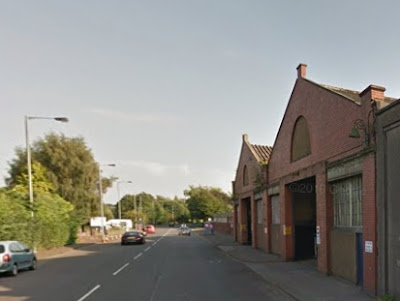 Up-market housing dominates the approaches to the town ... 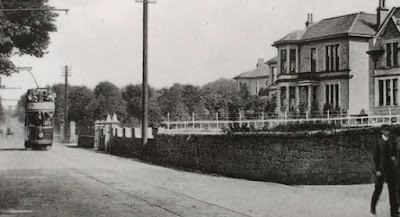 ... where the style, if not the detail, can be seen today. 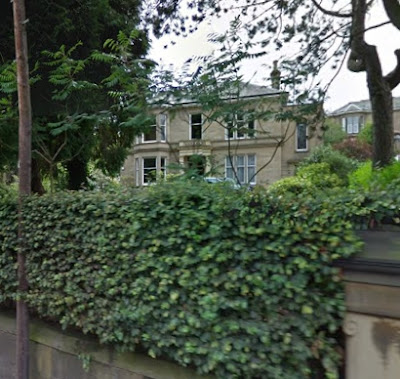 Stirling Road runs under the railway again, this time at Camelon station. 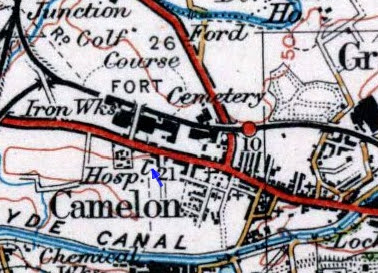 But where is today's edifice? 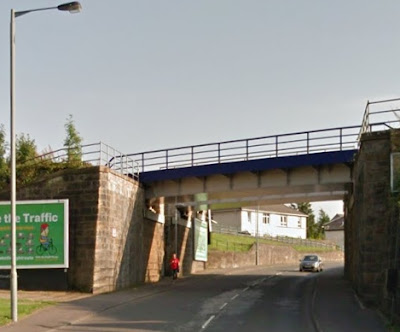 It should be there behind the street lamp with steps up ti the platform near the redshirt - but it isn'r. What's going on?

The original was a single building on an island platform ... 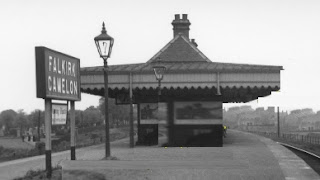 ... which closed in 1967. It was re-opened in 1994 on a new site further west. It is cunningly hidden on a industrial estate. Note, please, the station sign far right but absolutely no sign of station. It lies behind the warehouse, lower left. 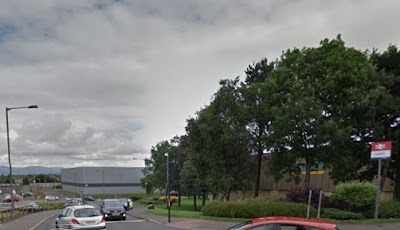 It is a fine example of the footbridge builders art ... 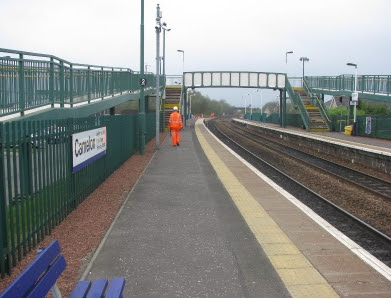 ... and provides the traveller with a small shelter and a self-service ticket machine. 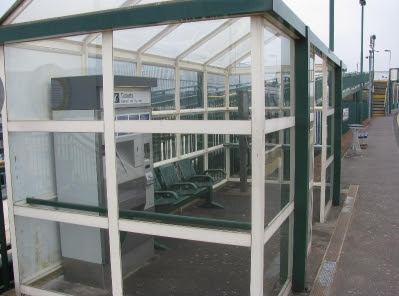 From Camelon, direct train services run to Glasgow (via Cumbernauld), Edinburgh and Dunblane, with a change required at Stirling for stations to Perth, Dundee, Aberdeen and Inverness, change at Glasgow or Edinburgh for trains to the south of Scotland and to England.

From Camelon the tram made a bee line for the town centre with another canal swing bridge on the way. All of this has gone now, so comparison piccies are pointless.

But a fascinating system, well documented in the excellent book that Mrs fbb spotted in Seartin Public Library. 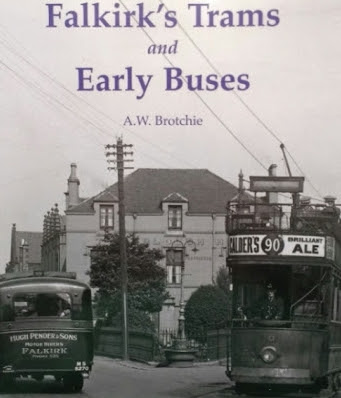 Tomorrow, amongst a few other snippets, we take a look at what operated route the circle today. 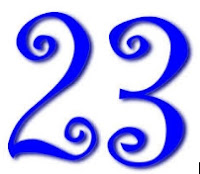 The shepherds are, at first, fearful of the angel. It's message seems stratnge. How could the new king, the Messiah, be born in a cave near Bethlehem - even of that was the ancestral home of the great King David?

And yes, it was most likely a cave, not a stable or a cattle shed. The bible only says that there was "no room at the inn" and that Jesus was "laid in a manger". Animals were kept in caves near the old settlement at Bethlehem.

But there's one more angelic prognostication to consider. 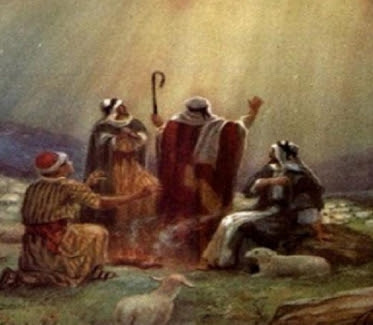 One of the most misquoted and misunderstood passengers in all 66 books of the Bible. 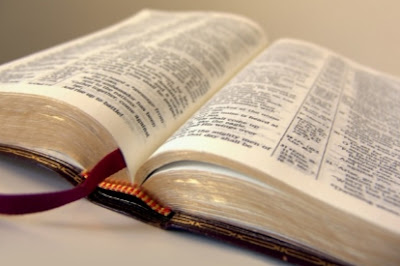 It doesn't say, it never did say in any version, "Peace on earth and goodwill to all men." The but that isn't quoted is the critical bit.

The gift of peace on earth is part of the new deal (the new covenant - remember?) between God and Man. To be part of the deal, Mankind has to be "pleasing God".

Next Falkirk blog (plus) : Saturday 24th December
Posted by fatbusbloke at 02:00