News breaks a few weeks ago that Meridian Bus was withdrawing its (commercial) W4.

The plan for replacement was rvealed by our Northampton correspondent.

From December 7th alternate journeys become service 44 and from Church Street run to Barnwell Road (Redwell) replacing part of W4 and reducing journeys to Berrymoor to hourly from every 30 mins. Everything finishes about 1800 hours and there are no Sunday journeys. 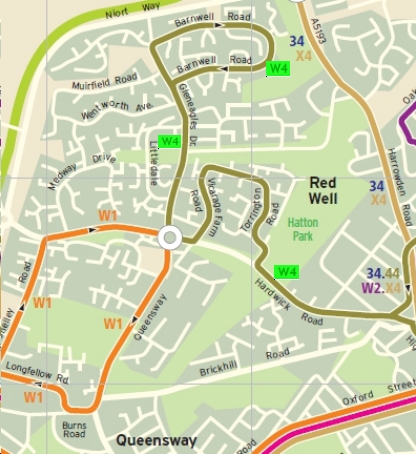 The W4 retains an hourly service (good) but the Berrymoor circular ... 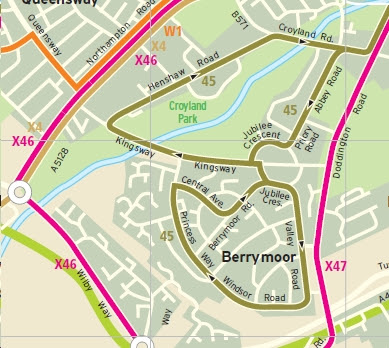 ... loses half of its long-standing half hourly frequency.The new 44 and 45 timetable is visually less than helpful as it tries to maintain the half hourly headway between Wellingborough and Irthlingborough. 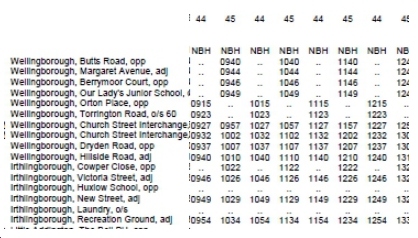 The current on-line version of the timetable, courtesy of Northamptonshire Council,is particularly incompreensible with ten Wellingboroughs and six Irthlingboroughs; and there is no mention of the W4 map locations of Redwell and Barnwell Road.

Replace a service and change all the names. Good plan.


As far as I can currently see there is no replacement for the bit of W4 which went to Isebrook Hospital. 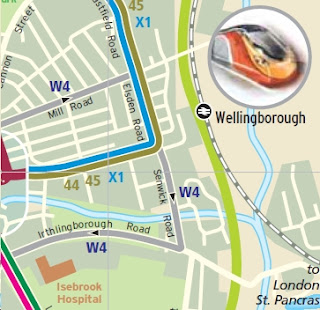 The W4 used to run to the Station itself where you can catch a Pendolino to St Pancras according to Northampton Councty Council's cartography department. Alan continues:-

Wellingborough is the fourth largest town in Northamptonshire. The Midland Railway built the station where it suited the Midland Railway, just under a mile from the town centre. Stagecoach bus services X1 and 45 pass by on nearby Elsden Road. Meridian Bus service W4 from Barnwell Road to Tesco also passes that way until December 5th when the operator has registered the cancellation of the service.


The route used to be run by Centrebus and before that by Souls of Olney. We know this because both operators' timetables are still misleadingly displayed in the shelters at the main town centre bus stops in Church Street.

There is going to be no such problem with removing any printed timetables for the Meridian service because as far as I, an expert at finding hidden printed bus timetables, am aware no one, including the service operator, has ever produced any. 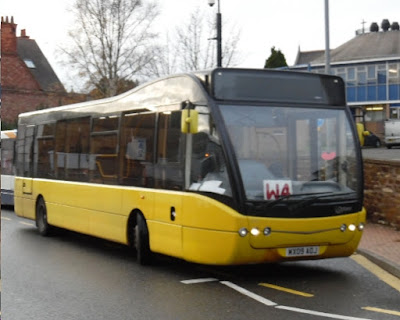 The service is currently operated by an anonymous vehicle still in the livery in which it used to trundle round Hampshire in the ownership of "Fleet Buzz" ... 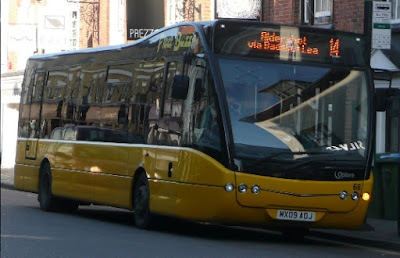 ... with merely a piece of cardboard showing the route number in the windscreen. This route is a case study in how not to run a bus service by both an operator and a local council.

The only source of printed Stagecoach bus timetables is upstairs in Wellingborough Library on a back wall where few will find them.


If you were an unfortunate visitor alighting from your bus in Church Street seeking a train there is no sign that the town possess a railway station or where it might be. The revised services 44 and 45 are operated by Stagecoach Midlands (prop. Sir B. Souter). The train operator is East Midlands Trains (prop. Sir B. Souter) so the new services will divert and call at the railway station as the W4 once used to do, albeit infrequently.

They will, won't they?


A replacement for the W4 is announced. Instead of an hourly service with a two hour gap, Centrebus will run just three trips via the Hospital. BIG DEAL. Please click on the timetable to enjoy its lavishness in a more readable size.


Timetable for Soul's W4 still in the case at Wellingborough railway station where no buses now call since Meridian altered the route. But, O frabjous day, round the corner in Elsden Road there is actually a printed timetable for Meridian service W4. The rare manuscripts department at the British Library is hoping to acquire this once he cancels the service next weekend. Times for Souls and Centrebus W4 still on display at Church Street. Wellingborough Library and Museum both have takeaway Stagecoach timetables. No sign of anything for Centrebus W8 or 34.


Stagecoach appear to have installed new timetable notices where possible and stuff for their new routes is available in the Library. The old Souls and Centrebus timetable have been removed from central stops but, never fear all ye who seek omnibological archaeology ... 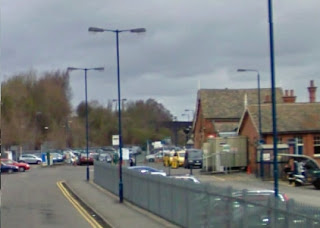 ... Soul's timetable, plus pole and stop, are still evident at the station. No buses call there.

More joyful is the arrival of comprehensible timetables on Stagecoach's web site ... 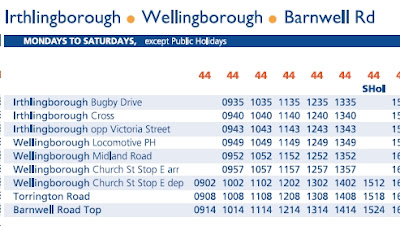 ... which do now admit to going to Barnwell Road.

One key question remains. Is all this really really the way to encourage public transport use. 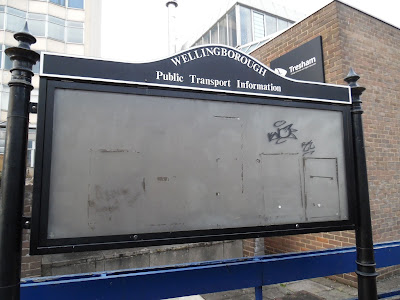 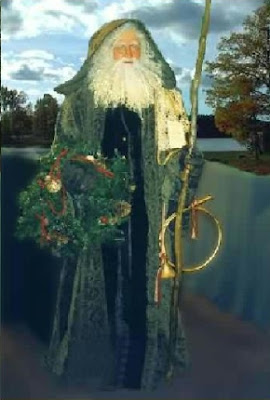 But he's not fat, jolly or dressed in red? How come?


Like so much that clutters our Christmas, the gent illustrated above has his origins in pre-Christmas pagnanism. We see a similar character on pub signs. 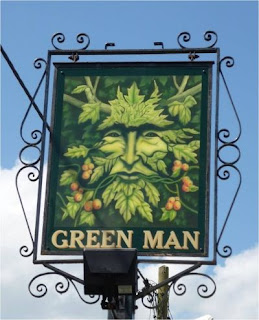 The Green Man welcomed or encouraged the coming of Spring and was the bringer of great midwinter jollity and celebration. In the 17th century Christianity (in its broadest sense) started to personify the whole feasting and boozing idea of Christmas, encouraged by the Father OF Christmas.

Somewhere along the way Father Christmas became intermingled with Santa Claus, an equally dodgy corruption of Saint Nicholas; thereafter the nosh and bevvy Christmas, the exchanging of gifts and general jollity was sort of justified by the "Leader of Jollity".


One thing is absolutely clear; Father Christmas had (and has) absolutely no link to the arrival of Emmanuel. And no discoverable link with the gifts of the Wise Men.

Next bus blog : Friday 11th December
Posted by fatbusbloke at 02:00