But first, more about those trains from Exeter.

There was some debate in yesterday's blog about the wisdom (or otherwise) of the "exciting" new evening peak hour service from Exeter; the general feeling being that the 1624 followed by a 1636 was, well, plain daft.

According to an "informed source" it is actually dafter than it appears.


Up until this change, the 1624 was a two unit six car train and, from fbb's personal experience, it was busy and often had standing passengers from Exeter Central. From Monday 14th the 1624 has become a one unit three car train. But ludicrously, the 1636 is scheduled for a two car class 158. 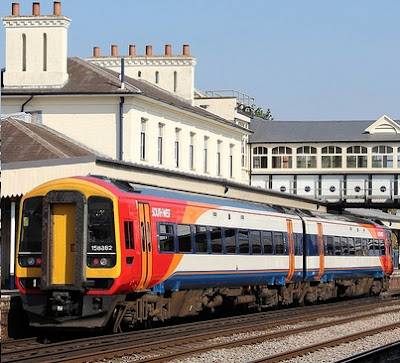 If this "informed source" is correct, this means that, to improve the service, a crowded six car train is replaced by two trains totalling five cars. 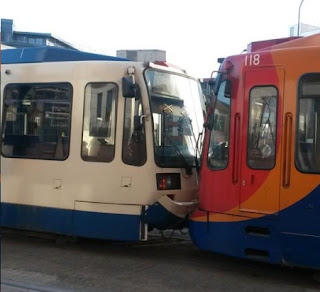 the good news is that the cream and not-Sheffield-Transport-blue unit is now mended and here is its "back from holiday" snap sent in by Roy, a Sheffield correspondent. Here is the rebuilt end ... 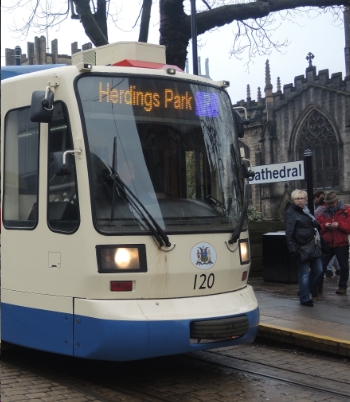 ... and the undamaged back end for comparison. 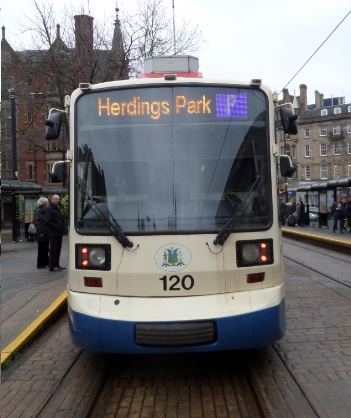 Erm. Or is it the other way round?


As a consequence, "Purple" trams are now running again between Herdings Park and Cathedral. Doubtless this will be xtended to Meadowhell when th seconded collision victim is back on track.

We're pleased to announce that following comprehensive repairs and successful testing today, Wednesday 9 December, one of the damaged trams has been returned to service.

This means that from the start of service on Thursday 10 December Purple route services will resume to and from Herdings Park, as detailed below;

Monday to Friday - services will operate between Herdings Park and Cathedral. Customers to or from Meadowhall should change at Fitzalan Square and cross to the opposite platform

Oddly, the second tram was less badly bent but other "technical issues" have so far been unresolvable. WD40, gaffer tape and a lump hammer (fbb's vehicle repair tools) have proved inadequate.

Thunderbirds Tram-Trains are GO! Or Not!

In 2008, the Huddersfield Examiner announced that the first Tram-Train services would run from Sheffield to Huddersfield. 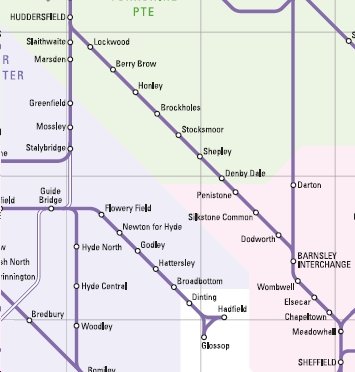 Here are extracts from the article.

Tram-trains are lighter and greener than conventional trains. They use less fuel and weigh less which reduces wear and tear on tracks therefore decreasing the need for disruptive maintenance works. Tram-trains have faster acceleration and deceleration rates so they can also offer passengers better journey times.

The trial, which starts in 2010 and will take two years, will look at the environmental benefits, operating costs and technical suitability of the tram-trains as well as testing how popular the vehicles are with passengers on the route. There is also an option for a second phase which would test the vehicles on the Sheffield Supertram system to see what additional benefits the vehicles can deliver when extended onto city centre tram lines. 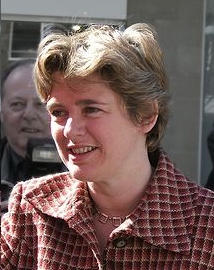 Announcing the trial project then-labour Transport Secretary Ruth Kelly said: “Tram-trains will bring quicker journeys and offer a greener travel option for passengers in Yorkshire. “This trial – the first in Britain – could herald the start of a new era in public transport."

But two years later it was all-change.

In September 2009, it was cancelled in favour of a pilot of electric tram-trains between Rotherham and Sheffield’s Supertram network. As part of the evaluation, a Network Rail freight line was to be equipped with 750V dc tramway electrification, and in July 2011 Vossloh was selected as vehicle bidder for a service intended to commence in 2014.

But that didn't happen either.

Tomorrow we will complete the story.

17th
And then it was a host. Gospel writer Luke explains:-

The angel said to them, “Don't be afraid! I am here with good news for you, which will bring great joy to all the people. This very day in David's town your Savior was born; Christ the Lord! And this is what will prove it to you: you will find a baby wrapped in cloths and lying in a manger.”

As an aside (but an important one), the message was NOT "peace on earth and goodwill to all men." Peace and goodwill, says the apparition, is a gift ONLY for those with whom God is pleased. Not the same thing at all. And by no means universal.

When the angels went away from them back into heaven, the shepherds said to one another, “Let's go to Bethlehem and see this thing that has happened, which the Lord has told us.”

Any attempt to draw a supernatural even is bound to fail by definition. it it's a super-natural event, then any natural drawing with be silly and inadequate. 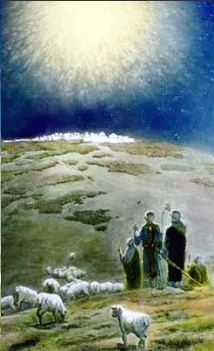 What matters is that these rough-and-ready night-shift workers left their duties at great risk to their future employment and set off for the town to visit ... 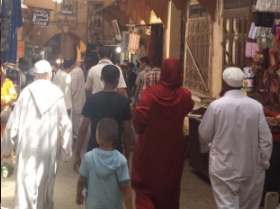 Utterly ludicrous - unless it was true.

Next bus blog : Friday 19th December
Posted by fatbusbloke at 02:00