And the Range is Spar-klin!
Thinking back to yesterday's blog, you can buy a Bobby Car truck in HO ... 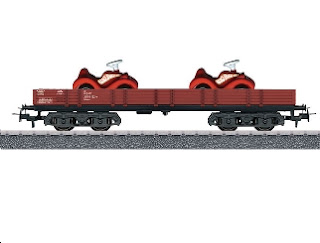 ... and, of course, at Christmas, you can get your Märklin Advent Calendar which says little about Advent and much more about what you can buy for Christmas, sorry Spendmas. 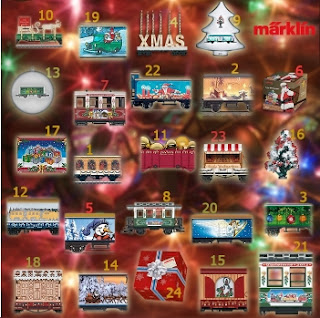 But before we look more closely at what the Company produces, here is a little quiz.

What size is each of these three models? 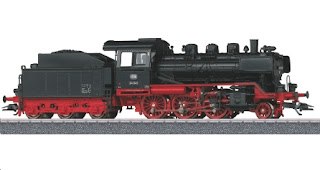 Answers later in the blog.

There is one big difference between Märklin and all other current model railway systems. When the range started in 1935 there were only three rail systems; the juice was fed into the loco via the centre rail and return was via the two running rails. Although unrealistic for steam trains it had the huge advantage that wiring the layout was much simpler than for the later-developed two rail.

So the "teckniker von Göppingen" came up with a cunning plan. Replace the centre rail with a row of electrified studs which would be less visually intrusive than an unnecessary bit of line. 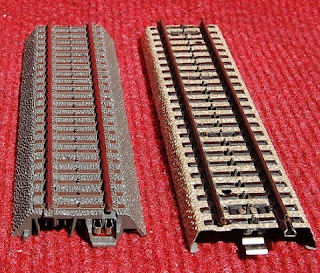 Studs are tricky at points, however, as they have to rise gently in height to ensure that the collector shoe doesn't get mangled by or mangle the track. 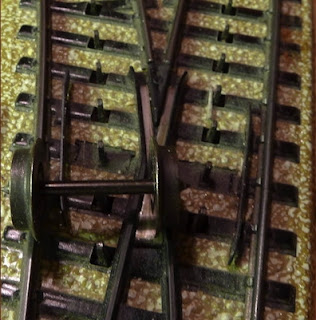 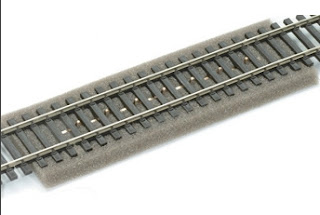 ... and taller studs for pointwork. 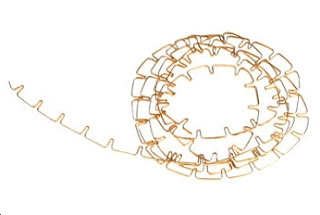 fbb is not at all sure how you slide from one height to another without a derailment creating bump. And if you really don't want little studs in you track, you can buy Trix branded versions of many of the Märklin products for operation on the conventional two rail system.

Despite this apparent complexity and higher cost, the Märklin range became synonymous with model railways and remains so in Germany and many other European countries. It is a position Hornby held in the UK until the arrival of Triang in the 50s.

The German company has led the way in manufacturing locos, coaches, wagons and scenic items with a superb standard of intricate detail. Here, for example, is a simple HO diesel shunting loco. 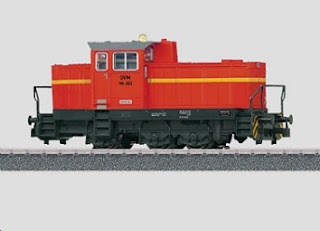 The picture benefits from a bit of enlargement:- 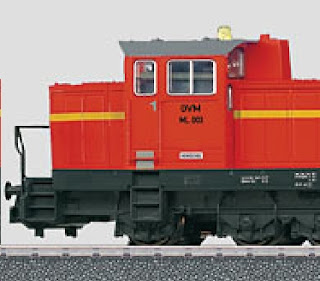 And this is a "toy train" product called "Startup". For comparison, see the Hornby "Railroad" shunter offered as a similar "beginners" product. 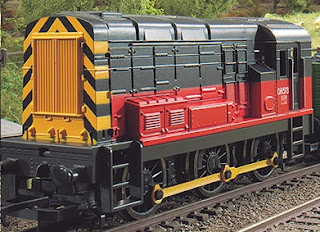 Hornby has a one-piece body moulding with no embellishments bar a bit of paint, sitting on an inaccurate chassis. For the unchurched in these matters, diesel shunters have wheels inside the chassis and connecting rods outside. Gottit? 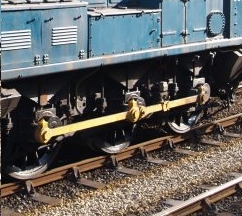 Back to Märklin. Let's now answer the quiz and, at the same time wince at the price!

Z scale (1:220) was introduced by the Märklin company in 1972, and is one of the smallest commercially available model railway scales with a track gauge of 6.5 mm/​0.256 in. Model trains, track, structures, and human/animal figures are readily available in European, North American, and Japanese styles from a variety of manufacturers.

And if all those numbers confuse you, here is a simple graphic that shows the relationship between Z, HO and 1 scales. You may need to click on the pic to enlarge.

It is really hard to communicate the superb detail and the excellent quality of the products; but, boy oh boy, do you need deep pockets to develop even a small layout. UK models are becoming more and more detailed and sophistcated with consequent rising prices.

fbb will stick to his second hand (pre-owned) purchases! But, if Santa reads this blog, he would like, for nostalgia's sake, one of the beautiful OO models of an O2 4-4-0 tank locomotive as spotted (and ridden behind) back in the mists of antiquity on the Isle of Wight.

One comment writer on yesterday' blog remembered an iconic Märklin loco, namely the Crocodile. It is still available in the current range. Click thereupon to enjoy its magnificence. 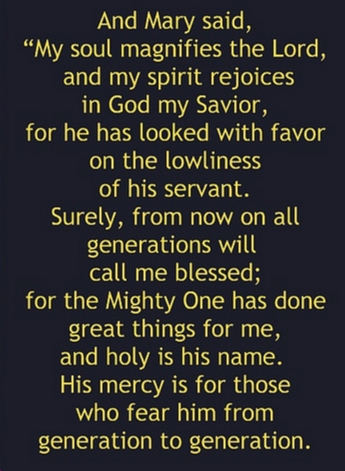 Mary's song of praise, after he chat with Clarence (sorry Gabriel) the Angel, comes to us with the posh sounding title "The Magnificat". That's because in ancient Bible translations she begins with "My soul doth magnify the Lord" although magnifying God seems a bit tricky as He is, by definition, the biggest there is and bigger still! "Praises" is a better word.

The modern Hymn picks up the theme and moves the subject matter from Mary to all of us.

And if there is no more than a grain of truth in the poetry, Christmas becomes much more than tinsel and turkey. Surely it becomes a life changing event?

Next bus/tram blog : Monday 7th December
Posted by fatbusbloke at 02:00