But first : The fbb's journey (by car) to Abergynolwyn passed pleasantly and without incident. Luncheon was taken at Burger King Builth Wells ... 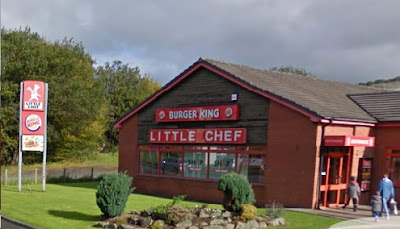 ... where fbb was truly underwhelmed with the lavish Christmas decorations. 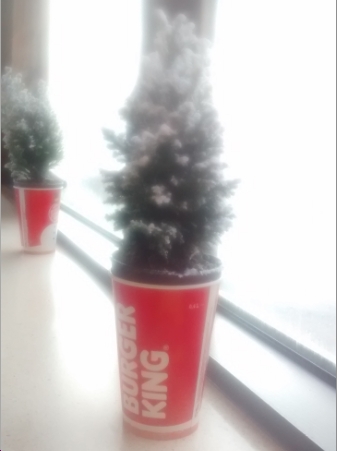 And second : Google's attempt to rule the world, example 435. Renaming stations. fbb's phone occasionally offers him a video compilation using a selection of pictures snapped during the previous day. The exciting video of fbb's trip to Exeter was entitled ... 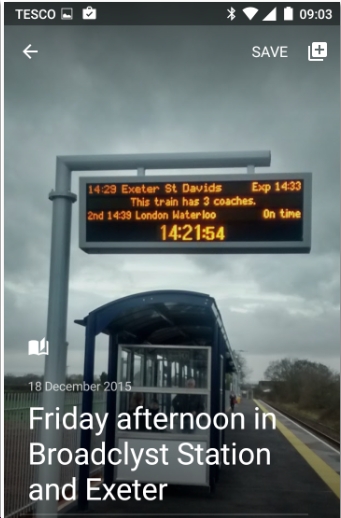 It seems that the great gigabyte grabbing google hasn't quite grasped that Cranbrook exists. Streetview has not yet viewed its civic delights.

Perhaps it was all a bad pre-Christmas dream?

In a past life, fbb bought five real buses and ran them for a few years. But this is a model bus, of which fbb has a small collection. The "rolls royce" of die-cast model buses is a company called, inexplicably, Creative Master Northcord.

Announced in November 2000, this new company is a joint venture between CML (Creative Master Limited - the major factory in China involved in model bus manufacture) and Northcord Transport, up to then famous for their range of Hong Kong transport books. The company ceased trading in late 2011 due to business difficulties. In October 2012, the Northcord Model Company was formed, having acquired many of the assets of the former company.

Their models are pricey. The one fbb bought retails at just under £35. OUCH. Models are often advertised at discount prices. Slightly less ouch! 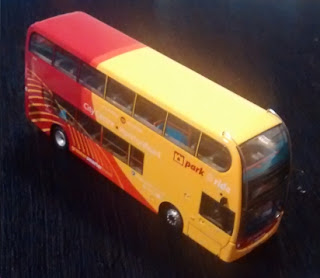 Note the exquisite detail, inside and out; silvered hubcaps and minute notices beside the door. 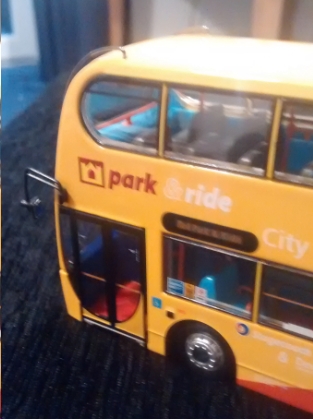 The wing mirrors are correctly reproduced and the glazing is flush with the body side. Internal grab rails are also modelled ... 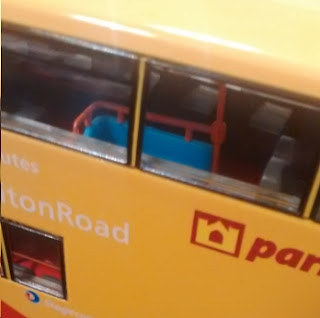 ... and there is even a representation of the engine hidden under a tiny boot lid. 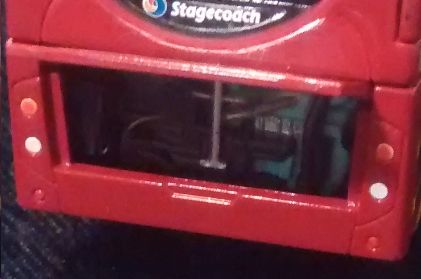 Some readers can rightly imagine the reaction of Mrs fbb when faced with such a selfish seasonal spend; but fbb can point out that the models were on offer to Stagecoach staff at a crackingly discounted price of £10.

Wonder how much fbb actually paid?

And here is a real "Red" Park and Ride bus.

Or is that a side view of the model?

A reminder. Devon County Council was keen to see extra trains between the capital and Honiton at the busy evening peak. A half hour frequency was sought but not delivered.

A usually reliable source had revealed that the 1624 from St Davids, 1628 from Central, hitherto a six coach train, was demoted to a three coach unit and the 1636 / 1640 "dupe"** was a two coach unit. By this cunning plan, the number of seats has been reduced by 16%. But was this "source" correct? 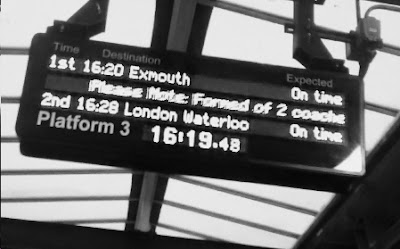 Below are the passengers cunning waiting for the front three of the six coach train ... 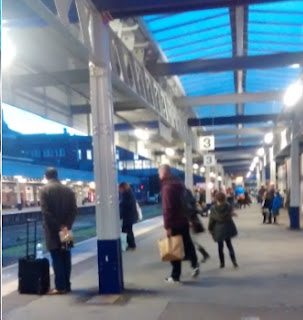 ... and here are the same people running back down the platform to squeeze on the three coaches now provided. 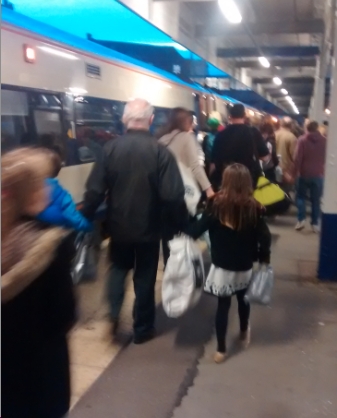 And here is the crush in the vestibule ... 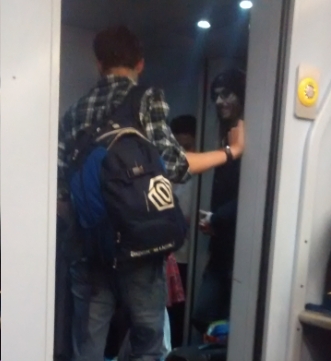 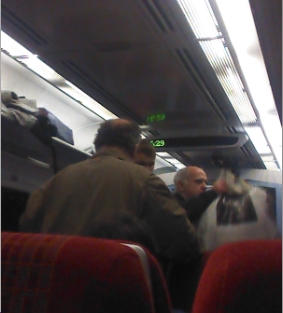 ... and the four sitting on and in the luggage rack. fbb would have liked to wait for the "dupe"** but sadly it did not stop at Broadclyst (aka Cranbrook). 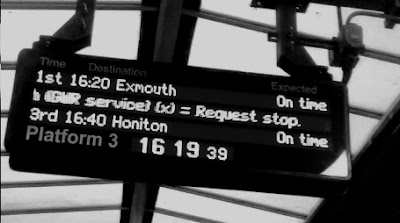 But, ever a slave to his journalistic art, fbb remained on Cranbrook Station to observe the 1640 train whizzing past. He even took a video of the experience; but had the camera the wrong way round so it was all sidewaysed. Solution; take a video of the video and produce something really awful in quality.
Way short of George Lucas standards!

EMPTY! (or very nearly so.)

Back to the drawing board, South West Trains.

How about coupling the two car unit to the back of the three car unit and detaching it at Honiton? Thus, in part, restoring capacity to the 1628?

** dupe - has two meanings:-
1. short for duplicate
2. to deceive or trick - as in providing an improved service with less capacity

21st
fbb took a set of lights to Abergynolwyn as did no 1 son. But they had no tree, so improvisation was the order of the day. Laydees and Gentel Men, we proudly present the fbb family Christmas TRIPOD. 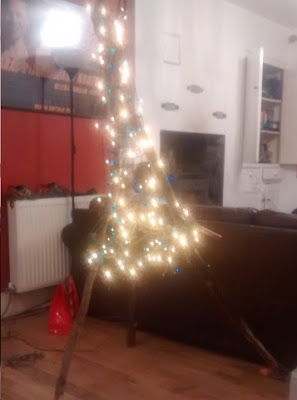 With ample space for prezzies below.

John, writer of the fourth gospel, is not interested in the Gift of Emmanuel as a baby; his mission statement was to explain to his readers why God revealed himself in human form.

The Word was the source of life, and this life brought light to people. The light shines in the darkness, and the darkness has never put it out. The Word was in the world, and though God made the world through him, yet the world did not recognize him. He came to his own country, but his own people did not receive him. Some, however, did receive him and believed in him; so he gave them the right to become God's children. 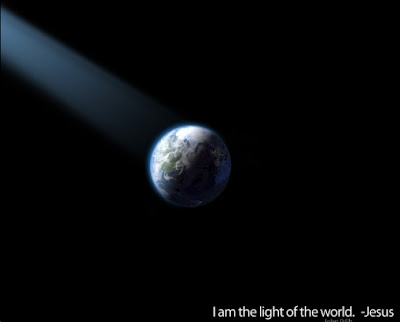 There is something astoundingly powerful about bringing light to a dark and damaged world. But even more astounding is the idea of replacing the dark corners of our lives with the light of Jesus.

Next bus blog : Tuesday 22nd December
Posted by fatbusbloke at 02:00