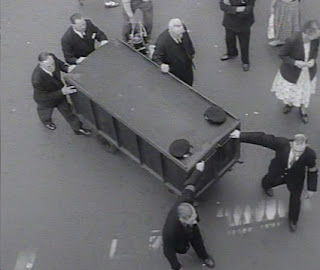 A mysterious trolley is trundled onto the platform at London Waterloo, respectfully trundled by strangely hatless railway staff. It is a clip from the classic railway film "Terminus", already reviewed in a previous blog (read again). Within the trolley's hallowed walls is a ... 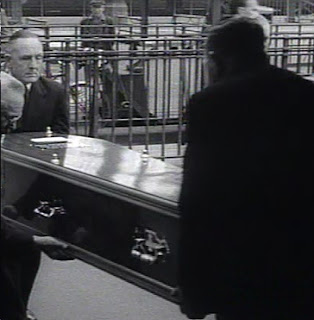 ... coffin, probably taking its final journey in the guards van of a train going to ... 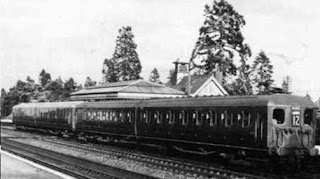 ... Brookwood Station, first stop past Woking on the line to Southampton. From here the casket would be carried by hearse to its burial in Brookwood Cemetery, formerly the London Necropolis. 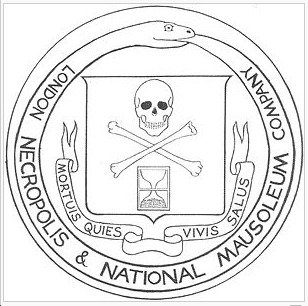 At one time, a private Necropolis terminus was provided just outside Waterloo station. The original station (1854-1902) was located between York Street (now Leake Street) and the Westminster Bridge Road. 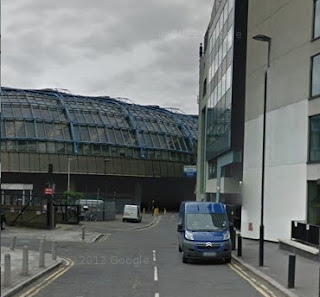 This station was replaced by a more extensive building in 1902. This was due to the complete reconstruction of Waterloo Station. The original terminus was demolished at about this time.

There is now no evidence of this first station as things have changed yet again!

The new station was located at 121 Westminster Bridge Road and continued to provide railway funeral traffic until the station was bombed on the night of 16-17th April 1941.

The service was never restarted but, by way of compensation, the Southern Railway and later BR was obliged to continue to carry coffins until the facility was withdrawn in 1988.

This diagram shows the route of the line at Brookwood. 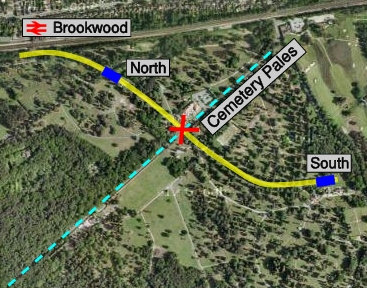 The North station served the non-conformist denominations whist the South terminus was for the Church of England customers. Standing near the "back exit" from the BR station ... 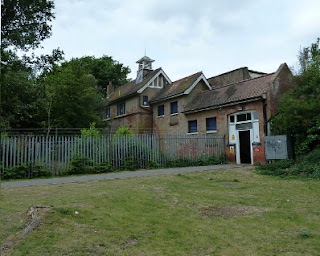 ... you would be likely to be run down by the daily coffin train. The aerial photo (above) shows that, as is often the case, a line of trees marks the former trackbed. Here, where the rails crossed Cemetery Pales ... 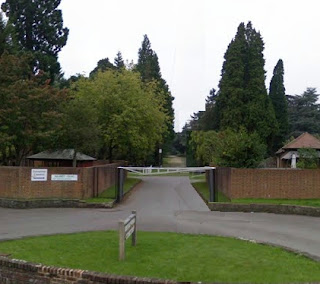 ... the pathway between the conifers marks the line's erstwhile route. The track is more obscured on the other side of the road ... 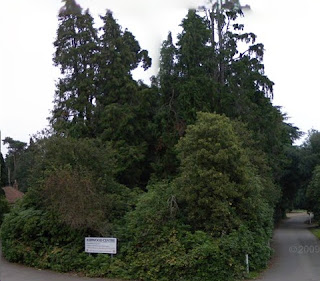 ... being where the white notice is. Both station buildings (here the North station) are long gone, but at the former South terminus ...

... a piece of platform remains topped by a modern building. The nearer edifice is the original CofE chapel, however. 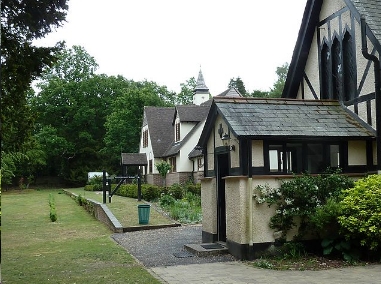 A much more extensive history and description of the railway is available here:- 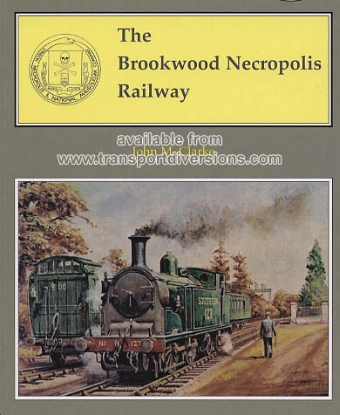 During the night of 16–17 April 1941,bombs repeatedly fell on the Waterloo area, the rolling stock parked in the Necropolis siding was burned, and the railway arch connecting the main line to the Necropolis terminus was badly damaged. Multiple incendiary devices and high explosive bombs struck the central section of the terminus building. While the LNC's office building and the station platforms survived, the central section of the station was reduced to rubble. 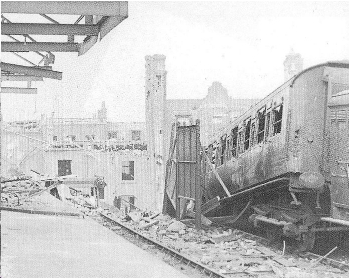 On 11 May 1941 the station was officially declared closed.

In the end the Necropolis (it means City of the dead; "polis" as in "metropolis" and "necro" as in "necrotic tissue") project was pretty much a business disaster. The cemetery has become multi-faith and still trades; but no longer could fbb choose 1st, 2nd or 3rd class funerals complete with rail travel from Waterloo. No longer could his mourners enjoy refreshment in the Cemetery's station buildings where the premises were licensed for the sale of spirits.

Sadly, according to Mrs fbb, it'll be a simple trip into the blazing fiery furnace. As she says, with biblical truth moderated with financial caution, "You don't need to worry, you'll not be there!" How true.

Next Bus Blog : Sunday 23rd September
Posted by fatbusbloke at 02:18