It's all a bit loopy!

Last week, fbb began a review of the new network of bus services due to start on Sunday 23rd in Norwich. Two more chunks, one today and one tomorrow and the last bits and pieces next week. First we have the comany's on-line summary of the change in BLUE; then fbb's comments. 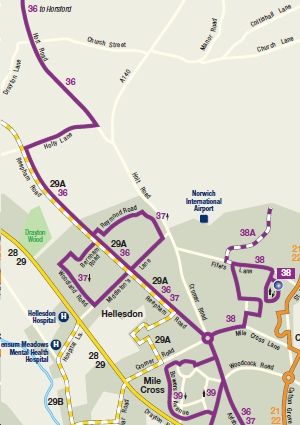 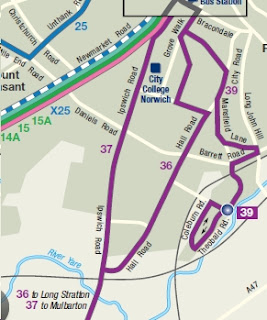 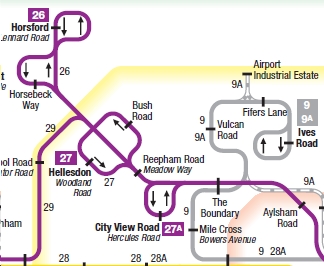 ... with a selection of 9s 10s and 18s running south to Lakenham, Long Stratton and Mulbarton. 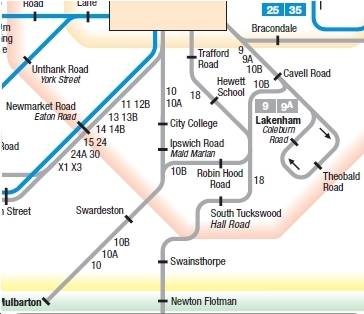 fbb wonders whether the planners of the new network have been too "clever" with complex linkings and failed to create a network simple enough for the Mrs Miggins of this world to understand. Hopefully there will be plenty of roadside assistance in the early stages. 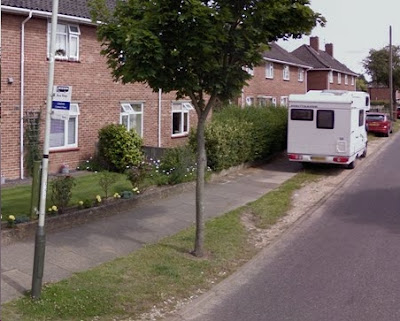 No doubt Lakenham ladies will look lively and
spot that their bus is no longer a 9/9A but a 39.
Another luxury bus stop!


In many ways the actual timetables are easier to understand than the map, although some may think that fbb's version of the new network is better than First's.

37  runs every 30 mins from Hellesdon via Norwich to Mulbarton

38  runs every 30 mins from Norwich to Ives Road

39  runs every 30 mins from Mile Cross via Norwich to Lakenham.

In fact the 39 impinges so little on the main  Purple  corridor that it barely warrants inclusion in that particular "colour". Likewise the 38 does not offer much that is extra for the proposed purple passenger. fbb would have just painted the 36 and the 37 in pretty purple and left the 38 and 39 as a nondescript grey. A passenger for "greater" Hellesdon would be a bit miffed if he caught a 38 or 39!


The big problem with the ends of the 36 and 37 is that they are loopy. Bus companies and journey planners seem to become particularly unthinking when they advertise loops. Here is the Horsford version, service 36. 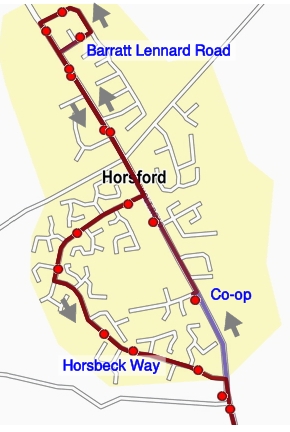 And here is First's timetable for departures from Horford southbound:- Several morning journeys are headed CO; which tells us that these buses start from Holt Road Co-op in Horsford. That's nice and helpful but every bus starts from the Co-op, at the start of the one way terminal loop. Here is an extract from fbb's version ... 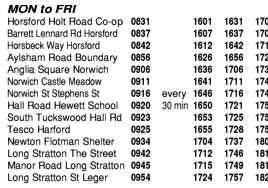 ... where old chubbo has added a (hopefully correct) Holt Road time to the start of First's timetable presentation, thus showing the whole loop. Because First and Traveline can't do loops, a frail and arthritic pensioner (wonder who?) is told to walk for 7 minutes rather than catch the bus from the co-op. 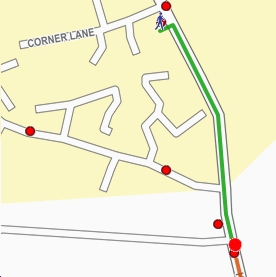 It may be quicker to walk, but "on a misty moisty morning when sharply slats the sleet", even the sprightly fbb (that's a joke!) would prefer to sit on one of First's finest. 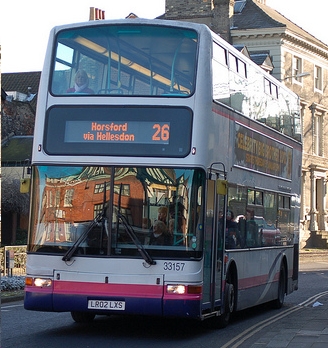 The same loopy problem exists at the other end of the route where Long Stratton is equally ill-explained ... 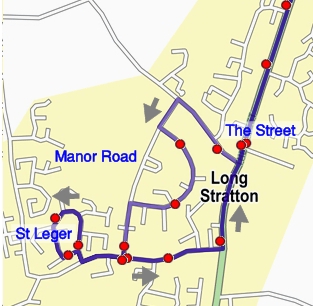 ... and just as unhelpful to the new or confused passenger.

Even worse, but before these changes, the problem was particularly profuse at the southern end of the 10 group. Here, according to the sainted Traveline,  buses from Norwich served the "old" village at the Worlds End pub ... 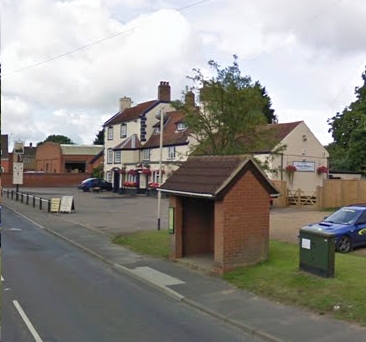 ...  passing close to what was once most of the village clustered round the church. 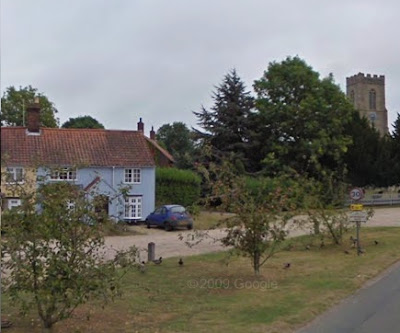 The bus then whizzed down the stopless B1113 to its terminus here ... 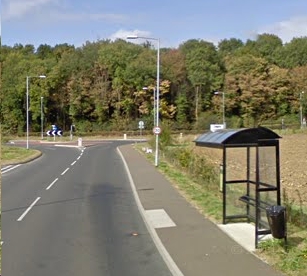 ... in the middle of nowhere; where it sat for several uninspiring minutes before setting off to places where you might want to go, namely the estates of "new" Mulbarton. 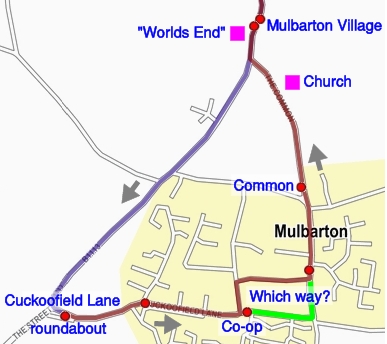 Tragically, if you wanted to go from (e.g.) Mulbarton Common to the Co-op ... 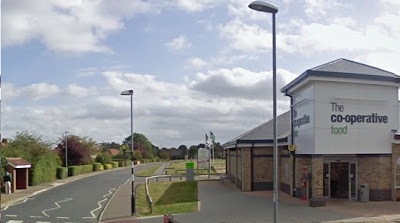 ... you couldn't because the loop was one way and the wrong way. Such is the problem with loops! The service 10 map implies that the buses turned left off Cuckoofield Lane and missed the co-op stop completely. Or did they use fbb's green line? Who knows?

Fortunately, and according to the First "purple" leaflet, the new 37 runs out and back the same way; i.e. via the new estates in both directions. 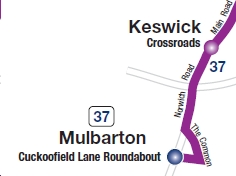 No loopiness, much happiness. 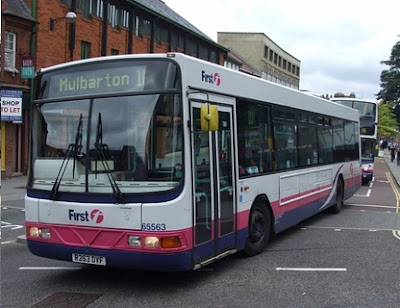 Next Bus Blog : Friday 21st September
Posted by fatbusbloke at 05:57