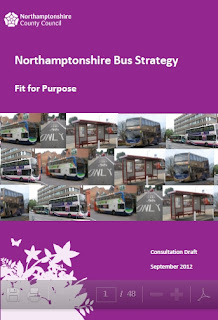 The d(r)aft bus strategy says:- "While most commercial bus operators produce leaflets and maintain websites to advertise their services, the County Council is involved in ensuring that comprehensive information is available to passengers for all operator's services."
The comperhensive information availability was pictured on Wednesday by our local correspondent. First operates 8 routes in the town, so this was the "comprehensive information" available outside the company's permanantly closed enquiry hut at the bus station. 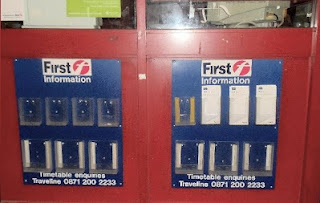 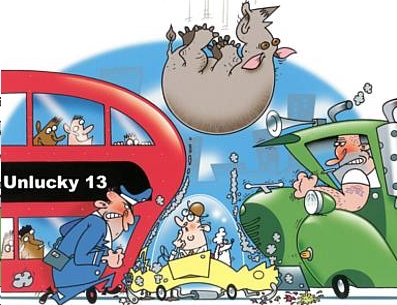 Nearly a third of AA members will think twice about buying new cars with the 13 number plate that comes into effect in March; not because they dread a mishap, but because they fear trying to sell them on, AA Populus research reveals. 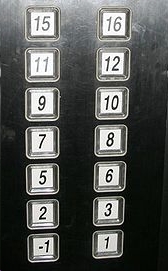 Reasons for omitting a thirteenth floor include triskaidekaphobia** on the part of the building's owner or builder, or a desire by the building owner or landlord to prevent problems that may arise with superstitious tenants, occupants, or customers. 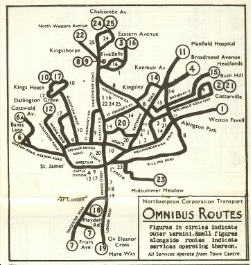 Northampton Corporation Transport eschewed  the dreaded 13 route number for many many years, jumping from 12 (Dallington Green) to 14 (Kenmuir Avenue). The 14 circular was eventually "split" and one half became the 13 to Links View.

In Norwich, the 13 survives in the re-organisation from Sunday 23rd.

TURQUOISE  services 13, 13A, 13B and 13C will operate between Spixworth, Norwich, Wymondham and Attleborough. The new Turquoise services have been extended through Norwich City to Spixworth, and a new Sunday hourly service has been introduced to Spixworth.

fbb comment  The former service 10 to Spixworth becomes the cross-city to Attleborough but, on the surface, with a more complicated set of route numbers ... 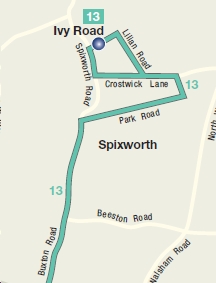 ... which appear as an unadorned service 13 Norwich network map. The Spixworth terminus was not the most attractive place to wait when the Streetview noddy car last visited. 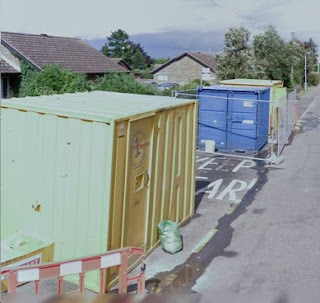 During the day there is a simple 30  minute service; simple that is, until you get to Attlebrough where there is another dreaded loop. See yesterday's blog (read again). But, unlike previous example, First have shown the loop in full on outward ...

... and inward panels of the timetable.

The map shows the loop as well. But, unhelpfully, has inconsistent naming meaning that matching timetable and map could be tricky. 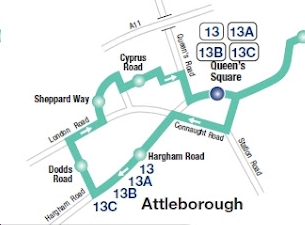 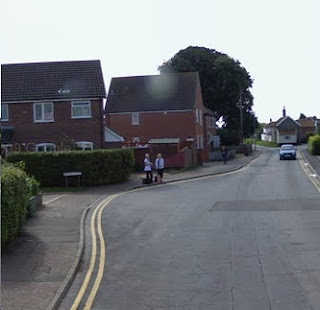 ... called Hargham Road on the map, but Shrub Close in the timetable. Note the obvious bus top sign and the shelter for use when the Norfolk weather is less than clement!  A better name would be "Sainsburys" whose store is very obviously opposite Hargham Road on the High Street. Although not particularly convenient, this stop is probably the best for the town centre unless you want to do a full circuit of the loop and get off at Queens Square ... 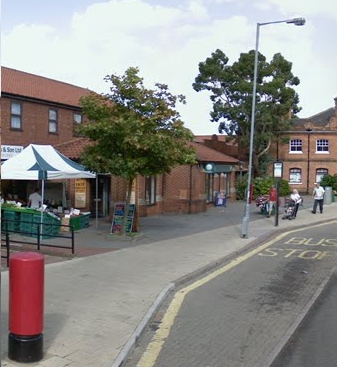 ... where you are nearer the traditional shopping area. What makes the 13 one of the least satisfacory of the new "easy-peasy" coloured network is the plethora of varieties of 13 that are on offer. 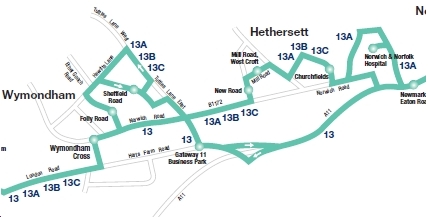 Sunday  buses are all 13B, as are a few weekday journeys. These run via Hethersett and a back way into Wymondham; roads normally served by 14s which do not operate on Sundays.

Evenings  (including Sunday evenings) we have 13As which run via the Hospital as per 11/11A, continuing via Hethersett as the 13B. Presumably this diversion is to provide a link from Attlebrough, Wymondham and Hethersett for evening hospital visiting and/or late shifts (?). Unless it is for the big rave-up in Colney Church Hall! 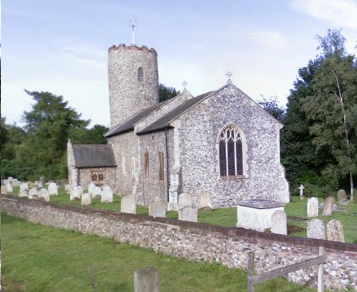 13C  is used for a couple of trips that divert via Wymondham College.

With the helpful map in the timetable leaflet, these variants can be sorted out; but the poor folk on the Spixworth side of the City will need to remember 13As, 13Bs and 13Cs are no different from 13s; at least as far as the centre of Norwich.

** triskaidekaphobia : a fear of number 13 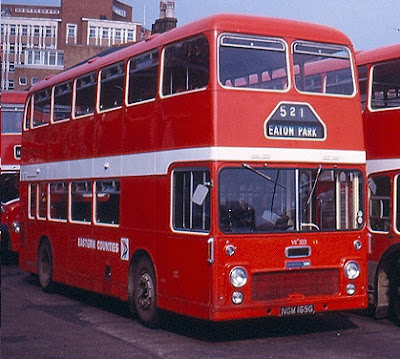 Not totally relevant to service 13 - but a happy memory!
.