A Ripping Yarn at Ripon 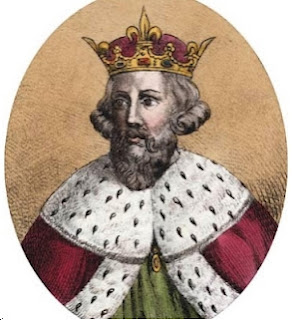 In 886, Alfred the Great, 37 year-old warrior king, was travelling his kingdom to defeat the Vikings, and to drum up support . Arriving at the small settlement of Ripon, he liked what he saw and granted a Royal Charter. He lacked the wherewithal to produce an appropriate document, and so gave a horn which is still safely locked in the town hall. 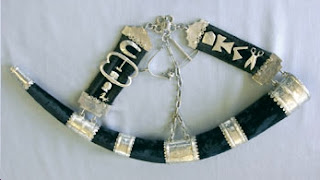 ‘You need to be more vigilant, there are Vikings about’. Alfred warned. So the people appointed a Wakeman to guard the settlement through hours of darkness, and he put that horn to use by sounding it at the 4 corners of the Market Cross to announce that all was well as he began his watch. The town’s now on its 4th horn. 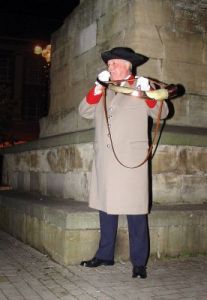 And every night that's exactly what happens. Yes. every night, come wind, rain or snow, at 9pm precisely the simple ceremony is performed as it has been pretty well continuously for over 1000 years. The Wakeman is the supposed to repeat the process outside the Town Clerk's house to confirm "job done." Either town clerks are issued with earplugs or this bit of the ceremony has lapsed!
Once upon a time the City provided the Wakeman with a house. That perk has long since gone, but the premises were once a museum and now a pleasant cafe serving local delicacies and a good Yorkshire brew. 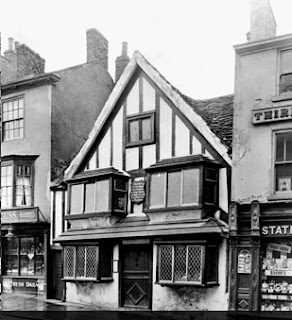 Except it almost certainly wasn't the Wakeman's house. But why let historical accuracy get in the way of a good yarn? The whole Horn and King Alf might be a porky pie as well; but the tradition is none-the-less almost unbelievably ancient.

And just round the corner is the significantly underwhelming Ripon Bus Station, this version built in the year 2000. [Is it called the Millennium Bus Station?] 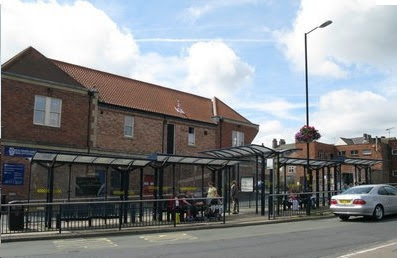 And it is from here that you can catch a bus all the way to Leeds via Harrogate. And here's a 36 that's just arrived in 1982. 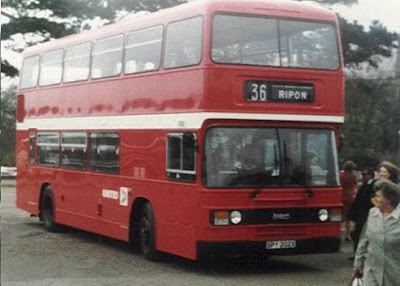 Ripon was  just about the southernmost depot of the United Automobile Services company pre-deregulation, although United has its origins in East Anglia and its buses (and those of its subsidiaries) covered Eastern England from Norfolk to the Scottish Border. For privatisation the huge Northeastern business was split up, but a depot in Ripon remained.
Here is a privatised United bus waiting for its turn of service st Harrogate. 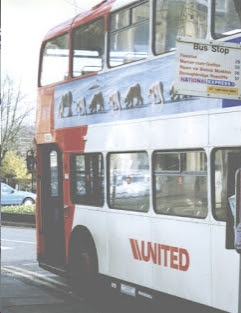 For years and years the route was joint with West Yorkshire Road Car Ltd which, again post-privatisation, begat Harrogate and District [H&D]. So here is a 1988 timetable for the joint service ... 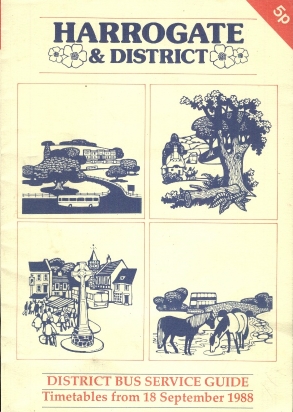 ... in H&D's rather distinguished timetable book. Historically, the schedule was half hourly between Harrogate and Leeds and hourly between Ripon and Harrogate. But the 1988 book shows a different pattern of service. 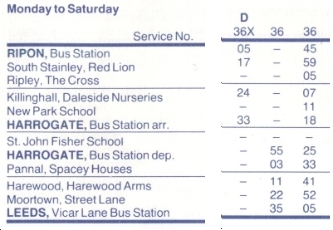 The 36X was in response to a typical post deregulation attack by a company called Harrogate Independent Travel, branded as Challenger ... 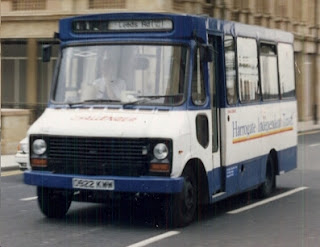 ... which started an hourly run to Ripon. The 36X just nipped in front of the Challenger challenger and soon the intruding company sold out to the incumbent.
Nevertheless H&D were able to persuade their United "partner" that a half hourly service over the full route from Ripon to Leeds was a long-term "goer" and this is reflected in the 1993 timetable ... 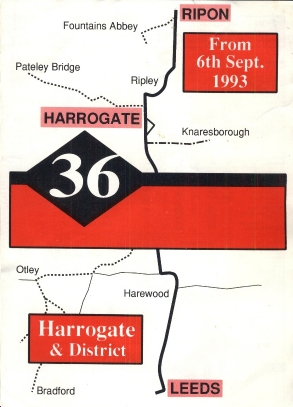 ... shown in a leaflet actually produced by the fat bus bloke! 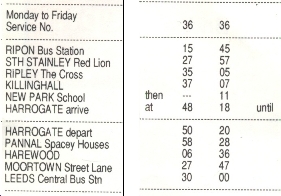 The leaflet reflected the route branding shown to dramatic effect on the vehicles. 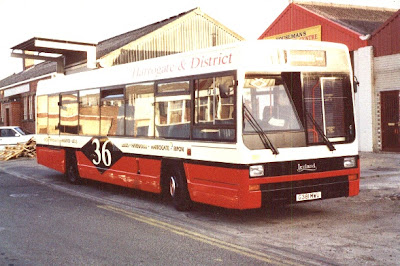 Expansion was the order of the day and, thanks to good marketing, additional peak journeys and cheaper fares than the slow train service, business started to grow. In the late 1990s H&D bought the Ripon Depot and its routes from United, thus gaining total control over the service 36.
Tomorrow we bring this heartening tale up-to-date.
------------------------------------------------------------------
Much to the abject horror of their Island friends, fbb and Mrs fbb are off early today (0615) on a day return (mainly by train) to Harrogate. Most Islanders regard the bus ride into Newport as a big and terrifying adventure and reaction from various friends has been "What! In a day?" combined with a sad shaking of the head.
The purpose of this visit is for the fbbs to pay their respects to Archie Robin Fearnley, aged one month, as below. 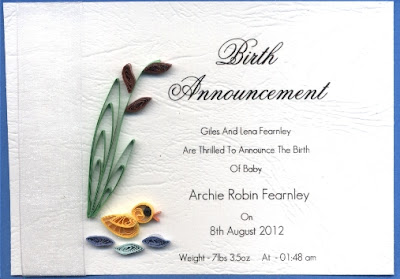