From Sunday 23rd September the whole of the First Bus network in Norwich gets a make-over. The changes are less dramatic than in First's first Fearnley-inspired reorganisation in Southampton, but nevertheless much will alter. The aim of the new "cunning plan" appears to be to make better use of resources by combining most services into Cross City routes.

Colour branding (a sort of new-look "Overground"?) is designed to make the network easier to understand; but fbb found First's new map a bit on the baffling side; so much so that he spent a happy hour or two modifying the official on-line version to show route details a little more clearly. Well, that's the idea. For those that are incredibly keen to follow the whole thing, three maps are available to download and / or print out.
First's "old" network diagram (here)
First's "new" network map  (here)
fbb's "new" network modified version (here)
For each colour group, First's press release details are shown in BLUE and fbb then adds his comments.
RED  services 23, 23A, 23B, 24 and 24A will operate between Heartsease OR Thorpe St Andrew ... 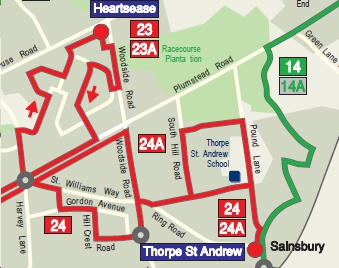 ... then Norwich, then Costessey OR New Costessey, then Lodge Farm OR Queens Hills. 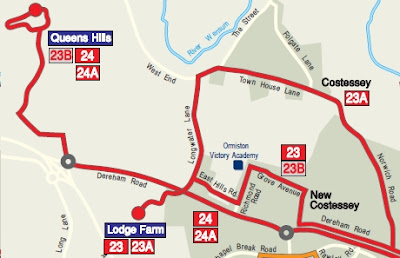 There will now be a bus every 7/8 minutes between the Heartsease Pub and Dereham Road. 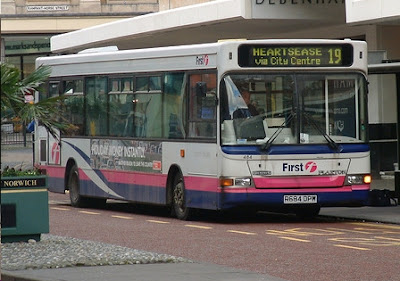 fbb comment   This integrates existing Plumstead Road journeys numbered 19, 19A and 20 to Heartsease with 24 and 24A to Thorpe St Andrew on the east side of the city ... 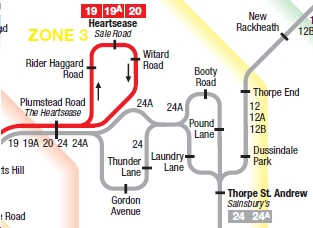 The route numbers remain complicated; but slightly less so with the new linking. 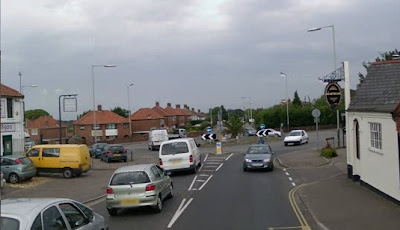 The timetable is simpler on Monday to Saturday daytimes than it might at first appear. Buses run every 15 minutes from Heartsease to Lodge Farm (23 and 23A) and, likewise, every 15 minutes from Thorpe St Andrew to Queens Hills (24 and 24A). The 24 and 24A routes do not run in the evening or on Sundays when a 23B hourly variant from Heartsease provides a service to Queens Hills. The whole package looks reasonable, except for the good folk of "greater" Thorpe St Andrew who might have hoped to gain some Sunday and evening buses. 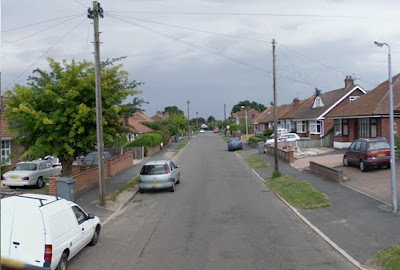 Mind you, there are plenty of cars on Hillcrest Road (Svc 24)!

In any majot re-jig, there are bound to be losers; complaints are already being voiced locally because the previous 24 and 24A routes ran through to the main Hospital site. From 23rd, Hospital visitors will need to change buses in the City centre.
YELLOW  services 28 and 29 will operate between Thorpe Marriott OR Taverham ... 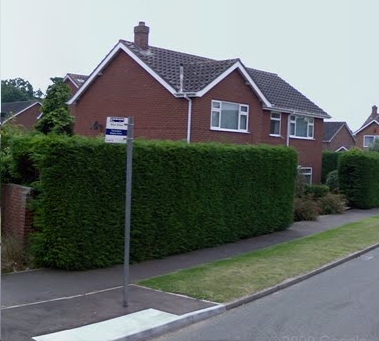 Taverham's Trendy Terminus!
... then Drayton and Norwich. More direct journeys have been introduced at peak times between Taverham and Norwich and off-peak passengers can either travel via Hercules Road (29A) or Hellesdon Mill Corner (29B). 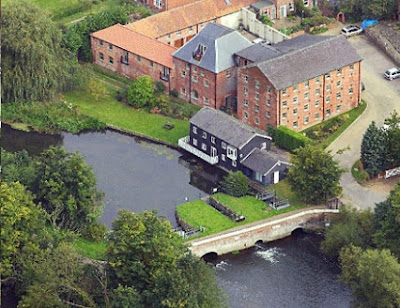 Hellesdon Mill : Mill then Brewery and now Flats
fbb comment   As the man says, the new 29 provides direct journeys to Taverham at peak, previously served via Reepham  Road and route 29. The Hellesdon Mill "loop" is also part of the off-peak service. The previous 28A service ...

... has been improved marginally but some might argue that Taverham itself is worse off with a more complicated set of route options. 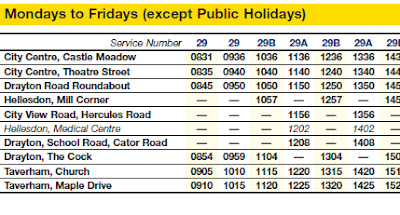 Compare this with the simple but indirect hourly 29 in the current timetable. 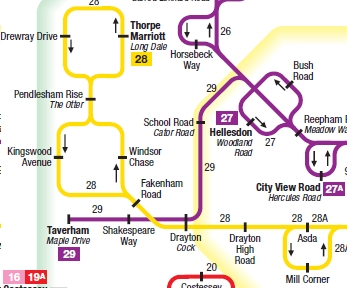 Showing the "old" 29 and "Mill Corner" 28A variant
significantly changed in the new network.
The new 28 is unchanged from the old, and follows a significant "wiggle" around Thorpe Marriott. The old diagram is very "broad brush" whereas the "new" more accurate map is much more helpful to the potential passenger. This is from fbb's modified version. 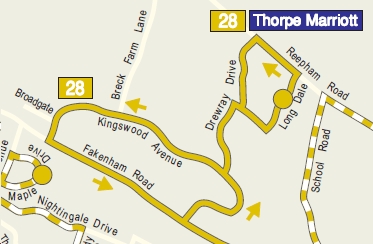 Maybe diagrammatic maps are not such a good idea!


fbb's survey of the New Norwich Network continues tomorrow. In the meantime a pic of a real bus going to Costessey in "the good old days". 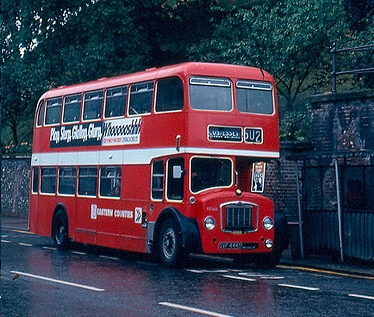 
Next Bus Blog : Thursday 13th September
Posted by fatbusbloke at 06:45