To Travel Hopefully : No More PLEASE

In addition to on-line mis-information, ATOC also provide station posters. fbb has referred to these but was unaware that they could be found on-line until a kindly blog ready guided the aged information seeker as follows:- On the National Rail enquiries site go to ...

... but instead of ticking on any of the options just scroll down and you will find this ...

... which, when clicked, reveals a copy of the station poster. The file is, to use a technical term, BIG. But if you wish to see the whole thing a copy is available (here).

An innocent blog reader might expect the information to be either the same as the on-line stuff or, at the very least, a useful subset thereof. But ATOC wouldn't be as consistent as that, would they? Of course not! The poster information is different, very different.

In some ways it is better (shock, horror rushes to get the bottle of smelling salts). It does label the station stops correctly. 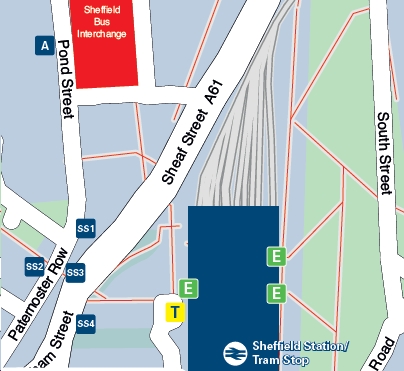 there they are, SS1 to SS4. The poster also admits to a tram stop but doesn't tell you where it is, merely linking it with the Station. That's not too disastrous as there are signs directing you from platform to stop. Whilst enjoying this exciting graphic, please note that ATOC has created two exits on the east of the station, (coded  E ). WRONG, there's only one.  T   is taxi, not tram (sadly).

Note also that the cartographer has permitted his two year old daughter to scribble meaningless and unexplained red lines all over the maps; he should keep the child under control.

Then there's another map ... 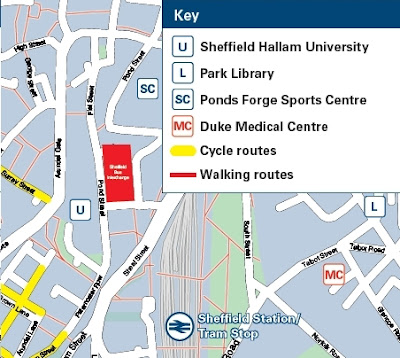 Presumably Sheffield Cyclists are used to riding up dead ends and being banned from most city centre roads? What on earth does "cycle routes" mean and who is it for? Then, after a particularly stressful train journey, you can make you way (a long way) to near stop "E" (read again) and pop into the Duke Medical Centre. And while you are waiting for your delayed train, why not take a slightly longer journey to the Park Library? Incidentally, the city's main central library lies unmarked on the Surrey Street "cycle route", middle left. 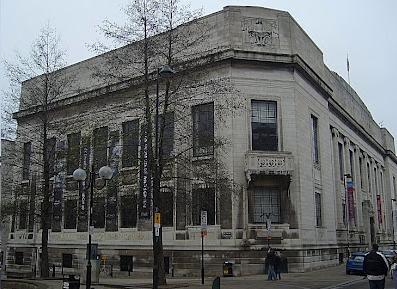 Probably has a few more books than the Park Branch; the reference library has some very comfy seats.

So far, so good bad.

Now for the bus information. Positive first, ATOC does admit to the tram on this poster but not on-line. But here are a few snippets from the list of "useful" and "frequent" bus services:-

Here we go again. There is no 72, services 69 and X78 do not serve Burngreave and the 272 from Castleton terminates at the bus station interchange and has never been to Burngreave.

Service 265 has never served Grimesthorpe, ever.

There's no 284 and, as before, the 5 minute frequency to Ecclesall and Bents Green is ignored because it leaves from the city centre.

It is about a useless as the proverbial chocolate teapot. But, "hold fast," we hear you cry, "you can txt for bus times." Oh yes? Let's try, it might be fun ...

And three times comes back the helpful message ...

... but we must persevere. (Why?) After a pause to make a nice cup of tea and read a few chapters of "War and Peace", fbb tries again and ...

... is told that the quoted codes are meaningless.

One of the commentators to fbb's blog reports that ATOC only has "a budget" to update these posters once a year. fbb has not verified this observation, but, if true it's particularly potty. If this information cannot be delivered accurately and helpfully it should not be delivered at all. In its present form it is doing real harm to the concept of an "onward journey" by bus.

These blogs have been forwarded to ATOC, but as yet no response has filtered through to the fat bus bloke.

Conclusion
It is a real and useless mess. It needs sorting out OR removing from the ATOC site. And, please, pretty please, do not attempt to import data from Traveline without a massive effort at revising and editing its terrible stop definition system. NEVER use NaPTAN!

Tomorrow. Is more less and is the 19 Rediculous?