The Beauty of Bridgnorth 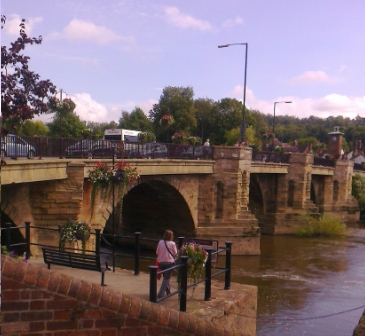 Mrs fbb enjoys a view of the river and
Thomas Telford's bridge
Bridgnorth is named after a bridge over the River Severn, that was built further north than an earlier bridge at Quatford. The bridge was rebuilt by Thomas Telford in 1823 and still stands today linking roads and steep paths ... 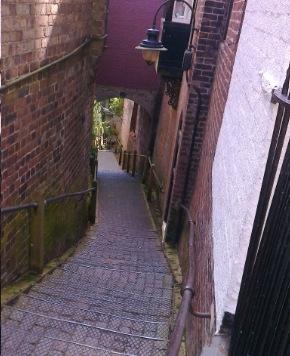 In 2005, unverified German papers dating from 1941 were found, outlining new details about Operation Sea Lion, the military plans of Nazi Germany for an invasion of Britain. Two quiet Shropshire towns were mentioned in the documentation; Ludlow and Bridgnorth. Some experts believe that it was Hitler's intention to make Bridgnorth the German headquarters in Britain, due to its central position in the UK, rural location, rail connections and now-disused airfield.

But thankfully we are not looking around Nordbrücke! 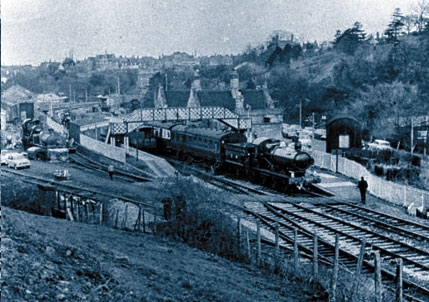 ... has its northern terminus in the town but our visit is to something even more interesting (?)
.
Pausing to glance at the non-standard road signs still extant at the north end of the bridge (and elsewhere in the town centre) ... 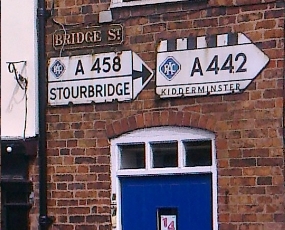 ... we then espy this delight. 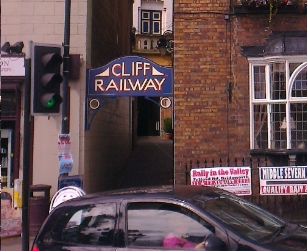 The railway opened on 7th July 1892. The original on-car drivers were eventually dispensed with, in favour of a hand operated brake controlled from the top station. The on-car brakes were made to operate only in the event of a rope failure. In 1943, the pump system was reaching the end of its working life, and this prompted a major rebuild of the railway.

The basic idea of "funicular" operation is that two cars are always attached to each other by a cable, which runs through a pulley at the top of the slope. Counterbalancing of the two cars, with one going up and one going down, minimizes the energy needed to lift the car going up. The Bridgnorth system was built using water tanks under the floor of each car which were filled or emptied until just sufficient imbalance is achieved to allow movement. The movement is then controlled by a brakeman.

The hydraulic system of counterbalanced cars was replaced with an electrically operated mining type motor of 32 hp. The original emergency brake was retained, hence in the event of a rope break the car would grip the rails until they came to a halt. The speed of the cars was regulated by air brakes acting on the haulage drums, and proximity devices which would act to slow the cars as they approached the end of the track. In addition, further safety improvements included interlocked loading doors at top and bottom, and a "dead man's pedal" speed controller. 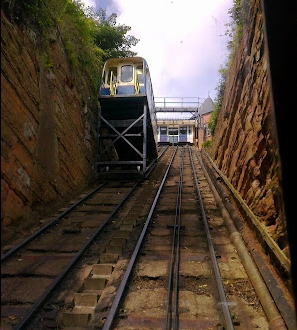 fbb and Mrs fbb enjoyed their return ride for £1.10 each (no singles available) and then, thus intellectually stimulated, repaired to the associated tea rooms where, much to Mrs fbb's surprise (!) there was view of the engines ... 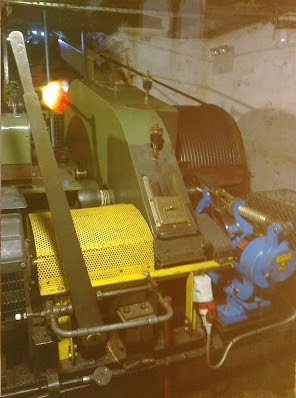 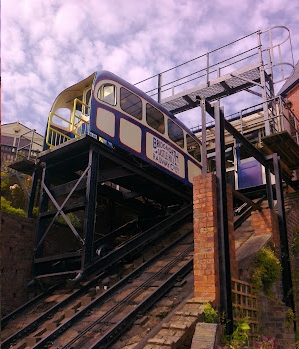 ... with an equally stimulating aspect. Keen observers will note that the car body is attached to its frame with four leaf springs, thus ensuring that the ride is the essence of comfort. 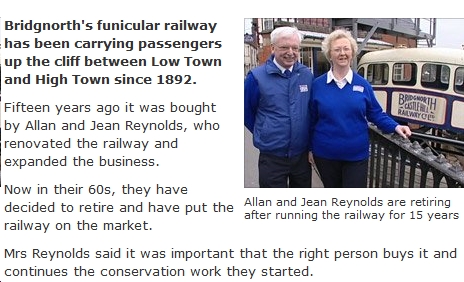 The previous owners retired in 2011 and the company is now owned (perhaps sadly) by a Suffolk-based firm of property developers. Its claim to be the only inland "funicular" now remaining in the UK might well be challenged by the Centre for Alternative technology near Machynlleth ... 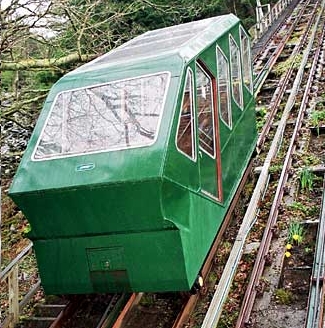 ... and Llechwed Slate mines near Blaenau ffestiniog where the cars run mostly underground. 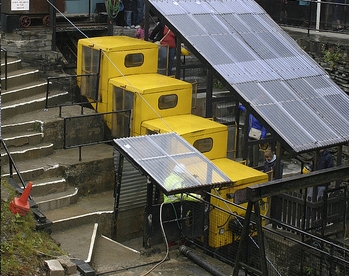 Whatever its transport claims to fame, Bridgnorth is a very pleasant market town and fbb recommends a visit; and not just to experience the Castle Hill Railway, despite its being a good ride!

The travelling twosome are currently staying at Abergynolwyn, in the foothills of Cadair Idris and a few miles inland from Tywyn. So tomorrow we explore the delights of public transport in the village (?).
.