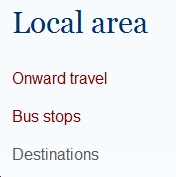 We are exploring the "onward travel" information, well hidden on the National Rail web site. Yesterday we have examined the map (read again) and found just a modicum of uselessness. Now we move on to the page headed "Bus Stops" where, silly silly you, you would expect to find some guide as to the "Bus Stops" adjacent to the Sheffield Station. There's a clue in the words!
But to find such a map or diagram of "Bus Stops", you need to click on "Destinations", obviously. 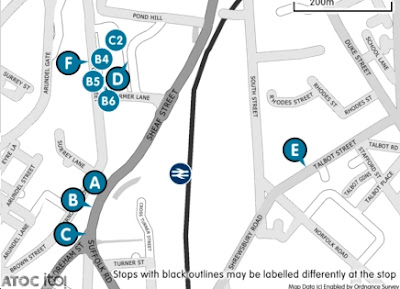 The enigmatic note on the map "stops with black outlines may be labelled differently at the stop" does not immediately inspire confidence. So let's take a look at A, B and C which are shown on the western side of the Sheaf Street, Suffolk Road and Shoreham Street junction.

C
There is no stop "C" as shown on the ATOC map. 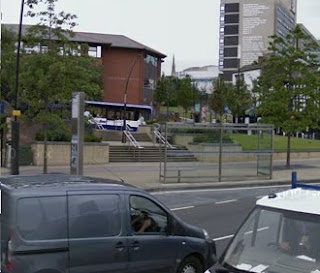 ... roughly where it is shown on the map and is, mainly but not exclusively, an alighting stop for buses terminating at the bus station. It is on the west side of Sheaf Street. Service 53 to Owlerton and Parson Cross stops there. It should not be confused with stops B4, B5 and B6 with are IN the bus station. Likewise stops C2 and (oddly) D are in the bus station. 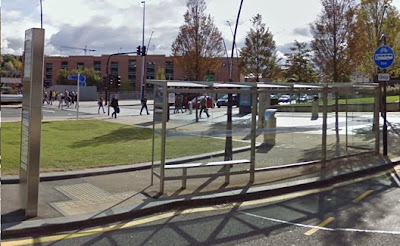 ... and it serves 14 routes and makes for a very useful interchange. Because Paternoster Row and most of Pond Street are now "buses only" it is quite difficult to find an on-line map to guide the unwary visitor; fbb's effort is below. The pedestrian crossing behind the shelter leads to the station. The map does not make its location clear, thus it appears to be one of three on the west side of Sheaf Street. To add to the befuddlement the road name "Paternoster Row" is obscured by the bus stop letters. 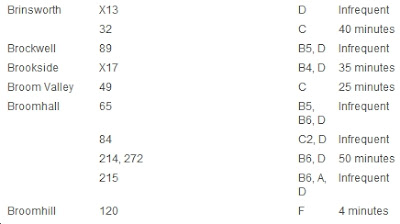 So fbb is mystified that only a few services admit to stopping there according to ATOC. Just to add to the proliferating confusion, however, lots of services appear to stop TWICE in the bus station, namely at B4, B5 or B6 and then again at stop  D . See if you can make sense of that bit of nonsense from this bus station plan: 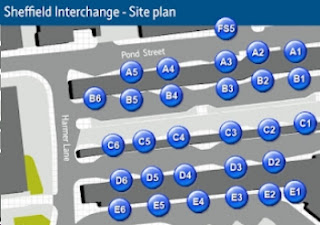 In fact they stop only ONCE in the bus station (obvious except to ATOC), then most of them call at stop A; ideal for transfer from a train.

?
But look again at the picture of stop "B". Behind and beyond the shelter is a bus, in fact the city centre "FreeBee" service which links many useful central stops and destinations. It has stopped on the west side of Paternoster Row, a stop completely ignored by the ATOC map. This is TSY's SS2. Several other useful services call there! 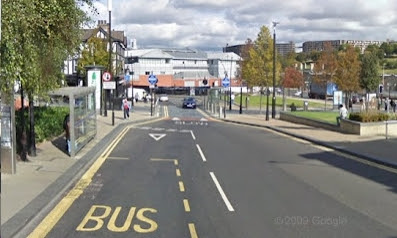 ?
The other stop missing from the map is TSY's SS4 used by a big group of services travelling south east from the city and, again  completely ignored by the ATOC map. 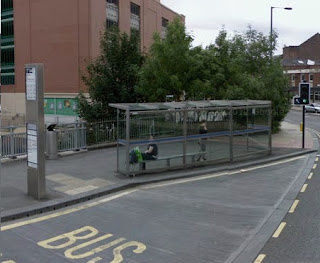 It is on the east side of Sheaf Street and opposite where stop C would be if there were one. All is made clear (sort of) on the fbb map below.

F
Stop F on ATOC's map is stop FS5 on the bus station plan above. The guide says services 47, 48, 79 and 120 stop there, which indeed they do. But about 200 yards further north is their "city terminus" where they wait for "time"; so a sensible potential passenger would walk on a little and, quite likely, find their bus chuntering peacefully at the slightly more distant stop.
E
Finally, tada, we come to stop E; and we always leave the best till last. Let fbb guide you to stop E.
Leave the station as if to go to the tram stop. Tram? No such thing according to the ATOC map. 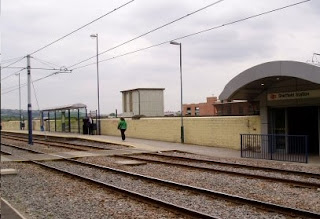 Turn right and walk along the footway to the first road junction ... 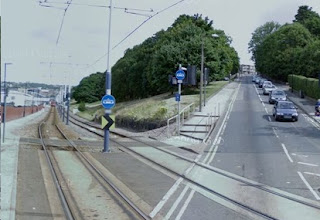 ... and turn very sharp left up Shrewsbury Road. This view is looking back towards the station on the left. As you turn left, just gaze to your right and you will see a bus stop. 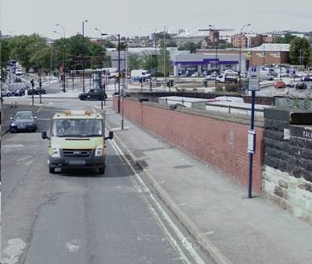 But ATOC doesn't want you to wait there, oh no! Heave your body (and your luggage) UP the steep-ish Shrewsbury Road. Walk past this stop on the hill; why wait there when you can walk even further? 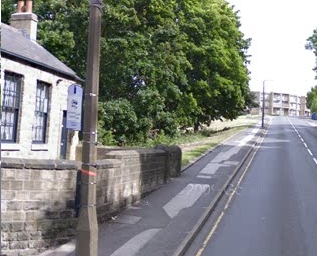 And continue to Talbot Street, just past those flats at the top of the hill. 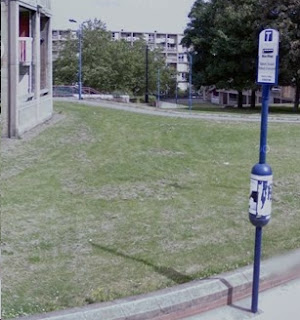 And there is lovely, well appointed, stop E. The text tells you that you can catch bus 120 from there; indeed for most of the "destination" entries this is the ONLY stop "near" the station where you can catch the 120.

Alternatively, and ignoring ATOC's map, you could use stop SS4 right outside the station. It's a bit quicker(!)  and it's flat; but the ever-helpful ATOC would just love to see you walk an extra distance and up a steep hill and ignore two other stops on the way. Of course the problem is that ATOC doesn't know stop SS4 exists. Potty and pointless!
So the bus stop information, hidden in "Destinations", is complete garbage, and that is putting it mildly. Here is fbb's version of all the stops in the centre ... 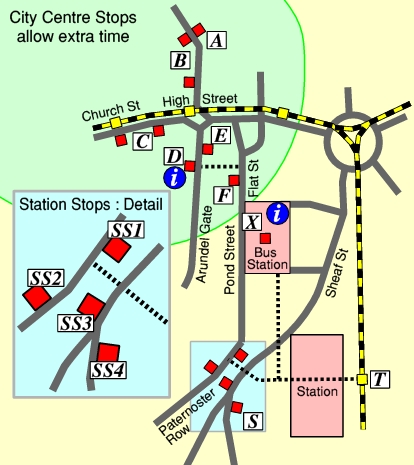 ... an excellent basis for a USEFUL list of Sheffield departures which the chubby one will discuss later in this series..
So, in exasperation, we need to see where ATOC thinks that the buses go.

Conclusion Number 3
Clearly whoever (or whatever) compiled the ATOC "station" map has never been to Sheffield. The mistakes are so obvious as to lead an informed observer to question the sanity of those who created it; and the incompetence of ATOC for allowing it to be published. The consequences for an inexperienced passenger are potentially horrific.
.
Wot, no bus pictures? 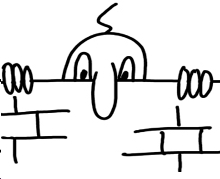 So we'd better have one. This shows a Doncaster bus operated by the LMS Railway leaving from outside Sheffield's LMS (Midland) Railway station in the 1930s. 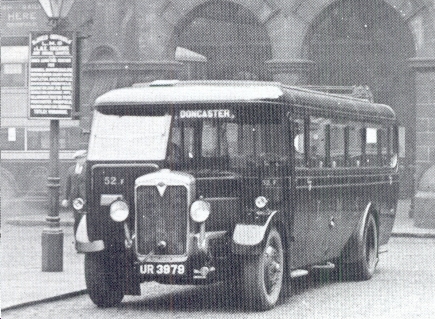 Buses leaving from right outside a railway station? An intriguing idea; maybe someone should try it today?


Next Blog : Thursday 9th August
Posted by fatbusbloke at 02:57