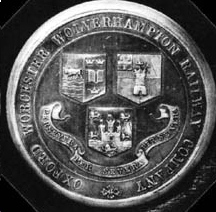 The Oxford, Worcester and Wolverhampton railway was a company authorised on 4 August 1845 to construct a railway line from the Oxford and Rugby Railway at Wolvercot Junction to Worcester, Stourbridge, Dudley, and Wolverhampton. The line was opened in stages between 1852 and 1853, and had connections to the Great Western Railway (GWR) at both ends. In 1860 the OWW amalgamated with the Newport, Abergavenny and Hereford Railway and the Worcester and Hereford Railway to become the West Midland Railway, which in turn was amalgamated into the GWR in 1863. 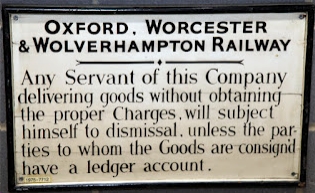 So Stourbridge Station opened with the line in 1852 but on a site a little way north of the present junction platforms. Seven years later a freight branch was built to serve the canal basin, seen here in a modern aerial view. 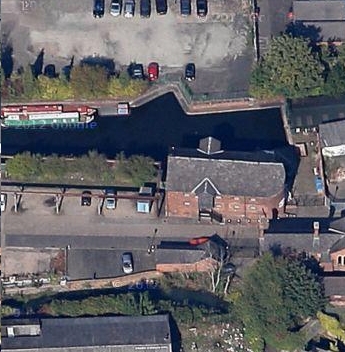 The line veered westwards about 400 yards north of the 1852 station. This little spur closed in 1880 but it is just possible to see a curve of trees where the tracks once ran. 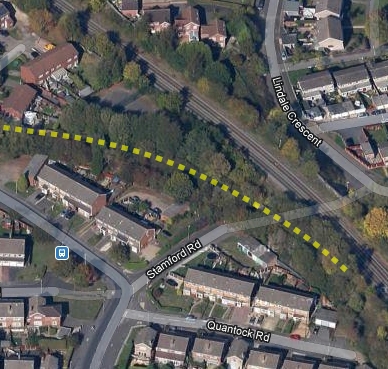 The bridge that linked the two halves of Stamford Road is now closed to vehicles, but this Google Streetview shot shows it to be much wider than the double track route that crosses above. The extra width carried the 1859 to 1880 spur! 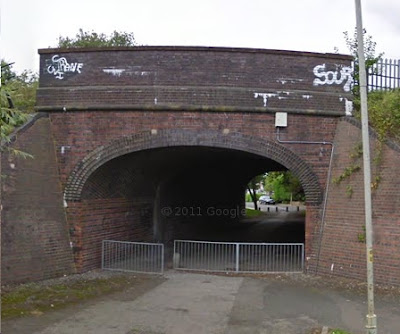 In 1863 the present "main line" from Birmingham via Old Hill joined from the east and in 1879, in response to protests that the station was too far from the town centre, a branch line was built to Stourbridge Town; the former station becoming Stourbridge Junction. This junction faced southwards and, once again, the sharp curve can just about be picked out from a line of trees. 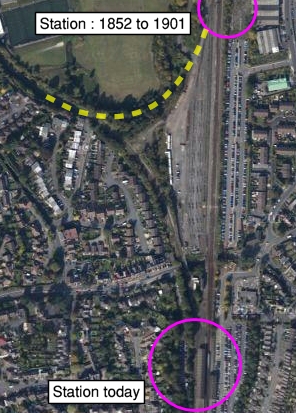 Then in 1901 the present Junction station was built with a north facing line which remains in place today.
The 1879 Town station was a surprisingly grand affair on a double track branch. Beyond the station this "new" line continued to the canal basin (hence the closure of the first spur in 1880) . 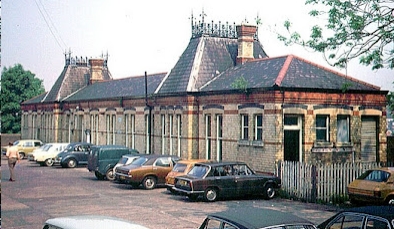 From 1935, however, the line was worked as two single tracks, one for passengers and one for freight from the canal basin. This crossed Foster Street East and Birmingham Road on over bridges, then curved round to the basin. The route can, once again, be seen on an aerial view, but where there was once railway track is now Mill Race Lane and an industrial estate. 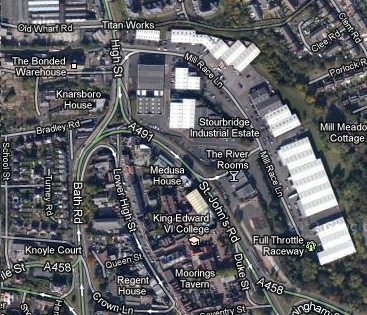 The bridge over Foster Street East was completely renewed in 1957 in preparation for the closure of the freight "extension" in 1965 (!) and it was demolished two years later. Despite widening and rebuilding, the bridge abutment on the south side of Birmingham Street is still in place 46 years after the canal spur was closed. 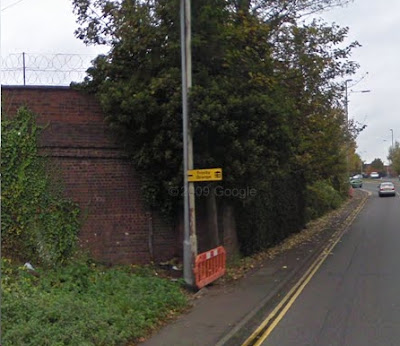 The original Town station was demolished in 1979 to make way for the "new" bus station; by which time the line was run as a shuttle with a single diesel car. 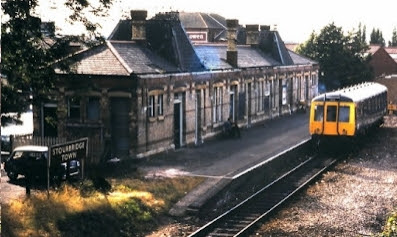 The "new" post-demolition station was unstaffed and nothing much more than a shelter and a hut ... 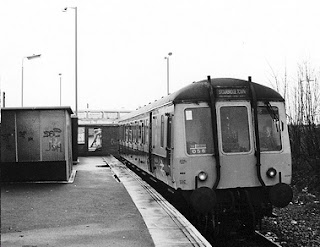 ... reflecting the view that the little line could not last for long. But, despite several proposals for complete closure, the influence and support of the West Midlands PTE (later Centro) led to the present staffed building being added in 1994 ... 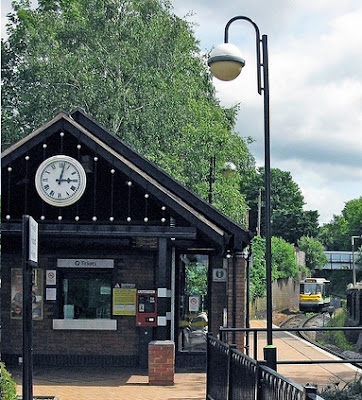 ... which, with the building of the new bus station, brings us up to date.

One of the characteristics of the line was that it was a very steep gradient down to its terminus and this led to several embarrassing runaway accidents in the line's history. Here in 1977 ... 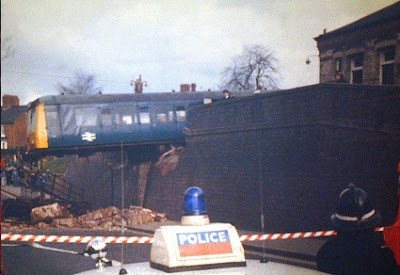 But there was yet one more change in the fortunes of the Stourbridge Town branch. The shuttle service was withdrawn!

We complete the story in tomorrow's blog.
Next Blog : Friday 31st August
Posted by fatbusbloke at 04:17