But Maybe Not Surprised!

Stevenage was a small and unassuming community on the A1 Great North Road. Much of it is still there but hard to recognise because of the trees! 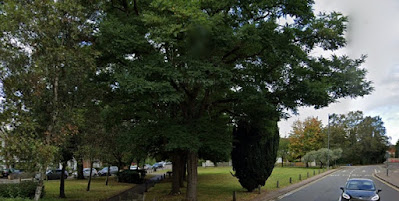 Honest! It is (roughly) the same view!

But all that was set to change. The original settlement is now called "Old" Stevenage.

On 1 August 1946, Stevenage was designated the first New Town under the New Towns Act.

The plan was not popular and local people protested at a meeting held in the town hall before Lewis Silkin, minister in the Labour Government of Clement Attlee. As Lewis Silkin arrived at the railway station for this meeting, some local people had changed the signs 'Stevenage' to 'Silkingrad'. Silkin was obstinate at the meeting, telling a crowd of 3,000 people outside the town hall (around half the town's residents): "It's no good your jeering, it's going to be done." 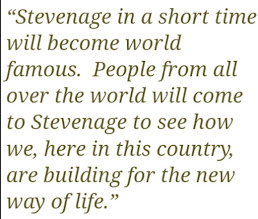 In keeping with the sociological outlook of the day, the town was planned with six self-contained neighbourhoods. The first two of these to be occupied were the Stoney Hall and Monks Wood 'Estates', in 1951. 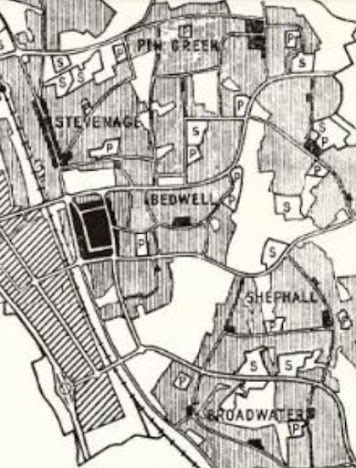 Next to be built and occupied were the neighbourhoods of Bedwell in 1952, and then came Broadwater and Shephall (1953), Chells in the 1960s and later Pin Green and Symonds Green. A more recent development to the north of the town is Great Ashby.
What was genuinely revolutionary was that the town centre shopping area was designed, from the outset, to be totally pedestrianised. On the easterm edge were the car parks, and plonk outside the Fine Fare "supermarket" (remember such innovations?) ... 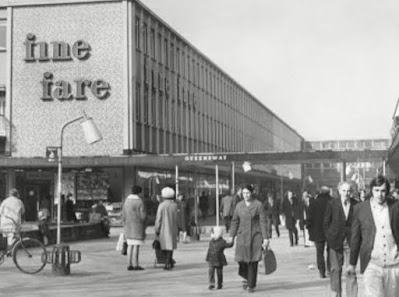 ... was the "Town Square" with its most of its roadspace given over exclusively to a bus station. 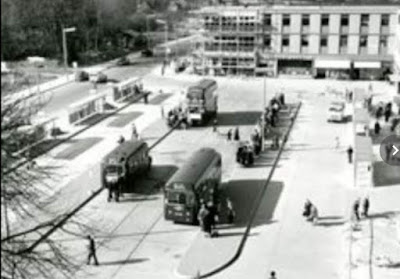 For many years it was decidedly spartan but later aquired shelters (wow!) for every stand. 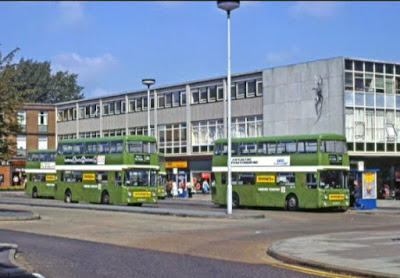 A more recent change saw the shelters upgraded (just a bit) and moved to be round the edge with the central area for bus layover. 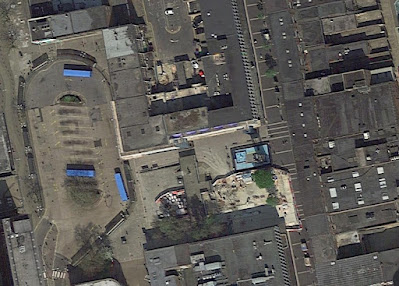 The rearrangement somehow seems more cluttered and less easy to understand with queues spilling over into general circulation areas - but it was safer for passengers as an alternative to walking across the bus lanes.
Whatever - the decision was taken to build a brand new bus station, which would be further from the shops (of course). 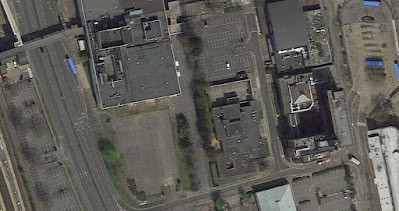 It was to be next to the huge leisure centre seen above linked to the station (off shot top left) by a footbridge.
Initial artists' impressions showed a walkway from that footbridge, past the bus station platforms at roof level and on into the town. 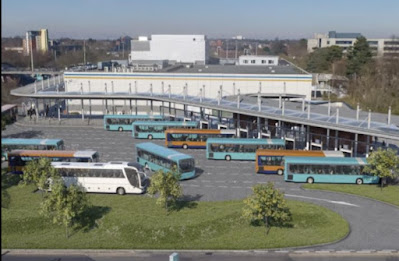 Look, no walkway. The idea of this high level footway was, presumably, to make an easy and obvious route from the shops - which at the moment it isn't.
The most straightforward way, once you know it, is to walk around the southern edge of the old bus station ... 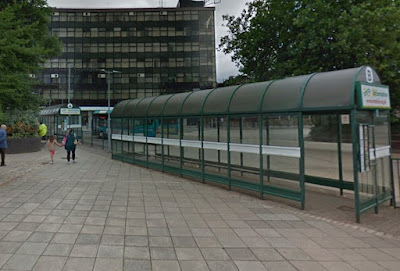 ... across the pedestrian crossing ... 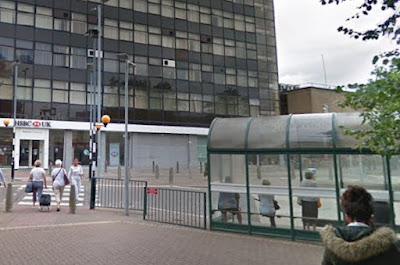 ... hang a left, then immediately a right, turning into Danesgate ... 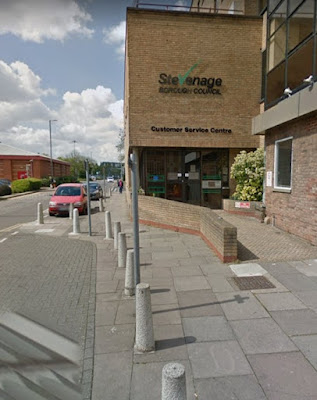 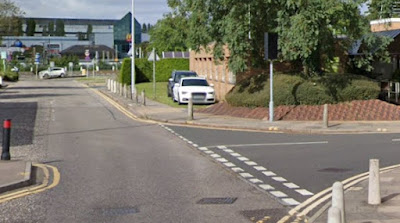 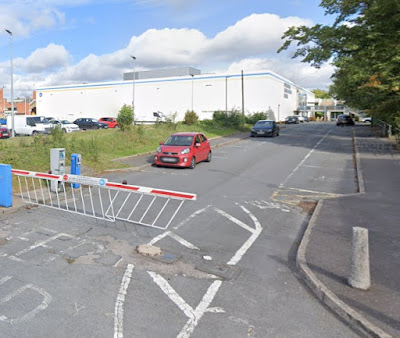 .., you will see - tada - the new bus station in all its glory.
How does that compare with catching you bus just by the precinct at Town Square?
fbb thought not!
But it is closer to the railway station whereat you can spot a few buses from near the footbridge across Lytton Way. 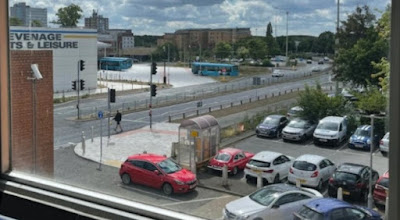 From here, you toddle across the bridge ... 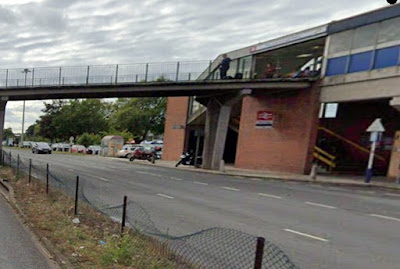 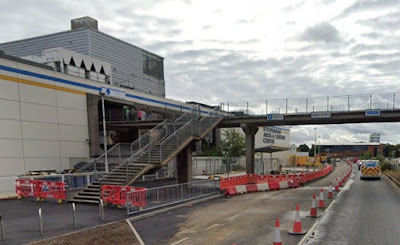 ... observing en route the lavish facilities for National Express services to/from Stevenage. Yep - a layby without shelter (so far), information or seats.
Appalling!
And what will happen to the old bus station?
An application to transform the former bus station in Stevenage has been submitted to Stevenage Borough Council, after almost 300 responded to calls for suggestions on how to use the space.
That's 300 out of a population of approx 88,000; hardly a vociferous endorsement of the plan.
The community was asked to complete a survey and share views on what leisure activities, events and food facilities should be provided in the space.
There was support for music performances with other suggestions for a community area including dance shows, comedy performances, markets, parks and art exhibitions.
A high proportion of those who responded would like to see ice skating or roller skating as part of the leisure offering, with other ideas including arcade games and community yoga.
The majority of respondents would like to see street food on offer. 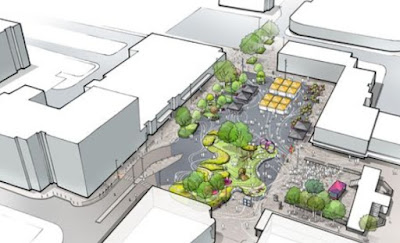 And, when the "events space" becomes tatty (which it will because of a lack of on-going funding) and dangerous, what a wonderful opportunity to sell it off for redevelopment at a vast profit to the Council!
Cynical, moi?
In tomorrow's Variety blog, fbb will share some pictures of the very poor standard of public transport information at the new bus station.
Selling Sojourns in Skegness 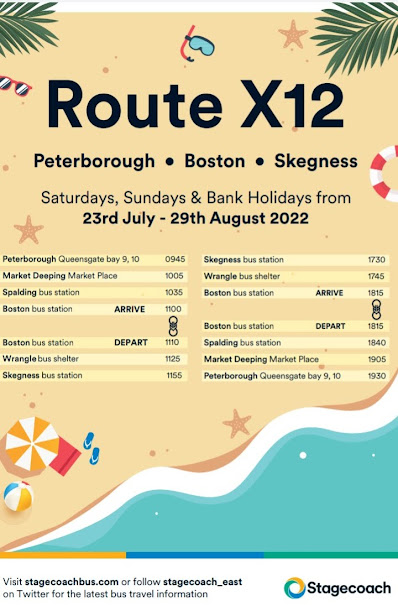 A grand day out, weekends and bank holidays, from Stagecoach. And a neat bit of financial competitiveness by matching the train's family ticket and beating "ordinary fares" on price. 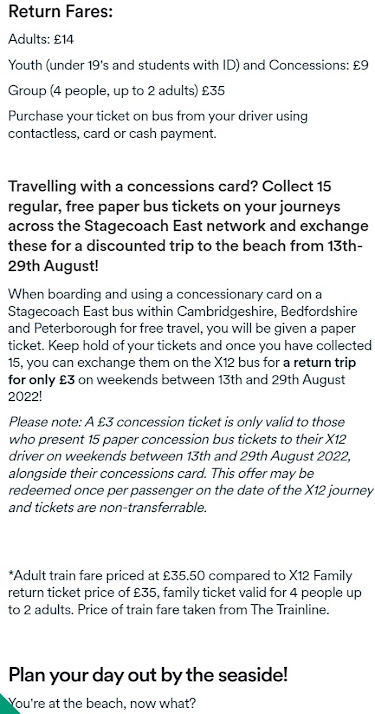 Nice one Stagecoach!
Erm, is there a printed Leaflet?
The rail journey also takes about two hours. 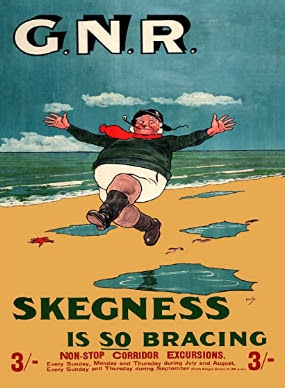 The (un)lavish Skeggy bus station is right next to the equally (in)lavish railway station ... 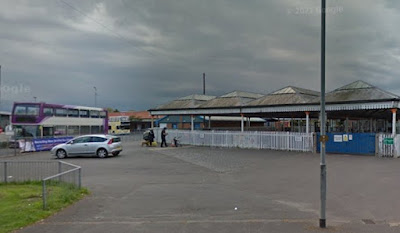 ... and right next door to the even un-lavisher coach station. 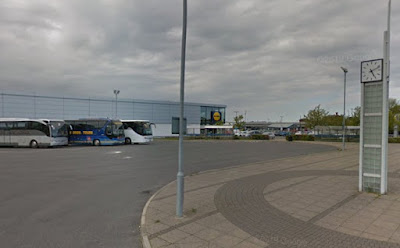 It's not too far from the beach (station upper left) ...

... but the old coach station on Drummond Road ... 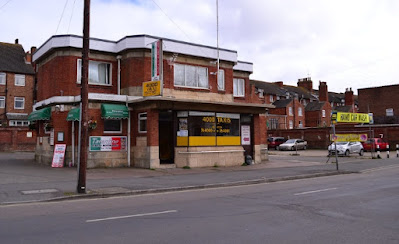 ... was closer and had "facilities"!
Like the ambience of Skegness, he walk from bus to sea ... 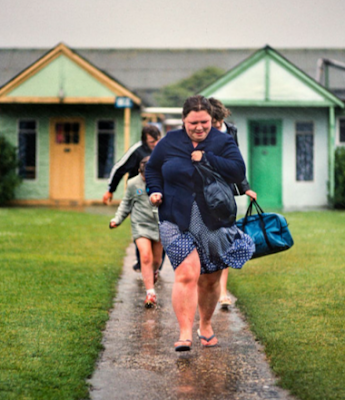 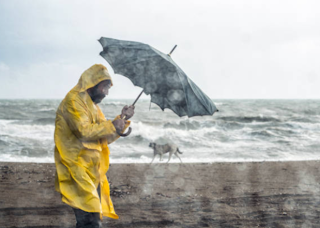 Next Variety blog : Saturday 16th July
Posted by fatbusbloke at 02:00