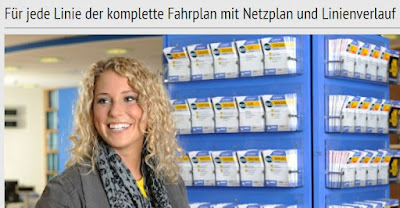 And, joy of joys, a Miniplanner is a timetable leaflet! This section of the MVG web site advises that these are available for all buses, all trams, all Underground lines and all S-Bahn.
Perhaps slightly ominously, the page also advises that they will be available to download as PDF files ...

... and they are!
Is this part of a cunning plan to withdraw paper copies from the racks. fbb hopes not but ...

... if we click on the Stadt Bus icon (far right) we get a list of every city bus route, each number being a clickable icon. 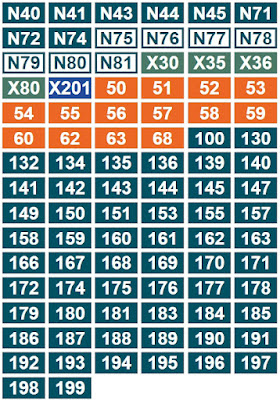 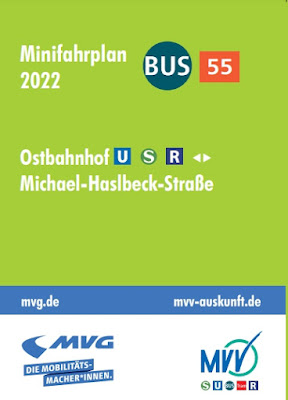 ... and a route map showing all stops. For legibility fbb has split it in to two sections, reading from outer terminus ... 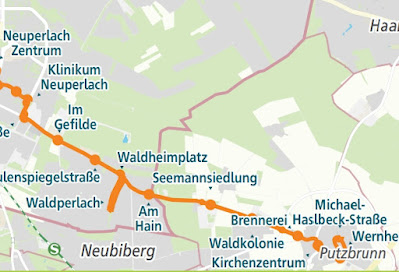 ...and on to Ostbahnhof. 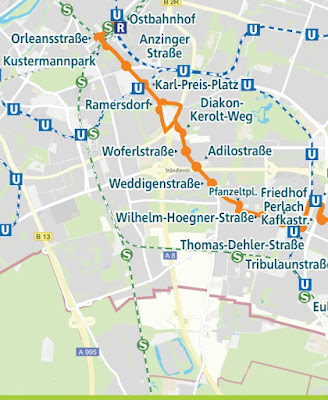 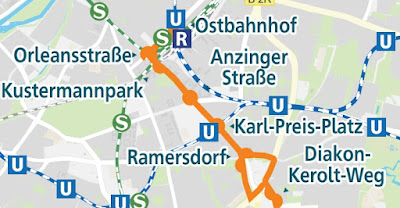 Then there is the timetable. As is common in Germany, times are given for all stops! This makes for large tables and small print.
The style takes as bit of getting used to. 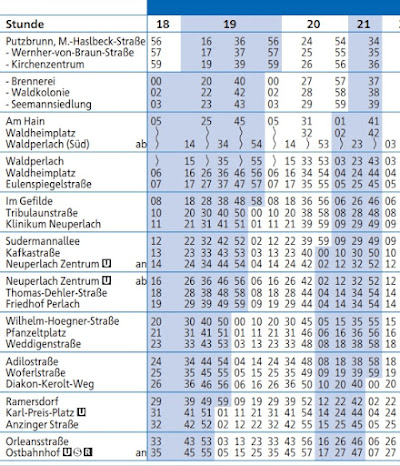 HOURS run across the top, stops down the left hand side and times past each hour are listed vertically. The blue shading allows to you keep track of each hour - so here is an  enlargement of buses from No 1 son's stop.

In this case the hours are  05   06   07 .
Once you get used to the concept it is easy to use and - BONUS - you don't get mixed up when the hour changes mid route! "Repeat patterns" are dealt with at the hour headings which means you can lose your way a bit - but with a bit of concentration it works well. 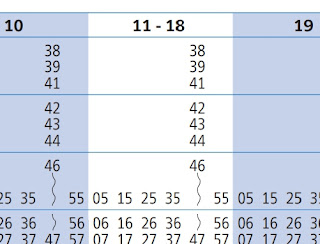 And, Even Better ...
You can get tram timetables in the same format; a heading ... 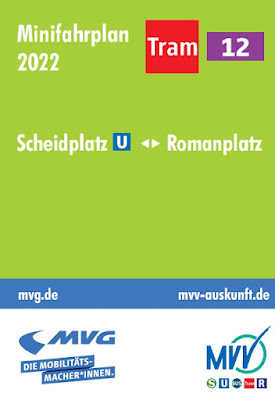 ... and full timetable! Tram timetables are secret in Manchester! 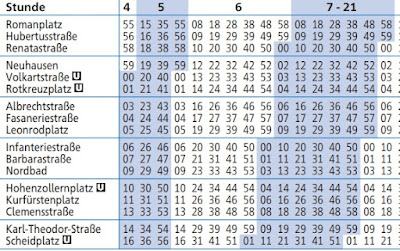 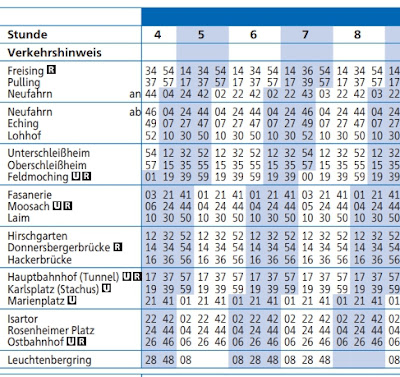 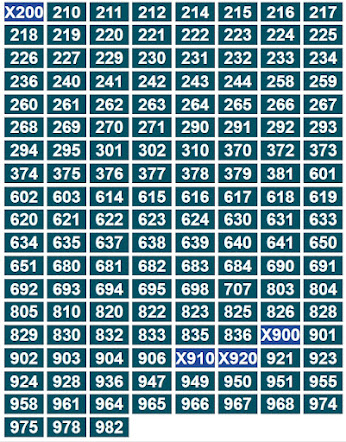 Just for fun (?) fbb sampled the X900 which follows the style of the 690 from yesterday's blog. 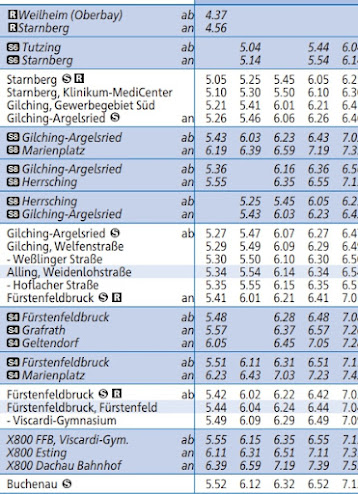 But, talking of the 690, please understand that not everything is PERFECT in MVG-land. fbb clicked on 690 in the above list and instead of getting a 20 minute bus service from Eching to Garching (see yesterday's blog), all that appeared was ... 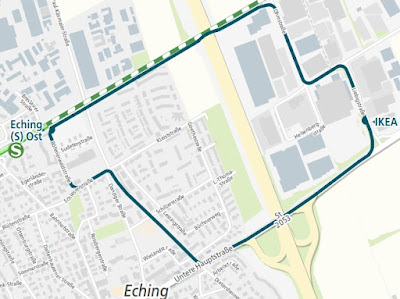 ... the 690V shuttle from Eching to Ikea! No sign of the "proper" 690!
Whoops!
But, minor blips apart, the MNG web site is a superb example of how to provide public transport information - that is information about ALL public transport - in one place and easy to find and understand!
Revisions Re-Vamp Victoria (for £30 Million)
It doesn't take the architectural nous of Timmy or Siddy to recognise that London Victoria station was once TWO SEPARATE stations. 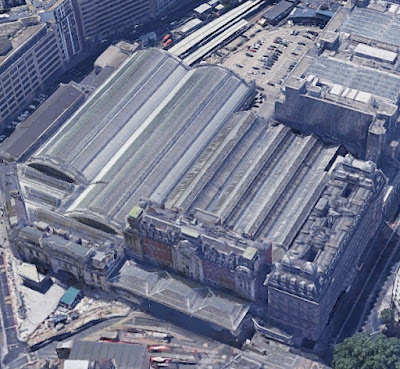 One was for the South Eastern and Chatham Railway ... 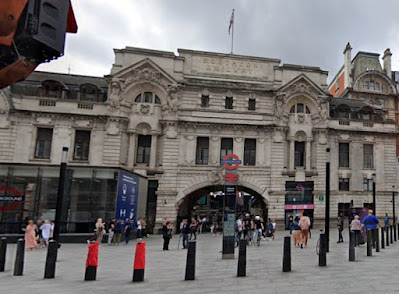 ... and the other for the London Brighton and South Coast Railway. 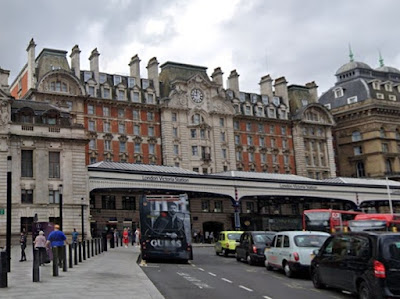 As well as making the station a mess for today's users, neither "half" is really big enough for peak use today!
So Network Rail has come up with a cunning plan. Take out some of the retail outlets from the platform ends and locate them elsewhere; then put in lots more barriers. Thus the crowds can get in and out more easily. 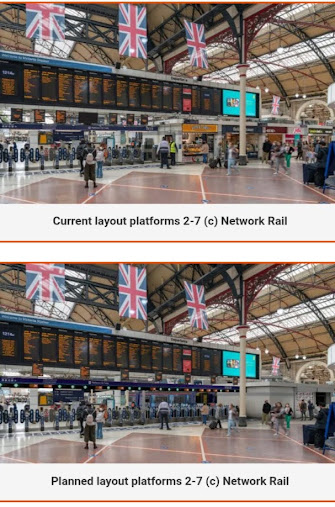 Out goes one Upper Crust. 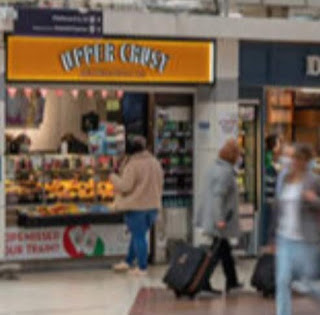 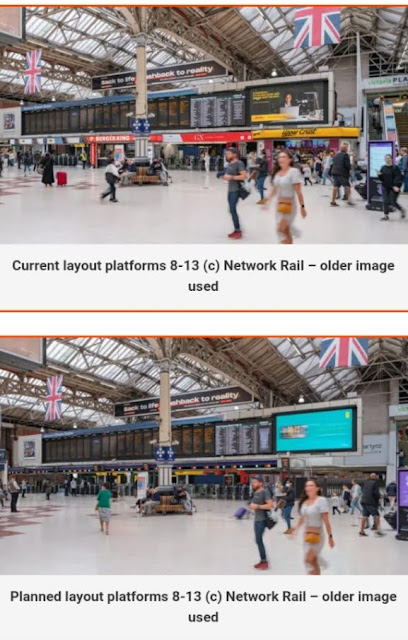 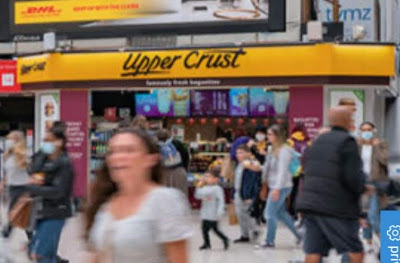 ...and the Gatwick Express booking office. Then at the far end of the LSWR section ... 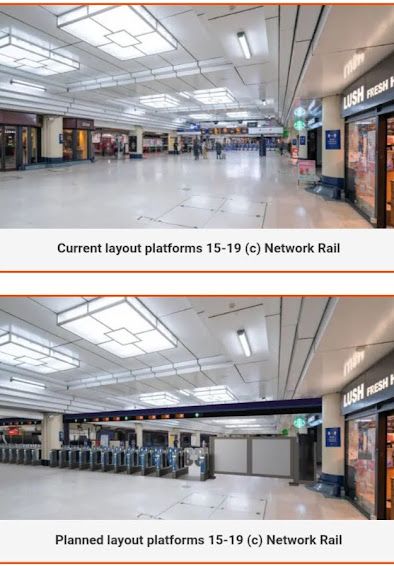 ... the gate line is moved to give more circulating space and better access is provided to the shopping centre built above the platforms.
And this "tinkering" with the layout will cost £30 million!!! 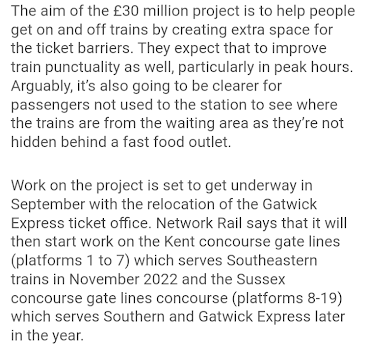 At least the toilets are now free where once it cost ten bob (OK, 50p) just to pee!
Money well spent? Might it not have been better to put £30 million in the biscuit barrell ("cookie jar" for our readers across the pond!) and put it towards a complete rebuild of the whole station behind those magnificent frontages?
Bad News Everywhere
Well, everywhere that Stagecoach operates. 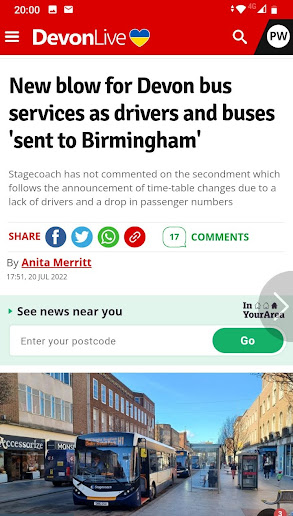 fbb understands the Stagecoach has won the contract to provide transport for the Commonwealth Games starting next weekend in Birmingham. Several hundred buses and their staff are bering transferred from Stagecoach operating companies throughout the UK.
But Stagecoach is already short of staff.
So Commuters st Crossmead, Passengers from Pinhoe and Shoppers from St Leonards, brace yourself for cancelled services, missing buses and greater unreliability for the next three to four weeks. Bus travel will be full of fuss travel in Exeter.
Good, innit!
A Tough Puzzle 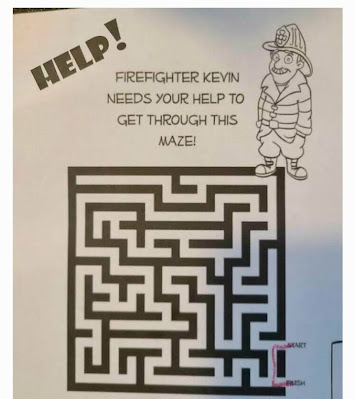 But a person of stunning intellect has solved it. 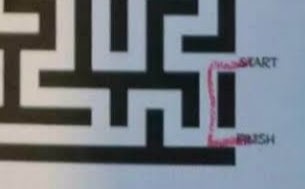 If only the bus industry were so simple to resolve, from START to FINISH!
Next Variety blog : Sunday 22nd July
Posted by fatbusbloke at 02:00