From Green Field to "Venue" 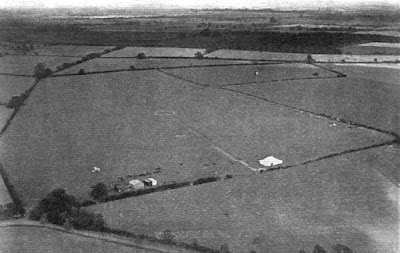 It was in 1927 that a group of enthusiastic flyers formed a club and bought a field at Sywell near Northampton. There was a club room (club hut?) and a small aircraft hangar and that was about it! 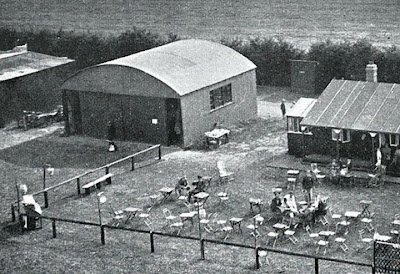 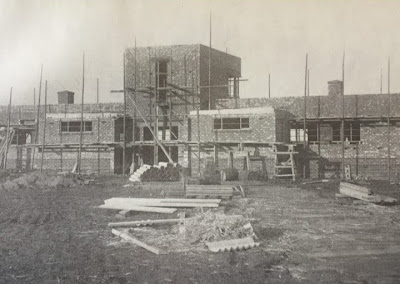 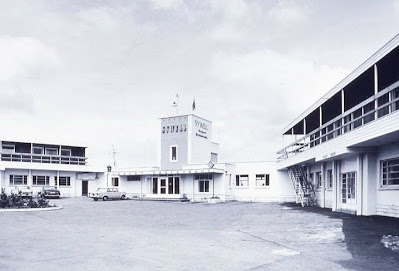 ... which, in turn and after a major fire, became the Aviator Hotel ... 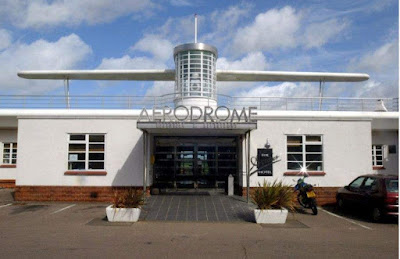 ... but retaining something of the Art Deco feeling about it.
Briefly, scheduled flights were operated in the 1950s, but mostly it has been a club field. Visitors have included Amy Johnson in 1935 ... 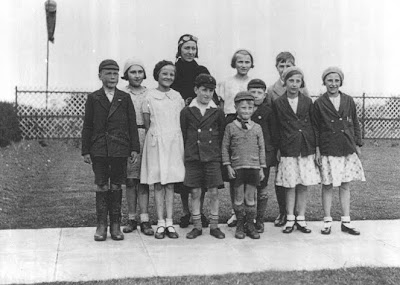 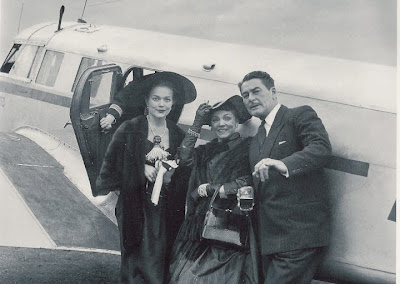 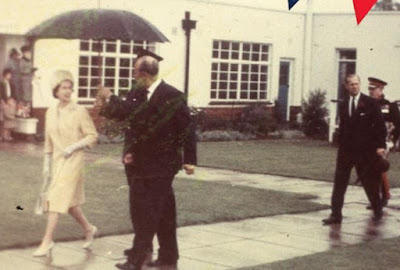 Wellington bombers were repaired in a huge hangar from 1939 onwards ... 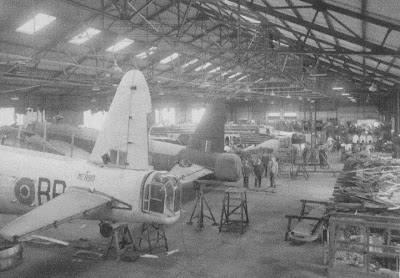 ... a building which is now bookable for "events". 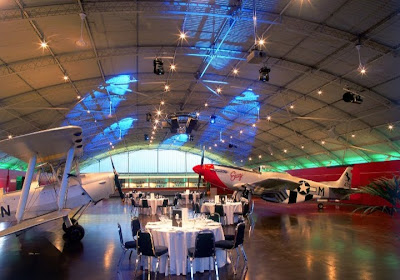 When fbb was a chubby little lad, he was occasionally taken for a Sunday afternoon car ride to Sywell to see the planes. It was so, so exciting if he saw one actually flying!
Where once stood that original club house and hangar is now expanded into a significant industrial area - specialising, as ever, in "logistics" and warehousing. The former flying field has also gained a concrete runway 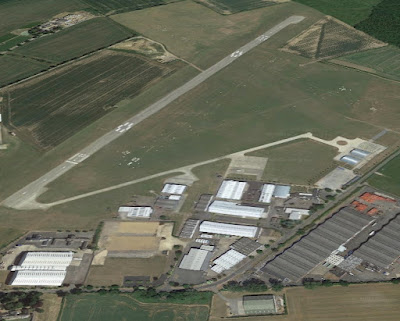 But now we read of possibly the greatest accolade for this little airfield. It is to host the annual Buses Festival! 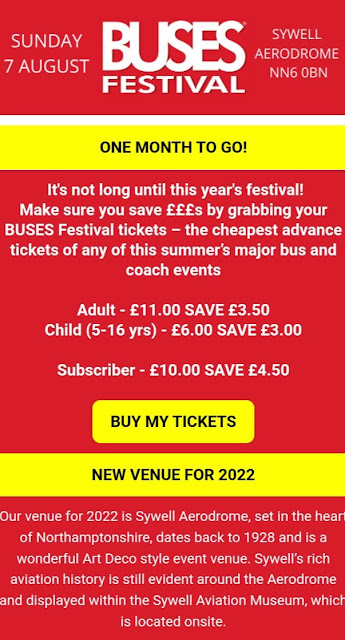 There are service buses to Sywell Village (Stagecoach 10/X10) ... 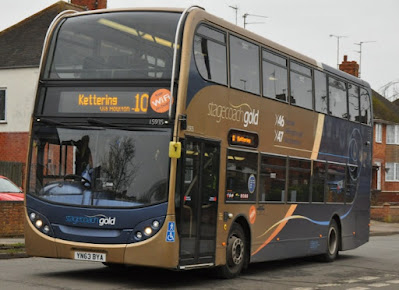 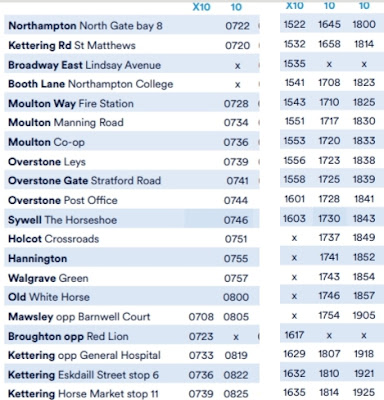 ... even if the festival were open on Saturday - which it isn't. The hourly daytime buses do not venture into the dark and fearful corners of Sywell and Old etc!
There are no Sunday buses on 10/X10 which is when the festival happens! Odd, is it not, to have a buses beano that you cannot get to by bus? The only option is to arrive in Wellingborough by train and catch the free Shuttle bus.
But worth attending - IF you can get there!
Hot News in Sheffield! 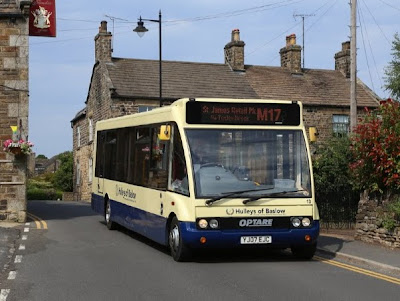 Bus route M17, which runs from Dore (to the west of Sheffield centre) ... 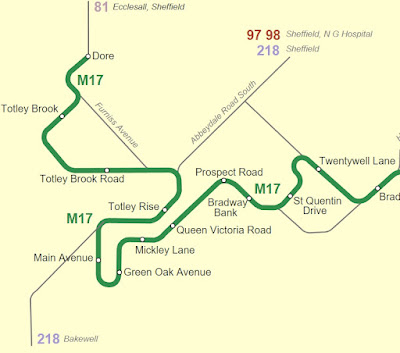 ... to Jordanthorpe in there South, wiggling all over the place on the way! 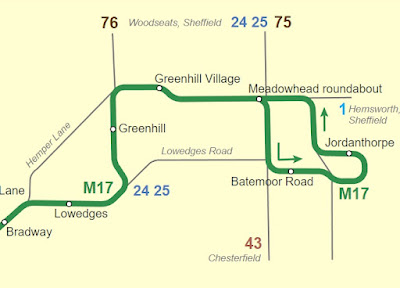 It offers six journeys on Mondays to Fridays but, steps back in amazement, a Saturday service of just four journeys was reintroduced from 4th June.
Deep joy! But nobody told the public about it!
On 7th July, a van plus man from the PTE's contractors went round sticking labels on all the bus stops. 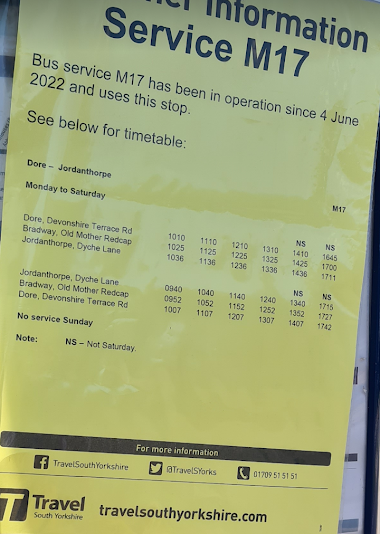 That is over a month since the Saturday service started.
There is no printed information anywhere.
There were no notices on the bus - and there still aren't.
Hulleys (who operate it) show no information on their web site.
SYPTE (who pay fort it!) are still showing the Monday to Friday only journeys ... 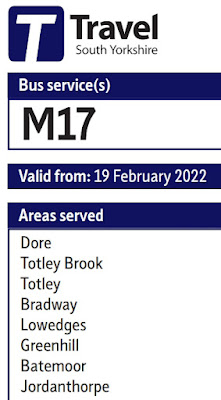 ... with nothing for Saturdays. 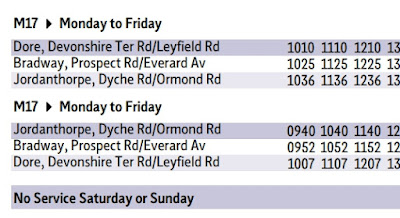 Good innit?
Slightly Better - But Not Much
Some time back, fbb reported on the withdrawal of most Transpeak journeys between Derby and Matlock. It hasn't run north of Buxton for some time. 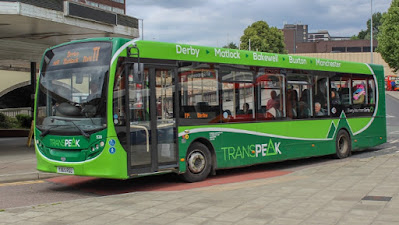 Tomorrow (Sunday 10th July) was to have been its last day. 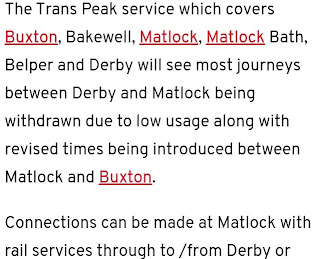 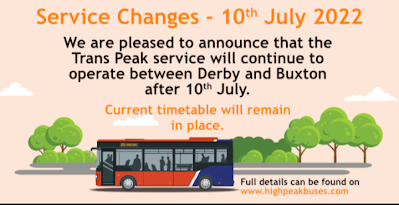 It appears Derbyshire have found a bag of 10p coins in a dusty cupboard and have agreed to subsidise! Their timetable Library still showed the service ending as of yesterday evening.

There is no information about any restoration or replacement anywhere else; except a note on High Peak's web site. 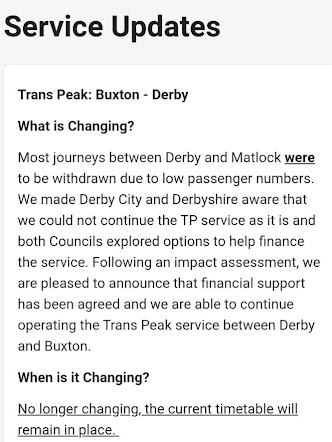 Good, innit?
Both these are, of course, typical examples of the Grant and B*r*s policy of Building Buses Back Better ...
BY NOT TELLING ANYONE!

In case our loyal reader wants to know, here is an extract from the unchanged timetable. 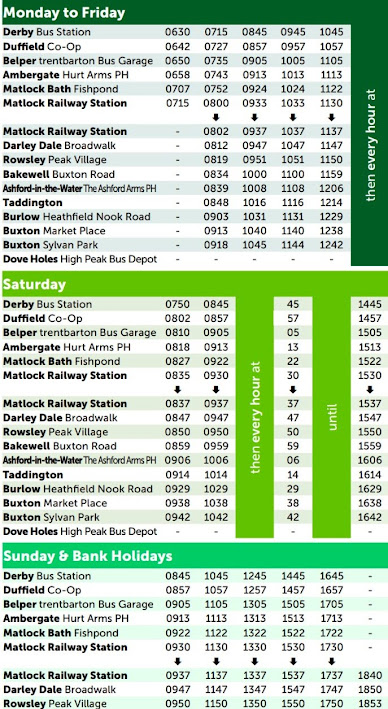 Next Variety Blog : Sunday 10th July
Posted by fatbusbloke at 02:00