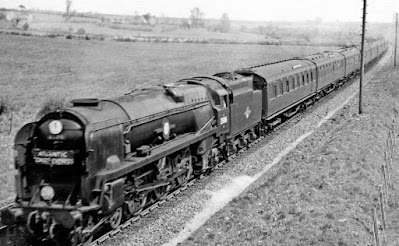 The ACE was renowned as the "crack express" of the Southern Railway's western division, running from Waterloo (traditional departure at 1100) via Salisbury and Exeter and serving North Devon (and North Cornwall!) holiday resorts. Wikipedia summarises the train's history and fbb summarises Wikipedia.
Saturdays were always the busiest and in August 1939 the ACE was shown in Bradshaw's Guide as five separate trains departing from Waterloo; serving Ilfracombe (10:36), Padstow (10:40), Ilfracombe again (10:47), Bude (10:54) and a final departure at 11.00 with portions for Padstow, Bude and Plymouth.
At various times Exmouth, Sidmouth, Seaton and Lyme Regis had through coaches.
In the winter timetable, one train was sufficient for all of the branches, and stops were made at all but the most insignificant stations west of Exeter. Significant delays were frequent at the junctions, as coaches were detached or attached and shunted between the various sections of the train, belying the name of "Express".
The 1950s marked the highpoint of the ACE, with the first mile-a-minute timing on the Southern Region (as the Southern Railway had become) with a 12:23 arrival in Salisbury, 83 miles from Waterloo. Gradual improvements in schedules continued until the final acceleration in autumn of 1961, when the journey time from Waterloo to Exeter Central came down to 2 hours 56 minutes.
It is worth noting that today's stopping service of class 159 trains ... 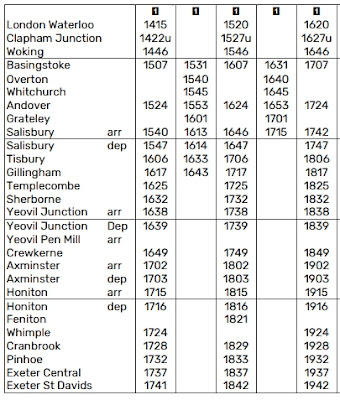 ... takes abour three hours twenty minutes for the same journey - not bad at all for 18 stops. 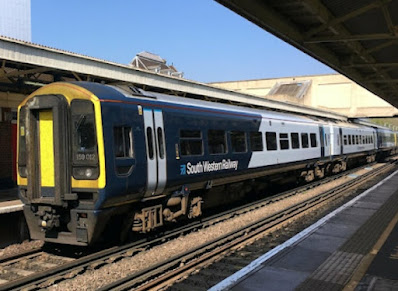 Note also that the splitting of the ACE trains and the shedding or collecting of through coaches at branch line junctions could cause delay and often did!
Expresses from Paddington are, of course, much quicker to Exeter these days but there are now no regular through services to the North Devon coast by either route - because there are no stations! Just in case you are about to point out an fbb error, Newquay and St Ives were never ACE stations.
But fbb was intrigued to see an advert for a re-run of the ACE by preserved train. 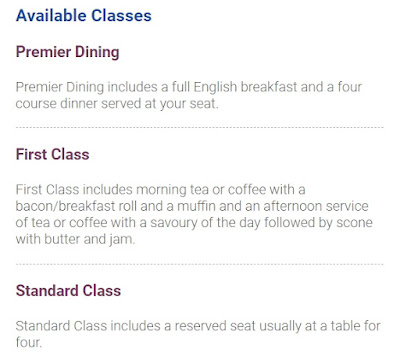 To be fair, the publicity said "using part of the route of the Atlantic Coast Express" which actually meant its passengers has a day trip to Exeter and back but hauled by steam. The journey back to London was via Taunton and not the ACE's route!
The day out was not cheap. 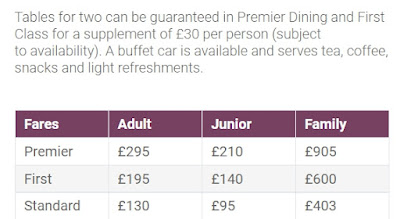 And it was definitely NOT express. Below is a selection of actual timings from the advert. 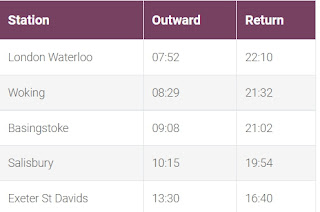 ... and arrived at Exeter St Davids at 1330; five hours and thirty-eight minutes of steam-hauled joy!
Of course, the reason for this pedestrian saunter along the South Western main line was the need to fit in with scheduled trains, especially on the partly singled stretches west of Salisbury.
And there was a long stop (40 minutes approx and longer than planned) at Salisbury to fill up with water. 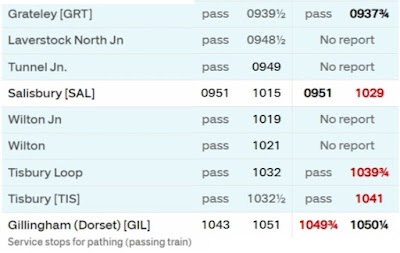 There should have been an eight minute wait at Gillingham, but the delay at Salisbury wiped that out, and maybe delayed a Waterloo bound trains in the process.
More waits further down thee line ... 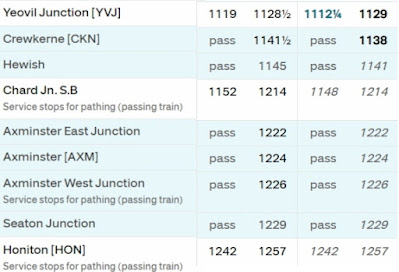 ... twenty minutes at Chard Junction (alas no station there any more) ... 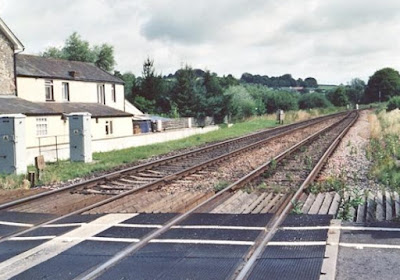 ... and 15 minutes at Honiton.
The train was scheduled to pass Axminster at 1224 and Mrs fbb offered to integrate this timing with a call at Axminster Co-op. Seaton Co-op has closed but used to stock Mackies ice cream - easily the best ever ("Scottish, you know!", says Glaswegian Mrs fbb, pointedly). 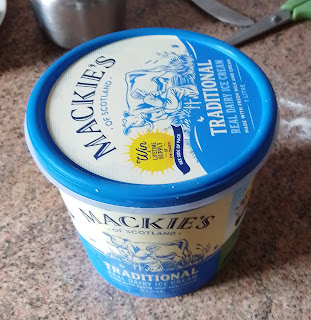 A trip to Axminster Co-op might well achieve a further stock replenishment. It did!
The train was scheduled to trundle through Axminster on Platform 2, and, using his worldly wisdom, fbb worked out that to traverse the junctions at both ends of the loop, the train would need to be travelling reasonably slowly.
It was raining!
Then the ever helpful ticket clerk at Axminster announced that the train would run via Platform 1. General chaos ensued as keen photographers hurried across the footbridge from 1 to 2 to get a good sideways passing picture. Others hurriedly migrated in the other direction to see the loco pass by at close quarters.
fbb does not do "nipping across footbridges" these day, so stayed where he was, phone camera at the ready and drizzle dribbling down his neck.
It really is so annoying when your phone camera automatically switches off when it thinks nothing is happening. fbb's did as the train stormed at high speed under the road bridge at the London end of the station. By the time the old man had gibberingly (and incompetently) prodded his slightly soggy phone screen, the train was screaming past in full cry.
A magnificent, but un-photographed, experience.
The old man did not even spot which loco was at the front!
But thanks to train watcher Jason, who showed admirable sympathy for the old bloke's oldness, fbb was gifted a video.
And here it is!
Many thanks Jason!
It doesn't take much imagination to remember the power and magnificence of steam-hauled rail travel, even if it was ludicrously inefficient technically and very expensive to staff! Certainly as your slightly soggy blogger stood within feet of the monstrous beast powering through Axminster's Platform 1; well, he found it quite scary. 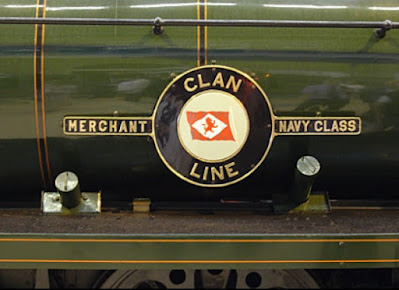 But maroon coaches; on the Atlantic Coast Express - scandalous!
Incidentally, the advert for this excursion showed a splendid picture of Clan Line in full roar ... 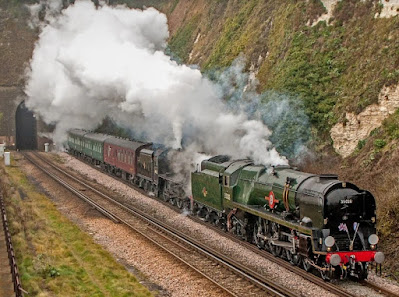 ... exiting the Shakespeare Cliff tunnels near Dover! Maybe steam-hauled gricers don't mind where they go, as long as they get a good meal and can lean out of the window and get hot smuts in their eye!
Not Much Variety? Snippets!
Illegal Legal Lettering?
Every PCV (Passenger Carrying Vehicle) must carry the name and address of its owner/operator in lettering 1 inch high (might be 2.5 centimetres now?). If the vehicle os borrowed by another operator, it must carry a label stating "ON HIRE TO" its temporary operator.
So fbb suggests that this "legal" lettering on an Arriva bus ... 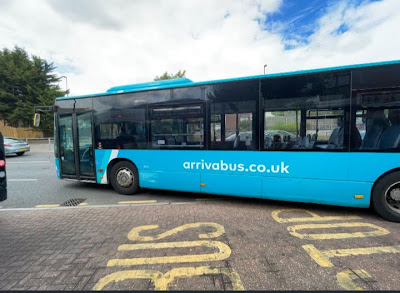 ... is certainly not legal at all. 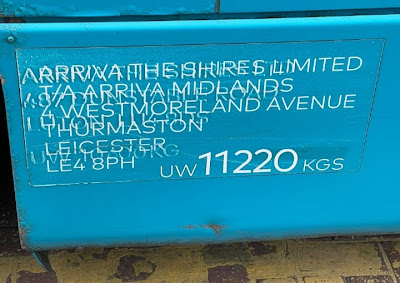 Too Much Information?
Manchester Piccadilly has two very busy through platforms, seen below, lower left. 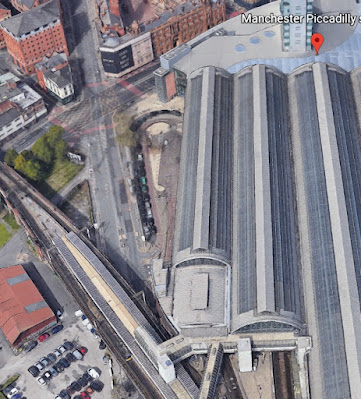 Is this signage helpful or confusing? 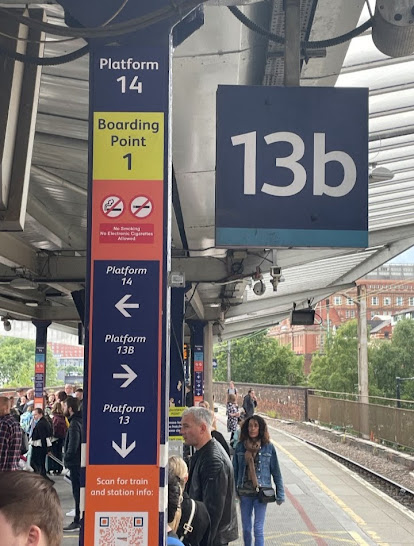 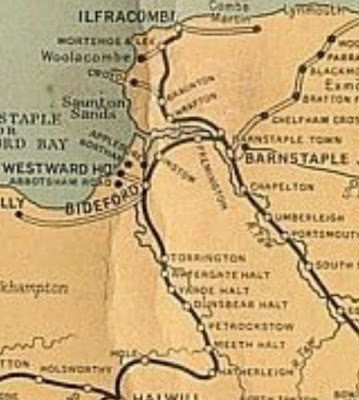 Okehampton to Bude and Padstow 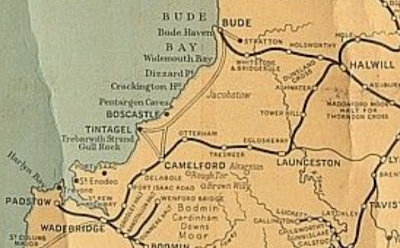 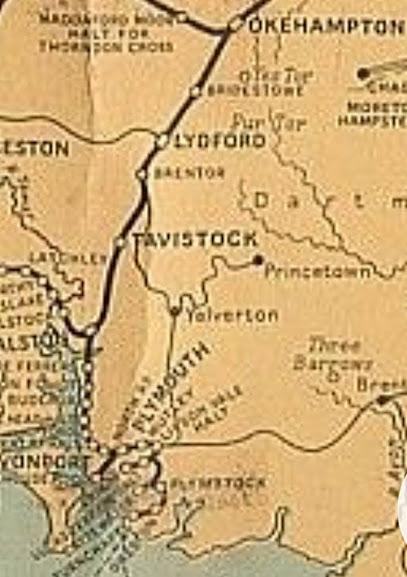 In tomorrow's blog we meet lots of sheep, go to hospital and put a train back together! And there will be news of more servicer cutbacks.
Next Variety blog : Tuesdau 5th July
Posted by fatbusbloke at 02:00