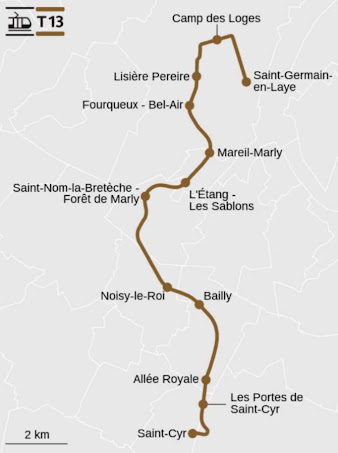 Don'y worry if the above is a bit fuzzy - better maps will follow. But we are exploring the latest arrival Tram-wise in Greater Paris. This tram is a tram-train and, like Tram T4, is operated by SNCF as part of its "Transilien" network.

At Saint Cyr the trams will offer connection with one of the many branches of RER C (the YELLOW one). The station was once called Saint Cyr L'Ecole and the line was on an embankment, hence the need for many staircases. 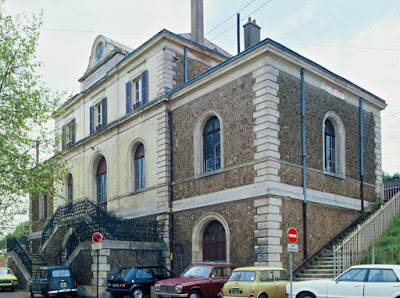 The embankment is still there and rather ugly from the point of view of local properties ... 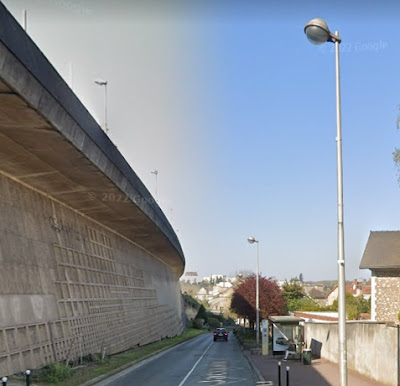 ... and the station, although more efficient, lacks the character of the original. 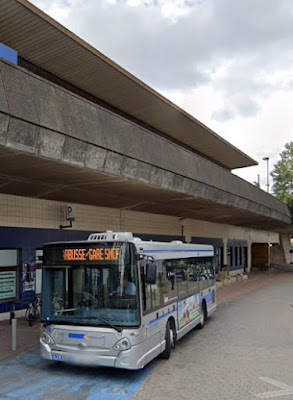 But, of course, it does have a bus connection! 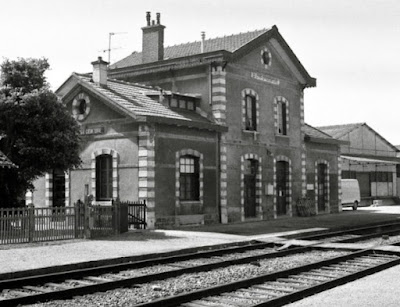 ... but will not be used by T13. Before we see what replaces the old GC stop, let us see how trams get from the former rail route and into the present Saint Cyr station. This view from the main road East to Versailles ... 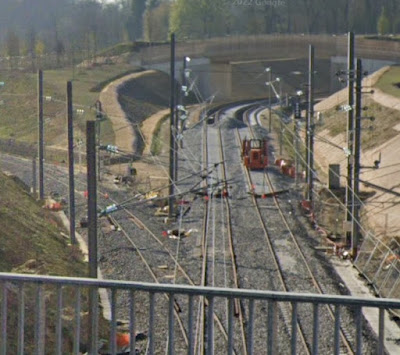 ... shows a single track veering left on the route of the GC, which leads to the T13 depot; with the double track of the passenger tram service turning sharp right. It will then climb up to terminate level with the RER C tracks.
When Streetview was viewing the back streets of Saint Cyr, only the clearing of undergrowth had been done ... 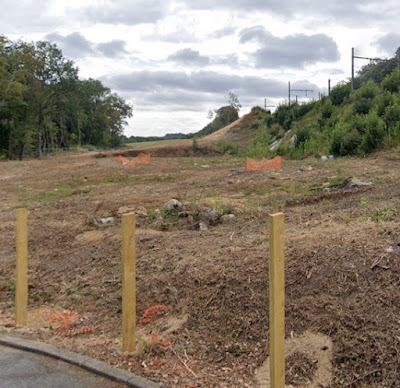 A Google aerial view reveals a little more of the new-build route into the station. 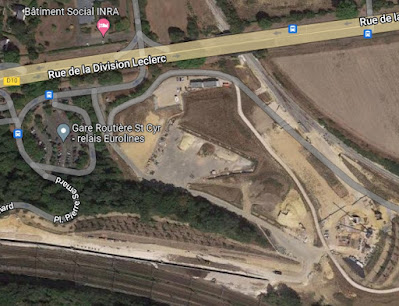 The sharp curve is bottom right.
The replacement station for the old GC stop is a little further north .. 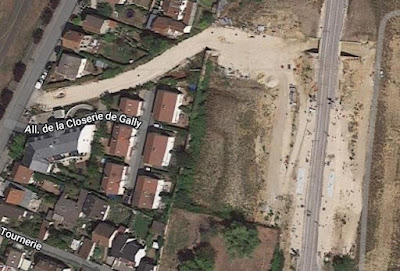 ... reached by a new-build access road along which StreetView has yet to view the treet. 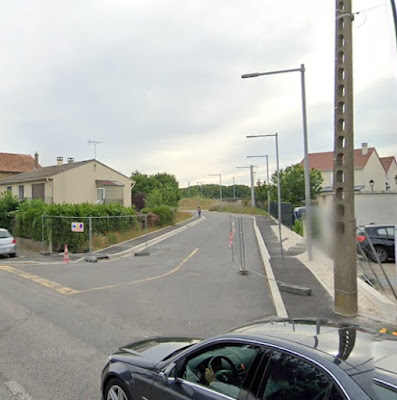 The new stop is called Les Portes de Saint Cyr, although whether the town ever had gates (portes) this far out is debatable. An artist's impression implies that buses will serve this tram stop! 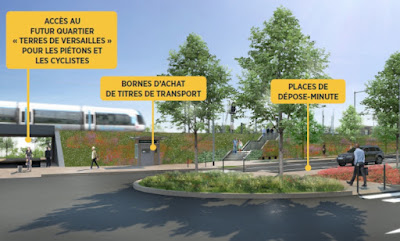 Let's look at one of those detailed maps. 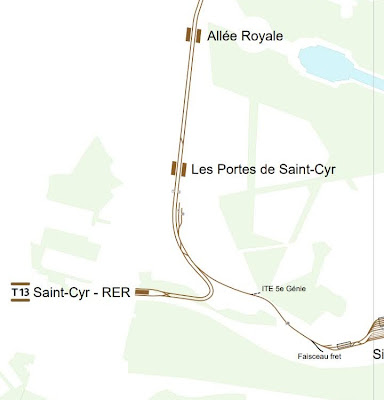 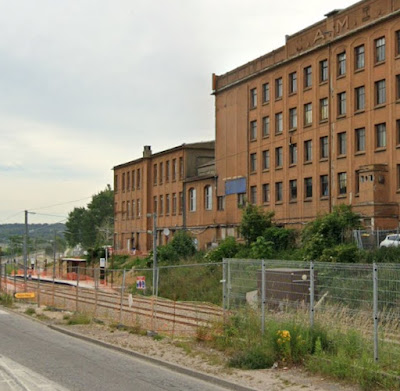 You can spot the tram station lower left, There was no GC station here.  But there was a huge rail-served warehouse, still in use but without the sidings.
The view towards the Palais de Versailles is just about spottable as an open space between two lines of treet. 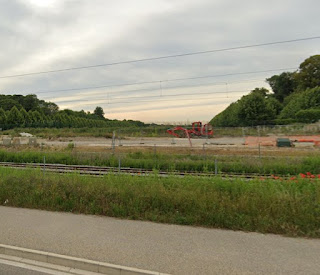 Note that the terminus is now called Saint-Cyr RER.
And on to the next section. 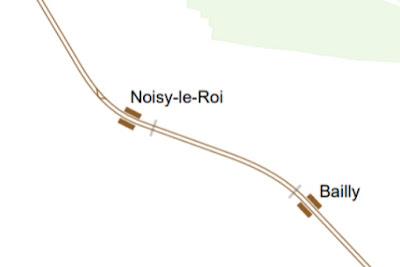 The station at Bailly ... 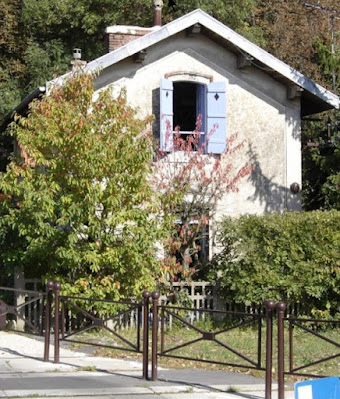 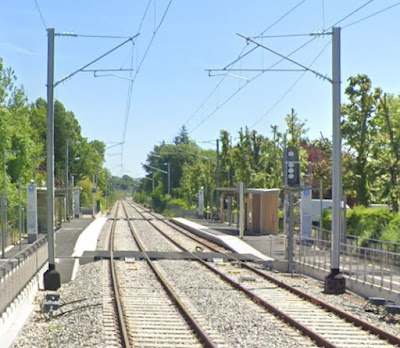 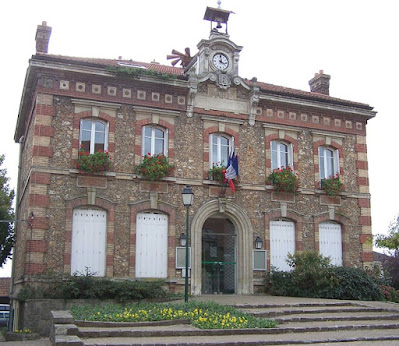 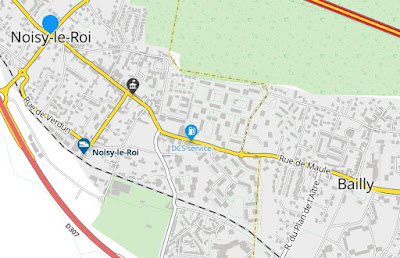 But when fbb sought pictures of Noisy le Roi station he was surprised to find in open and in good order ... 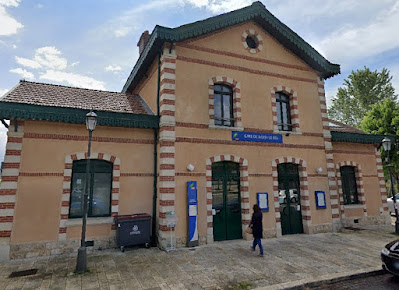 ... with full signage and, no less, trains in the platform. 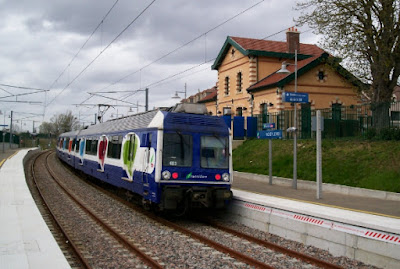 But, hang on there! Did not fbb imply that T13 was a new service running, at best, on some old freight route called the Grande Ceinture? Where have the passenger trains come from and, more to the point, are they still there?
But there are recently refettled bus stops just outside the station ... 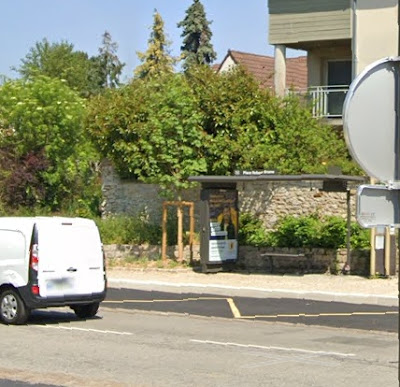 ... in both directions. They are obviously smartened up for the arrival of the tram! 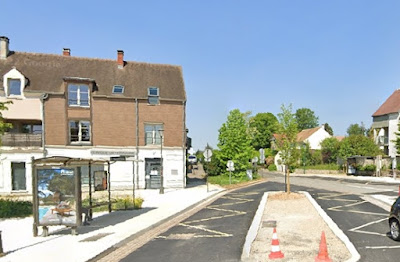 There is no mention of trains on Google Maps; 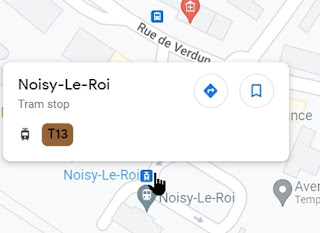 The answer to fbb's befuddlement would appear to be that the trains have been replaced by the new tram service.
So, obviously fbb has missed something.
But what? And when? And where?
Maybe the old man can sort it out for tomorrow's blog!
In the meantime here is a picture of a T13 tram on test. 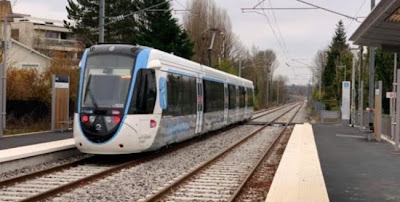