Yet More Whines For The 29s! 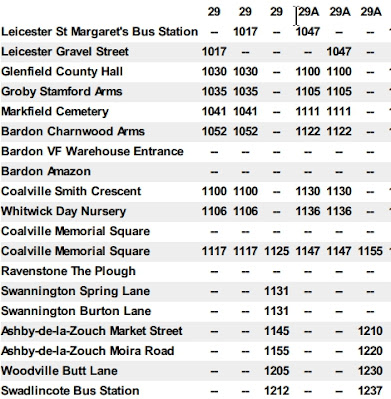 Finding out exactly where buses go is nearly impossible from a timetable alone. You really do need a map and we have already seen that once the confines of "Greater Leicester" are breached there is a hopelessness in maplessness!
The timetable makes it clear that, between Coalville and Ashby-de-la-Zouth, the 29 runs via Swannington but the 29A doesn't. And that is about it!
The crude Leicestershire diagram shows the split ... 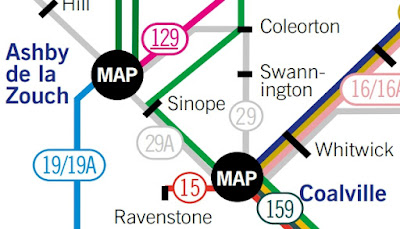 ... but mentions Sinope and Coleorton which do not appear on the timetable. The 29 doesn't actually get to Coleorton, merely calling at The George on the main A512. 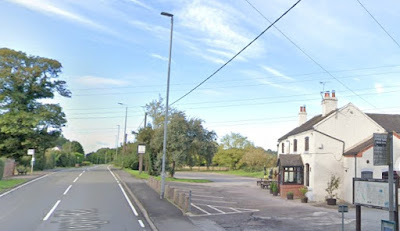 A proper map might help. PH (upper left-ish) is The George. 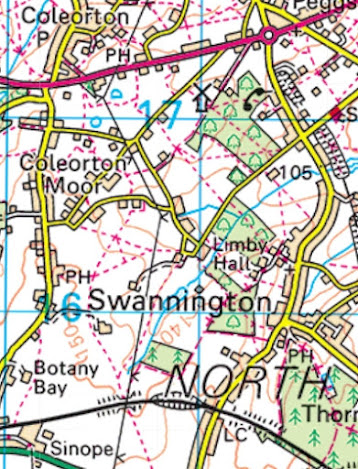 fbb does not know why Swannington gets TWO time points with buses calling at both at the same time. The stops are next to one another! 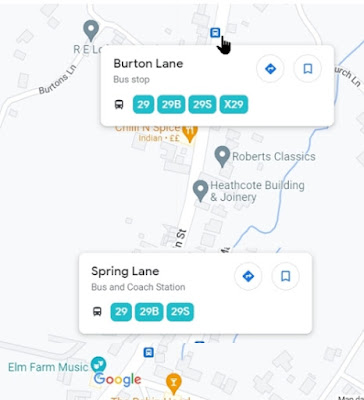 But at least between Leicester and Coalville the two routes are the same.
Too true, but VERY difficult to follow - unless you know!
There is an Arriva Map, dated 2011 which may (or may not) be right - but you cannot find it from the present Arriva web site. 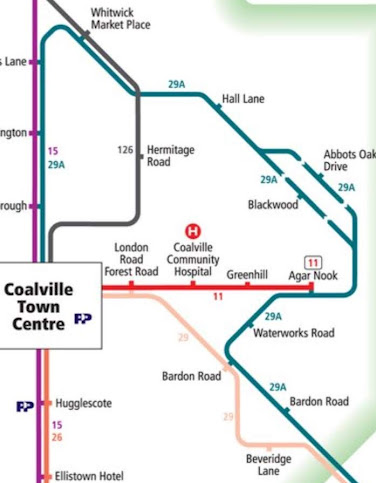 Then there is the County map of the Coalville area dated 2021 wich may (or may not) be right. 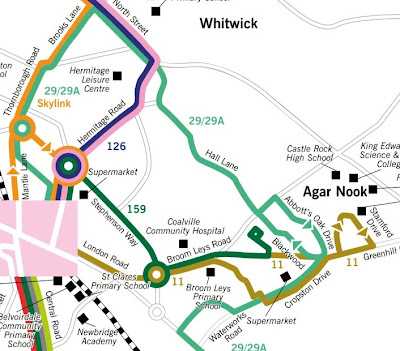 The two are certainly NOT in agreement as to where Agar Nook might be.
Faced with a certain amount of frustration, fbb decided to draw his own. He started by listing the roads along which the 29/29A might travel c/o Google maps, extrapolating from the bus stop icons. You can follow it (MUD GREEN) on the map above - if you dare!
The list of roads starts bottom centre of the above diagram.
Bardon Road
Botts View
Beech Tree Road
Waterworks Road
Cropston Drive   ) one straight
Woodbrook Drive  ) road which
Cropston Drive   ) changes its name
Greenhill Road   ) outbound from
Blackwood        ) Leicester
Abbots Oak Drive ) inbound to
Meadow Lane      ) Leicester
Hall Lane
City of Dan
Market Place
North Street
Brooks Lane
Thornborough Road
Stephenson Road (the By-pass)
Whitwick Road
Bardon Road
Memorial Square
The roads marked in RED are also shown on the fbb map below. 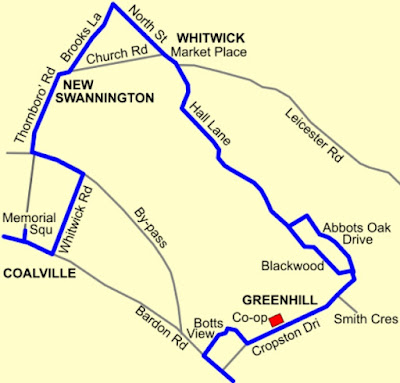 Please note; Smith Crescent (lower right) is an insignificant side road. This is shown on the timetables as Coalville Smith Crescent, which technically it probably is. BUT that name is unhelpful and misleading. Far better would be to use "Greenhill Co-op" ... 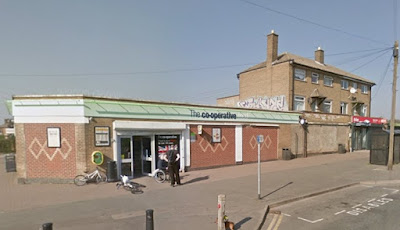 ... which still seems to ber trading and is easy to spot en route!
So our loyal and hard-working brain-straining (public transport IS hard work) blog readers are now fully equipped and eager to have a quick butcher's at the timetable for the other direction.
Perhaps not so eager when they see it! 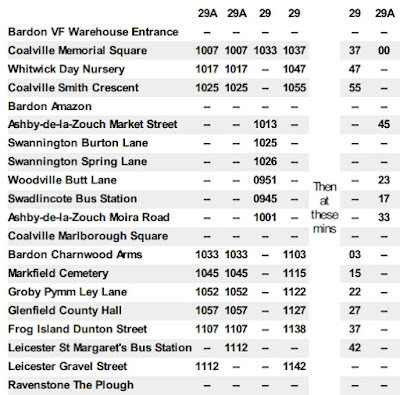 Now fbb thinks that our reader (and any other sane bus passenger) would expect the places listed on the left to be as follows ...
Swadlincote
Woodville
Ashby-de-la-Zouch
Swannington
Swannington
Coalville
and continuing to Leicester
... i.e. the opposite of the outward route as shown at the head of this blog.
But, no! The curse of Awful Arriva's Arguably Atrocious Attitude to its passengers begets this list of places:- 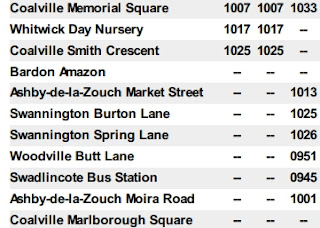 Take a note of the interesting features of this timetable.
The 1033 bus runs from Coalville to Ashby in minus 20 min.
The bus then calls at Swannington and Swannington correctly although the stops in this direction have become one minute apart.
The bus then jumps back to Woodville between Ashby and Swadlincote
The bus travels to Swadlicote in minus 6 mintes
The bus runs back to Ashby-de-la Zouch in a further minus 6 min.
The next departure at 00 is equally potty.
And it gets even better on Sundays. 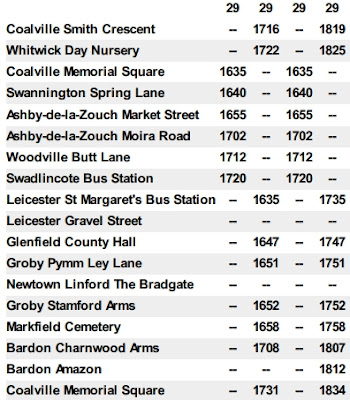 On what should be the Swadlincote to Leicester table (or maybe it shouldn't) buses are shown from Coalville to Ashby-de-la-Zouch correctly. HOORAY.
But they appear to be travelling in the opposite direction from the rest of the table.
But buses from Coalville (top of table) run towards Leicester via Whitwick as usual ...
Then direct to Leicester in minus 50 minutes.
And back to Coalville (only) running at normal times.
And there's more ... 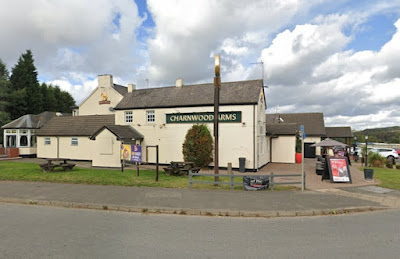 ... not making it as far as Coalville.

Of course it is all nonsense! But it has to be beyond belief that a bus company of national status (what status?) could ever allow such drivel to be published.
It is obvious that the company does not want passengers!
Snippets
Each Saturday morning the fbbs meet with "the girls" for coffee in a caff on Seaton sea front. 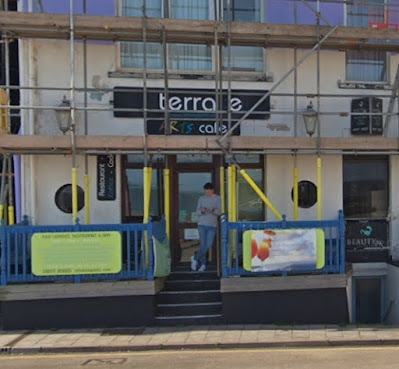 It has a veggie/vegan menu, so is not frequented by fbb for meals; but the coffee is OK and the conversation free flowing; a pleasant hour on Saturday morning and you can keep an eye open for interesting bus workings at the two sea front stops.
There usually aren't any interesting workings - but soon we will have Axe Valley's tendered journeys to Lyme Regis to observe.
Anyway, whilst chomping on his teasted toecake, fbb spotted this on the specials menu. 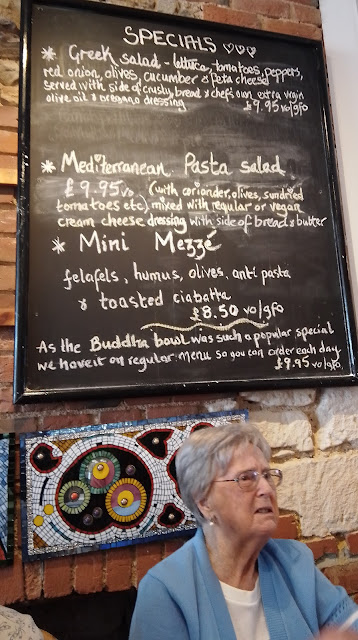 ... presumably something for those who are profoundly opposed to eating pasta! fbb has tactfully (?) pointed out to the Barista that he means AntE Pasta ... 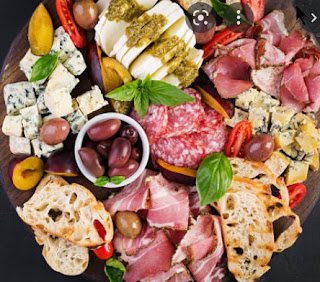 i.e. that which you eat Ante (= Italian for "before") your pasta meal. The sign is, as yet, unchanged!
The "girl" in the picture has just celebrated her 93rd Birthday.
Readers may remember the paper bus "blind" for the long-gone Birchley Railway, showing 784 to Wadhurst on sale in an antique shop nearby. 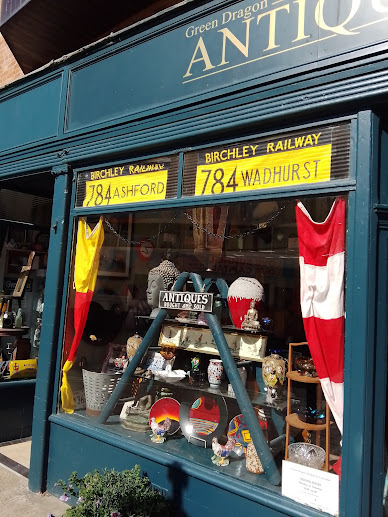 Its pal has now appeared, 784 to Ashford.
Will anyone ever buy them?
Tomorrow we are off (bloggily) to Europe where we would expect public transport information to be much, much better than that in Leicester.
Maybe??
Next Muenchen blog : Wednesday 20th July
Posted by fatbusbloke at 02:00