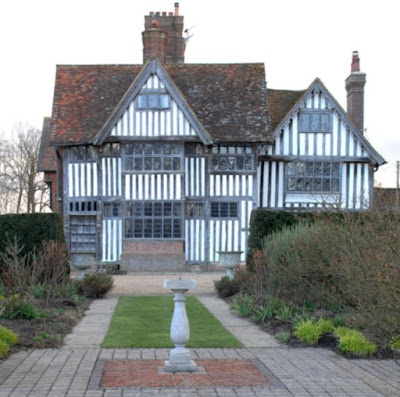 The rather splendid Birchley House, near Biddenden in Kent, used to come with its own delightfully miniature railway which ran right past the fine and historic pile. 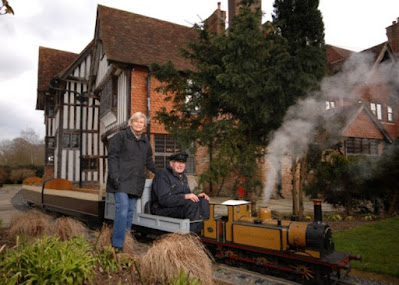 An on-line article, prompted by the offer of house and railway for sale, gives some background. the article has been expurgated by fbb.
In 1968, Jennifer Randall and businessman husband Drummond (photograped in 2013!) ... 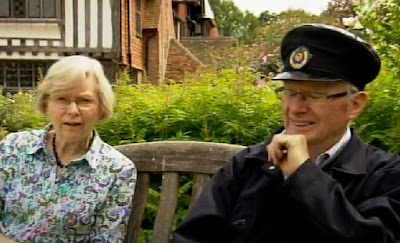 ... and their two toddlers, Edward and Catherine, moved into Birchley House, a run-down 17th Century mansion outside Biddenden, Kent, and started renovation.
Two years later, Drummond moved on to a quite different project.
He decided to build the biggest, most show-stopping, fantasy scale miniature railway in their home’s five-and-a-half acres of grounds.
His idea was to turn into a lifelong obsession and even intended digging a 202ft tunnel to allow his steam engines to pass under the property’s drive.e concentrated on the railway in the grounds. He put down another 200ft of track, and, in 1980, set about his biggest engineering feat – the tunnel under the drive. 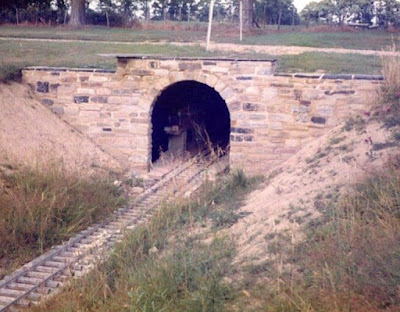 He then looped the track around the front gardens, making a run of a quarter of a mile, before creating an extension into the rear groun ds to make a half-mile circuit in all.
All the while Drummond was also expanding his stock of engines. He now has four – all steam locomotives – in his sidings. He also built a signal box – a perfect replica of the type found on the London, Brighton and South Coast Railway. 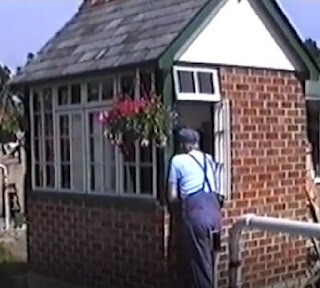 The work inside the house, overseen by Jennifer, was equally substantial.
Birchley is an impressive Grade II mansion, but when the couple bought it for £11,800 it was in dire need of care and attention. During their first winter, the snow would blow in through the holes in the roof. The interior was dark and miserable and the grounds were overgrown.
But now the Randalls are selling Birchley because their children have all flown the nest and the six-bedroom house, with its beautifully landscaped grounds, including a covered swimming pool, is too big for them.
Birchley’s new owner can either buy some engines and keep the line working – or Drummond will be quite happy to dismantle the whole track and take it away.
The article is dated 2013 which ties in with one of the Sunday 4th dates of the "final" open day.
But it seems that the "dismantle and take away" option was what happened.
The line is, indeed, no more; hence the firmly closed front gates. 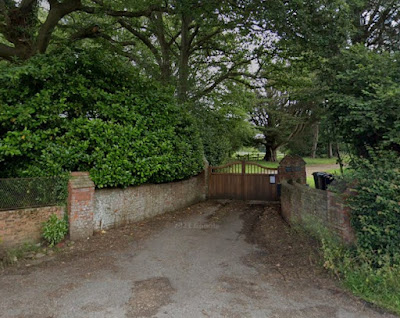 Fortunately, thanks to Google Earth, we can see some of the locations, now bereft of track and trains, that we spotted on yesterday's video. The quality is not great, neither is Google Earth, but you will be able to follow the circuit.
We start at the station ... 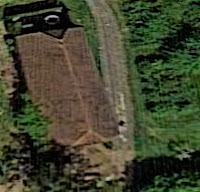 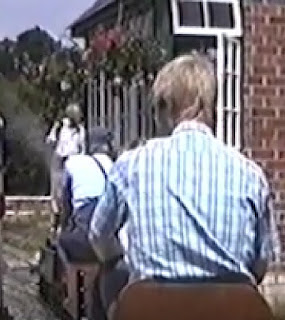 ... the past turntable and engine shed. 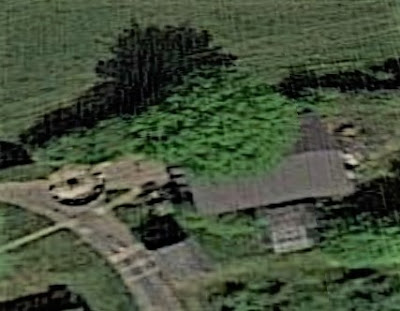 The remnants are clearly visible on Google Earth. The train then passes through a foliage archway ... 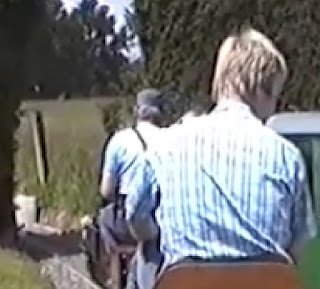 ... and then runs along the boundary fence. 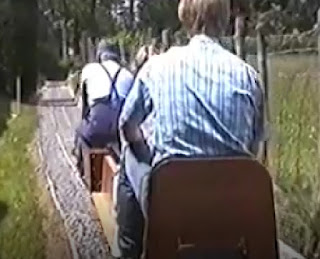 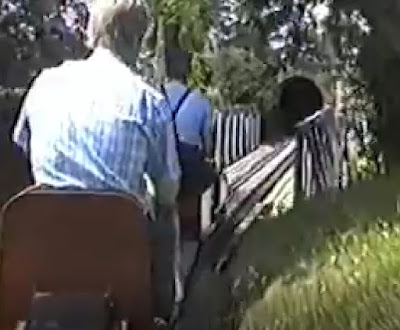 ... and into the famous tunnel. These features are not visible from above due to trees - the bridge may have been removed, - but here it is under construction. 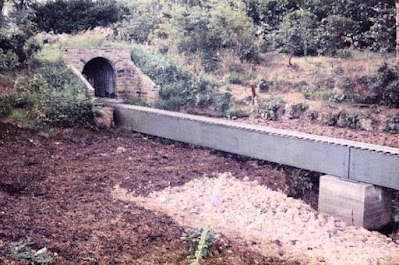 We can, however, spot the exit from the tunnel ... 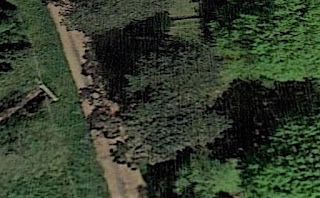 ... just to the left of the drive; after which the line curves gracefully round ... 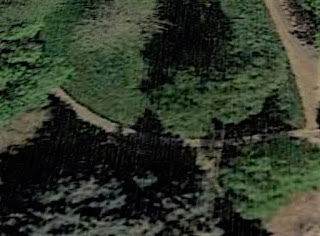 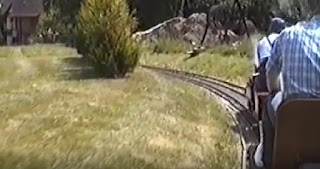 ... to chuff happily past the front of the house. 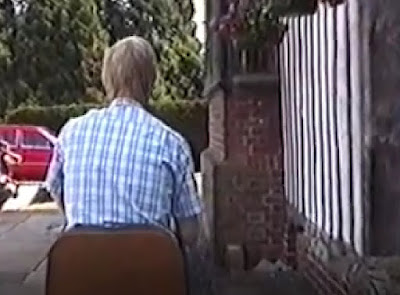 A sharp left hand bend takes us though another hedge ... 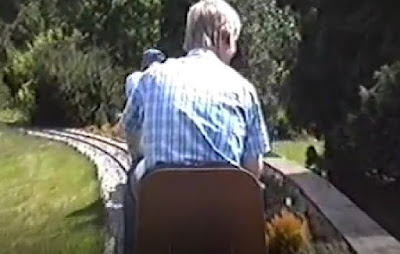 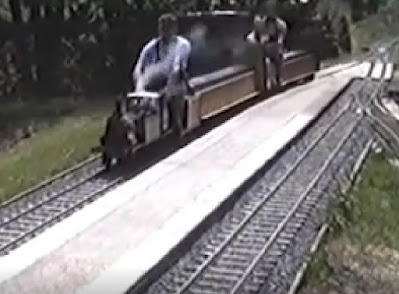 Here is an overview of the site and you should be able to plot the sausage shaped line.

Drummond Randall did not stop there, however, and he built a bit more. There was a junction just after the tunnel, which led to an extra section through the woods (and therefore invisible to Google Earth). 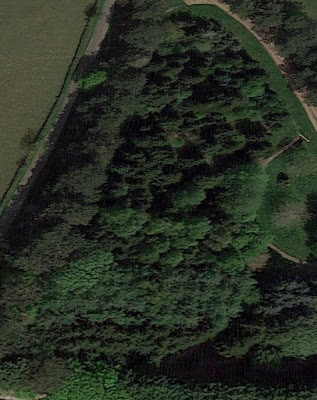 It ran to a terminus near to those firmly-closed main gates and required proper signalling (hence the signal box) ... 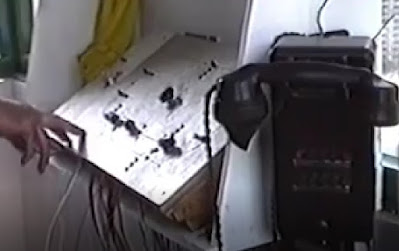 ... and proper single line token operation.
Here we go:- veer right and into the woods ... 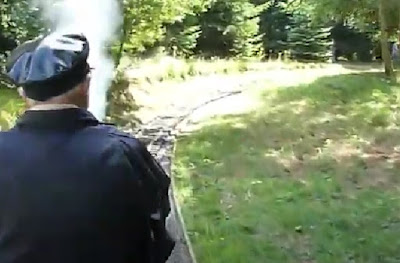 ... alongside the road from Biddenden ... 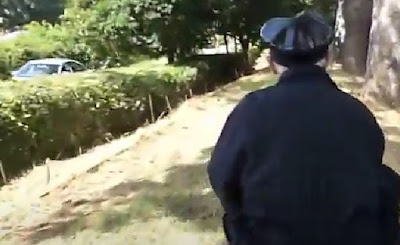 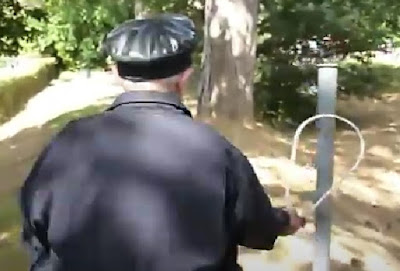 ... past another signal box and in to the terminus. 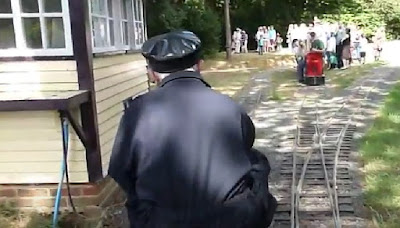 These last four pictures are stills from a video taken on the very last day of operation, August 4th 2013.
The line has been "gone" for over ten years and it's passing was a sadness for many.
The blogs all started with a label in a Seaton antique shop. 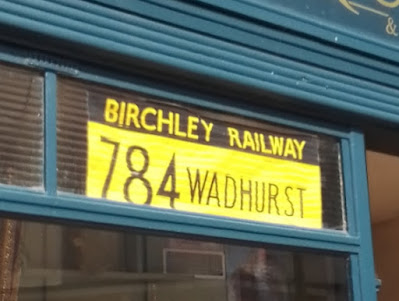 Weird isn't the word!
PLEASE NOTE
More Matford model railway snippets will now follow as part of the Sunday Variety blog.
Talking Of Tail-Chasing Model Railways
fbb has, at last, assembled a simple circular test track which will enable him to do "stuff" more effectively on the dining table - especially in inclement weather.
Seen here is fbb's extension of his tank wagon collection, progressing into the complex world of cylindrical tanks for the transport of cement and other powder products.
Six so far! More to come.
Nexct Variety blog : Sunday 3rd July
Posted by fatbusbloke at 02:00