We are travelling north (ish) on the new T13 tram which runs from Saint-Cyr (near Versailles) to Saint-Germain-en-Laye. For most of its length it uses the track bed of the long closed (68 years closed) Grande Ceinture railway line built to encircle Paris.

We left our trajectory yesterday at Saint Nom, the terminus of Transilien line L 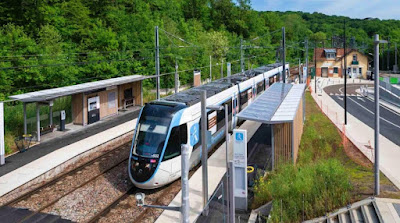 The next stop north, at L'Etang - Les Sables, never was a station on the Grande Ceinture or on the Tangentelle section of Transilien line L. It is just a new tram stop! 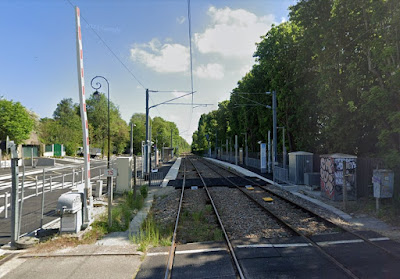 But we soon regain the former stations. 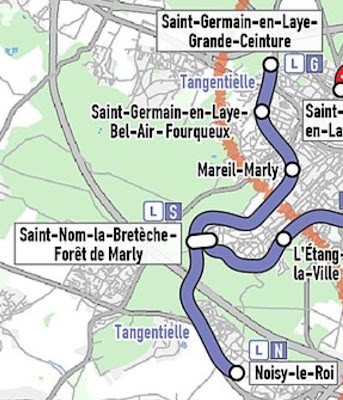 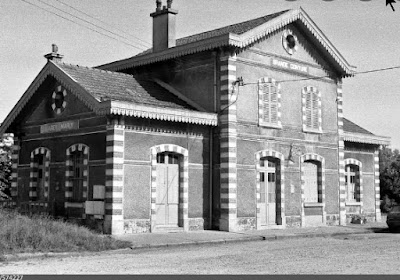 ... which will no longer be used under tramification. 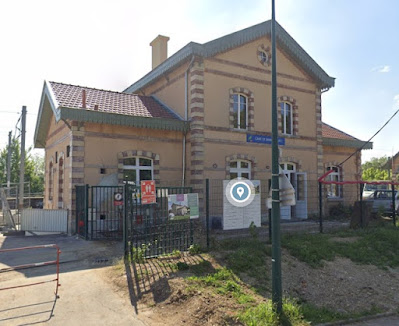 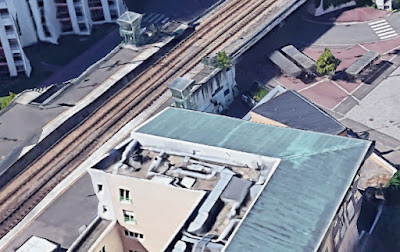 This is really shoe-horned in to the suburbs plonked up on the embankment ... 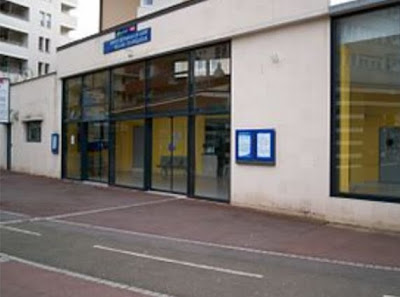 ... leading to the rebuilt Viaduc St Leger that we met yesterday; but there is now a lift ... 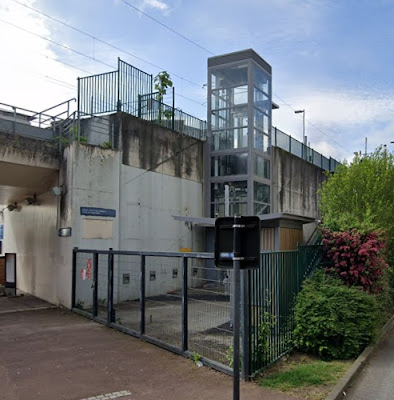 ... to ameliorate the long climb! 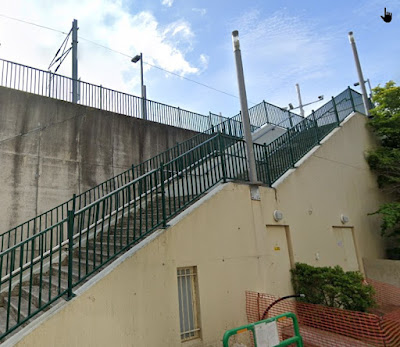 The station name has been changed to lose its Saint Germain tag.  It is now simply (?) Forqueux-Bel-Air. 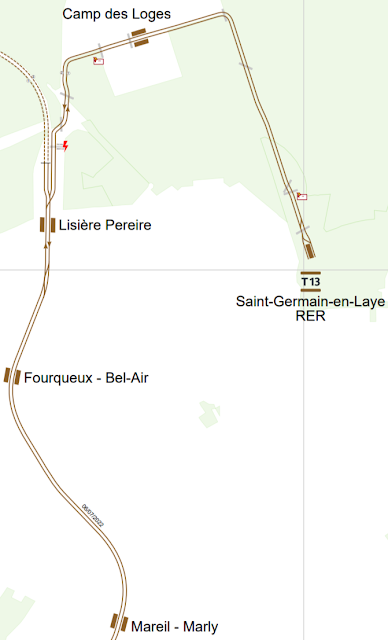 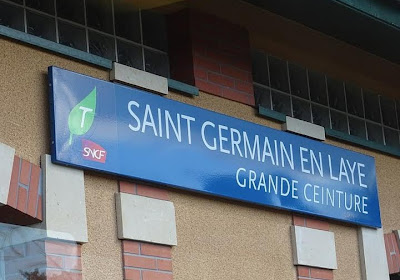 ... is renamed Lisiere Pereire! Confused.com yet again.
But, again, the ancient building remains in good condition. 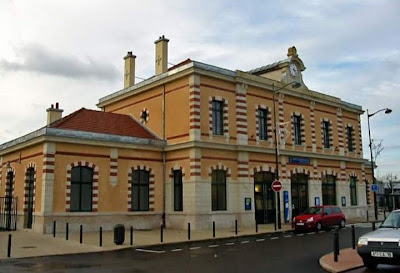 But as you leave here something truly remarkable happens. At the station, we are a train, running on the LEFT using SNCF rules and signalling whilst sucking power from 25Kv overhead - like all "proper" electric trains in France.

North of the station we become a tram running on the RIGHT and sucking a modest 750V from tram overhead. Signals are standard "white lights" drive on sight. It really IS a tram-train - not like the feeble attempt at the genre that cost so much to install in Sheffield.
The corners now become tighter and speeds lower as we follow ordinary roads ... 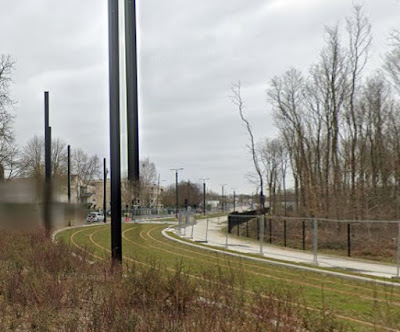 The stop at Camp des Loges was still being built when Streetview visited ... 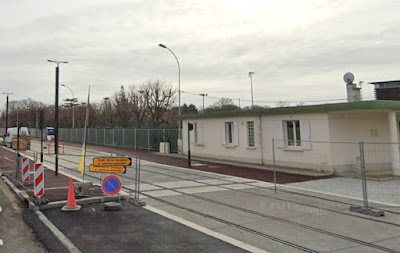 ... but, of course, everything is on reserved track.
The trams then turn south along the Route Des Loges ... 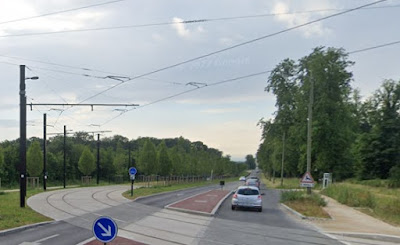 ... before terminating at Saint Germain. This long "Avenue" will take us all the way to the end of the line. 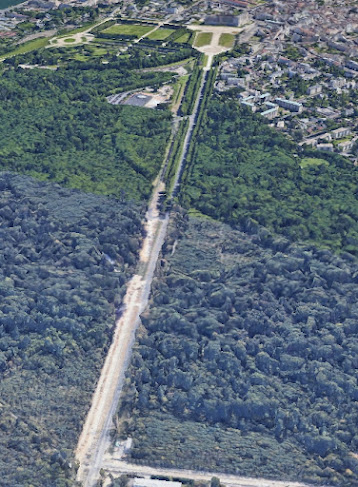 But, if you go down to those woods today, you are sure of a big (hmm, not so big?) surprise! Look at the "crease" that curves through the middle of the afforestation from bottom right to left centre. (Picture below. The different "colours" of the trees are not a fluke if nature, merely the consequence of stitching together different Google Earth images.) 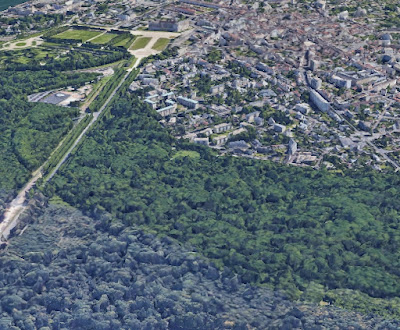 Now point the other way, due north. 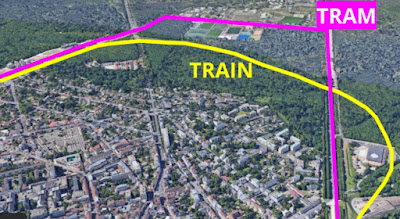 Many years ago, there was a train link from the rather remote Grande Ceinture station round into the centrally located terminus of what became RER line A. Here it is on an old map. 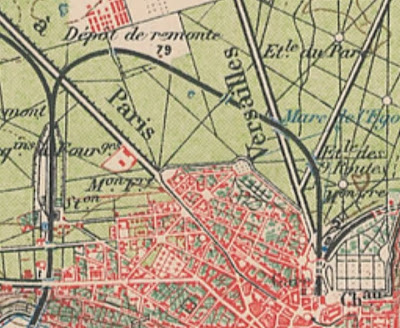 You would presume it closed when passenger services were withdrawn from the Grande Ceinture.
Tomorrow, we conclude this tramway tour-de-force with some screen shots of a video journey en route and a look at the connections available at the Saint German terminus.
Next T13 blog : Friday 29th July
Posted by fatbusbloke at 02:00