Todwick (near Rotherham) has a shop ... 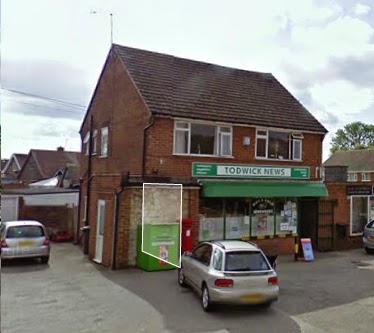 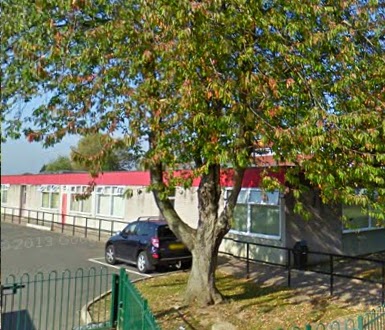 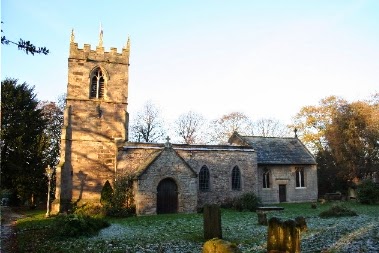 And for most of the post WW2 period it had an hourly bus into Sheffield ... 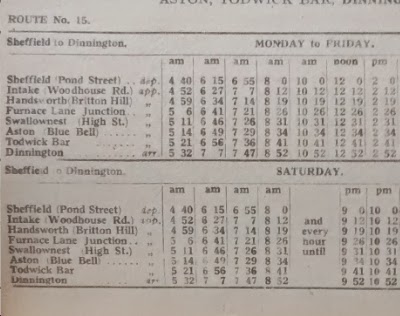 ... originally available by walking to the Toll Bar (service 15) but later diverted via the village (service 215). The village has grown from the 1960s onwards but because it is not on any major through route its bus service has suffered considerable turmoil in the last 25 years. It lost its remaining connection with the former mining town of Dinnington in July of this year which provoked much of the protest revealed in yesterdays journalistically erroneous blog. (read again) The 27** might have been OK for trips to Dinnington ... 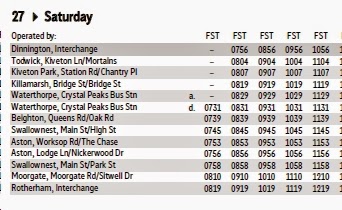 ... but at 1 hour and 15 minutes to Rotherham, including a tour via Crystal Peaks, would not have been the journey of choice.

But Todwick has much more cause to be disgruntled with the rest of the changes brought about as part of the Rotherhan Bus Partnership.

Yesterday fbb stated quite categorically that the village still has an hourly bus service to Rotherham and similar to Sheffield. But, according to Travel South Yorkshires [TSY] poor publicity, this is not quite as true as one might like.

Service 29 refers to Todwick on its leaflet cover ... 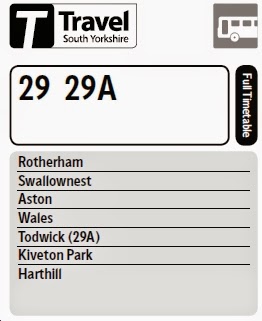 Some evening journeys numbered 29A do, however. 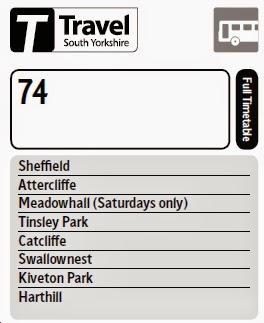 ... which doesn't mention Todwick on the cover, does go there.

It has an hourly service to and from Sheffield; but not direct like the historic 15/215. It tootles round an estate at Aston (Aughton Lane), visits the former pit village of Treeton ... 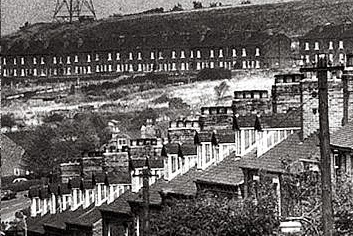 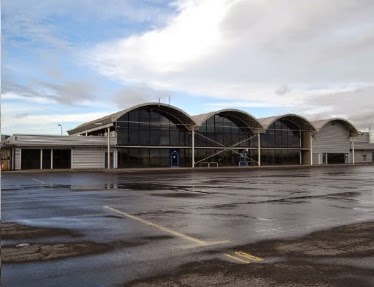 ... and even (on Saturdays only) the experiential richness of Meadowhell shopping centre. 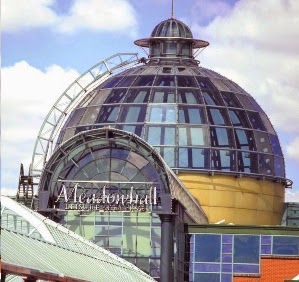 It takes 50 minutes; the 215, not the quickest route into the city, took 40 minutes. The map shows that the 74 route is well-blessed with wiggles! 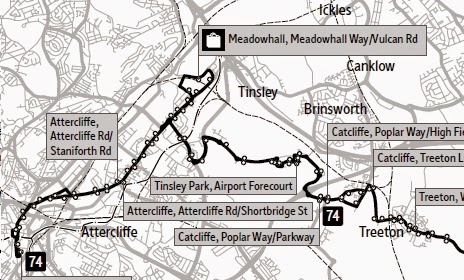 So, it would appear that the poor Towickians are not only deprived of a service to Dinnington, but they must must tarry longer omnibus-bound to Sheffield and no longer have a route to Rotherham.

But hold fast there. Service 74s leave Harthill at 40 minutes past the hour but arrive at 49 minutes past.

Likewise the service 29 arrives at Harthill at 36 minutes past the hour but leaves on the hour.

Surely the 29 doesn't stand there for 24 minutes. Now there is a clue in the 29 timetable.

Notes: A - From Harthill bus continues to Todwick and shows service number 74.

But there is no such clue on the 74. Surely it should say something like "continues via Wales and Swallownest to Rotherham". The note on the 29 should say "continues to Todwick and Sheffield" as service 74.

So here's the proper timetable; from Rotherham via Harthill and Todwick to Sheffield ... 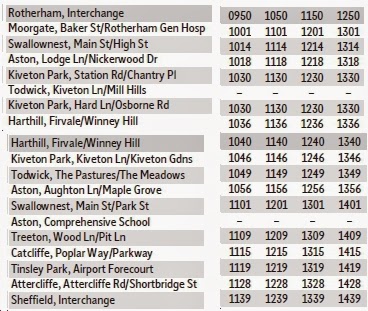 ... and from Sheffield to Rotherham ditto. 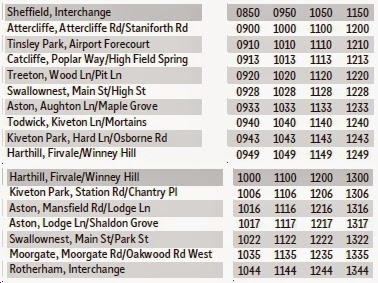 Todwick to Rotherham running time, one hour (plus)! That's a bit slow, to say the least; a previous service (also numbered 29) took only 40 minutes but the 27 took 1 hour and 15. The good folk of Todwick have just cause to protest that they have, for a long times, been treated as an annoying inconvenience by Frst Bus and the PTE.

But an fbb map, will, as usual, explain the current complexity. 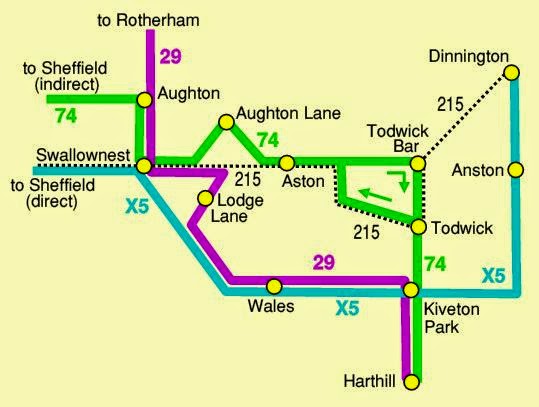 Purple 29 becomes green 74 at Harthill and vice versa. Is the official TSY map more helpful than those in the timetable leaflets? Here is leaflet map 29 ... 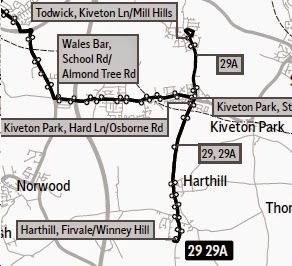 ... showing only the evening 29As to Todwick; no mention of the daytime link to 74. And the 74 leaflet map makes no reference to its link with the 29. Just plain unhelpful. 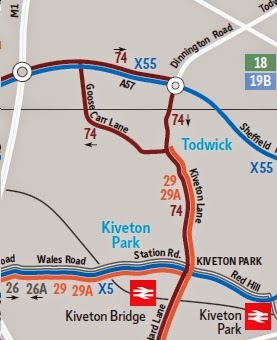 ... but implies that there are three services on Kiveton Lane when there is only one bus each hour in both directions.

First Bus on-line tables are just as bad, Their version of the 29 does, at least, show times for Todwick on the 29 rather than just the PTE's note but, again, not a sausage on the 74 table. To add to the possible confusion, the 29 is shown on the same table as the revised 27 - messier again! As First is not involved in the evening 29A variant, surely showing the whole caboodle as a through service, as per the fbb paste-up above, would make the best sense of a poor product?

To complete the picture, fbb has added to the map the long-gone historic 215 and the current "main line" X5 which doesn't serve Todwick. Back in the good old days the main route from Sheffield to Dinnington was the 206/219. It ran just once an hour plus peak extras.

The 207 was a latecomer extra which diverted at North Anston to serve the village of Woodsetts.

The modern X5, by contrast, runs every 20 minutes Monday to Friday, every 30 on Saturdays, has a faster route into the city and is thus 10 minutes quicker. 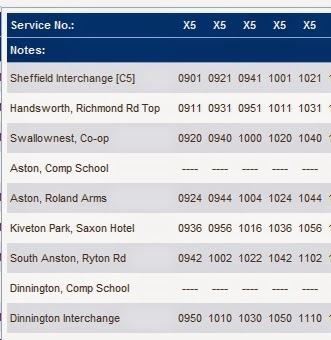 So we clearly see the business ethic of the modern bus company. Push resources into trunk routes that make the most money (the X5) and use clever scheduling and routeing to get the best return possible out of the less profitable corridors (29/74). A subsidiary and less understandable aim appears to be to make the resultant "mop-up" timetable so baffling that joe public has no idea where the buses go.

**27 leaflet. This was the service withdrawn in July; fbb received a copy yesterday afternoon - too late for yesterday's blog.