The Adventures of Rupert Street [2]

One of Bristol’s biggest eyesores could be in line for a facelift if a planning application is given the go-ahead by the city council. The scheme which would see a revamp of the Nelson Street area of the city centre would also see several unsightly concrete bridges demolished. 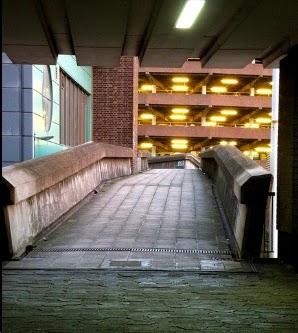 The aim is to demolish the ugly concrete building which was the former home of Bridewell Police Station and replace it with brand new student flats and shops. 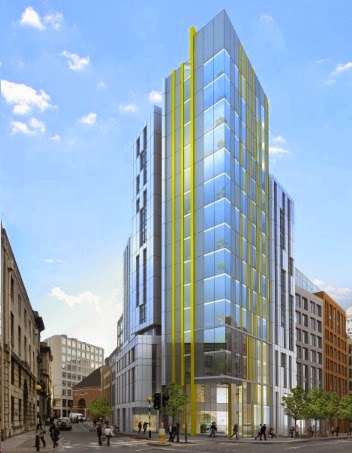 The scheme also includes a public square, shops and bars and is the third time developers have looked at improving the area.

So the footbridge has to go. At 2130 on Friday, Rupert Street was closed and will remain so until 0630 tomorrow morning. But Rupert Street is an important bus route. 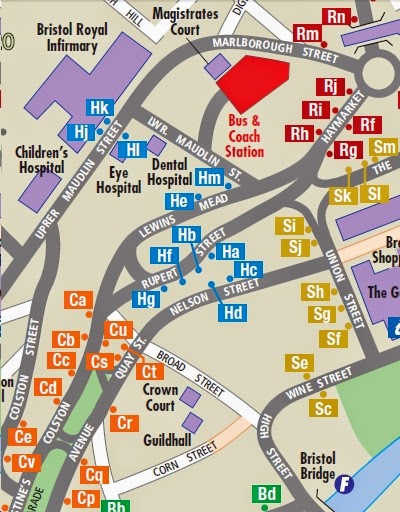 Vast numbers of buses are prevented from getting roughly southbound to the main terminal stops on Colston Avenue (etc.) at what is called "The Centre" but takes its name from "The Tramways Centre", the point at which all tram routes came together. Stops Ha, Hb, Hf and Hg cannot be served. 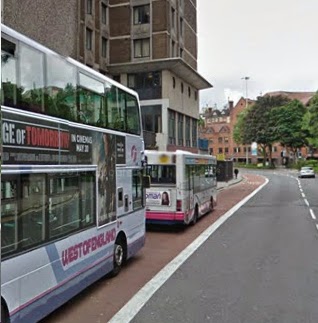 Bit it's more complex than that. Because of the loss of Rupert Street and during the closure, Quay Street and Nelson Street, normally one way north east bound, will reverse direction and become one way south west bound.

This means that stops Cs, Ct, Hc and Hd cannot be served.

So First Bus has had a big big problem this weekend. 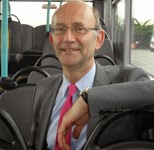 Paul Matthews, Managing Director, First West of England, says: “We would like to offer our sincere apologies to anyone whose journey by bus this weekend is affected by this road closure. We don’t have any direct control over the closure, but we have been working closely with the council to try and mitigate the effect of it. We are also doing our best to communicate as widely as possible regarding what is happening and why. Our overriding message is simple though: if you are travelling to an important event or appointment this weekend, which involves travel in or around Bristol,please allow extra time for your journeys. Those with access to Twitter may also find it useful to follow our feed if they want to access the latest information about services in the city.”

It would be tedious in the extreme to attempt to explain the whole gamut of diversions that First have put in place. But we can surmise much from some generalities. Buses that would use Rupert Street, for example, divert via New Bridewell Street ... 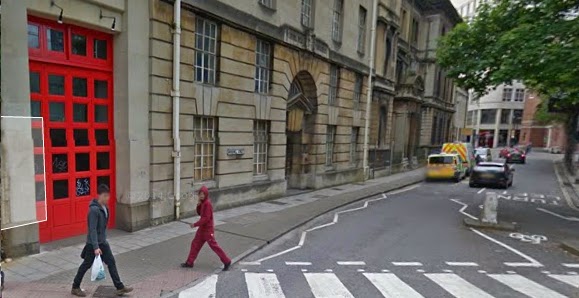 ... Nelson Street (one way but in the opposite direction) and the delightfully named Christmas Street ... 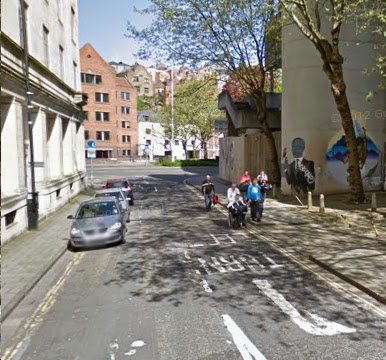 ... to rejoin Rupert Street after the blockage; as here with service 6 and 6A. 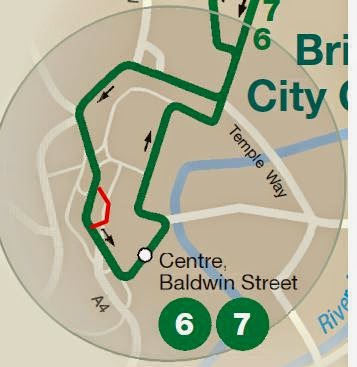 A similar wiggle solves Route 1 and 2 in one direction ... 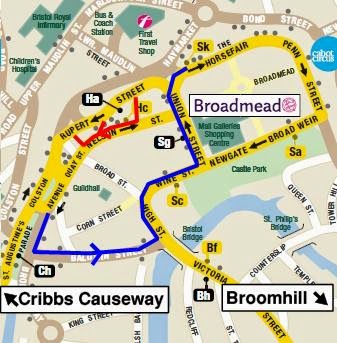 ... but with a massive diversion towards Broomhill added to an already circuitous loop via Broadmead.

Service 5 terminates at "The Centre" but on its very edge at Lewins Mead parallel with Rupert Street. Buses will need to do an extra and larger loopy manouevre to get the their stand. 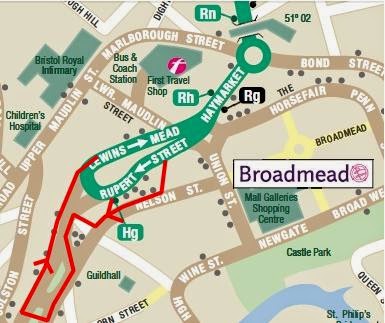 Country buses travelling south from the bus station have been given two options. Either the Nelson Street shuffle or a longer detour via Upper Maudlin Street. 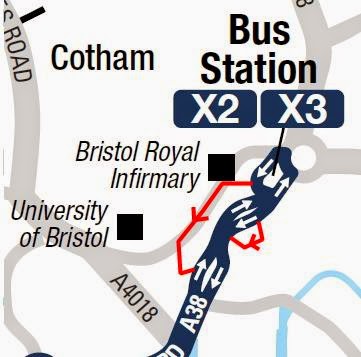 As young Mr Matthews has stated, the big problem was likely to be traffic congestion and the confusion caused by the reversal of Nelson Street's one way restriction. By the time this blog appears we shall know the worst. fbb will report later if things have been particularly exciting!

Everything seems well covered on-line. But fbb does not know about the quality of information at the non-served bus stops or what sort of printed details will have been made available.

It could have been a big shock and frustration to the vast majority of Bristolian bus travellers who would never dream of "going on-line"; even if they had the skills, the knowledge and the confuser available!

Apart from First Bus web site, various local on-line "news" services report the general situation but with no detail. Travelwest, a joint information service for the area, could only manage a map of the diversion for Rupert Street itself. 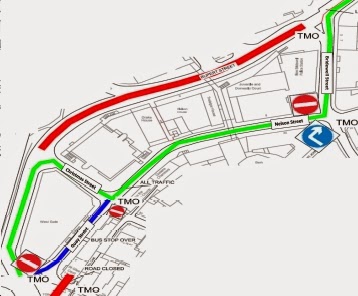 Traveline South West had a scrolling heading,
For details of alternative stopping arrangements please visit:
linking to a web site with a long name which includes Rupert Street ...
www.atobsw.com/RupertStreetRoadClosureBusDiversionInfo25092014.pdf

... but with no mention of where Rupert Street is! This linked to a decidedly user-UNfriendly list with no maps. 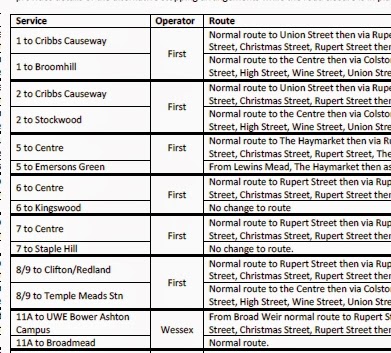 Comprehensive but incomprehensible. There was nothing obvious at all on the Wessex Bus web site.

Yesterday's Bristol Post published a list of routes affected and some pictures of the work in progress. 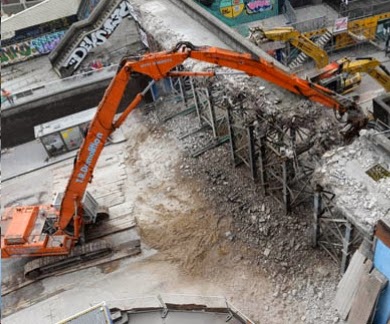 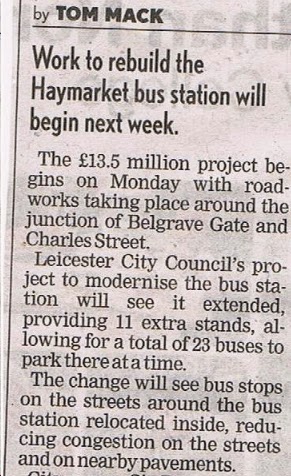 The old facility, tired and inadequate ... 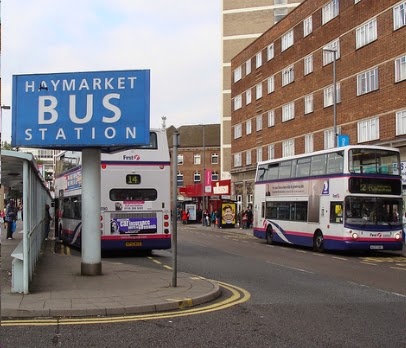 ... will be rebuilt with "sawtooth" stands designed to accommodate all (more?) services. 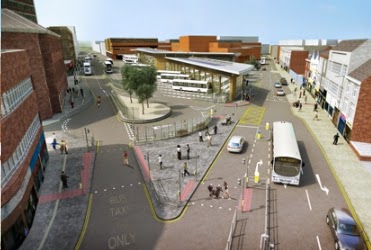 As its name suggests, the bus station never was on Haymarket. Charles Street is on the left and Belgrave Road (with the main entrance) on the right. 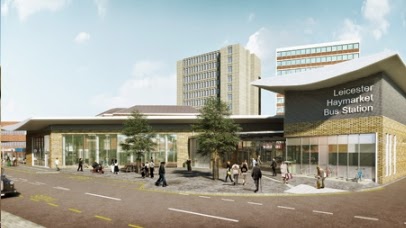 Some observers have suggested that there isn't enough space for passengers and not enough stands for the buses that are scheduled to use it. Now that sounds very familiar; but we will have to wait a while to see how it all works. Opening is scheduled for late 2015.