Three Options for a Funeral [3] 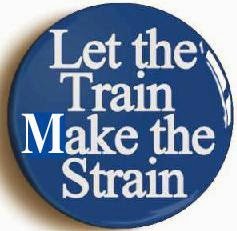 a modern "take" on the old slogan?

fbb's Leicester chum, David, is weighing up the options for travelling by public transport or car from his home in Groby to a funeral in Maidstone, at Vinters Park Crematorium. In yesterday's blog, fbb has discovered that a viable option is a train to Maidstone East, then bus 506 which stops outside the station.

It is reasonable to assume that a local resident can cope with the journey from home to Leicester station, although, to coin a phrase, it ain't easy! So network rail's journey planner can surely get us to Maidstone for about 1130 with plenty of time to make it to the Crem for a 1230 kick-off? 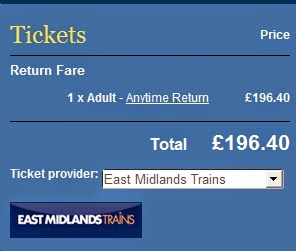 Does the route you choose matter. And what are these routes? 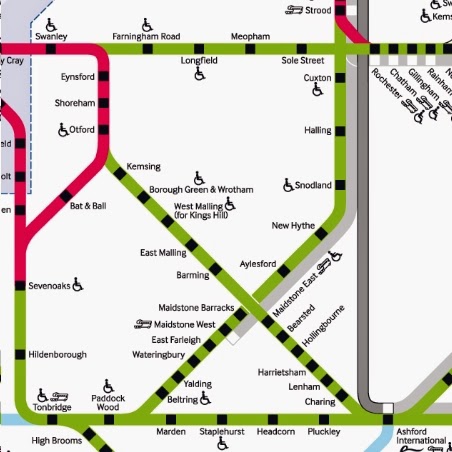 Yesterday's researches suggest that we want Maidstone East which has a train every half an hour from London Victoria ... 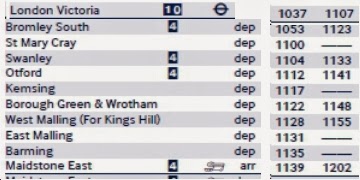 ... taking a little over OR a little under an hour depending on stopping pattern. An arrival at 1139 would connect with a suitable 506 bus with plenty of time; the next arrival at 1202 would be just about OK; but tight. Getting across London is a quick nip by Victoria Line underground, so also OK.

But getting to Maidstone West has a huge advantage. 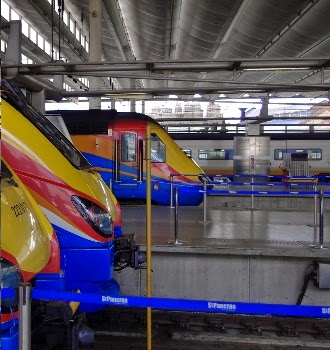 The journey starts off from St Pancras, arrival point of the train from Leicester, so no crossing London, just a sedate trot from the Western side of St Piecrust to the Eastern side ... 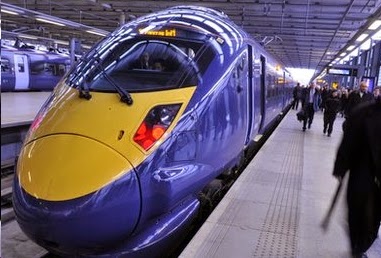 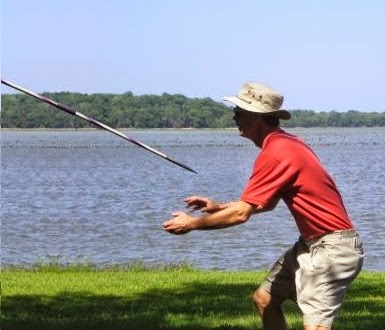 Again, there is a half hour service and the 1127 arrival would be a doddle with the 1157 being just about OK. Note "b" tells us that a change at Strood is necessary; only 4 minutes but an advertised connection.

But if we don't want to pay nearly £200 for the privilege, things become a bit more challenging.

Now here fbb sinks into near insanity. The ramifictions of off peak, advance, return and single fare calculations become mind bogglingly and insanely complex. Not only that, but they appear to change every time the frustrated potential passenger looks them up on-line. It's enough to make a grown man cry; and often does.

Here are a few of the fare options. 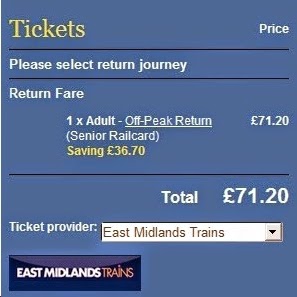 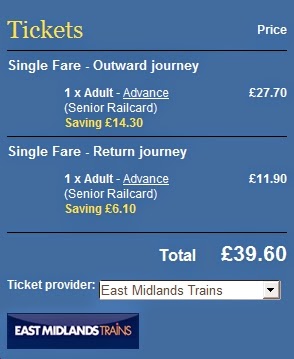 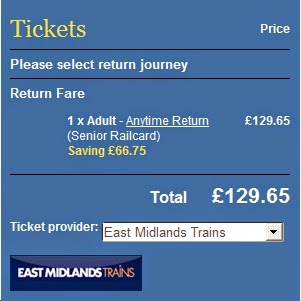 Oddly, funerals are not usually planned well in advance, so the middle option (£39.60) is not likely to be available. But which fare you might actually pay is a calculation just too complex for a normal mind to work out. It is too complex to make any sense whatsoever. But two possible journeys may be available at a "reasonable price". 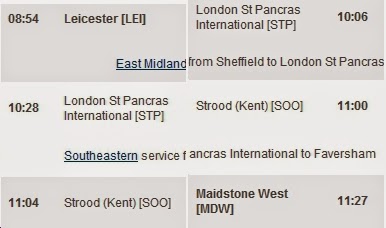 0854 change at St Pancras and Strood; arriving at Maidstone West with plenty of time for the bus. Alternatively the journey planners offer something which fbb has not considered. 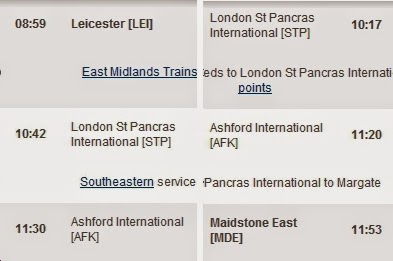 A Javelin, but going the other way; and a change at Ashford! Now there's a novelty and a novelty well worth considering. 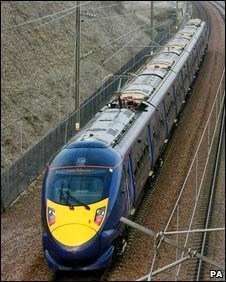 But the arrival is, as fbb has already said, a bit tight.


What the journey planners don't tell you, or, more correctly show you, is this:- 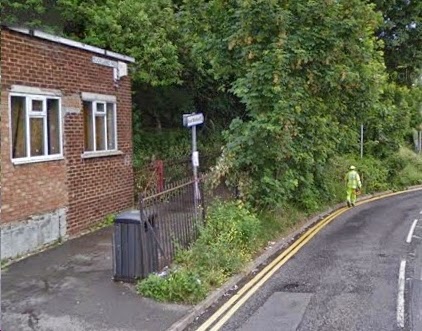 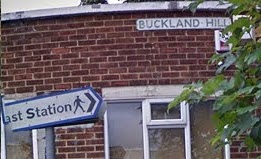 'Tis none other than a footpath to Maidstone East Station. "But from where?", we hear you cry.

So, IS THIS THE ANSWER?

Instead of alighting at Maidstone West Station, you get off at the previous stop, Maidstone Barracks station. 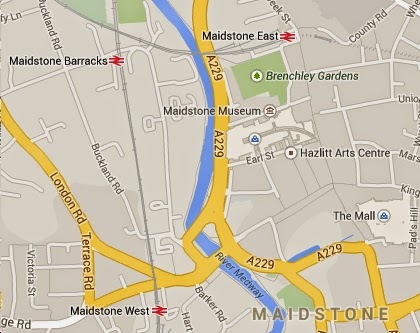 Leave the station, turn tight and walk down Buckland Hill, take the well hidden footpath, cross the river Medway and the A229 and, sooner than you think, you will be at Maidstone East and your 506 Park & Ride bus stop!

But chum David (he's going to the funeral, remember) should book to Maidstone West. Because the baked meats are at Flaxman Road Allington. In fact, David did not know this before making his decision, but could have asked; funeral "hosts" are never very good at giving out instructions, understandably being over-burdened with the emotions of the occasion. Assuming someone kindly gives David a lift from Crem to nosh, all he has to do, after socialising, is to walk the short distance to London Road ... 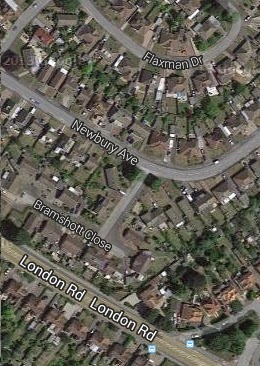 ... catch any one of many frequent bus services to Rocky Hill for Maidstone West station and, as they say, use outward route reversed. 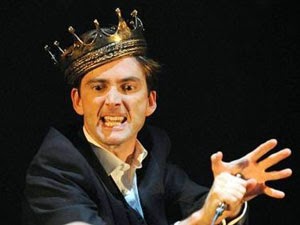 
For in that sleep on train, what dream may come,
When we have suffered on this trip by rail,
Must give us pause. There's the challenge
That makes Calamity of so long a trip:
For who would bear the Whips and Scorns of fares,
Journey planner's wrongs, the proud man's Contumely**,
The pangs of interchange time, the train’s delay,
The confusion of Offers, and the Fears
That patient merit of the unworthy takes,
When he himself might his Quietus make
And simply choose to take the car?

And yes, chum David went by car - and who could blame him? Our railway system is becoming too complicated, too challenging for the average passenger to understand. The fares system is, in the minds of the "ordinary" member of the public, simply a lottery. How many potential off-peak passengers are now so confused that they don't even consider the train?

and who could blame them?

And the best that Google Transit can offer for a "reasonable" arrival. 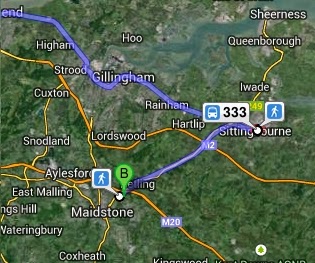 Then Javelin to Sittingbourne and tedious bus to Vinters Park estate. Best not to ask about Groby to Leicester Station!

Next bus blog : Thursday 4th Sptember
Posted by fatbusbloke at 02:00