April Fools' Day produced the usual collection of semi-plausible and far fetched scam news items, none of which came close to the delights of the best ever, the Panorama "Spaghetti Harvest" gag from 1957 (which fbb remembers watching a mere 56 years ago!)
One picture sent to fbb was more amusing than most. 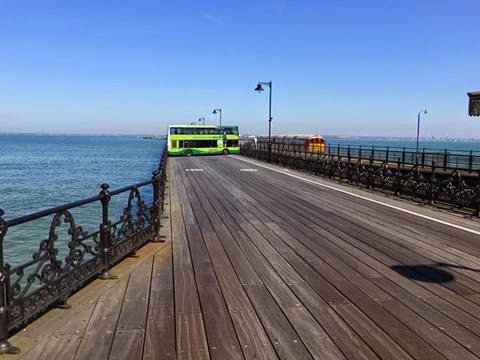 Bus bloggers were also "at it" with converted prison vans on rural services in Cornwall and a rejuvenation of the Leyland National in China. All good fun of course. There were also those who doubted the veracity of fbb's raport on the Severn Tunnel visitor centre; although why anyone should disbelieve the writings of a dedicated serious commentator on transport matters is unclear!

But the best comment on the day's "activities" was provided in a letter to the "i" newpaper, which had carried a rather weak news item about the introduction of a 30 pence piece. Here is that letter. 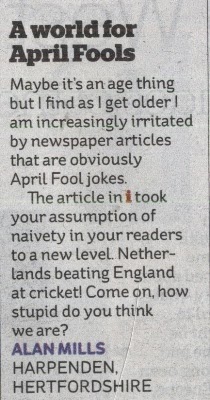 For those who do not follow the all-pervading excitement of leather on willow, England's cricket team was, indeed, humiliated beyond measure in a defeat by the Netherlands.

Meanwhile, in York, this news broke on April 1st.

There is quite a lot to read in his expurgated version of the news story that broke last Tuesday, April 1st. But it is worth spending the time!

The Government's traffic adjudicator has ruled that the scheme could not be "sensibly" described as a bus lane, meaning City of York Council has "no power to issue a penalty charge notice". The council has said the restrictions will remain in place and drivers should continue to obey them, despite the judgement, as it seeks "independent legal advice". 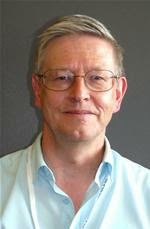 Coun Dave Merrett, the cabinet member for transport, said "I am obviously very perturbed at the adjudicator's decision. We will clearly need to look at it very carefully and I will need to get legal and officers' advice to make the appropriate response."

A decision on whether the bridge trial should continue is due to be made by the Labour cabinet next month, but the adjudicator's report throws its future into doubt. 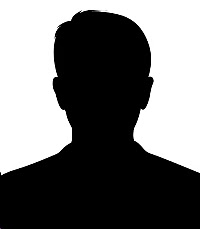 Adjudicator Stephen Knapp, who visited York in February to assess the schemes, ruled on the single case of a driver fined for using Coppergate (also part of the scheme) last August and stated that because 14 exemptions apply on that street and 21 are in place on Lendal Bridge, the roads could not be classed as a bus lane.

It said: "In my judgement, notwithstanding the designation in the traffic order, neither Coppergate nor Lendal Bridge can sensibly be described as a bus lane, street or gate, but rather the roads are part of a general traffic scheme from which non-exempt vehicles are restricted at certain times and where buses are just one of the excepted categories or classes of vehicle. Clearly the council has power to impose those restrictions, but because Schedule 7 of the Traffic Management Act has not been fully implemented, civil enforcement does not apply and there is no power to issue a penalty charge notice [PCN]."

The council has made at least £1.3 million in income from fines; the list below from Lendal Bridge alone ... 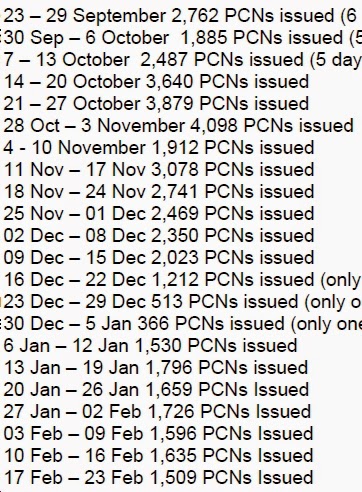 ... and has said between £650,000 and £750,000 of this would be ringfenced for transport schemes once the costs of the trial are deducted. More than 53,000 drivers, the majority of them being visitors to the city, were issued with PCNs during the official six-month span of the trial, which ended on February 27.

Darren Richardson, the council's director of city and environmental services, said: "We will be speaking to the Department for Transport, who approved signage used for both schemes. 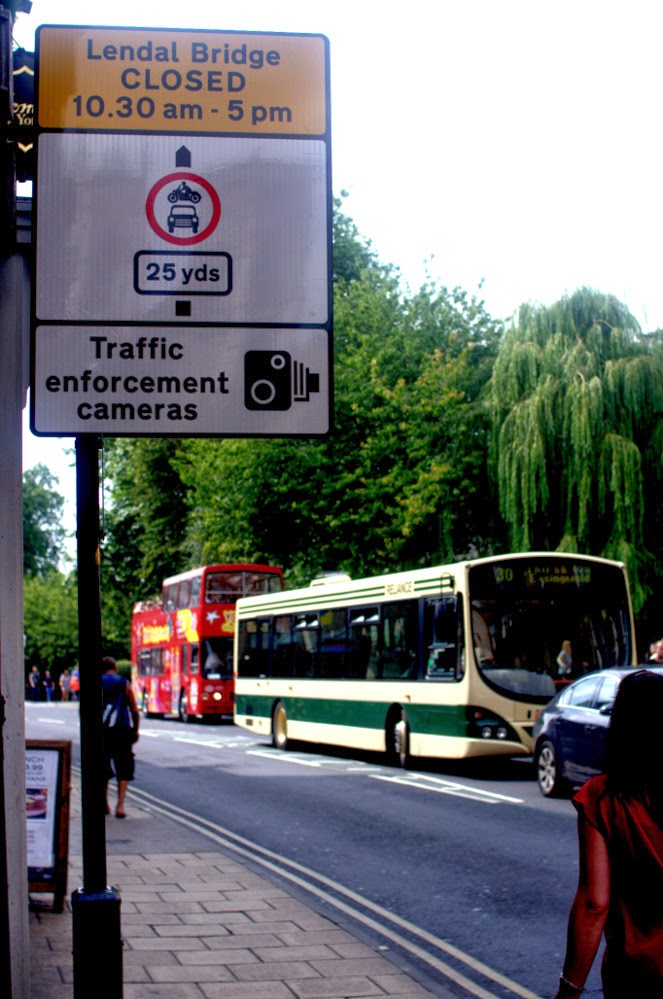 no mention of buses

We know that a number of councils nationally will be concerned about this decision and the implications this may have in their area.” 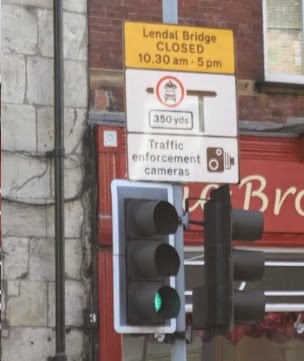 no mention of buses

In his ruling, Mr Knapp said he was cancelling the fine imposed on the driver who appealed against the decision, Nigel Rhodes. He said there was an "inherent ambiguity" in the signs advising drivers of the Lendal Bridge restrictions, because the direction sign did not include the times of the closure."The impression is therefore that the two restrictions were entirely separate, the first being a closure of Lendal Bridge, without a reference to a bus or general traffic restriction, and the second a prohibition of motor vehicles at all times," 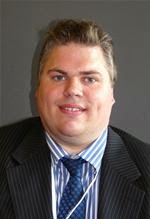 Conservative group leader Coun Chris Steward said: "For those of us familiar with the farcical saga, it is entirely predictable given the poor signage, misleading 'restricted access' ... 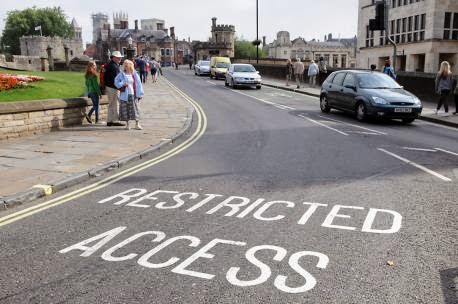 ... and the lack of information on where Lendal Bridge even is. For the good of York, I reiterate my group's call for the bridge to be reopened. However, even those who support the trial closure realise it has been handled diabolically, and it is time for Coun Merrett to resign from the cabinet." 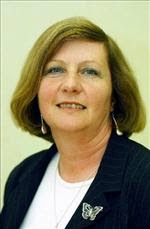 Liberal Democrat transport spokeswoman Coun Ann Reid said: “This ruling proves what an utter fiasco Labour’s decision to close Lendal Bridge has become. If I was somebody who had received a fine, I would be demanding my money back. The ruling supports our concerns that the closure signs were not clear and using words like ‘Restricted Access’ is misleading. It also confirms that often the only way for drivers to avoid the closure is to do a dangerous u-turn on a narrow road. This has been a botched closure from start to finish. It has made congestion worse, increased overall bus times, and done reputational damage to York.

fbb' personal observations back in September 2013 would wholeheartedly refute Councillor Reid's last statement. There was no apparent increase in congestion in the City although congestion is always bad. Buses were obviously running more freely over the bridge but "normal" hold-ups elsewhere meant that the overall improvement in reliability was not as huge as might be desired.

The signs are awful! So much so that he AA has posted additional warnings. 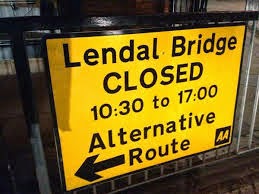 Unfortunately many visitors to the City will not know what or where Lendal Bridge is, and by the time they find out,  there is no easy escape. It would have been better to put up "No Through Road" or even "City Centre closed to through traffic" signs well in advance of the restriction.

Sadly, this was not an April 1st joke, but a sad reflection on a badly planned and badly executed scheme which really ought to have been made successful. Lendal Bridge is so much better with much reduced traffic.


Next bus blog : Monday 7th April
Posted by fatbusbloke at 02:00