fbb is baring his all (horrid!); revealing the secret workings of his agile and productive brain (derision snorting is allowable!) as he tackles the problem of drawing some route diagrams for Chalkwell buses in Sittingbourne. Yesterday, geography was explored (read again); today complex timetables are unravelled - hopefully.

The spreadsheet shows 344s from Bredgar and Borden to Conyer ... 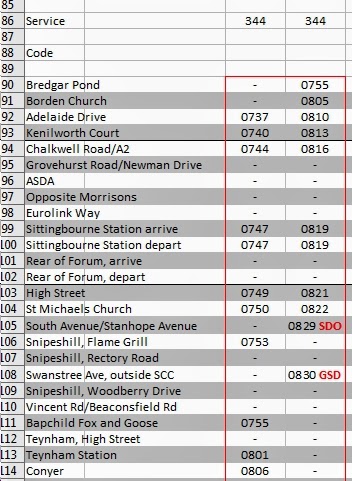 ... enclosed in a red box which, being interpreted, means tendered by Kent County Council. There is a 345 to Doddington and Newnham ... 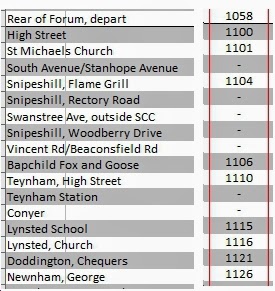 ... likewise red boxed. In many ways these 344s and 345s are remarkably similar to Arriva 344s and 345s extracted from the Great Britain Bus Timetable of over 15 years ago. 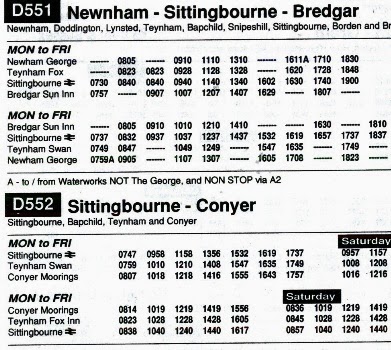 But most of the journeys on the timetable are numbered 7 or 8 ... 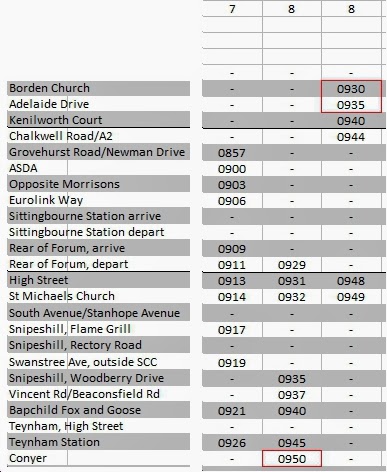 ... and only have boxes round the end bits. This means that most of these journeys are commercially operated with nary a shiny penny from the coffers of Kent. What has happened, then, is just about obvious. (?). Chalkwell have extended some of their commercial journeys on route 8 to cover previously tendered journeys on service 344 and 345. 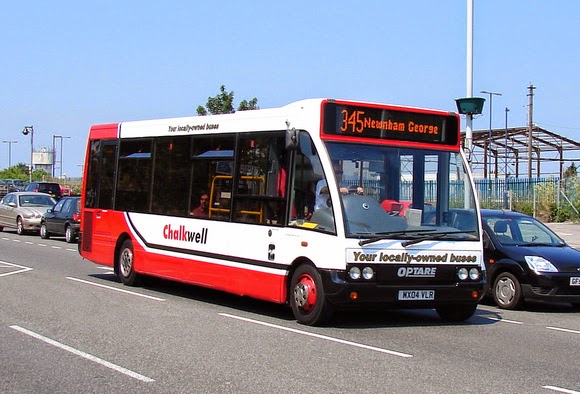 These "commercial trips plus" run off-peak Mondays to Fridays leaving peak hour trips as fully tendered and still with their "traditional" route numbers.

This is, roughly, what the "Route One" article hinted at; but left the detail to the readers' imagination!

Are you will awake at the back? If so, well done! 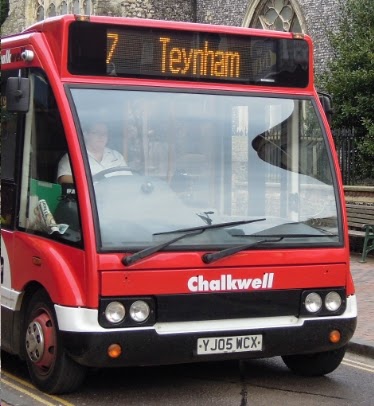 This means, for example, that as Jason, Anthea and young Torquil look for a bus to Conyer to check on their schooner (very likely!) moored in the Marina, they might be looking for a service 8, 344 or 345 and they would need to avoid a service 7 which only goes as far as Teynham Station. 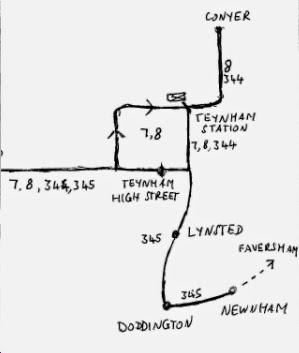 And we are back to the sketch map supplied by Kentish Klive which instigated fbb's investigations.

Except on Saturdays! On Saturdays there are no 7s or 8s when the whole service is supported by the Council and numbered 344 and 345! 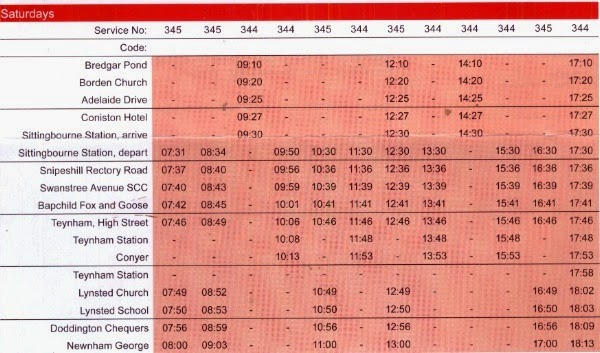 In the printed version, pink shading replaces the red outlines on the original spreadsheet.

By now, fbb has done his homework and, hopefully, understands what is happening from April 7th. All that remains (!) is to create a "map of the mess" which is as helpful as possible to the beleaguered travelling public. 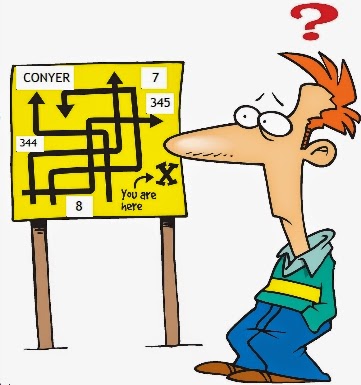 Now before Chalkwell management cancel payment, fbb must state that calling this network a "mess" is no reflection on the company. Indeed they have made every effort to maintain services to the villages under constant local authority pressure for financial savings. In other areas, some of these communities would simply lose their service altogether. But the "mess" does illustrate, yet again, the limitations of the UK's mix of commercial and tendered funding and the growing problem caused by a reduction of monies available for commercially unviable routes. In France these services would either ALL be there as part of a tendered Sittingbourne network ...

... OR there would be nothing outside of the main interurban links.

fbb is sure you would all like to see his "solution" to the conundrum. So here it is, an extract from one of the four maps now in use on Chalkwell leaflets:- 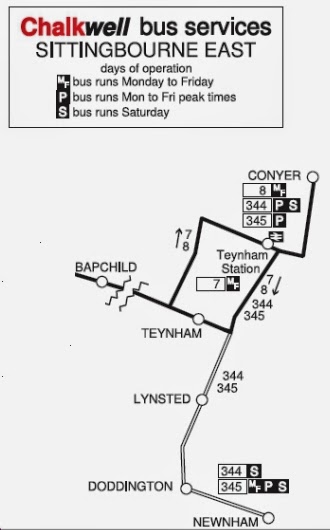 Chalkwell commercial services 7, 8 and (on other maps) 9 & 9A are shown as solid lines. Rural services, still numbered in the historic 300 series, are shown as "cased" (hollow) lines. A code is added to terminal points to suggest which route numbers to look out for at different times and on different days. There are no Sunday services.

Obviously the maps have to be read in conjunction with the timetables.

Some readers may disagree with fbb's solution (inevitable, as graphics are often subjective in their effectiveness) but the project has shown two important principles. Firstly, a considerable amount of thought needs to be exercised to deliver something truly helpful; pressing the "go" button on a confuser is rarely good enough. Secondly, to reuse an fbb mantra, "you can either be comprehensive or comprehensible but never both." When presenting a complex timetable someone has to decide what the "essence" of the service should be and design information accordingly.

Chalkwell are to be congratulated on a set of four high-quality leaflets which have been designed to make a complex network as easy as possible to understand. 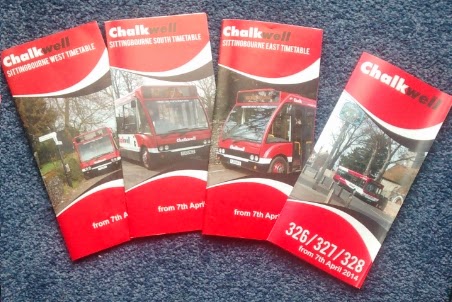 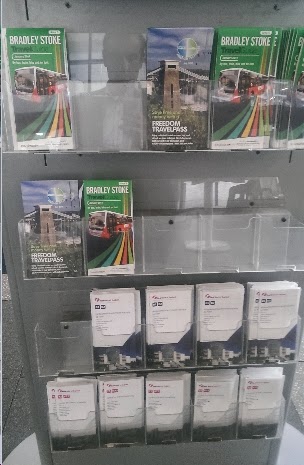 Both out-of-date service 18 leaflets have been removed. Well done, folks. Now try even harder and get some of the correct and current service 18 leaflets in the rack. You've managed it with the 81, 82, 73 & X73. Mummy will give you a shiny penny if you get it right! 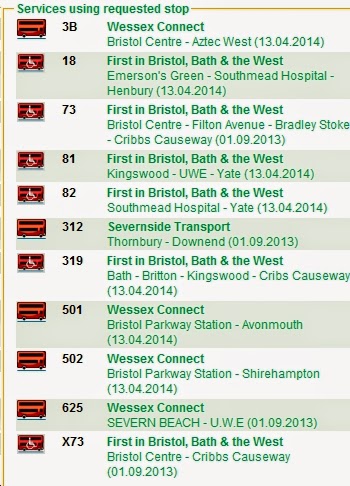 But they're not run by First; so it doesn't matter! And while you're at it, the Bradley Stoke Travel Guide ... 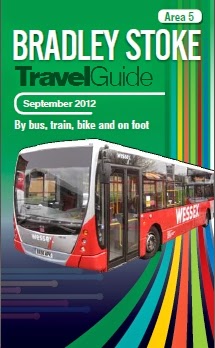 Thanks to Paul for the photographic update.