fbb had intended to publish this blog later on in May, but a comment on "Improve the Service : Make it More Complex [2]" (read again) encouraged a touch of "bringing forward". Service changes herein discussed start on Sunday 25th May.

["thinks" similarly, methinks] So, the answer, of course, is:- not very long at all!

A package of "improvements" to the X53 and its associated service 31 has been announced in the excellent Weymouth area timetable book. 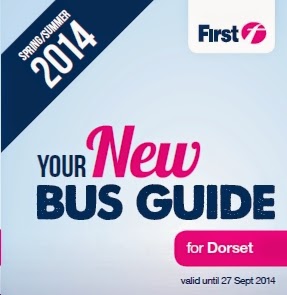 An advertorial panel hints at the changes ... 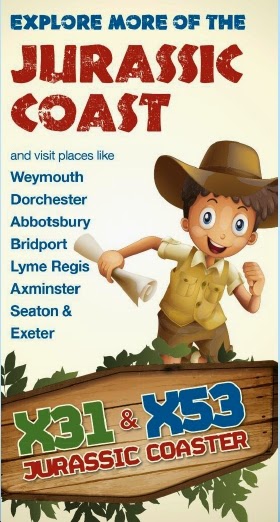 ... by bringing the former 31 into the "refreshed" Jurassic Coaster Brand as X31. The present 31 has become very unreliable of late and has often failed in one of its advertised purposes, namely to give a rail link from Axminster to Lyme Regis and from Dorchester South to Bridport. fbb reported on atrocious late running last Summer. 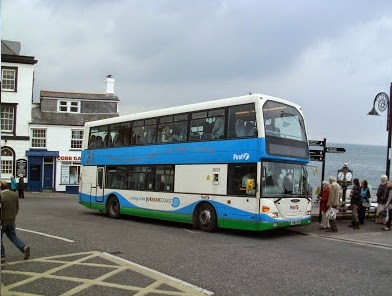 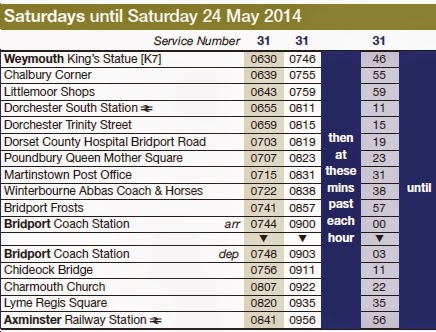 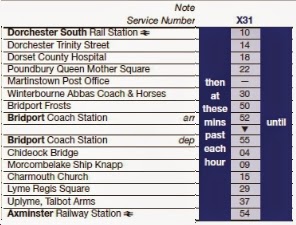 ... and will no longer run to and from Weymouth. What the blurb does not say is that daytime buses (with a couple of peak hour exceptions) will not run via Matrinstown ... 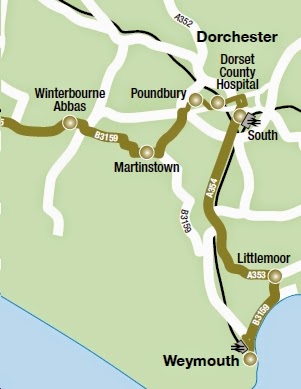 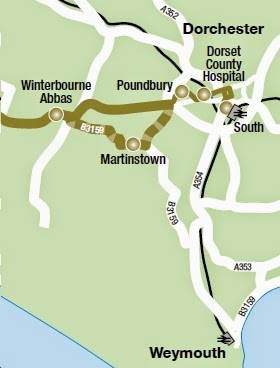 From an hourly service to very little seems a bit of a downer for the regular bus-riding Martinstowner.

A petition is already underway. This from Andy Canning's local blog:-

First Bus Group have recently announced plans to withdraw their hourly bus service from Martinstown and Winterbourne Steepleton and run the 31 service along the A35 instead. First Bus are proposing just one early service to Dorchester for workers and one return at the end of the afternoon.

This will cause real problems for local residents who don’t have access to a car and need to get into town for shopping or medical appointments. Please sign and return my petition which I am delivering to every house in both villages. If we can get a really big response I hope we can change First’s decision. I will also be pressing First to come to a local Public Meeting so they can hear first-hand the problems this change will cause. 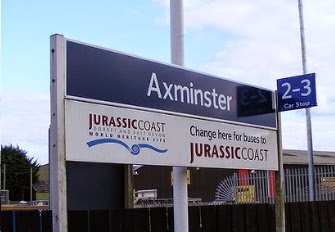 X31 timings at Dorchester South and Axminster stations are similar to the previous offering, so it remains to be seen whether the unreliability problem has been tackled by these "improvements".

So what about the X53? Presently this offers a splendid run between Poole and Exeter every two hours. 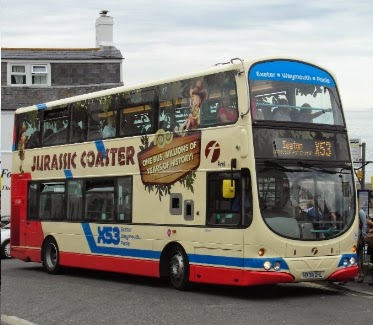 Last year the vehicles gained a new branding for what has become a fully commercial service ... 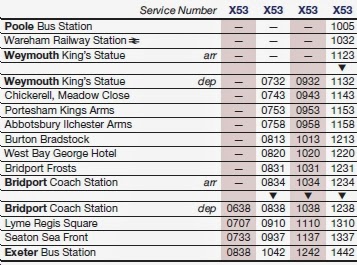 ... once supported by Dorset and Devon Councils. It, too has an "improved" timetable Over part of the route the frequency is "upped" to hourly ... 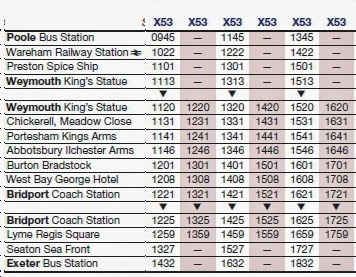 ... namely over the busiest section between Weymouth and Lyme Regis. fbb is not yet sure how buses will turn in Lyme; let's hope that First's planners have worked it out! But in the other direction ... 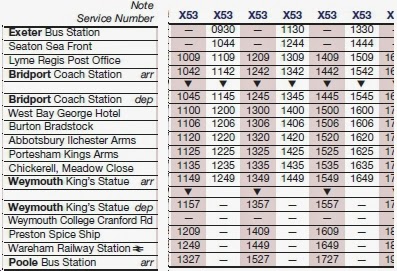 ... the through route is severed. This means that passengers from west of Lyme Regis seeking to enjoy the whole run eastwards beyond Weymouth will have an hour's wait somewhere along the middle section. This makes such journeys far less attractive and may be confusing for interepid travellers attempting a return journey.

But look at Bridport to Lyme Regis! An X31/X53 bus every 30 minutes (approx) must be the best frequency there has ever been.

So, as with the Stagecoach route 700 blogs last week, there are winners and losers in these enhanced services. Three rousing cheers for First in their attempts to do some positive things, but a word or two of caution. Will customers be lost (for ever?) as a result of the disadvantages? 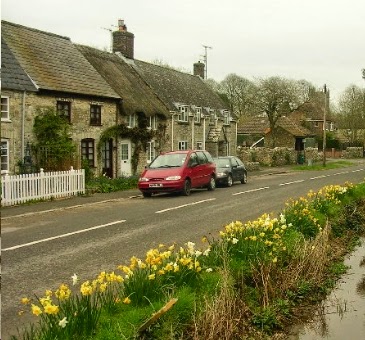 fbb doesn't see much hope for the Martinstown petition considering the other needs of the revised X31. Maybe the villagers will also decide to settle on one name for their community. Its historic title is Winterbourne St Martin. 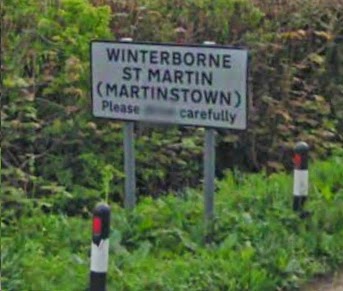 Today is the day when nothing happened! 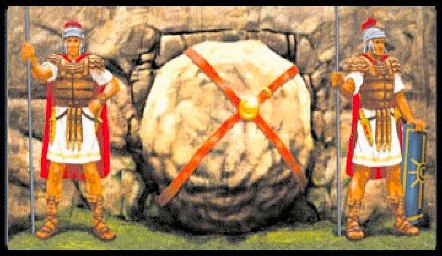 To avoid breaking Sabbath Rules (Jewish Sabbath is Saturday which starts at sunset on Friday), the body was hurriedly removed from the cross and taken to a borrowed tomb by arrangement with the Roman Authorities. The tomb was sealed and guarded, just in case.

In case of what?

The people were still marvelling at everything Jesus was doing, when he said to his disciples, “Don't forget what I am about to tell you! The Son of Man is going to be handed over to the power of human beings.” But the disciples did not know what this meant; they could not understand it, and they were afraid to ask him about the matter.

He also told them, “The Son of Man must suffer much and be rejected by the elders, the chief priests, and the teachers of the Law. He will be put to death, but three days later he will be raised to life.”

No serious reader would deny the existence of Jesus [although a few "fruitcakes" might!] ... 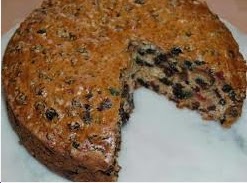 ... the evidence for his life and work is far stronger than that that for any other historical figure of the time; stronger even then many more recent big hitters. Bill Bryson's excellent book on his playwright namesake reminds us how little we know for certain about Shakespeare ...

... far less than we know for certain about Yeshua bar Yusuf, the historical Jesus. But the real challenge begins on that Sabbath Saturday evening, or overnight, with another thought provoking incident.

Why did highly trained guards, armed and responsible for their entombed body with their lives on the line, simply run away?