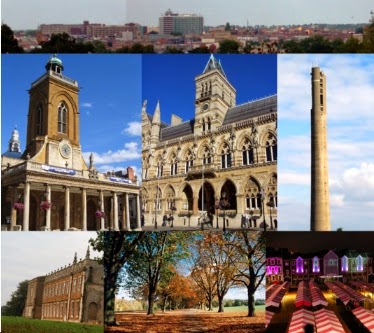 It has a poor bus station but a good network of bus services run almost exclusively by Stagecoach.

Rennes (Brittany, France) has a similar population and a good bus network operated by Keolis. 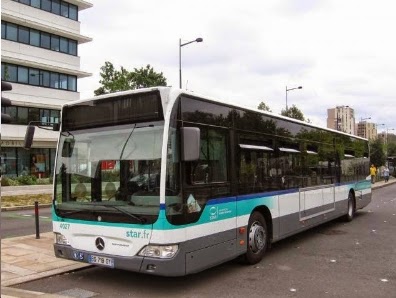 For once, the livery is uninspiring, lacking the usual French "panache", but the brand is nattily titled "Star". 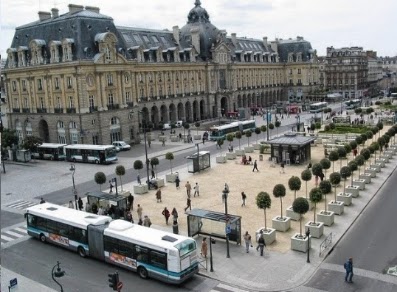 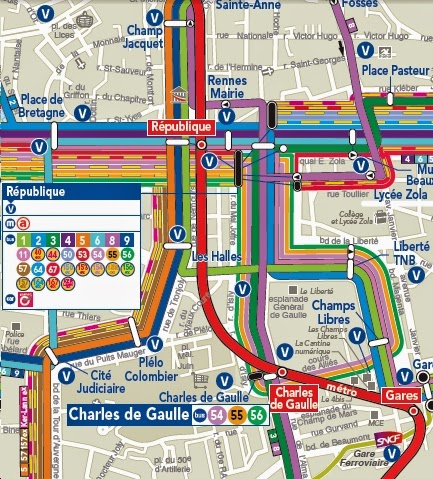 ... leaving Illenoo's rural and interurban services to depart from the bus station, not the most beautiful of facilities. 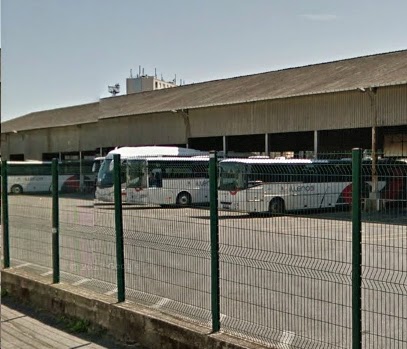 But it is close to the Railway station - much more picturesque ... 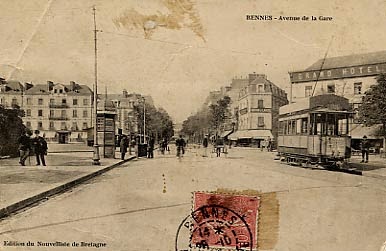 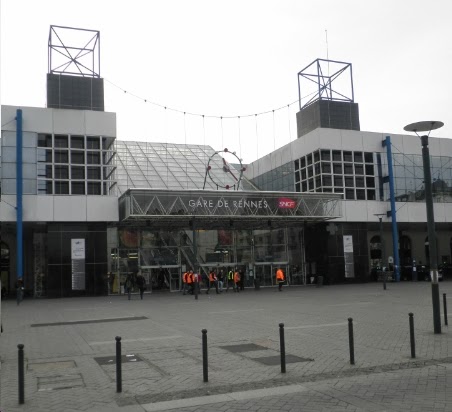 Up to this point, the communities are vaguely similar. But there is one huge, public transport difference. Northampton does not have an underground railway ...


Opened on 15 March 2002, the metro in Rennes is based on the Siemens Transportation Systems VAL (véhicule automatique léger or light automatic vehicle) technology**. There is one line, the 9.4-km Line A, which runs north-west to south-east from J.F. Kennedy to La Poterie via Gare de Rennes (served by Gares metro station), with fifteen stations, thirteen of which are underground. Stations are equipped with platform screen doors. 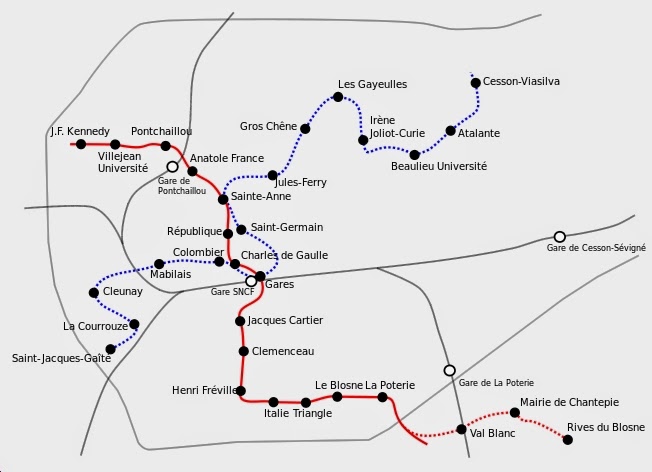 Line B (blue dots) is planned, authorised and building will start soon; likewise an extension to Line A (red dots) is in an advanced stage of planning.

Services run between 0520 and 0040 each day (except Thursday, Friday and Saturday night between 0520 and 0135), and with a waiting time of approximately 80 seconds between trains. From end to end, it takes around 16 minutes, with an average train speed of 32 km/h. All stations are equipped with lifts.The system has 30 trains, each weighing 28 tonnes and 26 metres long, with a capacity of 158 passengers (50 sitting and 108 standing).

There is a spectacular open air section (above diagram, bottom centre) with an amazing terminal station at La Poterie. 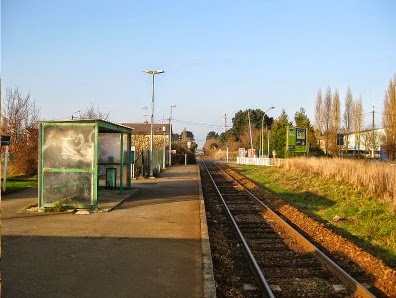 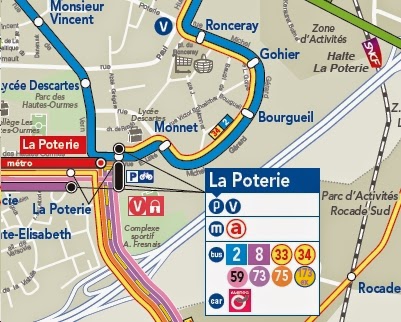 The Metro terminus looks quite different ... 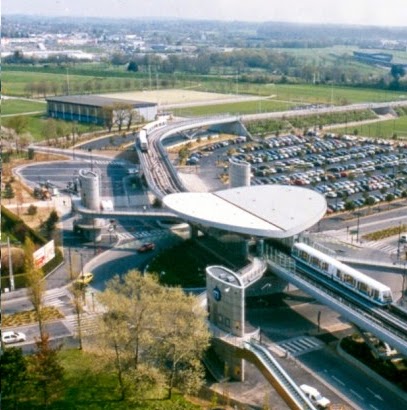 ... and was designed by Sir Norman Foster. (Perhaps assisted by some of his lads and lasses?) It features a bus interchange with park and ride and looks spiffing at night. 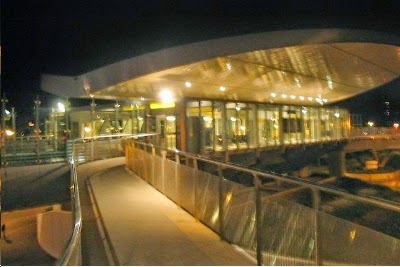 Amazingly, fbb has visited Rennes. Well, not quite; but has passed through. As a spotty teenager he was privileged to accompany his dad on a trip to set up deals to import fruit and veg. This involved visits to Amsterdam, Rotterdam, Brussels, Paris (briefly overnight) and Brest. Somewhere in the domestic coal measures is a photo album from this mini-tour. To get to Brest the train (then from Paris Montparnasse) travelled via Rennes and St Brieuc. Luncheon was, memorably served on the train; a very exciting gastronomic experience experience for the youth.

Things a very different now and the area is well worth a visit. 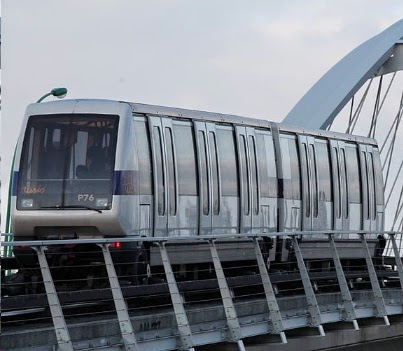 **VAL : VAL is a type of automatic rubber-tyred people mover technology, based on an invention by Professor Robert Gabillard (Université Lille Nord de France). It was designed in the early 1980s  for the then new metro system in Lille. The acronym was originally for Villeneuve d'Ascq à Lille (Villeneuve d'Ascq to Lille), the route of the first line to be projected (and inaugurated). It now officially stands for Véhicule Automatique Léger (automatic light vehicle). In contrast to some other driverless metro systems like the Docklands Light Railway or Vancouver's SkyTrain, the VAL design uses platforms that are separated from the track by a glass partition, to prevent waiting passengers from straying or falling onto the track.
---------------------------------------------------------
4 of 9 Easter Oddities
Cursing the fig tree was a parable-picture of the failure of the old-style Jewish religion; the "tree" of Israel would not bear fruit. The temple clear-out gave the same message; Religion had replaced God! Then there was a story Jesus told about a vineyard. 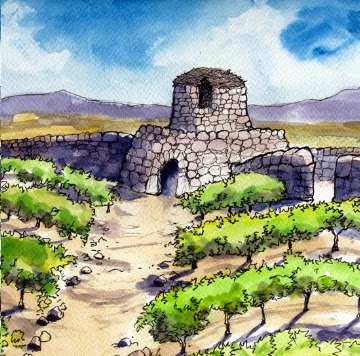 Another picture of the nation of in which the "workers" (Jews) failed to give the "owner" (God) his rightful place and dues. The parable ends with the vineyard being taken away and given to others. All three, although truthful in practice at that time, were provocative and confrontational.


The people were still marvelling at everything Jesus was doing, when he said to his disciples, “Don't forget what I am about to tell you! The Son of Man is going to be handed over to the power of human beings.” But the disciples did not know what this meant. As the time drew near when Jesus would be taken up to heaven, he made up his mind and set out on his way to Jerusalem.