fbb Forgot to Send a Card 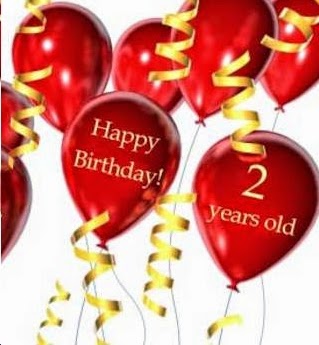 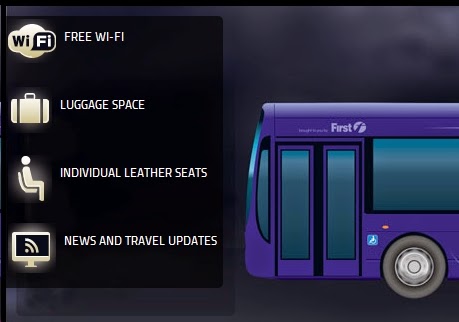 South East Hampshire Bus Rapid Transit is a 2.8 miles (4.5 km) unguided busway between Gosport and Fareham, Hampshire, sponsored by Hampshire County Council using the route of the former Gosport to Fareham railway line to reduce congestion on the parallel A32 between the towns. The scheme was proposed following the collapse of the light rail scheme using the same route and funding was approved in July 2009 for the £20m scheme. The route opened on 22 April 2012 with services provided by First Hampshire & Dorset using specially branded "Eclipse" buses on all routes utilising the busway. 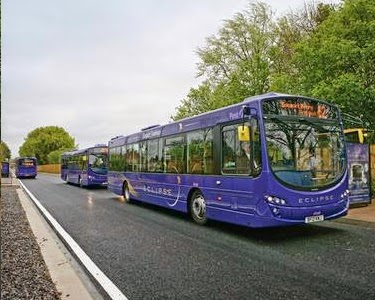 In October last year the daytime Monday to Saturday frequemcy was increased from every 15 on each of the two Eclipse routes to every 12.

Eclipse isn’t just any bus service – it’s a whole new way of travelling. The luxurious Eclipse buses have large leather seats, on-board Wi-Fi, news updates and next-stop announcements. With built-in bus priority, fast, reliable journey times between Fareham and Gosport are assured. And from 6 October (2013) the combined frequency of Eclipse E1 and E2 services increased to every six minutes during the daytime, Monday to Saturday – making it even easier to plan your day around Eclipse.

Then fbb gets an e-mail "circular", not from First, but from Hampshire County Council:-

The Eclipse website (www.eclipsebus.co.uk) has been updated to reflect current progress on improvements to bus services on the Eclipse routes . You will find latest news on schemes nearing completion and those underway for the A27 Western Way and those due to start shortly including 13 bus stop upgrade improvements in Gosport.

Needless to say the link didn't work**, but eventually the page was found via First's web site. A click on "news" ... ... tells us about 13 new bus stops which aren't new bus stops. One complaint with Eclipse was that the busway had all the bells and whistles but, once back in the real world of older Gosport, it was plain old-fashined "flag" and pole and not much else. But work has started to improve some of them. 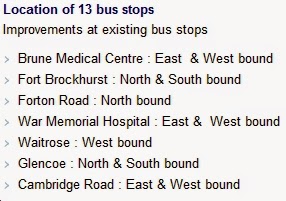 What do you get for your money? 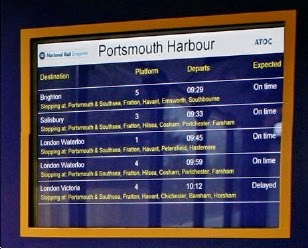 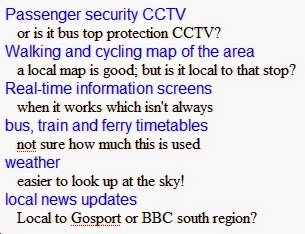 Plus "bus kerbs, special tactile signs on the shelters to guide where to get on the bus and an aural mode to the screens activated by a RNIB React system fob."

RNIB React is a talking sign system that enables blind or partially sighted people to be more independent when out and about. The system works by using a trigger fob. 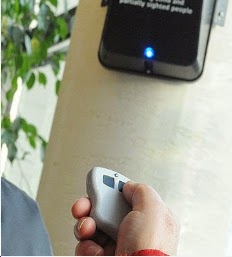 This fob may be carried in the user's hand, pocket or bag. When switched on, it automatically sets off messages as the user approaches speaker units along their route. Using controls on the trigger fob, they can also get more detailed messages.

So much better than a "pole and flag".

Confirmation and correction : the maps are, indeed, "local" for each individual stop as here at Waitrose in Gosport. 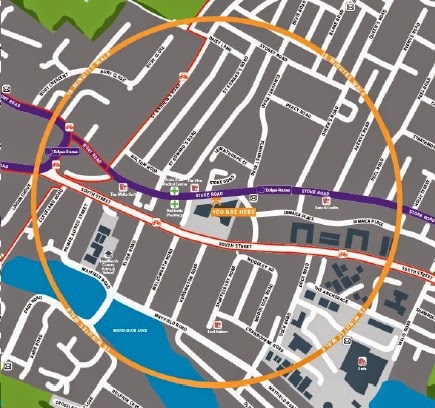 Overall, then, some useful betterment plus a few toys that are dubious in their value.

The next news item is more interesting because it refers to improvements in the unfrastructure aiming to speed up Eclipse journeys in Fareham centre. Hitherto, buses have left the bus station (top left) and wiggled to Quay Street roundabout (bottom right) ... 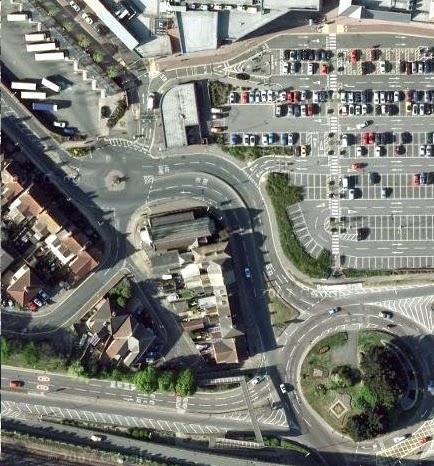 ... which provides a near-certain hold-up at almost any time of day. 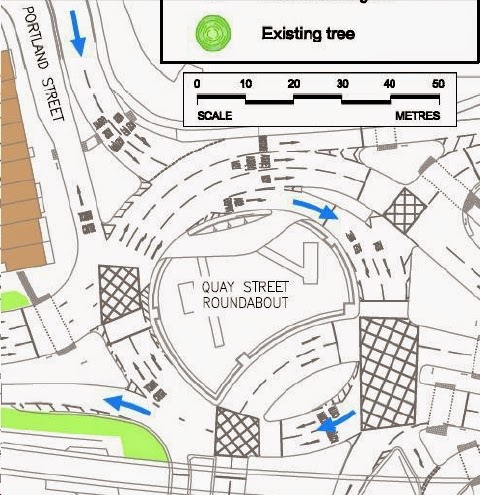 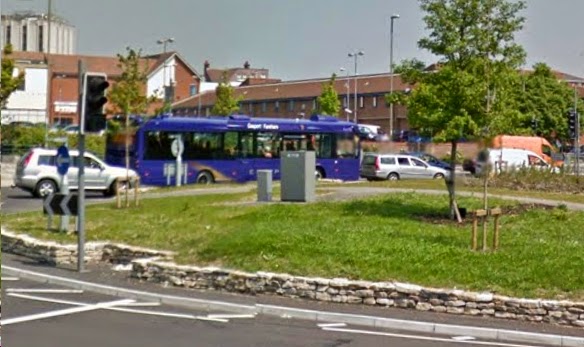 But now here is Hampshire County Council's cunning plan. Divert the buses via the old Western Road before that wiggle starts wiggling ... 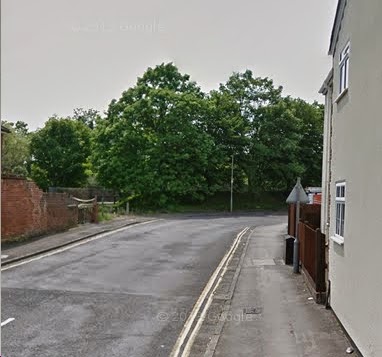 ... bash a hole through trees and grassy bank and install lights and a bus gate to let Eclipse buses (and others) out onto Western Way. 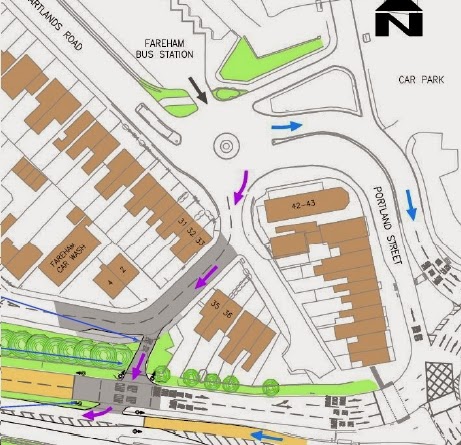 Now they can neatly by-pass the horrid hold-up roundabout by following the purple arrows. Additionally, the existing bus lane on Western Way itself ... 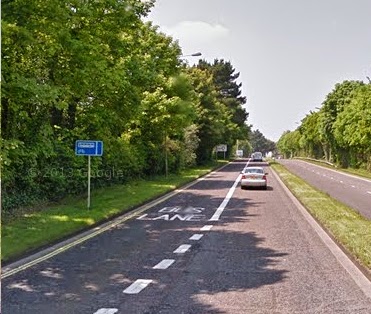 ... is being moved left to create a third lane. This will be good for non-bus traffic (?) but the Brucie Bonus is that the new bus lane (below, shaded puce) will provide a cloggage-free exit on to the station stop. 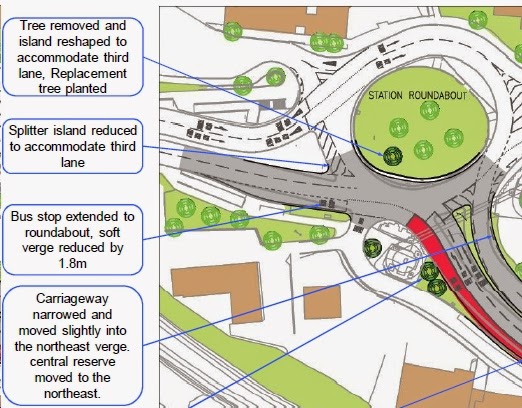 So fbb missed the birthday ... 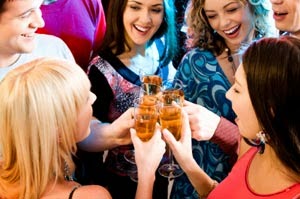 ... wasn't even invited to the party and forgot to send a card. [Sadly, there wasn't a party!]

We will have to limit ourselves to a slice of imaginary cake and a hearty three cheers for the Busway [a week late!]. 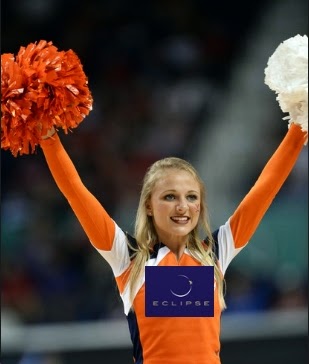 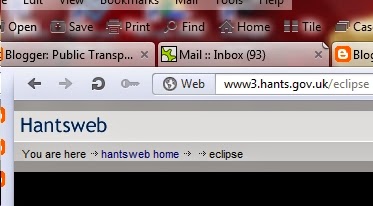