Although the film title was "Another Fine Mess" ... 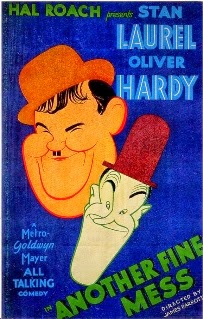 ... the original quote was "Well, here's another nice mess you've gotten me into," but fbb will stick to "fine" for reasons that will become obvious.

There are three road bridges in central York of which the most distinctive is Lendal Bridge, providing the main route between Station and Minster. Until 1861 there was a rope-ferry where the bridge now stands. 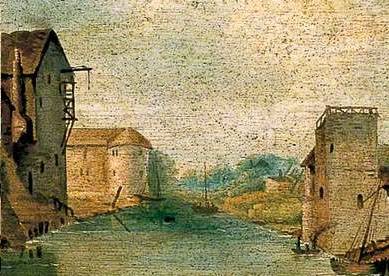 This was the ferry used by Florence Nightingale when she visited York en route to Castle Howard in 1852. 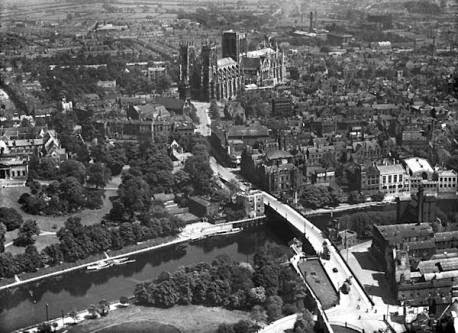 At both ends of the present (1861) bridge there are towers, Barker Tower to the west and Lendal Tower to the east. Its engineer was Thomas Page, who also designed London's Westminster Bridge. It has a single span of 53 metres. It was the second attempt to build a bridge here. The first, begun in 1860 by William Dredge, collapsed during construction, and five workmen were killed.

The bridge has always been busy as here in 1960. 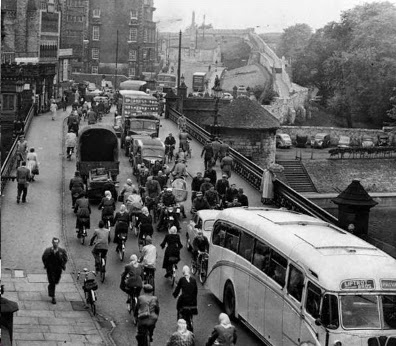 It remains a major bottleneck in a very congested city. But the Council had a cunning plan.
Close it to all vehicles and send them the long way round the inner ring road! 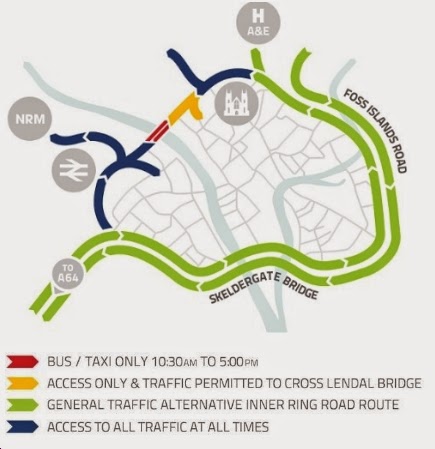 In the end this drastic plan was modified to a 1030 to 1700 ban on everything except buses and taxis. Whilst this would do nothing for peak hour chaos, it would reduce usage during the day and make the route more pleasant for pedestrians. Certainly the bus operators were adamant that the route was essential. The benefit of the experimental scheme is that this beautiful bridge, with magnificent views of the River Ouse ... 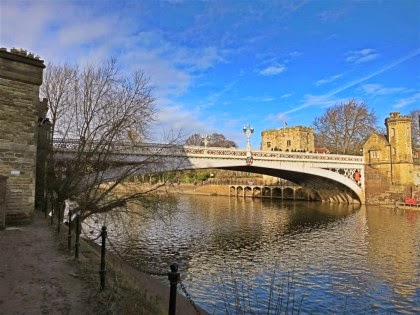 ... has become a pleasant place for a stroll, rather than a steady battle against noise, exhaust fumes and possible death from crossing the road! 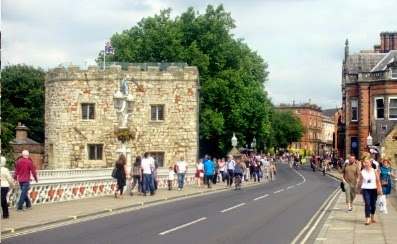 But from the very start of the project there have been vociferous objections from York's so-called beleaguered motorists. Additionally, the business community was less than ecstatic. 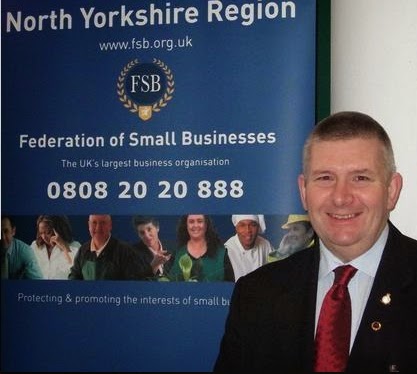 Simon Williams, chairman of the North Yorkshire branch of the Federation of Small Businesses, said the bridge closure would not reduce traffic levels in York. "We're still going to get congestion, we're just moving it to different areas of the city. It's also going to affect businesses in that people may say they're not going to come to York as it's too difficult." 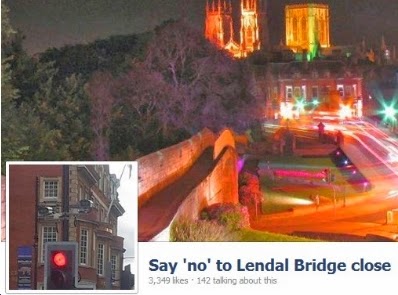 Political debate became a Party issue with Conservative and Liberal councillors railing against the Labour majority.

Conservative Leader Cllr. Ian Gillies has called for an end to the Lendal Bridge closure experiment prior to its scheduled conclusion in February saying that statistics have shown that the trial is not working. He said, “Whilst I do not criticise the administration for trying something new, the recently published statistics show there have been no appreciable gains in any of the areas such as bus journey times and usage where the Council was anticipating improvement, while on the other hand problems have been stacking up all over the City.”

The experiment came to an end officially on February 27th but the restrictions were to remain in force until the May council meeting to allow time for a "full evaluation" of the scheme. All interested parties, pro and con, had been preparing their predictable views until Messrs Stephen Knapp and Simon Rhodes threw a substantial spanner into the works on Tuesday last, April 1st.

A new livery variant launched in Leicester on Thursday last. 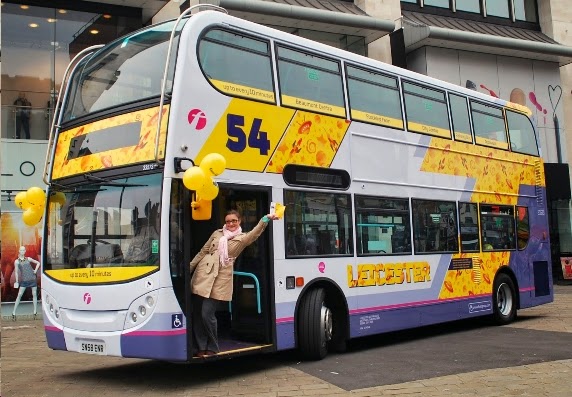 And in case you wondered. You did wonder, didn't you?

Following a £5.9million investment in December 2013 which saw 35 newer buses introduced to their fleet, First Leicester has been working on a new concept that looks to connect the cultural and historical roots of the city with the people and places of Leicester as it is today. Each of the company’s 13 routes will have a specially designed theme that is associated with the city. The first three routes to be launched cover Leicester’s involvement in space research and technology, the work of Leicester born designer Ernest Gimson and Leicester’s heritage as a centre of hosiery and textile industry. 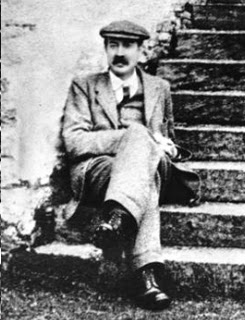 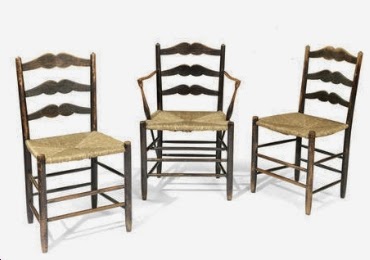 Gimson was described by the art critic Nikolaus Pevsner as "the greatest of the English architect-designers". Today his reputation is securely established as one of the most influential designers of the English Arts and Crafts movement in the late nineteenth and early twentieth centuries.

It won't be long before every First Bus bus will be in different livery; O.K., if not bus, certainly bus route. Corporate identity - Phooey!