Back in the 60s, fbb remembers a policy of Sheffield Transport Department. "Get the buses running", the boss said, "as soon as the roads are ready. Then as the people move in, there will be a bus service in place." And. indeed, this policy was operated until at least the mid 70s. fbb well remembers riding on the first service 52 via the Badger Estate ... 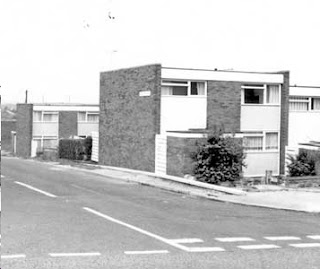 ... with roads caked in builders detritus and lined with building materials, concrete mixers et al. But the buses were there, ready and as willing as Mr Barkis**, to greet the newcomers. 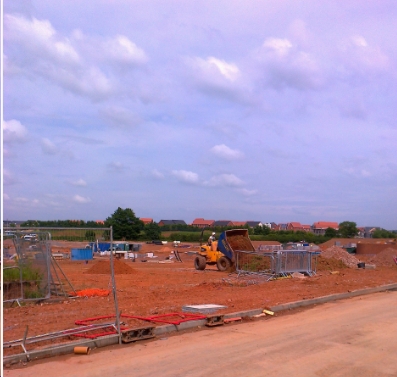 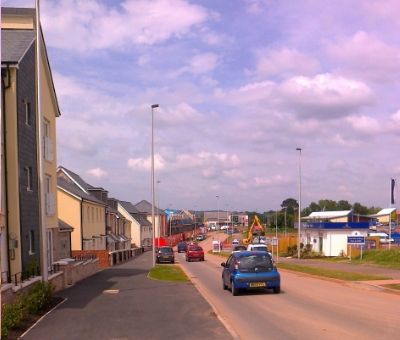 The first phase of the "new town" is shown on the stagecoach route map for its revised services. 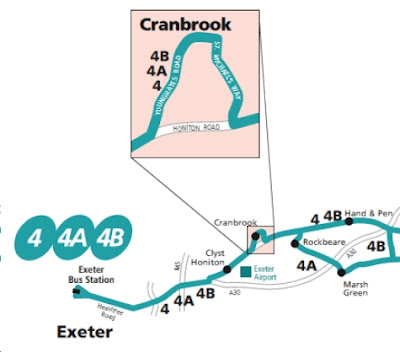 Ironically, there are only two marked stops; one at the junction of Younghayes Road and Honiton Road (left in the enlargement above), and the other at the other end of the Cranbrook diversion, almost back on the original route. In between, there is nothing to capture the bus travelling imagination of the potential passenger.

Neither can you find a posted timetable! 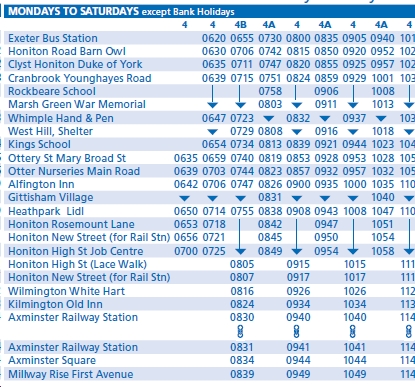 Buses via the new development run every 30 minutes with the addition of evening journeys to Cranbrook only. Buses to Ottery St Mary increase from hourly to every 30 minutes, Honiton gets a half hourly service replacing a journey every two hours; a fourfold increase!! Axminster journeys are now hourly instead of one every two hours.

For previous services 60A and 380 see yesterday's blog (read again)

None of this detailed information is available at the stops where all we have is a simple (but large print!) departure list. 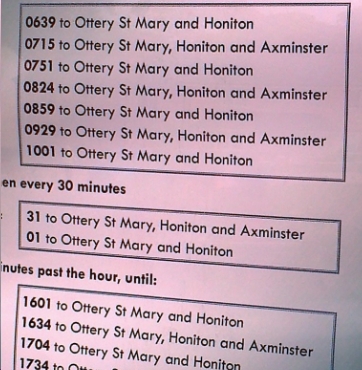 Whilst a useful "aide memoire" for regular users, this ignores the different routes of the 4 and 4A and offers no guidance as to when you might arrive at Ottery, Honiton or Axminster.

When fbb visited (on a hot afternoon on Monday of this week) he observed one bus in each direction, mid afternoon.

Yes, I remember the Cranbrook stop --
The name, because one afternoon
Of heat the service 4 drew up there
Unwontedly. It was mid June. 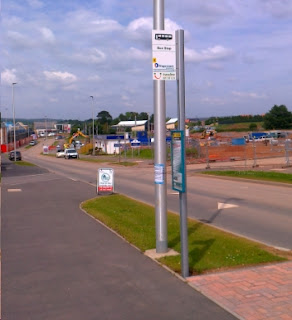 The brakes hissed. Someone cleared his throat.
No one left and no one came
At the bare bus stop. What I saw
Was just the stop -- only the name 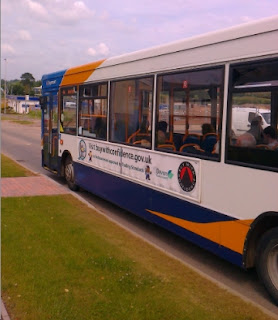 And builders, dump-trucks, and dust,
No meadowsweet, no haycocks dry,
No whit less still and lonely fair
Than the high cloudlets in the sky.

And for that minute a JCB roared
Close by, and round it, mistier,
Farther and farther, all the builders
Were toiling in lovely Devonshire.

The poem is a slightly (!) revised version of "Adlestrop" by Edward Thomas (1878 to 1917); originally describing a call at the long-gone railway station.

The new services are, however, a superb effort to get buses in place (there is also a new school now open) as the people move in. But, looking back at earlier blogs this week, several questions arise in the agile mind of fbb. 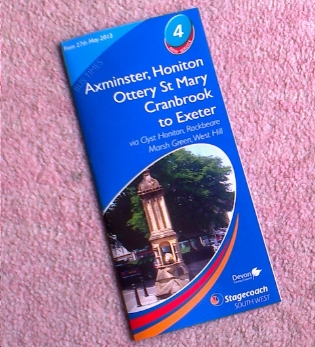 2. Are there heaps of same in all the developers' swanky sales offices?

3. Will every house get a bundle of "free travel" vouchers for an "introductory offer"?

** Mr Barkis : fbb blogs are always ready to delve into Classic Literature for their allusions and illustrations. Mr. Barkis is an aloof carter in Charles Dickens' "David Copperfield" who declares his intention to marry Peggotty. He says to David: "Tell her, 'Barkis is willin'; just so." He is a bit of a miser, and hides his surprisingly vast liquid wealth in a plain box labelled "Old Clothes". He bequeaths to Peggotty and her family (including David) the then astronomical sum of £3,000 when he dies about ten years later.

Next Bus Blog : Saturday 22nd June
Posted by fatbusbloke at 02:00