That's him on the telly, him who reads the news!

The BBC Press Office announced in November 2006 that Nicholas Owen had signed to BBC News as a presenter. Owen's last broadcast on ITV was the ITV Evening News on 7 February 2007, and he took up his BBC News post on 3 March 2007. Owen regularly presents the Sunday 9am-1pm shift on the BBC News channel, as well as being a main relief presenter for the BBC Weekend News on BBC One. 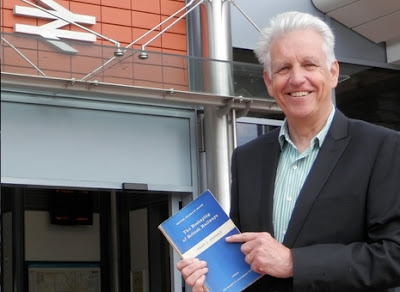 Nicholas Owen has a passion for railways, and has written books on the Brighton Belle and the history of the trolleybus.

Owen provides the voiceover on the Tramlink in Croydon, telling passengers where the tram is going, and what the next stop is. Owen is a Vice Patron of the Bluebell Railway's project to extend the line towards East Grinstead, and in November 2008 was the public face of the project (now completed) to remove 96,000 cubic metres (3,400,000 cu ft) of domestic waste from Imberhorne cutting. 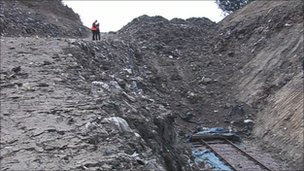 He can sometimes be found driving trains for the Volk's Railway, (the oldest electric line in the world) in Brighton. 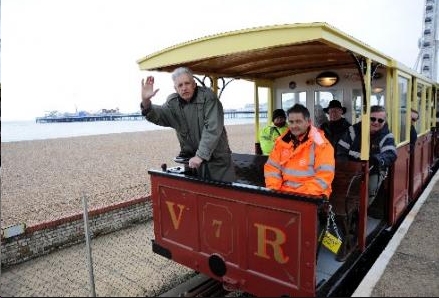 So, yesterday (Sunday 9th June) old Nick, together with fbb's Northampton correspondent and 298 others, travelled from Waterloo to Axminster where he performed a naming ceremony as pre-announced by the "Devon Life" web site. 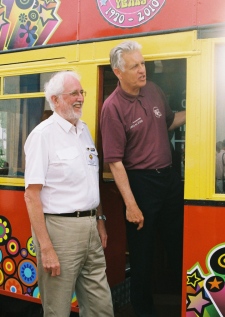 Hmm? One of their diesel locomotives? 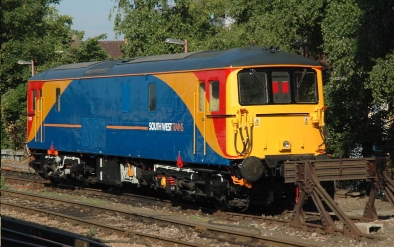 They've only got one and it's only half a diesel and half electric; available as a rescue locomotive. But read on and we will discover more from "Devon Life":-

"The naming event begins on arrival of the special class 159 locomotive from London Waterloo, carrying a party of 300 "guests" ...

Online bookings have now closed. You can book by phone and collect your ticket(s) on the train, or simply turn up and pay on the day! Standard Class seats are still available online at £43.50 including coach transfer Axminster to Seaton and tram rides as you wish.

Dear "Devon Life" : a "locomotive" is a big metal box on wheels packed full with a huge engine. It pulls trucks or carriages which can't go anywhere unless they have a locomotive to pull them. A "class 159" is a diesel "multiple unit" consisting of three coaches with engines and other clever stuff hidden under the floor. Here is one ... 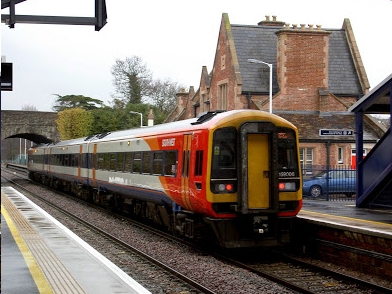 ... at Axminster Station. And, please note "Devon Life", it doesn't have a locomotive at the front (or even at the back!).

The main Car Show will be in the Underfleet car park in Seaton, with trade stands and entertainment at Colyton. Before the passengers return by road to Axminster Station in the afternoon to board the newly named “Seaton Tramway” loco back to London, Nicholas Owen will also present winners with Trophies at the Classic Car Show.

Perhaps not the most accurate journalism from "Devon Life" but a good day out nevertheless. Tomorrow we examine Northampton Alan's scheduling challenge; how to get to London Waterloo from Northampton early on Sunday morning to catch the "special" at 0840. 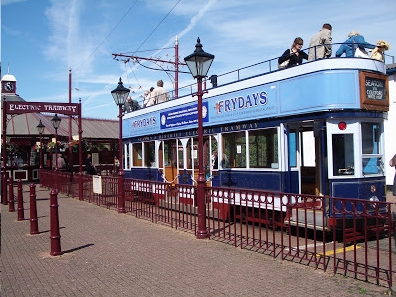 And all that latter excitement is just along the road from "fbb towers". Thus, tomorrow, we take a quick look round at this special event. The tram pictured above carries an advertisement for "Frydays" take-away and sit-in Chippy, by appointment to, and highly recommended by, fbb and Mrs fbb. 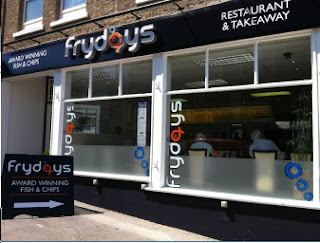 We have level access for the disabled
and offer a senior citizens Special of Cod & Chips
(inc. Pot of Tea or Coffee)
at a reduced cost in our restaurant.

Next Bus/Tram/Train Blog : Tuesday 11th June
Posted by fatbusbloke at 02:00